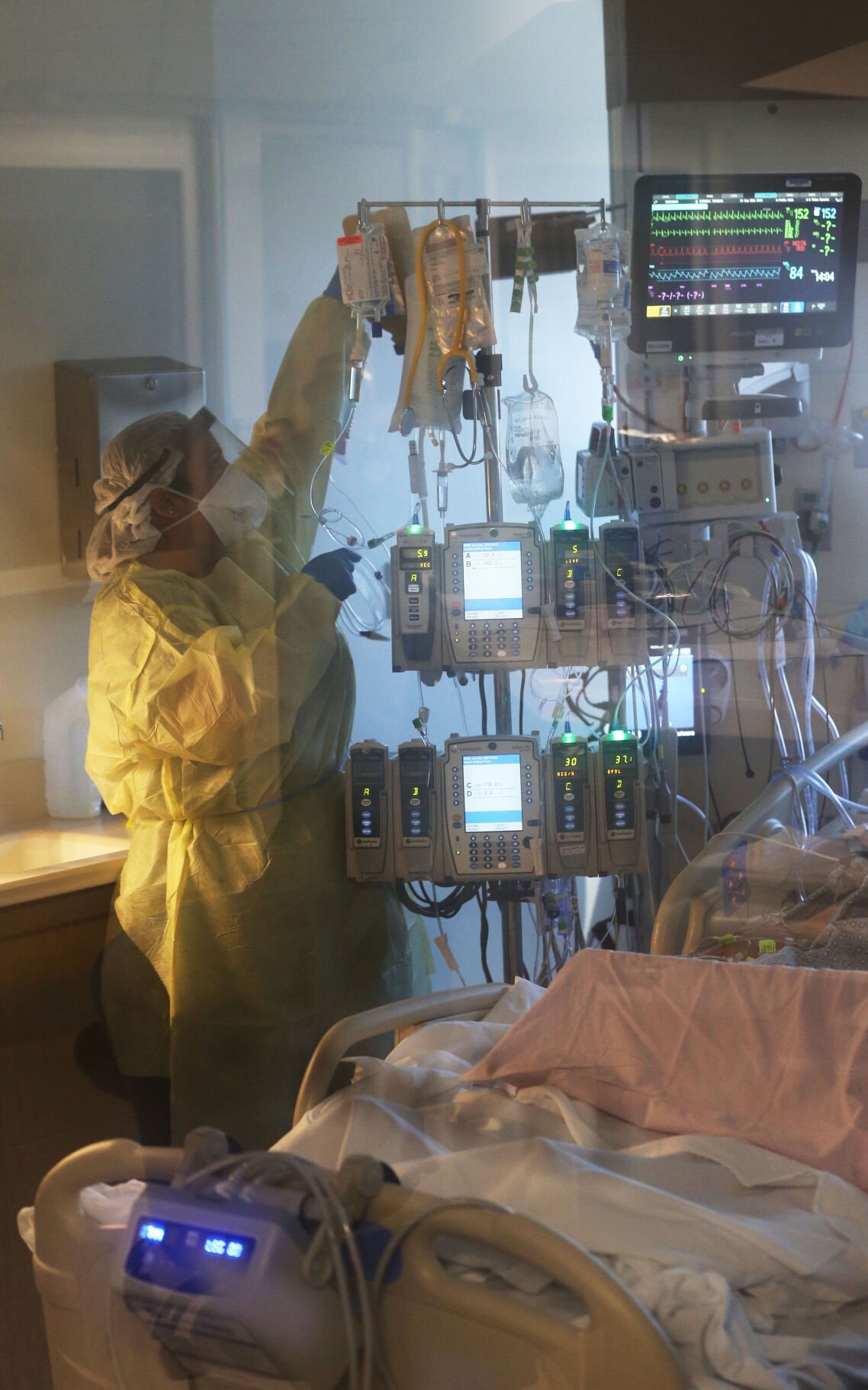 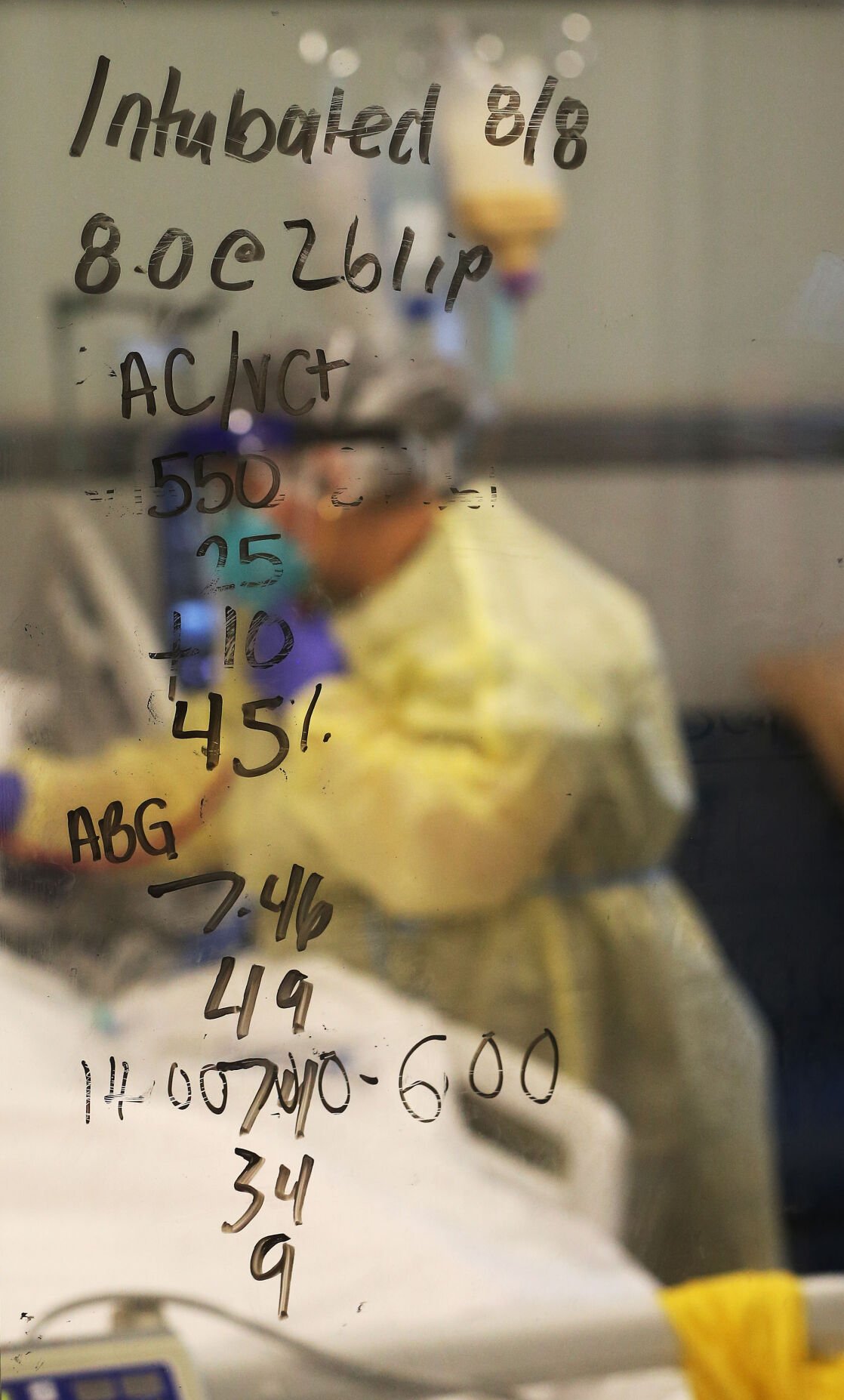 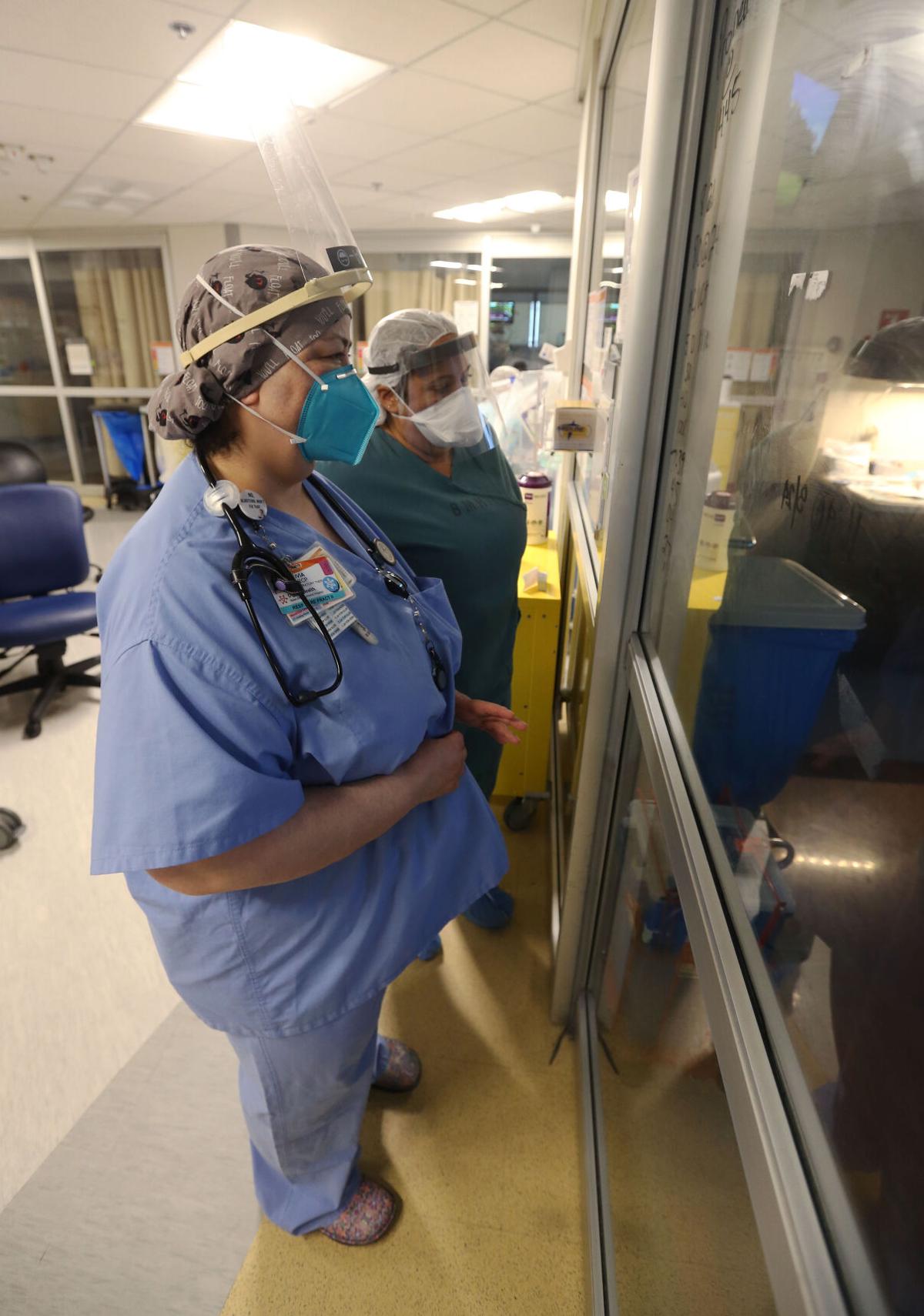 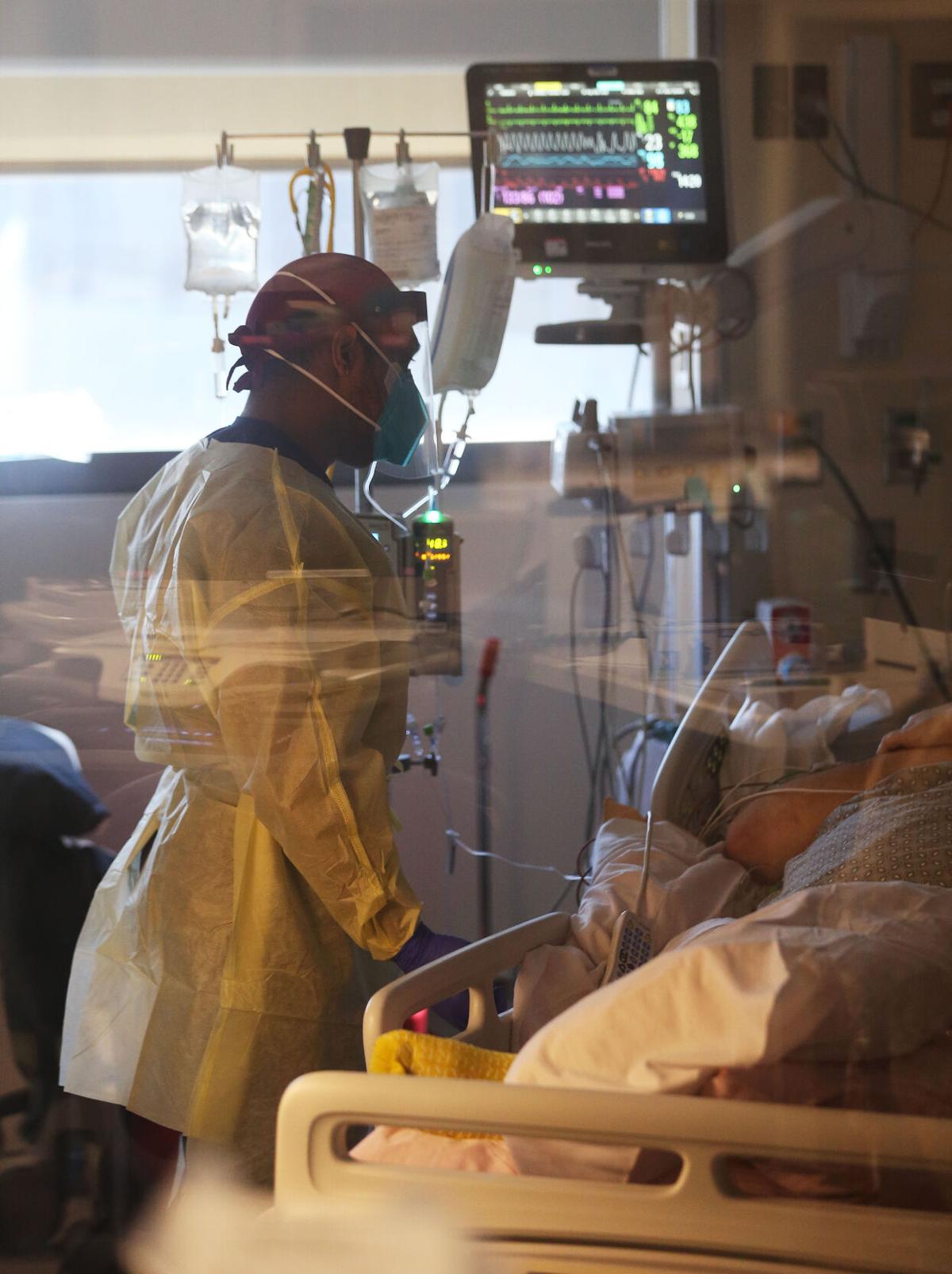 Memorial Hospital registered nurse Harrpreet Rai talks with a patient he is caring for in the medical center's COVID-19 intensive care unit on Tuesday.

Memorial Hospital registered nurse Harrpreet Rai gloves up before caring for a patient in the medical center's COVID-19 intensive care unit on Tuesday. 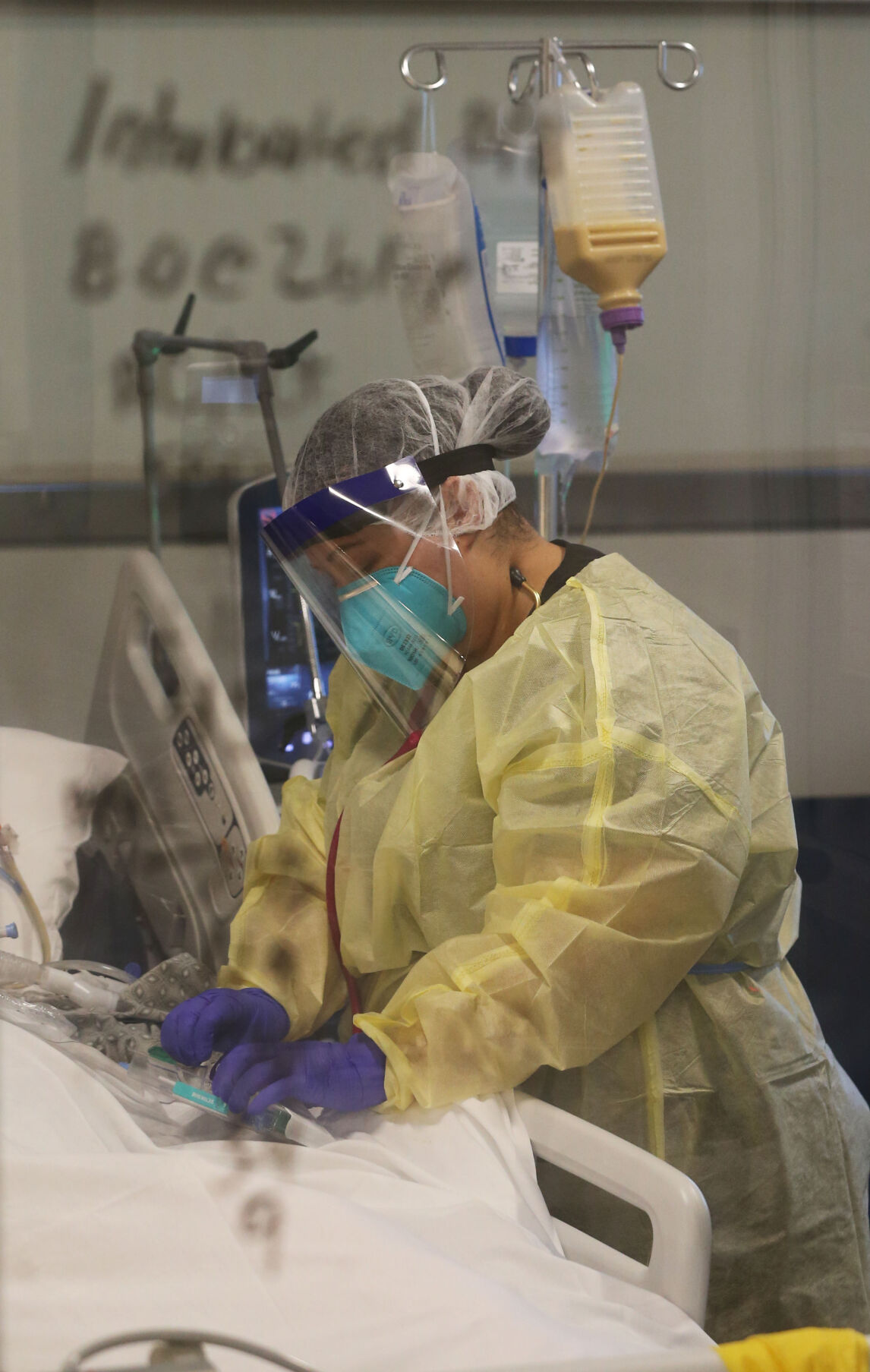 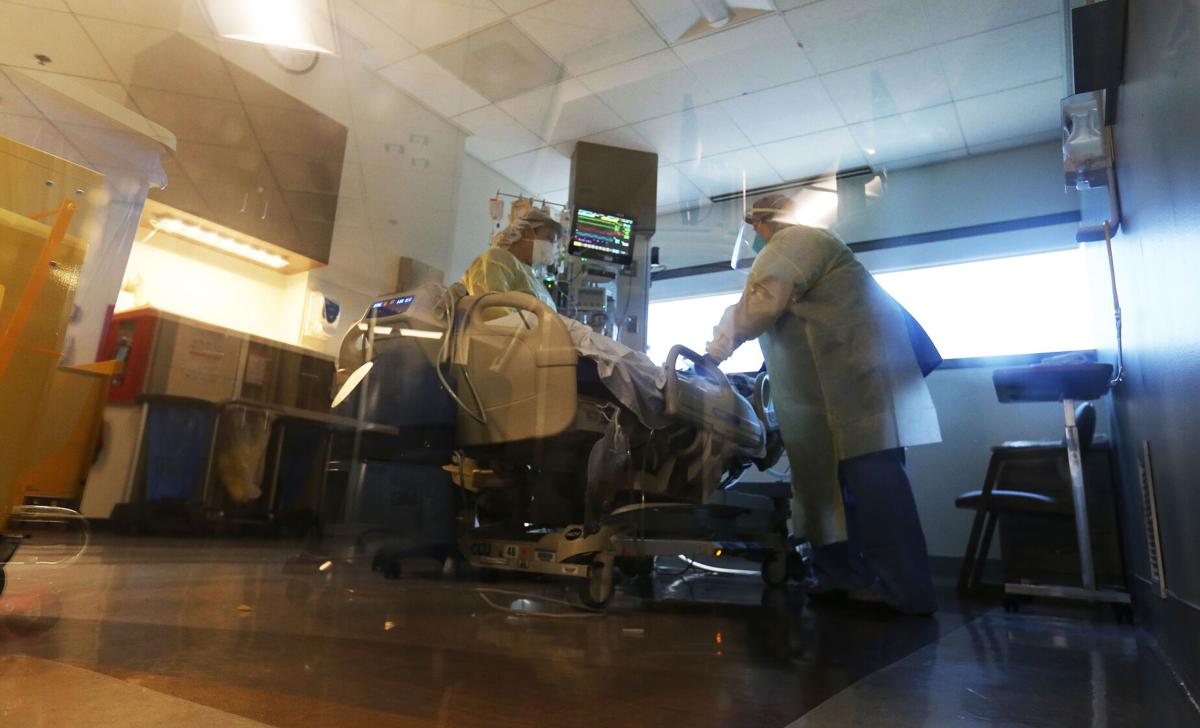 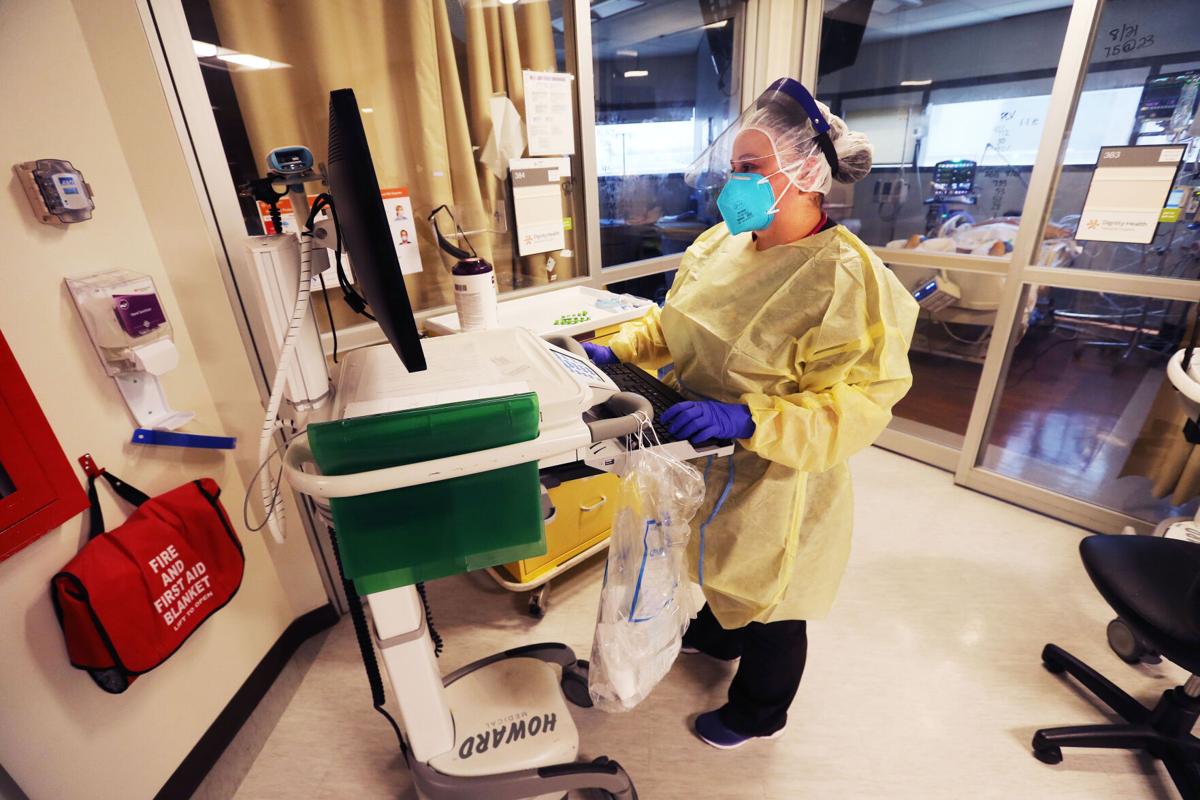 Memorial Hospital registered nurse Harrpreet Rai talks with a patient he is caring for in the medical center's COVID-19 intensive care unit on Tuesday.

Memorial Hospital registered nurse Harrpreet Rai gloves up before caring for a patient in the medical center's COVID-19 intensive care unit on Tuesday.

Local hospital executives worry they might not be able to staff enough beds to meet official projections that COVID-19 cases in Kern County will continue rising through early October.

Although the volume of cases remains below its peak early this year, hospital staffing levels have plummeted as more and more employees burn out, retire or leave the state. Executives say those who remain are overworked and that contracted nurses from outside the area have become much harder to find.

"We're nervous right now," Bakersfield Memorial President and CEO Ken Keller said Tuesday. "We're not necessarily critical yet but that could change within a week or so based on the dynamics as (hospitalizations) continue to grow."

The number of Kern County inpatients who have tested positive for the coronavirus has climbed dramatically in the past month, on Tuesday reaching 236, or 17 percent above the two-week rolling average. State data shows that figure never topped 50 between early April and July 20.

Meanwhile, the number of infected patients in Kern being treated in an intensive-care unit — 48 as of Tuesday — is at its highest since late February, according to the state.

Local availability of intensive care-unit beds continues to fluctuate dramatically, partly because it reflects demand combined with current staffing. On Tuesday it stood at 36; it was 30 on Sunday and 68 on Aug. 17.

ICU availability at individual hospitals was not available, and Kern Medical declined to comment on its status.

Adventist Health simply said it is seeing an increase in COVID-19 cases and that its ICUs in Bakersfield, Delano and Tehachapi "are impacted."

"We have surge plans in place at each location should we need to expand our ICU beds," spokeswoman Megan Simpson said by email.

Bakersfield Memorial's chief nursing officer, Terri Church, said the hospital is doing all it can to make as many ICU beds available as possible by postponing elective medical procedures, asking employees to work overtime and extra shifts, even asking nurses to come back out of retirement.

But the task has become extraordinarily challenging, she said, because so many former employees have left, in some cases for less stressful jobs in outpatient care. Never has she seen so many people leave hospital employment in such a short time.

Memorial's total count of traveling nurses was between 116 and 120 in January, she said. Lately it's just 67 and she's trying but has been unable to get many more.

One looming concern is that all health-care professionals working in the state must be fully vaccinated by Sept. 30. Church said the latest update she has is that a little more than 50 percent of Memorial's staff is fully vaccinated.

"Even if we lost a few people (because they're not fully vaccinated), that's a few more people that we don't have. So, it's an interesting time," she said, adding that students returning to class and potentially bringing home the virus to family members and friends is another big concern for the weeks ahead.

One way the hospital is trying to cope is by focusing on moving discharges off campus as quickly as possible in order to free up inpatient beds.

Even so, Church noted that Memorial had two full ICUs operating during the January peak. Now, because of staffing limitations, she said, there's just one.

"When we don't have as many workers, it can feel just as bad" as the earlier surge in cases, she said.

At the same time, there's been an increase in chronically ill patients coming in for medical treatment, Church added. She was unable to explain the trend but theorized it's either the recently poor air quality or people are finally getting out of their houses and eating foods they should avoid, with the result being unusually crowded hospital emergency departments.

Keller, Memorial's top executive, said the "severe shortage" of clinical caregivers includes therapists, technicians and support workers — and that based on conversations he has had with other hospital chiefs, the shortfall is "literally across the entire community."

He said he's worried there won't be enough to handle the county's official prediction that the total number of COVID-19 cases in Kern won't begin to subside until early October.

"I'm going to be a little pessimist," he said, "and say that the peak will be a little higher than we have the capacity to support."

The situation is fluid and local hospitals do have fall-back plans to open more ICU beds if the supply gets uncomfortably tight, he said. Plus, local medical centers are better prepared than they were a year ago because many lessons have been learned since then.

His best advice was to get inoculated.

"I respect people's opinions on what to do and how to do it," he said. "But my own personal belief is, the best measure to help to prevent … the disease, reduce the acuity of the disease and stay safe for your family is to get vaccinated."

Local hospitals have suffered in some cases heavy financial hits from the pandemic, with most of Kern's largest medical centers taking in less…