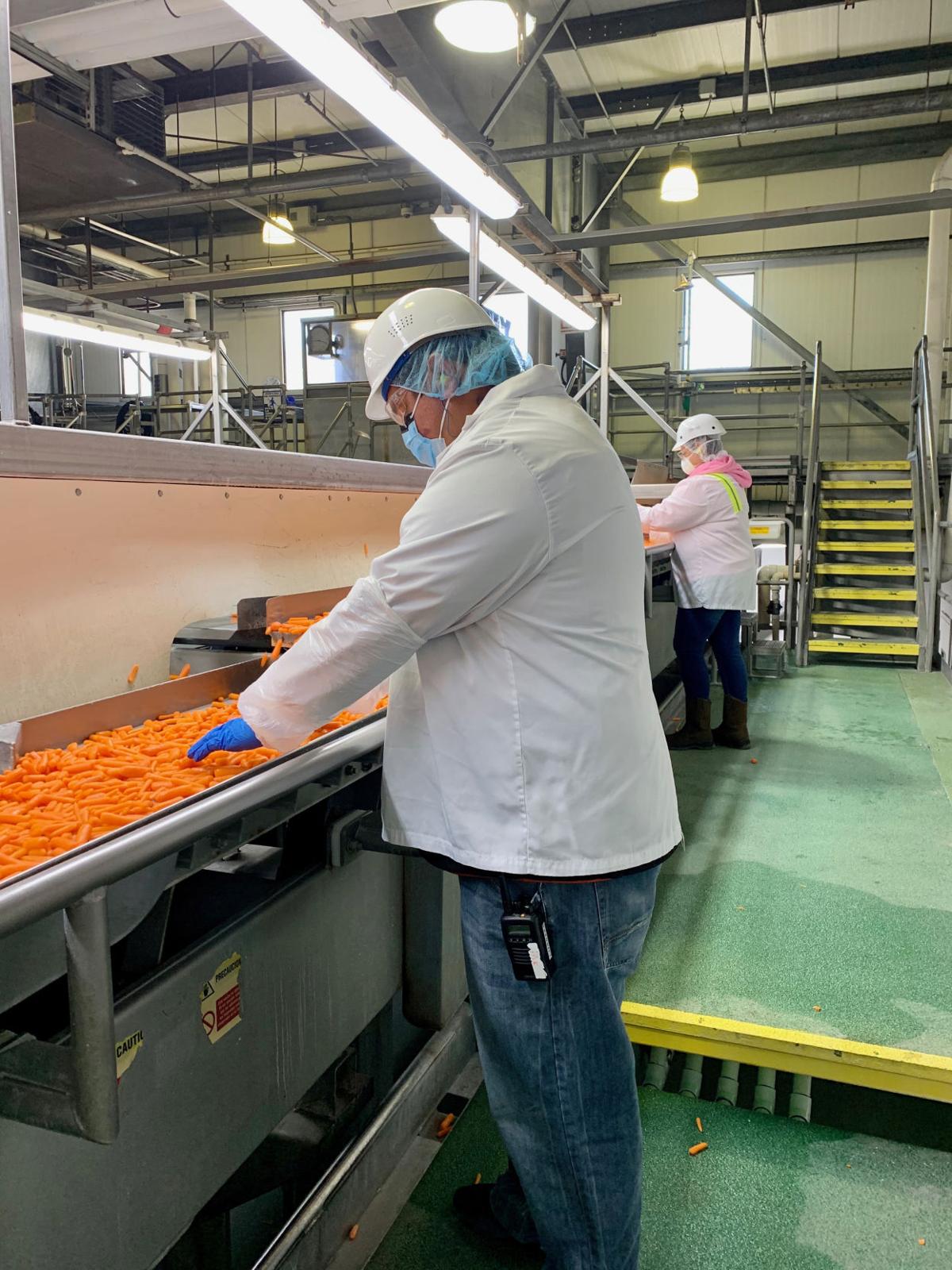 Workers on a Bolthouse Farms production line during the COVID-19 pandemic. 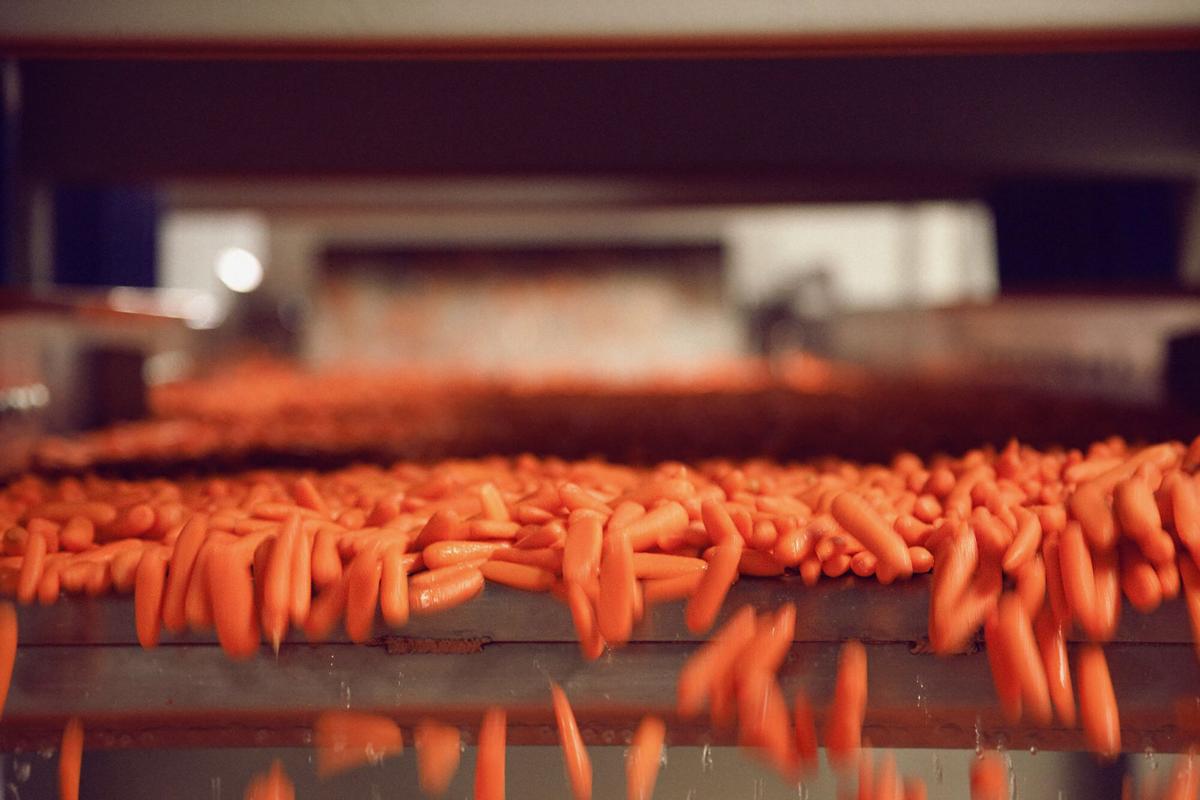 Bakersfield-based Bolthouse Farms is one of the nation's biggest producers and processors of carrots.

Workers on a Bolthouse Farms production line during the COVID-19 pandemic.

Bakersfield-based Bolthouse Farms is one of the nation's biggest producers and processors of carrots.

Two major Kern County food producers said Monday they are taking new steps to contain the spread of the novel coronavirus after employees of theirs tested positive for COVID-19.

Bakersfield-based carrot giant Bolthouse Farms reported that two of its local workers have tested positive. Competitor Grimmway Farms would not say how many of its employees have contracted the virus, though it confirmed at least one COVID-19 case and implied that more than one department has been affected.

Both companies said they have instituted extensive protocols for protecting their employees, including asking them to wear masks and taking the temperature of everyone entering their facilities.

Some online commenters have been critical of Grimmway's initial response to the crisis, saying the company should do more to protect workers.

Guidelines published online by the U.S. Food and Drug Administration say there is no evidence that food, food containers or food packaging has contributed to the spread of COVID-19. But it has not ruled out the possibility that food production can contribute to the transmission of the disease.

"Like other viruses, it is possible that the virus that causes COVID-19 can survive on surfaces or objects," the FDA states. "For that reason, it is critical to follow the four key steps of food safety — clean, separate, cook, and chill.”

Agriculture and food processing operations are specifically exempted from the stay-at-home orders California has put in place during the coronavirus crisis. That means people involved in growing, harvesting, processing or shipping food are allowed to leave home and go to work at a time when others are required to self-quarantine.

Cal-OSHA said companies whose employees become sick after likely exposure to COVID-19 at work must report the situation to the agency.

It recommends such employers notify co-workers if an employee has tested positive for the disease, making sure to protect the stricken worker's identity, then conduct a deep cleaning of the work areas that may have been exposed.

A Cal-OSHA spokesman said the agency has not been notified of any outbreak involving Bolthouse or Grimmway.

Bolthouse CEO Jeff Dunn said by email Monday that the company responded to the positive test results of two employees by accelerating their medical care and limiting exposure to other workers.

He said that in addition to instituting fever checks and having company technical and medical experts review the latest guidelines from the federal Centers for Disease Control and Prevention, Bolthouse has:

• limited employees' interaction by separating workers into groups of 10 or fewer;

• asked employees to wear face masks starting this week, though the company does not yet have enough protective gear for all employees;

• given pay raises to essential production and agriculture personnel.

Grimmway, for its part, said through a spokeswoman that its preparations for COVID-19 started in February, before Kern's first case was announced.

When the company learned of a positive test result in its shipping department, "we took immediate and drastic action to confine exposure almost exclusively to that department," it said by email.

Other steps Grimmway said it has taken to limit the virus' spread include:

• requiring that any meetings and training sessions be conducted electronically whenever possible instead of in-person;

• sending people to work from home whenever possible;

• allowing employees time off to care for children at home as necessary;

• instructing workers to stay home if they have COVID-19 symptoms; and,

I won't be eating or drinking anything from those two companies for a long while. If a business can't or won't enforce the protection policies then it deserves to go under. There's always another source of food to be had.

Neither business will go under, JR.

Does that mean you're boycotting Albertson's and Trader Joe's as well?

They had employees test positive as well...

cut copy paste NPR New White House Chief of Staff Mark Meadows is working with Agriculture Secretary Sonny Perdue to see how to reduce wage rates for foreign guest workers on American farms, in order to help U.S. farmers struggling during the coronavirus, according to U.S. officials and sources familiar with the plans.

Opponents of the plan argue it will hurt vulnerable workers and depress domestic wages.

The measure is the latest effort being pushed by the U.S. Department of Agriculture to help U.S farmers who say they are struggling amid disruptions in the agricultural supply chain compounded by the outbreak; the industry was already hurting because of President Trump's tariff war with China.

It's not "cut copy paste", it's either Cut and Paste or Copy and Paste.

The second option is redundant and wastes time; just wanted to help you do it more often and faster... :)

these big companies are surprising slow learners........sipping too much of tea with Donald

So Yorkies, it's the company's fault if an employee comes to work (possibly asymptomatic) ill?

What is your solution- stop food production?

Please- enlighten the CEOs of these "big companies"...