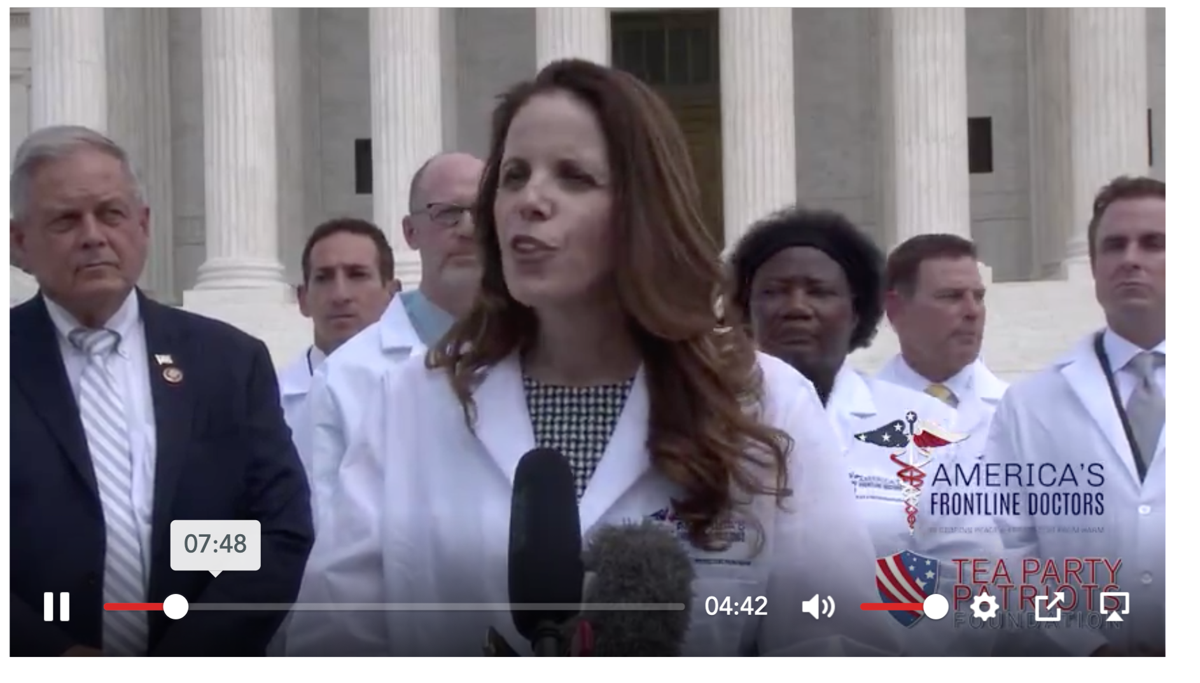 Dr. Simone Gold in a recent video that attracted millions of views in which she spoke about hydroxychloroquine along with other doctors affiliated with her group, America's Frontline Doctors. Gold practices at Adventist Health Bakersfield under a contract the hospital has with a physicians group. 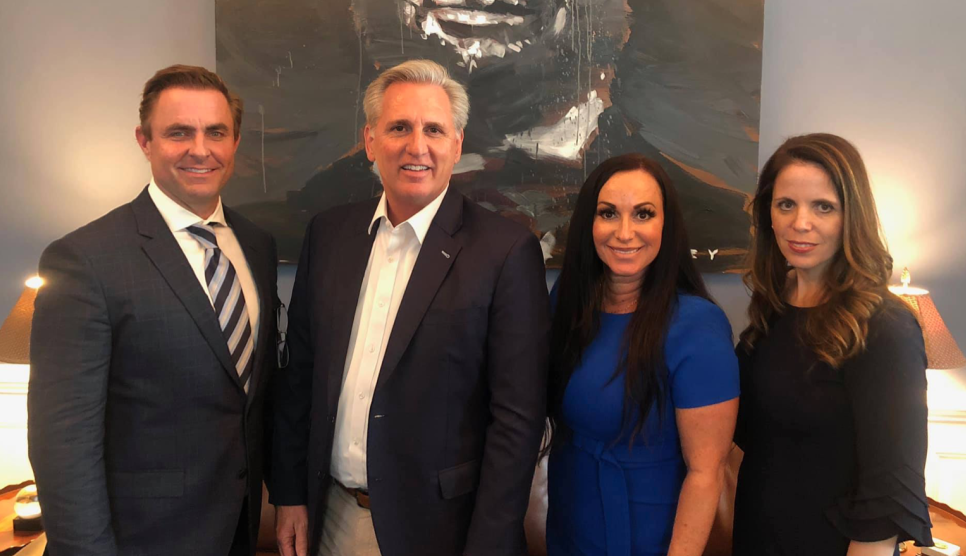 Dr. Simone Gold in a recent video that attracted millions of views in which she spoke about hydroxychloroquine along with other doctors affiliated with her group, America's Frontline Doctors. Gold practices at Adventist Health Bakersfield under a contract the hospital has with a physicians group.

As hundreds of new COVID-19 cases were being reported daily and Bakersfield hospitals were filling to capacity two weeks ago, two local doctors and their Bakersfield marketing representative were in the nation's capital sharing controversial claims about the virus in a video on the steps of the U.S. Supreme Court.

The video was retweeted by President Donald Trump and his son, Donald Trump Jr., and spread like wildfire online, garnering millions of views before it was removed by Facebook, Twitter and YouTube for what the social media companies said was spreading misinformation about the coronavirus. It featured a dozen doctors who were part of a group called America's Frontline Doctors, wearing white coats and taking turns promoting hydroxychloroquine for treatment of COVID-19 and downplaying precautions like mask-wearing and shutdowns to stem the spread of the virus. The doctors gave their names but provided few details about where they work.

Among them were Dan Erickson and Simone Gold, who both practice in Bakersfield, and off-camera was Angela Barton, who owns a local marketing company.

Erickson gained widespread attention in April when he and a business partner, both physicians and owners in a chain of urgent care clinics, said that the coronavirus was no more serious than the flu and that lockdowns weren't necessary. A video of those statements was also widely spread on social media and later taken down by YouTube.

Erickson told The Californian on Saturday that the D.C. trip also included a less publicized six-hour information session where the doctors shared research on their respective fields. He said he spoke during the session about the negative impacts of the shutdown orders on people with mental illness, family violence, suicide and substance abuse problems. He said video from that meeting was also removed from social media.

"We're dealing with a topic where there's been a lot of inconsistency. I think everybody can see that," Erickson said of the virus. "What we haven't heard from in our society is physicians. ... So we got doctors from all over the country to say what are you telling patients. We're the people actually dealing with this ... and here's what we found."

Erickson said the group also met with multiple senators and officials while in D.C., including House Minority Leader Kevin McCarthy, to talk about medical care in general and provide physicians' perspectives on the pandemic.

Asked last week about the doctors event in D.C., McCarthy responded in a statement: “Americans have a right to express their beliefs and opinions. During this pandemic, I believe people should be informed and practice the best precautions, including social distancing and mask guidelines."

Gold, who featured prominently in the video at the U.S. Supreme Court and founded the America's Frontline Doctors group, works in the emergency department at Adventist Health Bakersfield. The hospital said last week Gold is part of its medical staff through a contract the hospital has with physicians group Sound Physicians Emergency Medicine of Southern California, PC. Sound Physicians confirmed Gold has worked for the group as a part-time, independent contractor.

In the video, Gold promoted the use of hydroxychloroquine as an effective treatment for the virus and decried efforts to prevent doctors from prescribing it. Gold also questioned the need for masks.

While some small initial studies appeared to show positive results with hydroxychloroquine, a more recent large-scale trial showed the drug had no added benefit to COVID-19 patients in comparison to standard treatment, according to the Food and Drug Administration and Dr. Anthony Fauci, a White House adviser on COVID-19 and the director of the National Institute of Allergy and Infectious Diseases. The FDA also says there "ongoing reports of serious cardiac adverse events" associated with the drug's use.

“On trials that are valid, that were randomized and controlled in the proper way, all of those trials show consistently that hydroxychloroquine is not effective in the treatment of coronavirus disease or COVID-19,” Fauci said during an interview on MSNBC on July 29. President Trump, however, has continued to tout the drug as effective against the virus.

Gold has spoken on Fox News and other conservative talk shows since the D.C. news conference, saying that she was given a hard time by her employer for prescribing hydroxychloroquine and was fired from her job after she appeared in the video. The Californian could not independently confirm her firing.

Doctors from other parts of the country also spoke in the video, including Houston-based doctor Stella Immanuel, who claimed hydroxychloroquine was a cure for COVID-19.

Immanuel was later linked to religious videos posted on YouTube in which she talked about alien DNA being used in medical treatments and witches and demons being responsible for certain medical conditions.

ERICKSON’S TAKE ON THE VIRUS

In the interview with The Californian on Saturday, Erickson stuck by his statements in late April that COVID-19 is no worse than the flu despite a massive uptick in the virus locally and nationwide.

Back then, Kern County had about 1,000 cases of COVID-19, 30 virus-related hospitalizations and four deaths. As of Saturday, local cases exceeded 22,000, hospitalizations were at about 270, and deaths stood at 171, according to state and county data.

"What I told people back in April was that most people we test and follow have minimal symptoms and almost all of them get better with no hospitalization," Erickson said. "That was true in April, that's true today."

Erickson's chain of Accelerated Urgent Care locations were among the first medical establishments in Kern County to test for the virus. He said the company has done 28,000 COVID-19 tests so far with about a 15 percent positive rate.

Erickson said local hospital CEOs he's spoken to say COVID-19 accounts for about 15 percent of hospitalizations. Hospital leaders recently told The Californian there is a rise in both COVID-19 and non-virus-related hospitalizations. However, the message from public health officials has always been that virus cases must be kept at bay so hospitals aren't overwhelmed as they are now and can continue to care for all patients who need hospitalization.

Erickson said he feels fear has gripped American society and people are scared to seek medical treatment for non-COVID issues. He is also alarmed by efforts to undermine the doctor-patient relationship and by the inconsistencies in government mandates related to the virus.

He mentioned signs recently posted on beaches in Southern California that said masks were required by law.

"Your freedoms and your republic are under attack," he said.

The video and the doctors in it appear to have connections with conservative groups. It aired live on Breitbart News and featured an introduction from a founder of Tea Party Patriots, a political organization known for its affiliation with the tea party movement and other conservative groups and its role in mobilizing opposition at healthcare town halls held throughout the county in 2009.

The Associated Press in May reported on a leaked call between the Trump campaign and a conservative group with ties to Tea Party Patriots in which an effort was discussed to recruit doctors who support President Trump's push to reopen the economy.

Barton Marketing Group, which lists local Republican groups among its clients on its website, helped develop a marketing strategy for America's Frontline Doctors.

"Barton Marketing Group was hired to raise brand awareness for (America's Frontline Doctors), in which we were successful," Barton said in the statement.

A post on the marketing company's Facebook page said the company "created a strategy to support the goals, including ground work such as logo design and apparel, and further elevated the (America's Frontline Doctors) platform with social media networking and management, video production and global media attention."

The Facebook post also features behind-the-scenes photos of the event in D.C. and a photo of Barton, Gold and Erickson standing with McCarthy.

McCarthy spokeswoman Brittany Martinez said of the photo: "The Congressman enjoys meeting with constituents, and listens to a variety of beliefs and opinions.”

Before COVID-19 was even detected in the United States, Dan Erickson, a former emergency room physician who now co-owns Accelerated Urgent Car…