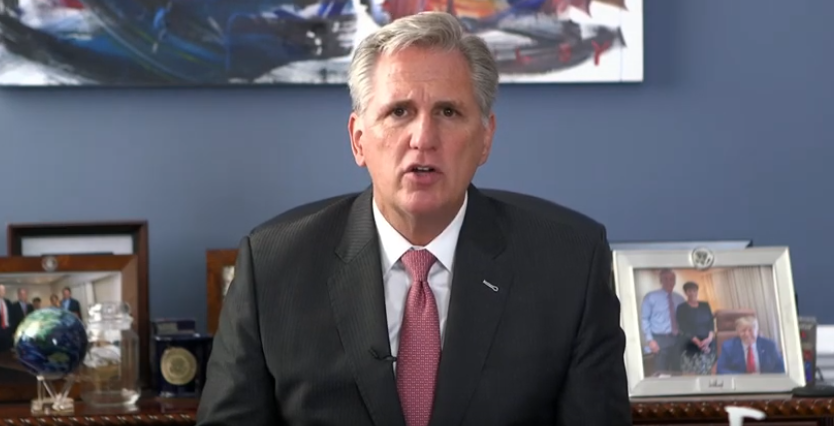 Only at its most basic level is California's 23rd Congressional District race about the choice between incumbent Kevin McCarthy, one of the nation's most powerful Republicans, and his Democratic challenger, U.S. Air Force veteran Kim Mangone.

When voters from Porterville to Lancaster cast their ballots Nov. 3, it'll be as much about President Donald Trump's performance — and McCarthy's supporting role — as it will be a referendum on the House minority leader's accomplishments on behalf of his constituents back home, or whether Mangone could do a better job.

Campaign money flowing into the race from outside the district speaks to a similarly outward-looking dynamic. McCarthy has raised a considerable war chest he is spending not so much on himself as on other races important to regaining Republican control of the House.

Meanwhile, Mangone's modest haul — at $486,753 a mere 3 percent of McCarthy's total as of June 30, according to the Center for Responsive Politics — is buoyed by outsiders pouring in money to pressure the incumbent to stand up to alleged voter suppression by Republicans around the country.

Will the race be close? Observers say probably not: McCarthy is well known in a district that leans strongly Republican and pro-Trump. In the March primaries he beat Mangone by a 2-to-1 margin.

There's a sense among Democrats, though, that progress is being made against a 13-year congressman some accuse of putting national politics ahead of the region's best interests.

Ivy Cargile, an assistant professor of political science at Cal State Bakersfield, said 2020 could be the year support for McCarthy slips among local Democrats and the 22 percent of voters in the district who don't affiliate with any political party.

"This can be the beginning of that," she said.

Robin Walters, president of Democratic Women of Kern, the county's largest Democratic Club, noted Mangone has already raised more money than any of McCarthy's previous congressional challengers. But she still sees it as an uphill battle.

"I think a lot of it is just moving the needle," Walters said.

The Kern County Republican Party did not respond to repeated requests for comment on the 23rd District race.

McCarthy, a proud and vocal Trump supporter, points to many recent accomplishments on the district's behalf. He said he worked to bring in $3.5 billion to repair China Lake Naval Air Weapons Station, cooperated with Democrats on water infrastructure legislation and landed $2 million for the fight against valley fever.

McCarthy acknowledges his sights are also on national politics. He takes credit for helping recruit a record number of women Republican congressional candidates and said there's a "really good chance" Republicans will retake control of the House, which with the backing of the House Republican Conference would make him Speaker of the House and third in line to the presidency.

Plus, McCarthy says his support for Trump is often helpful for the 23rd District.

"It doesn't mean I'm going to win all the time," he said, "but (it) means Kern County has a voice at the table."

Mangone, a former systems engineer living in Quartz Hill, contends McCarthy's work for his district has been unimpressive. She blames Trump as well as McCarthy for high unemployment, what she deems an incohesive national strategy for fighting COVID-19 and the 2017 tax reform package that benefited the wealthy more than others.

If elected, Mangone said she would promote job training to make sure local renewable energy positions go to local workers. She also talked about fighting for Social Security, engineering a solution to the Central Valley's growing thirst for irrigation water and working toward bipartisan consensus.

"I don't think that because someone's a Republican or a Democrat … is a reason to not work with each other," she said.

On her side is a group called Voter Projection Project, which since its founding last year has raised more than $5 million from some 60,000 Americans across the country.

A strategist with VPP, Daniel Kedem, said the organization will spend a five-figure sum on local billboards, digital and print ads this election season to punish a Trump "yes man" who has allowed members of his party to suppress votes elsewhere.

"We're putting (McCarthy) on notice that he's not safe, that Californians are noticing, that we're not going to stand for it," he said.