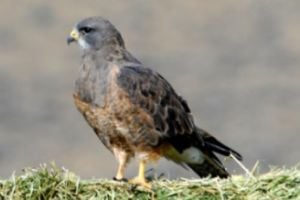 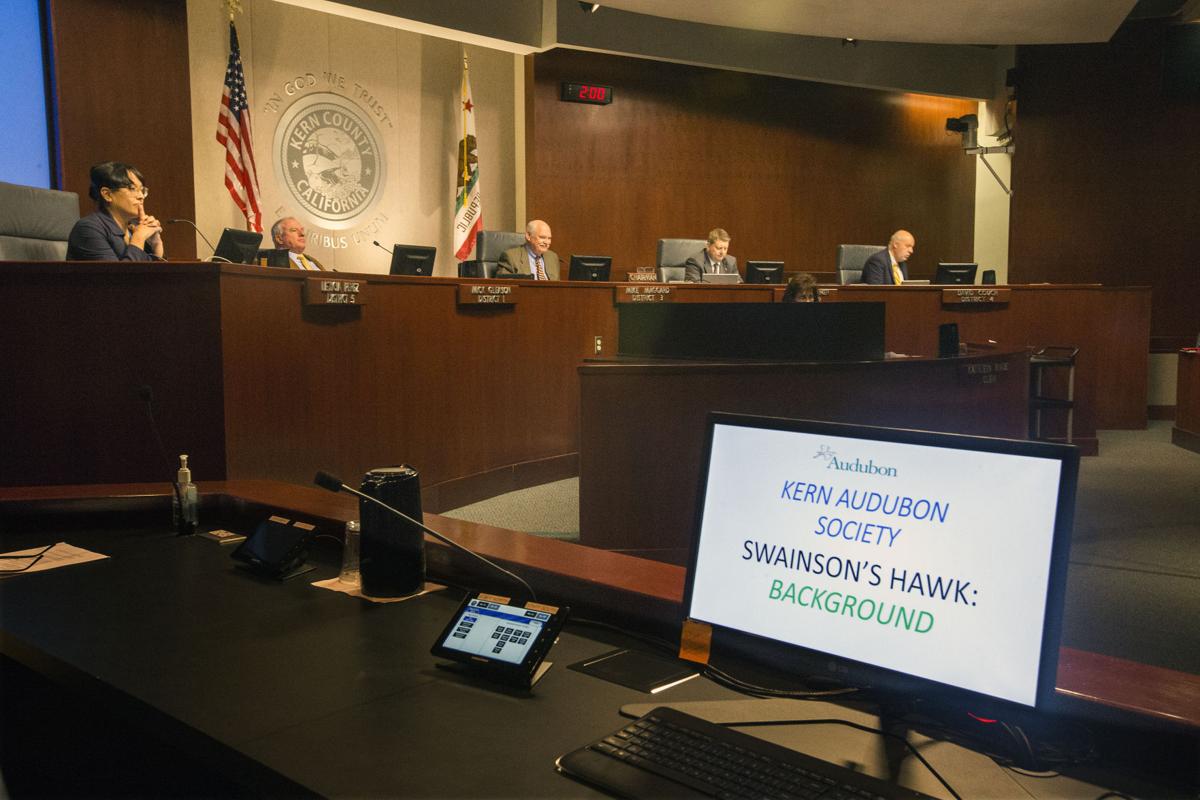 Kern County supervisors meet in March 2018 with a variety of items on the agenda, including a battle with environmentalists over mitigation money for the endangered Swainson's Hawk.

Kern County supervisors meet in March 2018 with a variety of items on the agenda, including a battle with environmentalists over mitigation money for the endangered Swainson's Hawk.

Nine years after Kern government agreed to seek out foraging habitat for hawks displaced by an Antelope Valley solar energy project, the county is still fending off accusations it mishandled the task and should never have gotten involved in the first place.

A hearing is set for Sept. 1 in Kern County Superior Court in a lawsuit two environmental groups filed three years ago alleging the county abused its discretion in setting up a series of property easements in the Central Valley intended to partially make up for environmental impacts caused by the 650-megawatt Antelope Valley Solar Project.

The county asserts many of the arguments being raised by the plaintiffs either misrepresent its obligations to help mitigate the solar project's impacts, or should have been challenged along with the project's 2011 environmental impact report and are therefore too late to be disputed in court.

The case has shone new light on what appears to be a novel arrangement under which Kern officials accepted more than $14 million from the project's developer with the understanding the county would take an active role in the solar farm's environmental mitigation — then kept almost $3 million for the county's general fund.

Plaintiffs the Sierra Club and the Center for Biological Diversity are not asking that the photovoltaic project's approval be set aside. Rather, they want the court to declare the county's mitigation efforts inadequate in hopes the work can be done instead by an outside organization with more experience in such matters.

"The county did something highly unusual and there's no obvious reason for it," said the Sierra Club's lawyer, Babak Naficy.

Kern's office of the County Counsel did not respond to a request for comment on the lawsuit.

Court records say San Jose-based solar-farm developer SunPower made attempts to set up easements on 2,732 acres of Antelope Valley farmland to compensate for foraging habitat that would be taken out by the development, which partly extends into Los Angeles County.

The land was expected to provide opportunities for Swainson's hawk, a migratory bird that feeds on insects and small mammals. The raptor has been listed as a threatened species under the California Endangered Species Act.

When SunPower failed to secure agreements with farmland owners in the Antelope Valley, it agreed in 2012 to give $14.3 million to Kern County so it could do its own negotiations to make up for the project's impacts.

County officials thought they had struck an easement deal in the Lake Isabella area but the transaction collapsed. After renewed efforts to secure suitable land in the Antelope fell through, the county was able to come to terms with six farmland owners in the valley portion of Kern.

The county moved forward with the arrangement after a March 2018 public hearing that raised many of the objections now being litigated in court.

Besides arguing the county has no experience setting up and managing similar kinds of easements, the environmental groups' lawsuit contends that, contrary to the requirements of the 2011 environment impact report, the county's property agreements do not offer foraging opportunities on farmland that is prime or of statewide importance.

It says there was land available for a proper easement in the Antelope Valley but that the county chose not to pay for it because it would have cost $8 million more than the amount paid by SunPower, and Kern officials did not want to tap general fund money to cover the difference.

The lawsuit says land the county secured was fallow with little or no suitable prey for the hawk and no known nests within the 10 miles required by mitigation measures included in the environmental review. What's more, it says the county's easements lacked provisions barring the use of insecticides and rodenticides that could harm Swainson's hawks.

Another point of contention is the term of the easements: The lawsuit says the easements should be permanent, not 30-year agreements as negotiated by the county.

A primary defense raised in a June brief filed by the county is that the lawsuit's primary arguments — that Kern lacks easement expertise, that they should be permanent and they must include a ban on pesticides and rodenticides — were addressed in the environmental review certified by the county 10 years ago.

"Each of these issues (was) known or knowable at the time that the original 2011 EIR was finalized and thus cannot form the basis of petitioners' current challenge," the county's brief stated.

The brief notes mitigation measures identified back then offered SunPower the option of setting up its own easements or participating in an agricultural land mitigation program adopted by the county.

It says the county was justified in looking for appropriate farmland outside the Antelope Valley because there was no suitable land available there, largely because of groundwater depletion and widespread abandonment of what had been productive farmland.

The county challenged the lawsuit's assertion that there was anything inappropriate about the county's efforts to set up the easements itself, saying that possibility was raised in the 2011 environmental review. It also said there was no knowing back then how much money the easements would cost.

Neither was there anything wrong with the land the county eventually found for the hawk to forage in, the county brief says. A hawk expert hired by the county said there was a strong likelihood a member of the species was active within 10 miles of at least one of the properties.

The county went on to challenge the plaintiffs' claim the farmland selected was not prime or of statewide importance. It argued as well there is no requirement that the easements be perpetual: If the solar project lasts more than 30 years, then it will need new or extended easements.

As far as pesticides and rodenticides, the county's brief said no evidence has been presented suggesting such treatments have been used on the properties or that they ever will be.