Larry Adams, 78, passed away last week. He was a beloved teacher and speech and debate coach who taught at Bakersfield High School and Emerson Junior High. 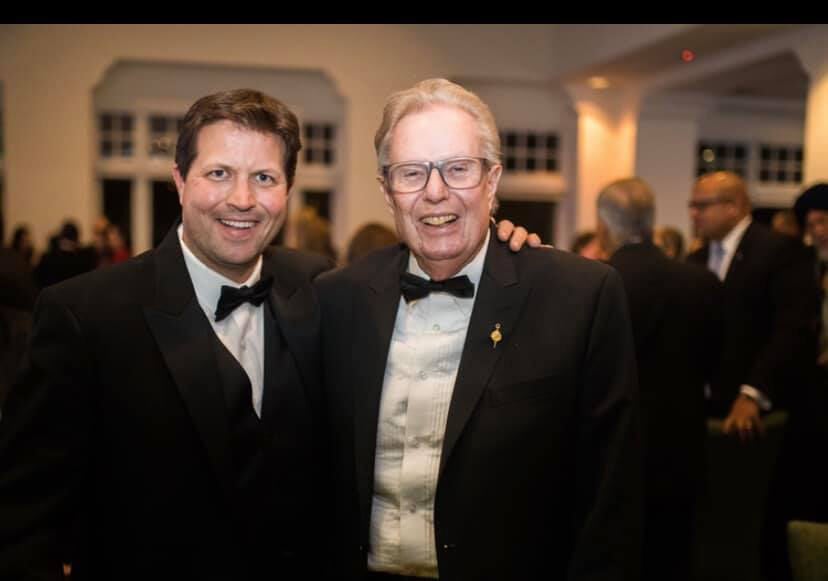 Larry Adams, right, with his son Jeremy Adams. Larry, 78, died last week and was a beloved teacher and speech and debate coach.

Larry Adams, 78, passed away last week. He was a beloved teacher and speech and debate coach who taught at Bakersfield High School and Emerson Junior High.

Larry Adams, right, with his son Jeremy Adams. Larry, 78, died last week and was a beloved teacher and speech and debate coach.

Larry Adams was a worldly and witty teacher who had high expectations for his students and even fellow colleagues, but he also gave a lot of himself after hours. The beloved English teacher at Bakersfield High School and Emerson Junior High died Thursday at 79.

His son Jeremy Adams, who teaches at BHS, said the cause of death was unclear. He said he's been inundated by messages and texts from his father's former students and that it's made him think deeply about his father's way of teaching.

"He made a profound impact on their lives," he said. "They understand that he cared about them by being tough and having high expectations."

Adams could be "old school" in some ways. He asked students to memorize Julius Caesar speeches or learn 40 vocabulary words weekly. He was interested in the Socratic method, and he would regularly challenge his students. He was a stickler for grammar.

"Larry did not care if you felt uncomfortable. He wanted to you learn," Jeremy said.

Clair Richards, a fellow English teacher at BHS, said Adams taught a unit on the history of the English language. It was difficult, but through it students gained a sense of accomplishment.

David Reese, a former principal of BHS, echoed the importance of high expectations to Adams — not just among students but among the English Department he chaired.

"Even though he might have come across as stern, he truly cared for his students and did everything he could to made sure they learned," Reese wrote. "He had a huge heart and was passionate about his school, students, family and young teachers just learning their craft."

Richards counted Adams as a mentor who was there when she began her teaching career. She said she's grateful that he allowed her to find her footing on her own terms.

"He let me be and figure out who I was as a young teacher," she said. "Because he had that trust and confidence, he changed the trajectory of my career."

Adams was a teacher, but he was also a lifelong learner who loved the idea of the Renaissance man. He had a master's degree in Chinese history and was knowledgeable about classical music. He was a voracious reader and he traveled the world.

In his 50s, he became interested in art history. Jeremy said he didn't receive a master's in the subject but he became fluent on the subject as if he had.

"He was a bit of an autodidact," Jeremy said.

Adams was a lifelong resident of Bakersfield, except for a stint overseas in the military.

Jeremy said there were signs of his father's competitive spirit at a young age. He was appointed to the position of drum major at North High.

Adams coached students in competitions all throughout his career, Jeremy said. When he taught at Emerson, he coached his students to victory in the Henry Greve Speech Contest, spelling bees and oral language festivals. Notably, he led BHS' speech and debate team to the state championship in 1988.

Lawyer Tim Scanlon, partner at Scanlon Duncan LLP, was on that team. Scanlon said that even before he began to attend BHS, Adams found him at a junior high speech tournament and encouraged him to try out for the team. That set him on an important path: Scanlon went on to attend the University of Missouri in Kansas City through a debate scholarship. College might not otherwise have been possible for him.

During his four years on the speech and debate team, Scanlon marveled at what Adams put into his work. Students would regularly go to his house to work on speeches, with his wife and son as the audience. The peak was when the team won a series of individual and group championships in 1988. Looking back, he realized how much Adams was sacrificing personally.

"But I look at the classmates I have now," he said. "It wasn’t in vain, it really helped a lot of those in our class that were successful."

Jeremy said that in a way Adams lived through the lives of his students. His family would laugh when he would brag about a student getting into a competitive college or medical school, as if it were his own accomplishment. Students were always returning to Adams to tell them what they were up to, years or decades later.

Richards said just a few weeks ago she received a call from a former student who had studied under Adams as a freshman. The former student, now a physician at the University of California, Davis, had recently won an award for his teaching. Though he had graduated in 1991, he still thought of Richards and Adams.

"One of the things he said was, 'Larry Adams taught me how to think,'" Richards said.

Because Adams was the teacher everyone would drop by to see, he felt to some like a community institution.

"He's one of those guys you assume will always just be there," Scanlon said. "It's a tough hit."

When Adams retired, he left a big absence on campus, Richards said. But he has a legacy that carries on through students and those he mentored.

Jeremy overlapped with his dad at BHS a few years before he retired. His dad passed on his podium and chair to Jeremy.

When he was teaching at that podium on Monday, he said he could feel his dad's presence.