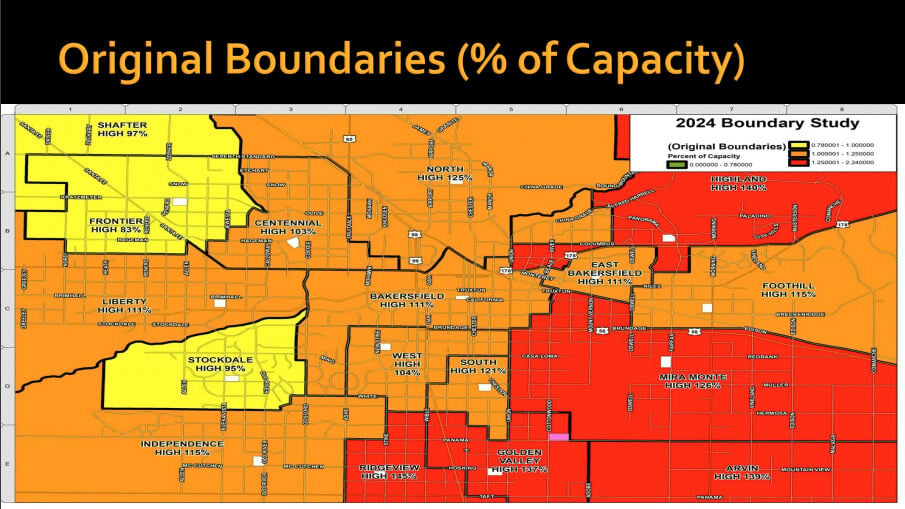 This graphic shared with the Kern High School District board shows where the most overcrowded high schools were in the district: largely the southeast and northeast but also the center of the city. The northwest and southwest have schools just under capacity. 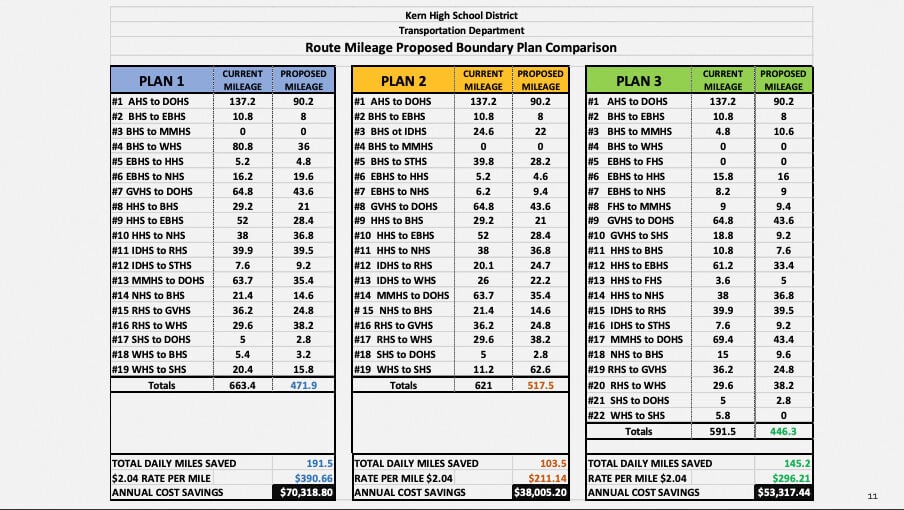 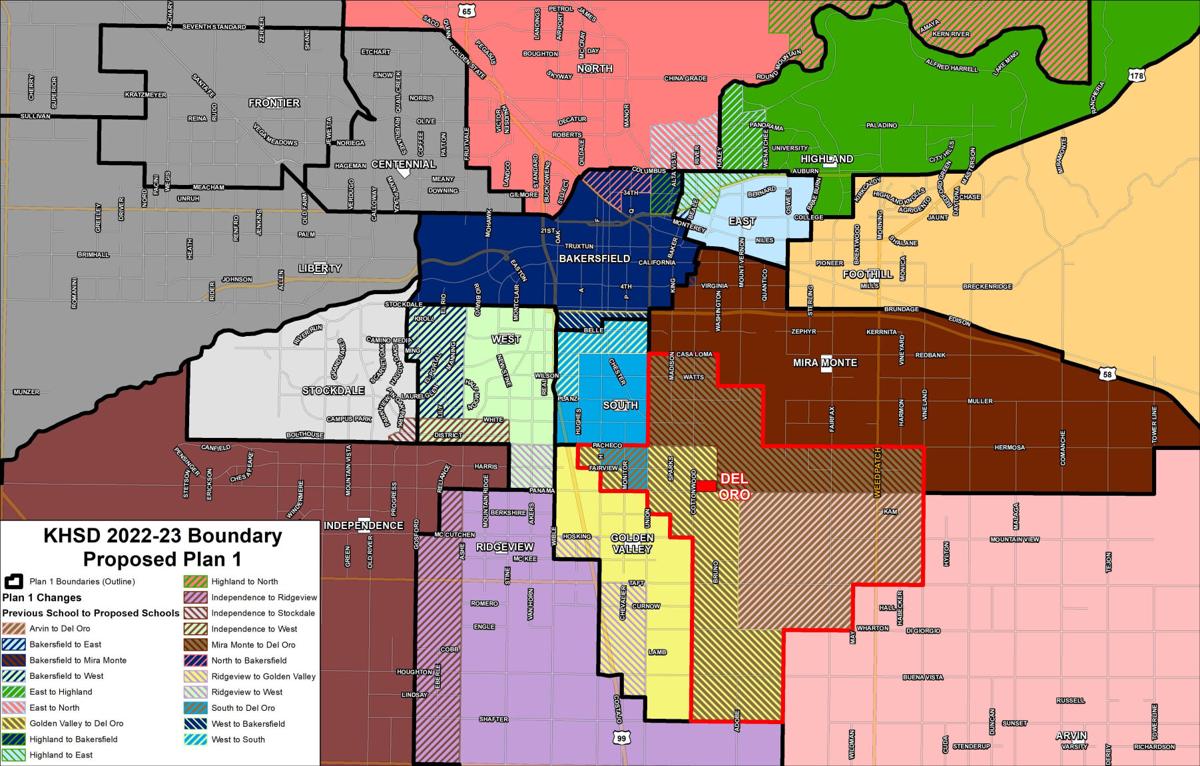 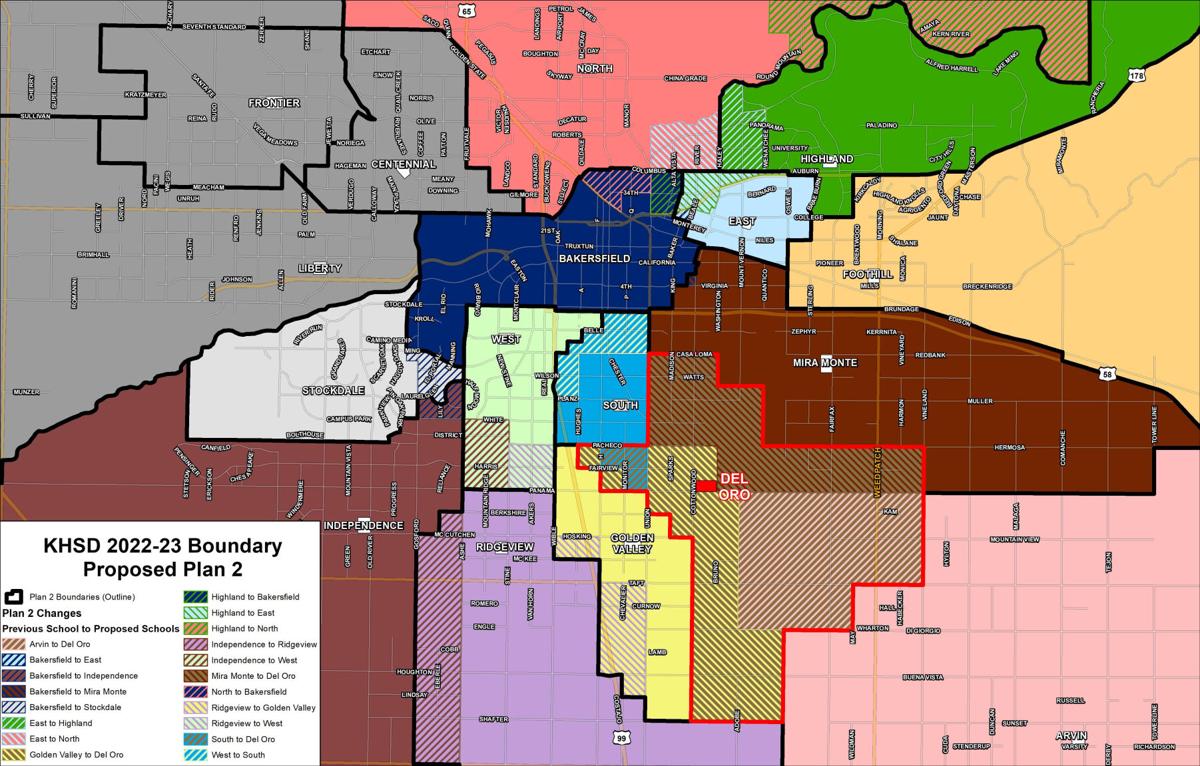 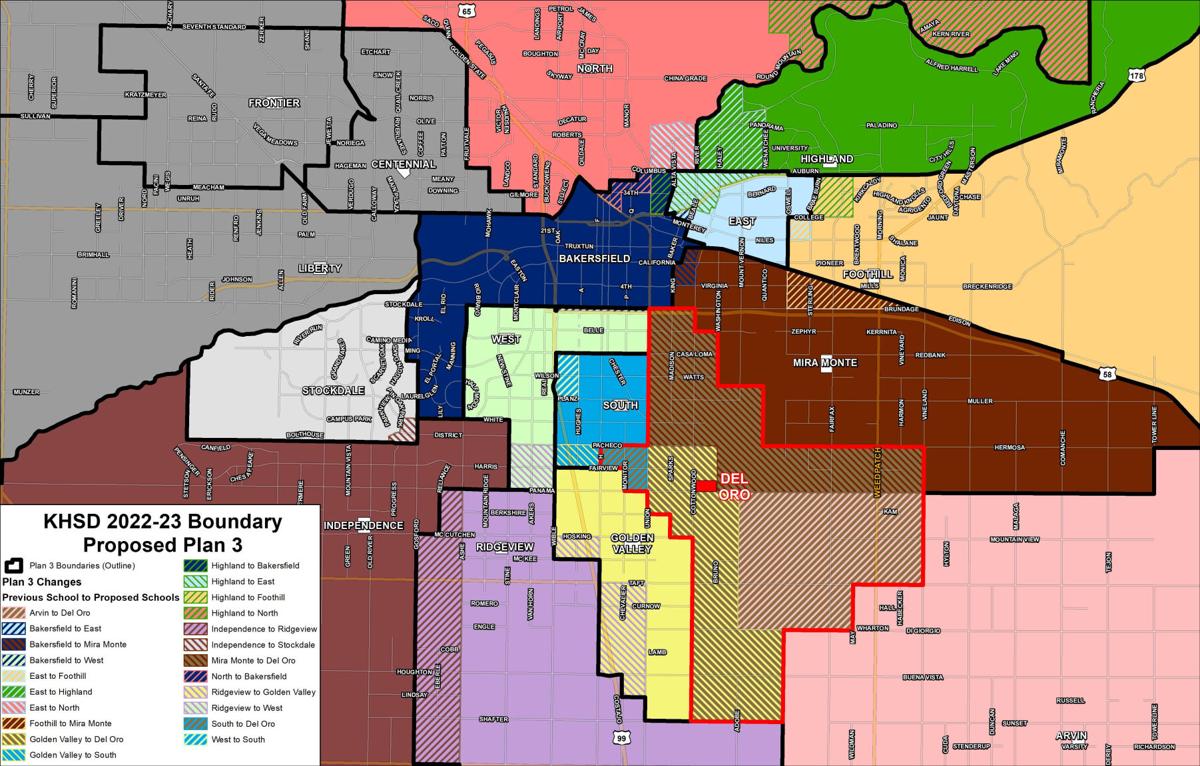 This graphic shared with the Kern High School District board shows where the most overcrowded high schools were in the district: largely the southeast and northeast but also the center of the city. The northwest and southwest have schools just under capacity.

After holding a series of public forums throughout the summer, the Kern High School District administration presented to the board Monday night its proposals to transform the district’s boundaries.

The proposals spurred by the opening of Del Oro High School in fall 2022 are the same three that the public had a chance to comment on throughout June and July. The only notable difference in Monday night’s presentation was the addition of data requested by the public and board members, such as how many students would be impacted and the effect on the transportation budget.

However, it is the last meeting for public comment before the trustees are scheduled to choose a final plan at the Sept. 7 meeting.

Monday night’s meeting was the first opportunity for trustees to speak on the proposals. None discussed any of the specific plans in any detail but a few did take the opportunity to comment on the process itself overseen by Ridgeview High Principal Roger Sanchez, who was most recently KHSD’s director of research and planning.

Trustee Bryan Batey told Sanchez that he didn’t realize that when the board had given the committee approval for boundary changes for Del Oro High School, it would end up impacting all of metro Bakersfield.

“I did not understand we were doing the entire town,” he told Sanchez.

Two proposals impact 13 of the district’s 18 high schools, and another impacts 14. On Monday, Sanchez shared more details about how many students would be impacted from each school. They’re all in the same ballpark, from Plan 3, which involves 5,767 students, to Plan 1, which involves 75 more students.

Sanchez told Batey what he’s said at every public forum: When the committee sat down to redraw the lines for Del Oro in the heavily overcrowded southeast part of the district, its members realized that now was the opportunity to relieve overcrowding in other parts of the district.

Sanchez shared a new graphic that shows where schools are overcrowded: the southeast and northeast have the heaviest overcrowding. He told the board that he tried to give them three distinct plans, so they would have different strategies for addressing a pressing issue that would be coming up soon without a new bond measure on the horizon.

Trustee David Manriquez noted that his area in the southeast part of the district will include Del Oro High School and other schools whose boundaries will be heavily reworked in every proposal. He said he’s heard from parents wondering why Highland High or Bakersfield High are being impacted when Del Oro is the reason for the boundary change. He cites the city’s rapid growth.

“It is just a domino effect, and we have to as adults and elected trustees, we have to think about what’s best for the 41,000 students and our parents in the long run,” he said.

One criticism that has come up at previous forums was the make-up and size of the boundary committee group. Sanchez said that the committee started out with 22 members and dwindled to 14 members by spring, which he largely attributes to COVID. Batey pressed Sanchez.

“You didn’t think that we needed a bigger committee when the committee chose to take on one of the most controversial moves in the last four years?” Batey asked.

“I’d have loved to have a larger committee, but I can only deal with the families or the individuals that wanted to participate in it,” Sanchez replied.

Batey represents the southwest Bakersfield neighborhoods zoned for Bakersfield High School known as The Rudder. He said he worried that the smaller committee size might have contributed to reports he heard of opposing factions in the committee.

“I don’t want to penalize all the students that are in BHS and in The Rudder, because we chose to have a smaller committee,” Batey said.

A passionate constituency of alumni and prospective parents have made up the vast majority of the 45 people who have spoken at the three public forums and Monday night’s board meeting. Plan 1 and Plan 2 would zone some or all of these southwest neighborhoods to West High or Stockdale High School. This group has organized with yard signs and a petition delivered on Monday night for Plan 3, which would keep The Rudder intact.

“I appreciate the passion of some of our parents out here but we have to also think about the other 40,000 parents of students that it’s going to effect,” Manriquez said. “No matter what proposal we pick there’s going to be movement.”

One major sticking point between the two groups is whether to bus students in The Rudder to West High instead of BHS, as proposed by Plan 1. The district’s transportation department states this change would save 44.8 miles daily, which translates to $91.39 daily or $16,450 annually.

KHSD boundary presentation to the board

Board presentation on KHSD boundaries