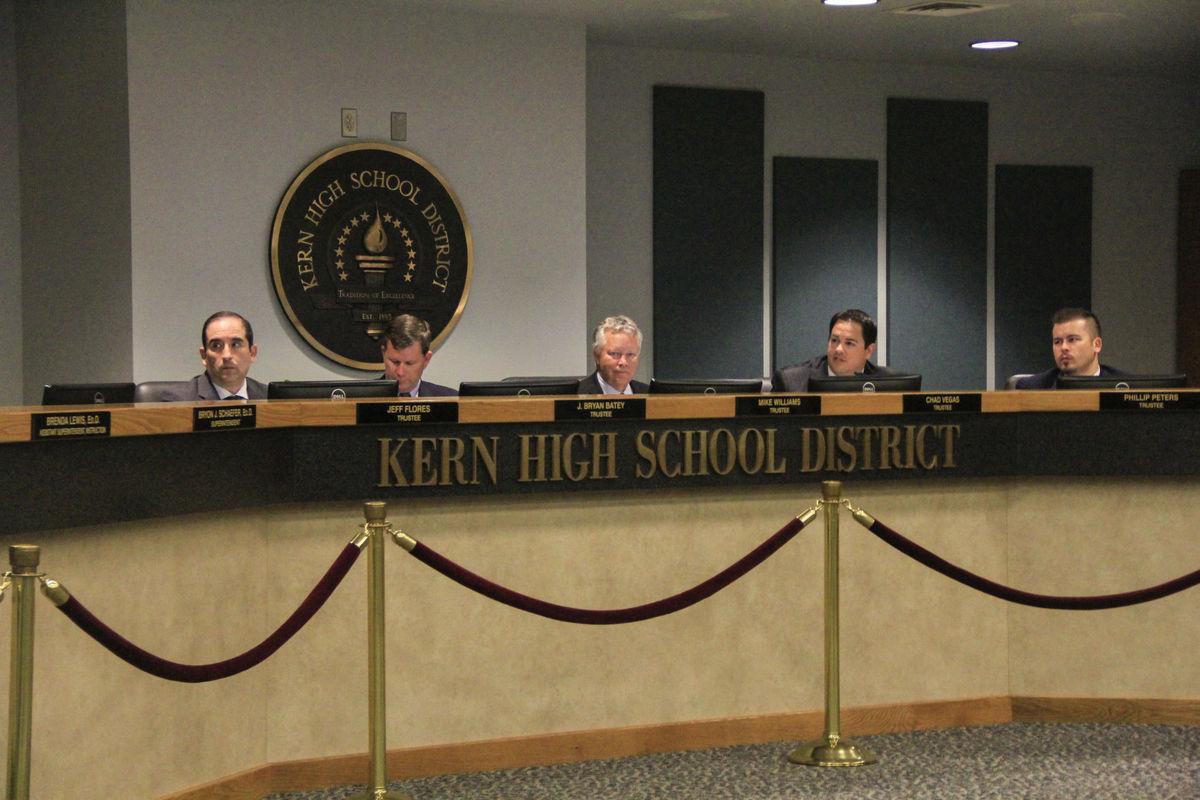 The Kern High School District Board of Trustees. 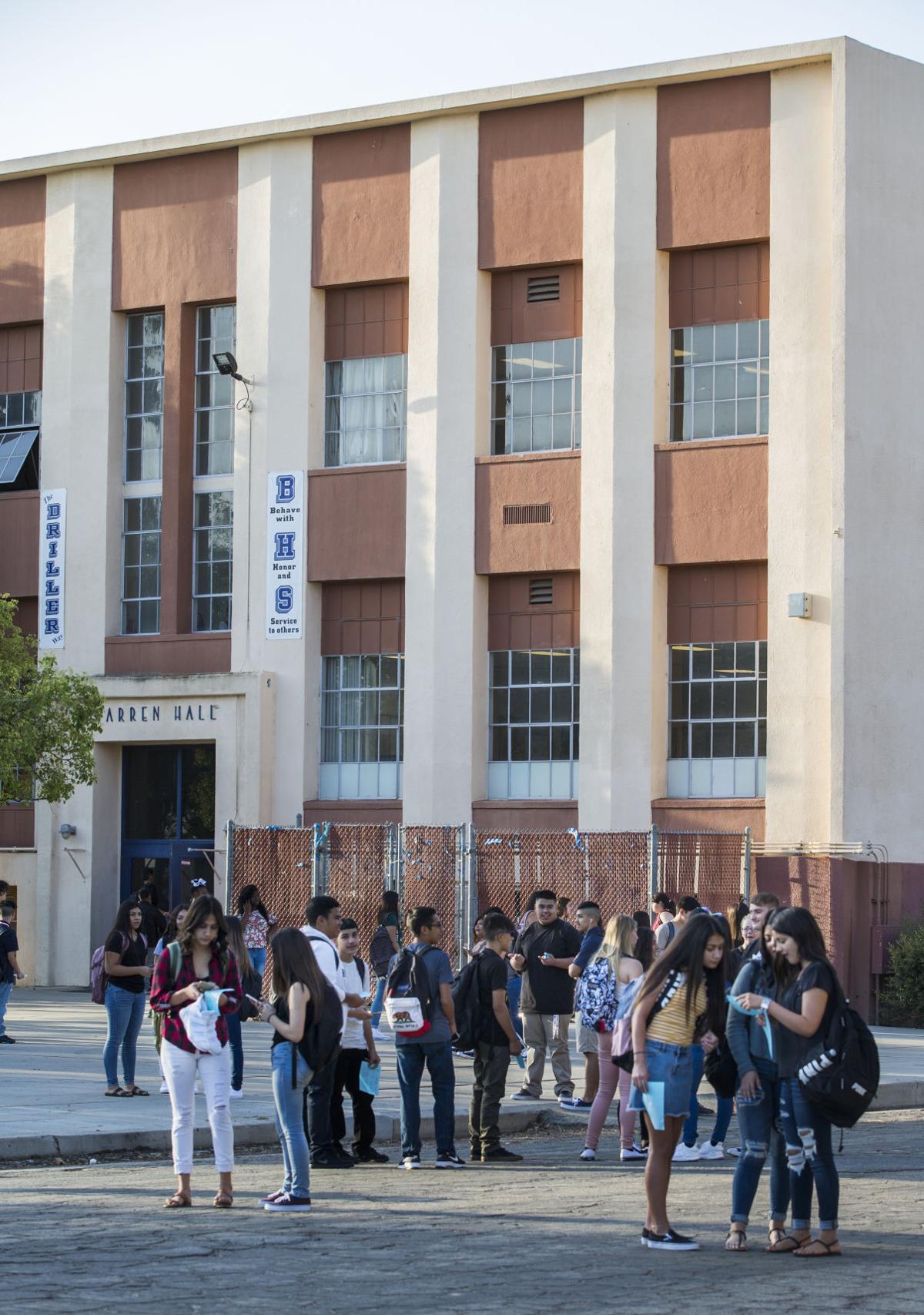 With Warren Hall in the background, Bakersfield High School students mingle before the start of classes.

The Kern High School District Board of Trustees.

With Warren Hall in the background, Bakersfield High School students mingle before the start of classes.

Two Bakersfield High School teachers who say they were physically attacked or threatened by students could receive a settlement package next week.

At its June 25 meeting, the Kern High School District Board of Trustees is set to consider settlement of hostile working environment complaints filed late last year. A proposal will be recommended by the district that could include financial and other forms of compensation.

However, the teachers and their representative said at a special board meeting on Wednesday that they were supposed to receive a report from Superintendent Bryon Schaefer by June 1 on what was going to be recommended to the board but have yet to receive it.

“If we haven’t gotten anything in writing, we don’t know whether there was a meeting of the minds on the terms and conditions of a settlement,” Anthony Leonis, who represents the teachers as a labor negotiation consultant with Alternative Dispute Resolution Services, told the board. “It denies me a right to adequately represent my clients with the district’s failure to provide me with information I’m legally entitled to.”

Leonis said he’s concerned that if he and his clients receive no information prior to the meeting, they won’t have the ability to negotiate.

“It almost appears that it’s going to be something like ‘take it or leave it,’ and that’s not good-faith bargaining,” Leonis said to The Californian. “It does not give us the opportunity to explore alternatives.”

Trustee Jeff Flores said at the meeting that there is still time to get them the information they seek.

“If the superintendent said he would give them a report prior to our next board meeting, we still have a window for him to make good on that,” he said. “We want a positive resolution to this.”

The lack of information about the settlement proposal has just been the latest frustration in the way the district has handled the complaint process, Leonis said.

According to KHSD policy, the district is required to investigate and resolve a complaint within 60 days of when the complaint was made.

With the first complaint from teacher and coach Terry Chapman presented to Bakersfield High more than a year ago and the district this february, Leonis said the complaint resolution process has gone on far too long.

“There’s been a lot of frustration in resolving an issue that was, in our opinion, very simple in regards to resolving it,” he said.

Chapman said he filed a complaint after a student physically assaulted him at Bakersfield High in October after he asked the student not to leave class early. The student had just returned from a three-day suspension for threatening an administrator.

Chapman said he’s also had to break up fights between students. During one incident in February, after he had already submitted his complaint, he was injured in the process of stopping a fight.

Chapman said the situation at the school has gotten worse over the past few years as the district changed its policies regarding discipline.

“They stopped disciplining students for bad behavior. There are no real consequences,” he said. “The behavior has gotten out of control. It’s putting stress on the teachers, on the students who are trying to get a good education.”

Leonis’ other client, fellow Bakersfield High teacher Johnny Maran, said that in December he was verbally threatened by a student after he became upset upon learning that he couldn’t take a course. Maran said he was concerned that beyond shouting expletives at him, the student would also physically attack him, but that didn’t happen. That student has since voluntarily transferred to another school.

As a stipulation of the settlement, Maran told the school board that he wants to make sure the student doesn’t return to Bakersfield High out of concern over reprisals.

Maran is also looking to get his part-time coaching position back. Maran said he was fired from the position in April for what he believes was an act of retaliation on the part of the school or district for filing a complaint. He didn’t say what the official reason was for his firing.

In addition to some of these demands, Leonis said that Maran and Chapman are also entitled to financial compensation

Maran said he is upset that it has taken so long for these issues to be addressed.

“We’ve done everything that we had to do, the correct procedures,” he said. “Delay, deny, deflect — those are the tactics that the district has used on us.”

During the meeting, Trustee Joey O’Connell told the teachers and Leonis that the district is still committed to resolving the complaints.

“I think this is something that’s not going away. We recognize that, and I think we’re working as quickly as we can to solve it,” he said. “I wouldn’t be disheartened by this. It may seem very slow to you, but I’m sure your concerns aren’t going away from us. We recognize they’re there and they’re going to be addressed.”

Leonis said that if a settlement package can’t be agreed upon, litigation is an option, but only one of last resort.

KHSD officials declined to comment, citing the issue is a personnel matter.

What: KHSD school board meeting

During its special meeting on Wednesday, the Kern High School District board of trustees approved the first readings of three district policies that have been updated to address student immigration status.

The polices relate to bullying, nondiscrimination in district programs and activities and general nondiscrimination/harassment. The board will consider final approval at its June 25 meeting.

At Bakersfield High, students 'cuss up a storm,' fight and assault staff; teachers say new disciplinary practices are to blame

I suggest litigating this in court and sharing with the public the evidence. The public doesn’t really understand how bad student discipline has become due to district and state policy. If they knew maybe they would demand change. It’s time we stop ripping off students who want to get their educations in order to constantly coddle the bad actors, while endangering teachers who are trying to do their jobs. A closed door settlement helps the victim teachers, but a public sharing of the evidence may help all students and teachers.

Good to see (based on the above picture) that Chad Vegas is back on the Trustee Board! LOL!