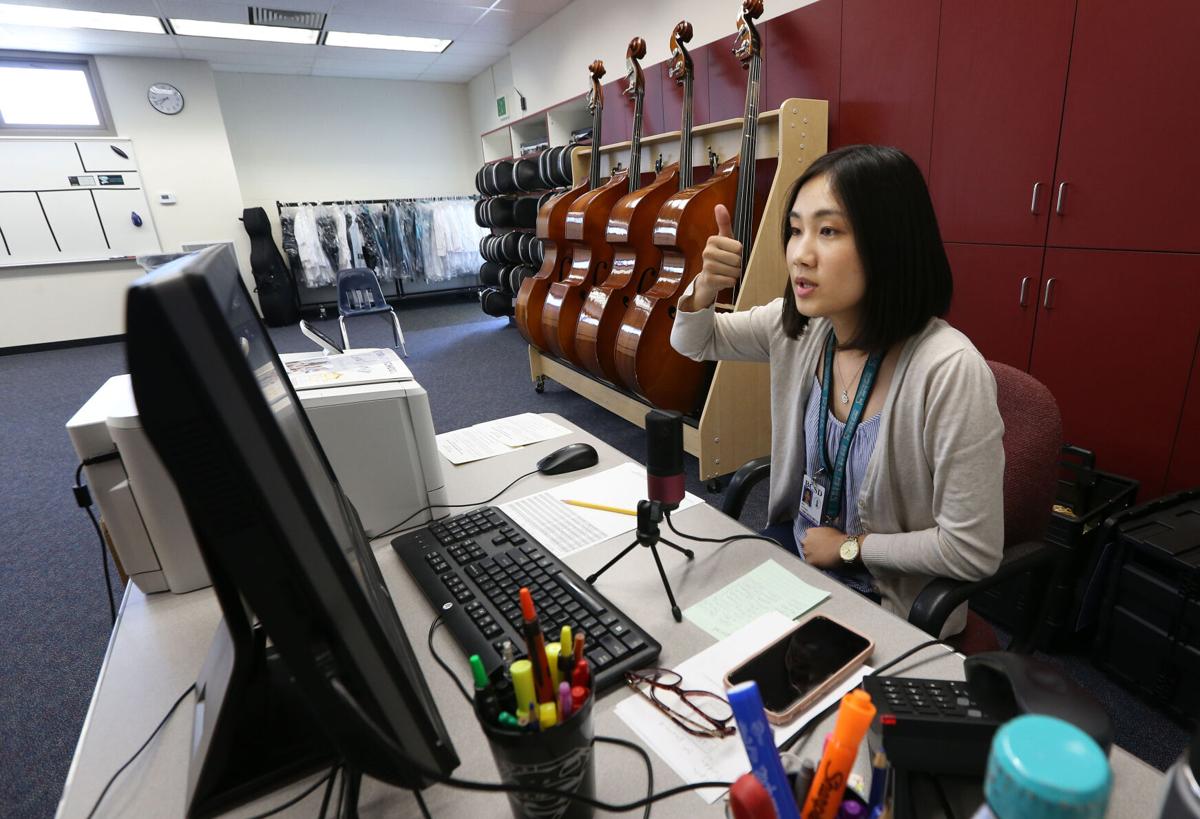 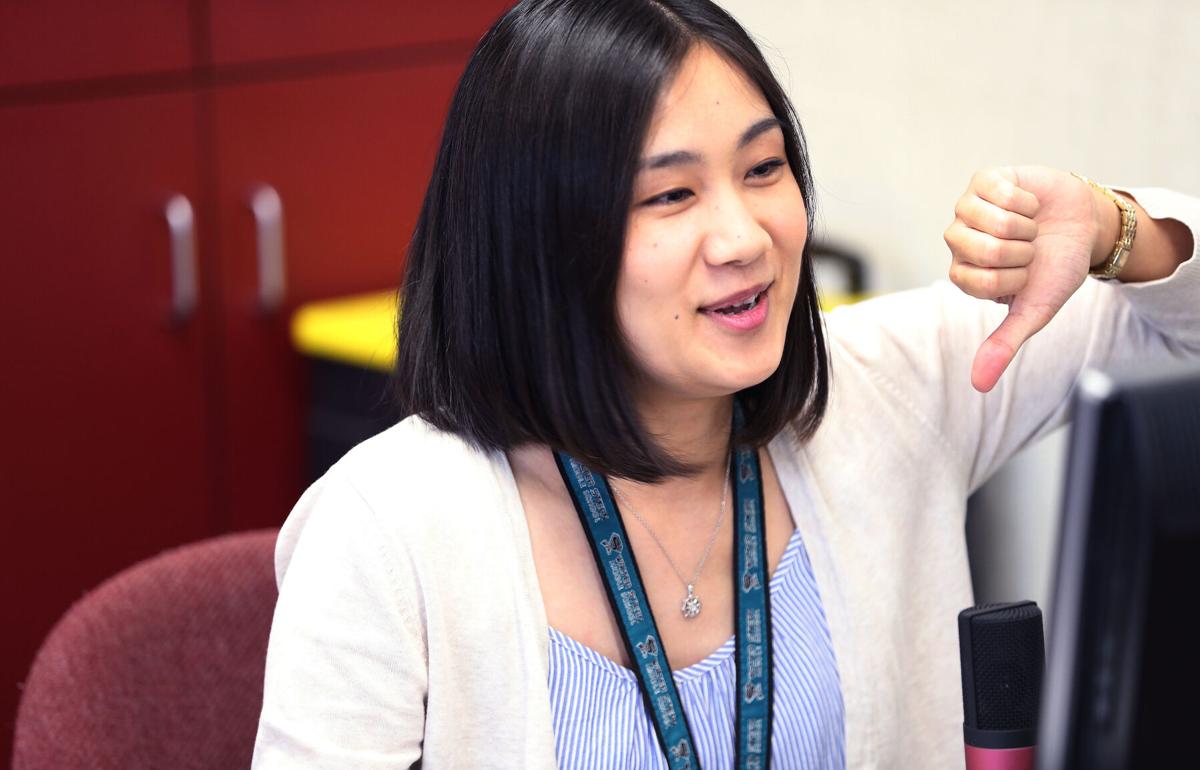 With the use of hand signals, music education teacher Rie Aoyama at Stiern Middle School checks students' understanding of an assignment during an online Zoom teaching session. 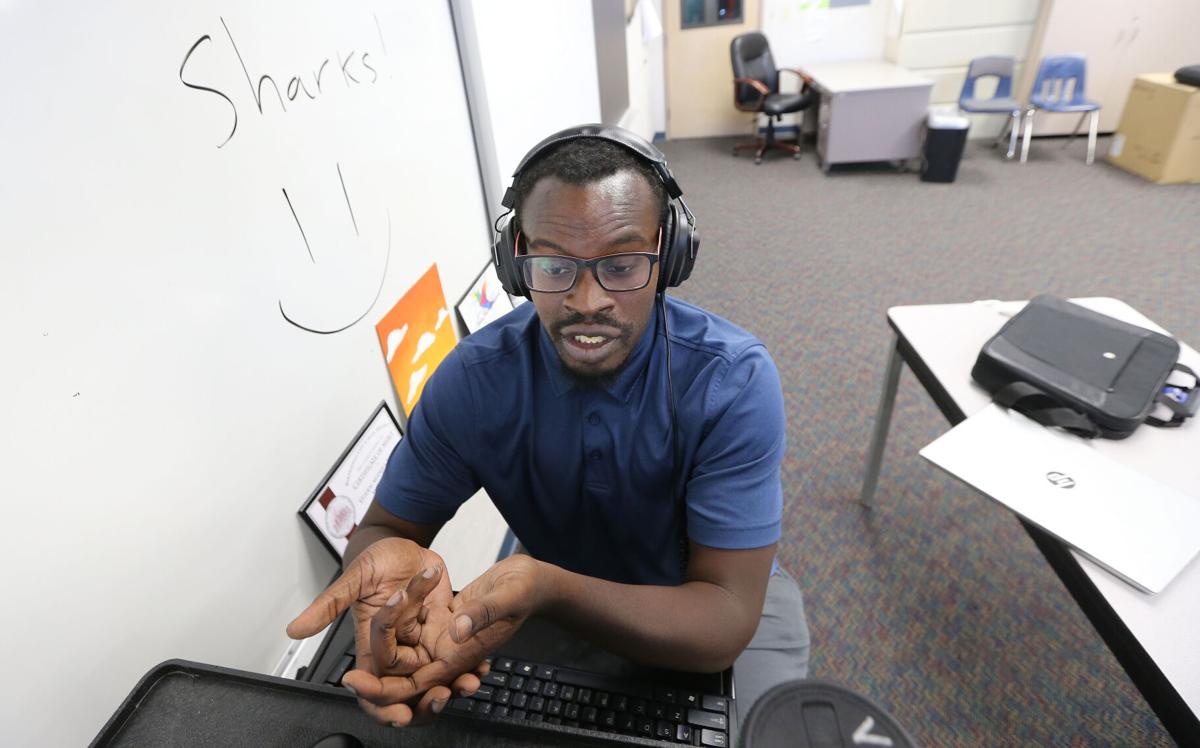 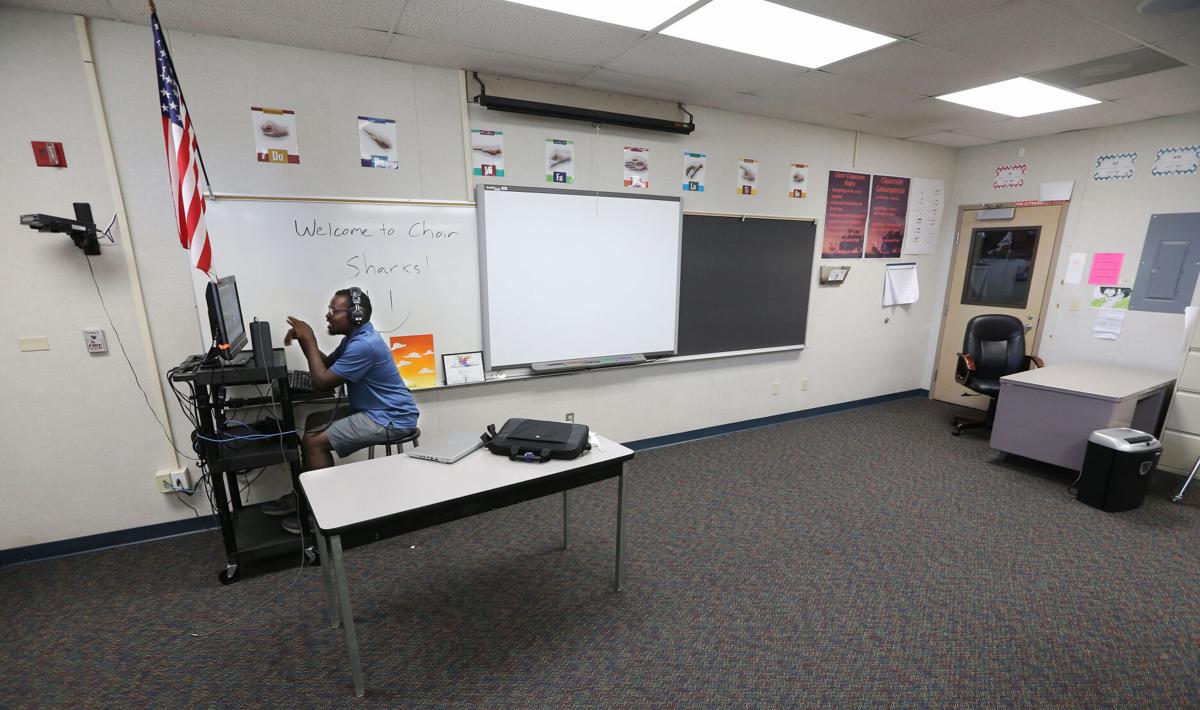 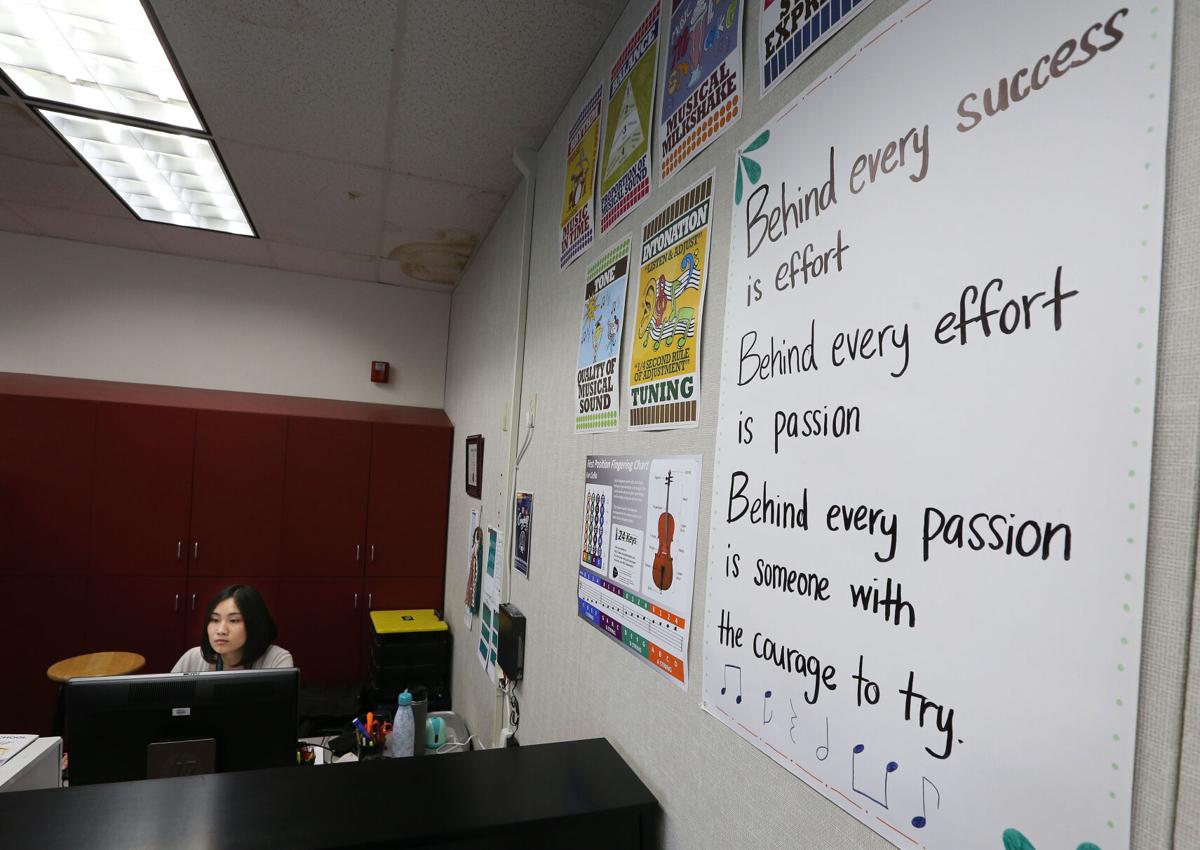 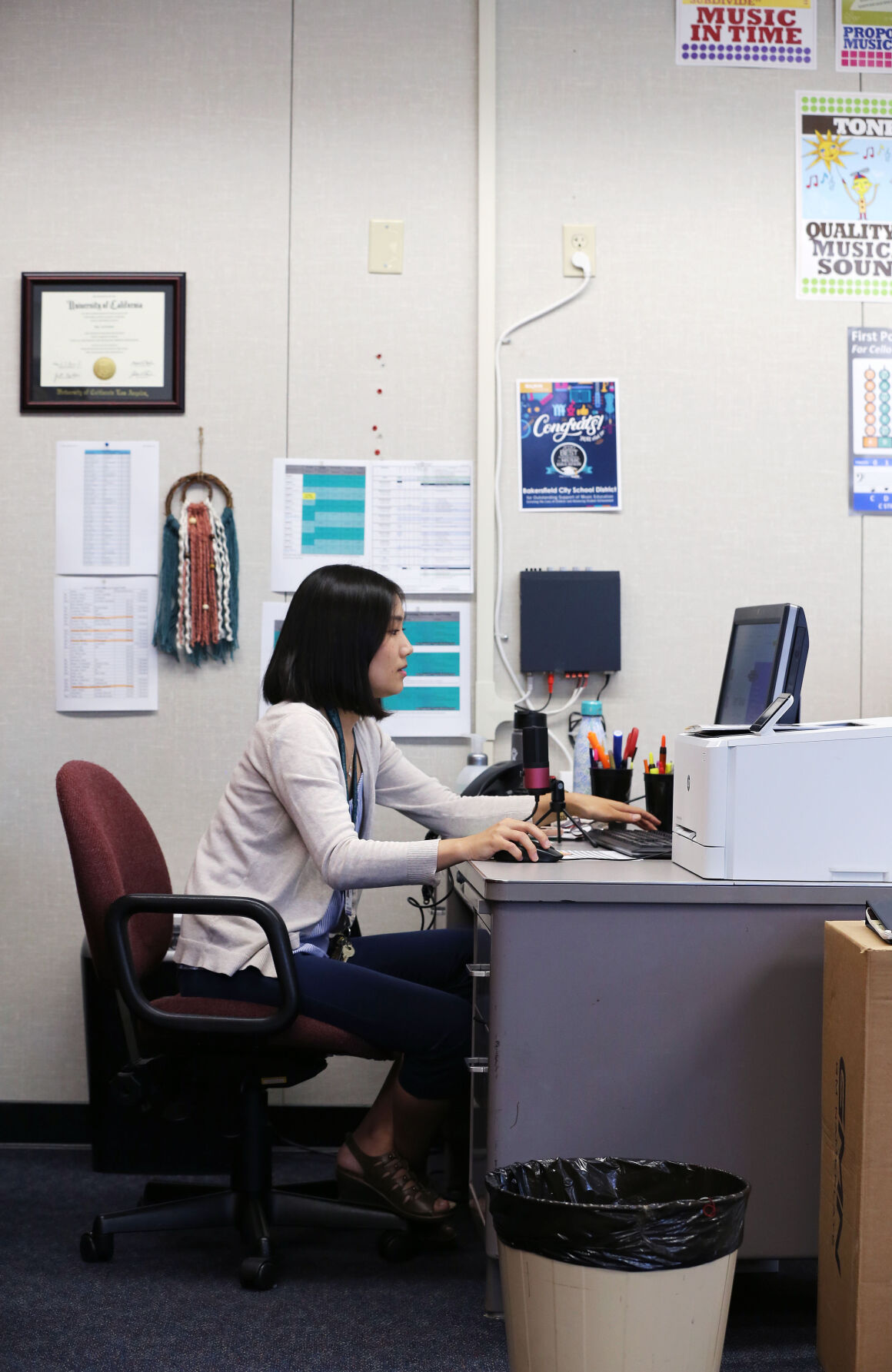 With the use of hand signals, music education teacher Rie Aoyama at Stiern Middle School checks students' understanding of an assignment during an online Zoom teaching session.

The first week of school is almost over, but music classrooms at Stiern Elementary are strangely empty and quiet, except for the sounds of teachers checking in with students over Zoom. Kern County music teachers are doing what might have seemed unthinkable a year ago: teaching thousands of students to sing and play instruments over an internet connection.

It’s a big change for music teachers, said Rie Aoyama, the string specialist teacher at Stiern. They aren’t used to assigning work online — something that is already a regular occurrence in English, math, science and history classes.

“Nothing beats in-person instruction when it comes to music. You can spend hours watching YouTube instruction, but it’s not the same,” Aoyama said. “There are subtle directions about positions.”

But distance learning called for districts to completely rethink their music curriculum and for teachers to learn new software and reconsider the way they create a music community in their classrooms.

“It’s forcing us to change the way we think about instruction but one thing that hasn’t changed is music teachers’ passion for the students,” said David Green, president of Kern County Music Educators Association and the director of bands at Independence High.

Ryan Clippinger, director of choirs at Arvin, worked on the Kern High School District team that created a districtwide choral curriculum. They use Canvas, which offers built-in recording software, so that students can record a piece of music and send it to the teacher for feedback. He says individual attention will be one of the big pluses to come out of distance learning.

However, instrumental teachers feel at a particular disadvantage, especially when it comes to teaching less experienced student musicians.

That’s why students who didn’t pick up an instrument last year won’t be picking one up just yet at BCSD. Elementary students will be using a music program called Quaver that offers a solid general music education foundation. The program teaches how to keep a steady beat, how to read notes and how instruments sound, explained BCSD academic coach Steve Engel, who oversees the curriculum.

For the more advanced sections, like the ones Aoyama teaches, she's hoping to recreate as much of the physical classroom experience as possible: Students will mute themselves while playing along to her morning warm-ups. But for the first few weeks, Aoyama and many music teachers like her are simply making sure that kids are comfortable with the software that will make teaching possible.

Rocky Meadows, an eighth-grader at Compton, says he expected little more than a book of music and a video connection with his teacher. He misses that special “teacher’s touch” he gets in person, but he says he really enjoyed testing out the apps that allow him to play along with a recorded orchestra.

“It kind of brings that ‘zing’ or ‘pizzazz’ out of music,” said Meadows.

Besides familiarizing students with software, music teachers said they’re very focused on building community in their virtual classrooms in the early weeks.

“People don’t join choir because they want to sing by themselves, they want to join something greater than themselves,” said Clippinger. “That’s why I’m trying to keep a good pulse in the community.”

Teachers say unreliable Wi-Fi connections and lags on Zoom make playing in concert or singing in unison nearly impossible. So orchestras, chambers, mariachi bands and choirs — one of the biggest draws of joining a music program — are all on hold.

In the back of the classroom are reminders of what those groups worked toward before distance learning. There are no plans for students to put on their concert attire hanging up or the choir risers folded away — at least until spring.

But teachers haven’t given up on a virtual performance sooner. Every year around Valentine’s Day the Arvin High School library is converted into a “Choir Coffeehouse.” The choir borrows decorations and lights from the theater, decorates the tables and sings pop songs and plays music. Clippinger asked his students, and they were eager to recreate a virtual version of that experience in February.

Music education may not look or sound the same. But teachers, parents and students say that teaching music at this time isn’t just a state educational mandate, but an emotional necessity during a tough, lonely time in students’ lives.

Michael D. Stone, the coordinator for BCSD’s Visual and Performing Arts Department, points to data from last year that shows BCSD’s 4,467 students enrolled in music programs had better attendance and a half-point better GPA than students who weren’t in it. They’ve maintained their music department’s staffing at current levels, and so far student participation looks healthy this year.

Aoyama said some of her students told her they really missed playing the violin over the summer: “I feel like it does give them some sort of comfort, and a new challenge for those who are learning something new after five months of staying in.”

Lorena Isidoro, whose daughter Esmeralda Isidoro first picked up a violin when she first went through chemotherapy, sees music right now as helping her daughter and her classmates get through another tough phase: “They release a lot of emotions and feelings through the music.”

Not even a pandemic could stop an annual tradition for the best choral students in California: the show will go on in a virtual format for the…