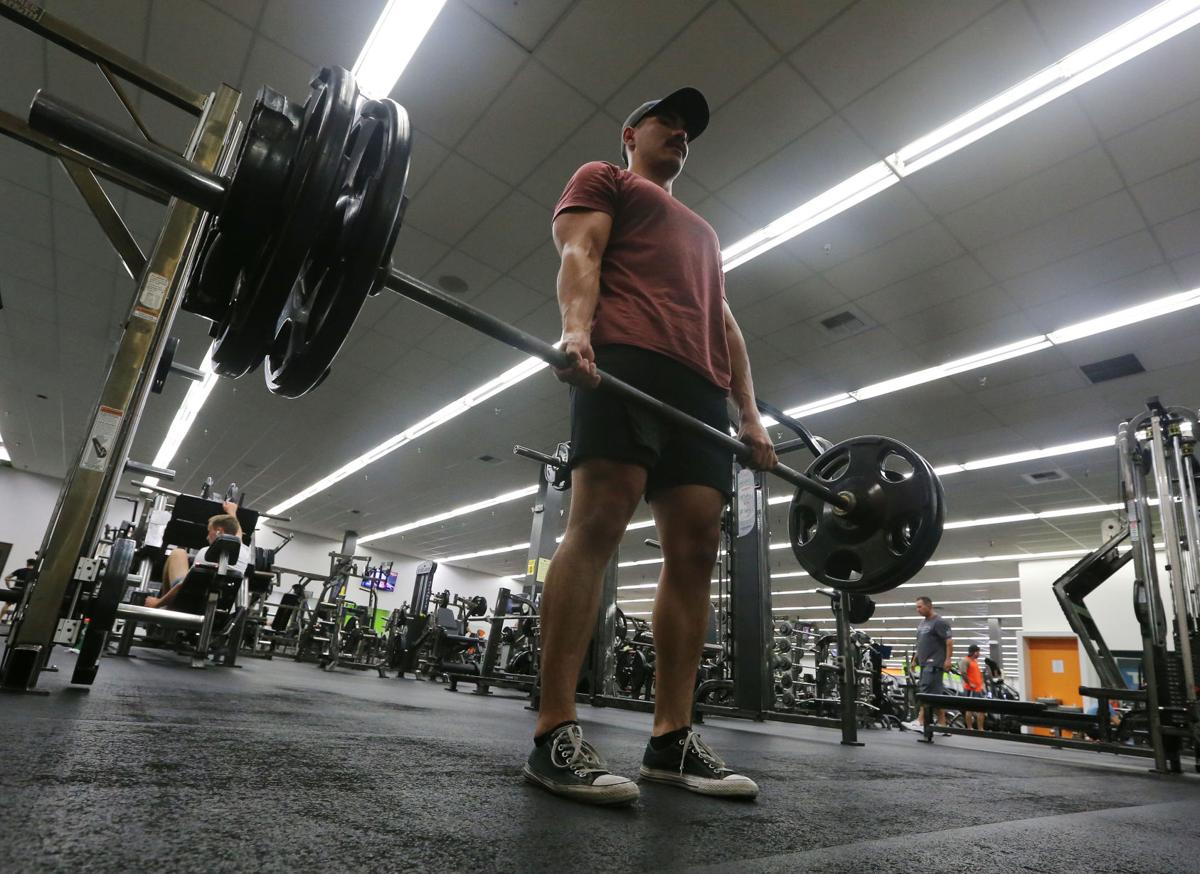 Alan Guardado works out at Body Xchange located on Calloway Drive Wednesday afternoon. Gyms have started reopening this week, albeit with some serious modifications in place, including Body Xchange. Capacity is currently capped at 22 percent. 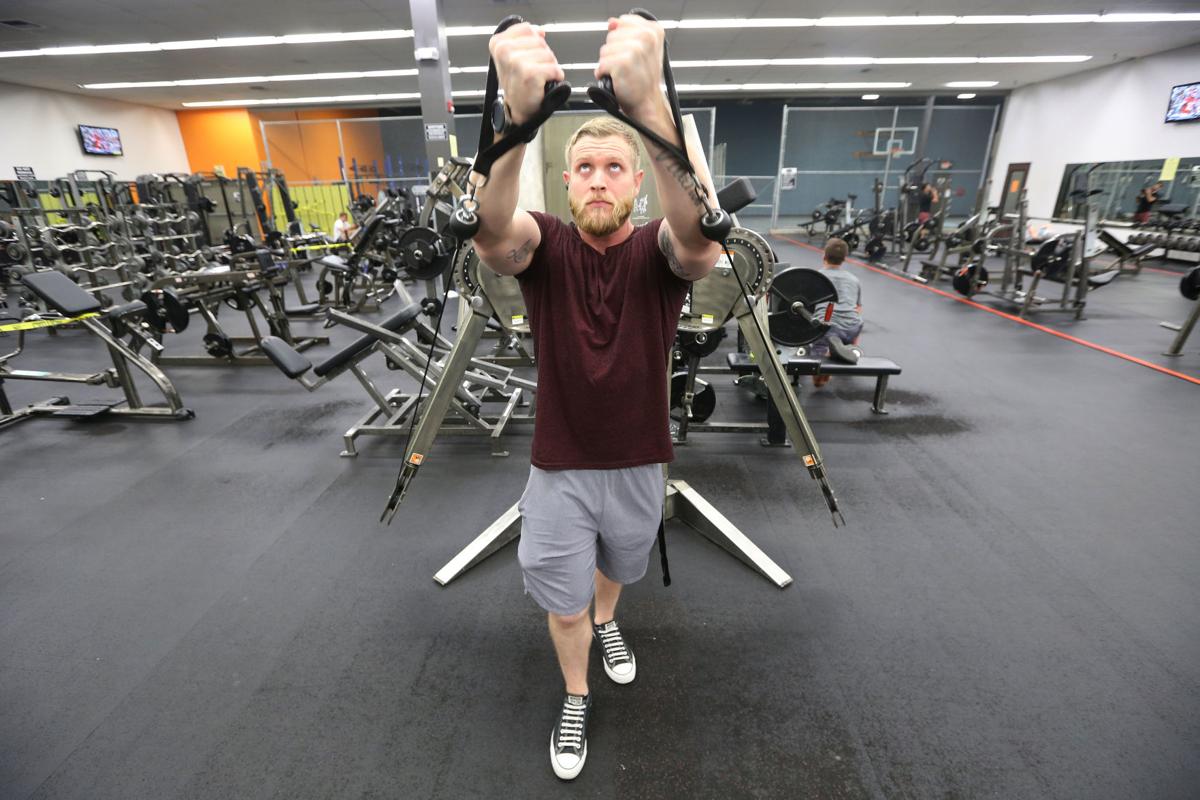 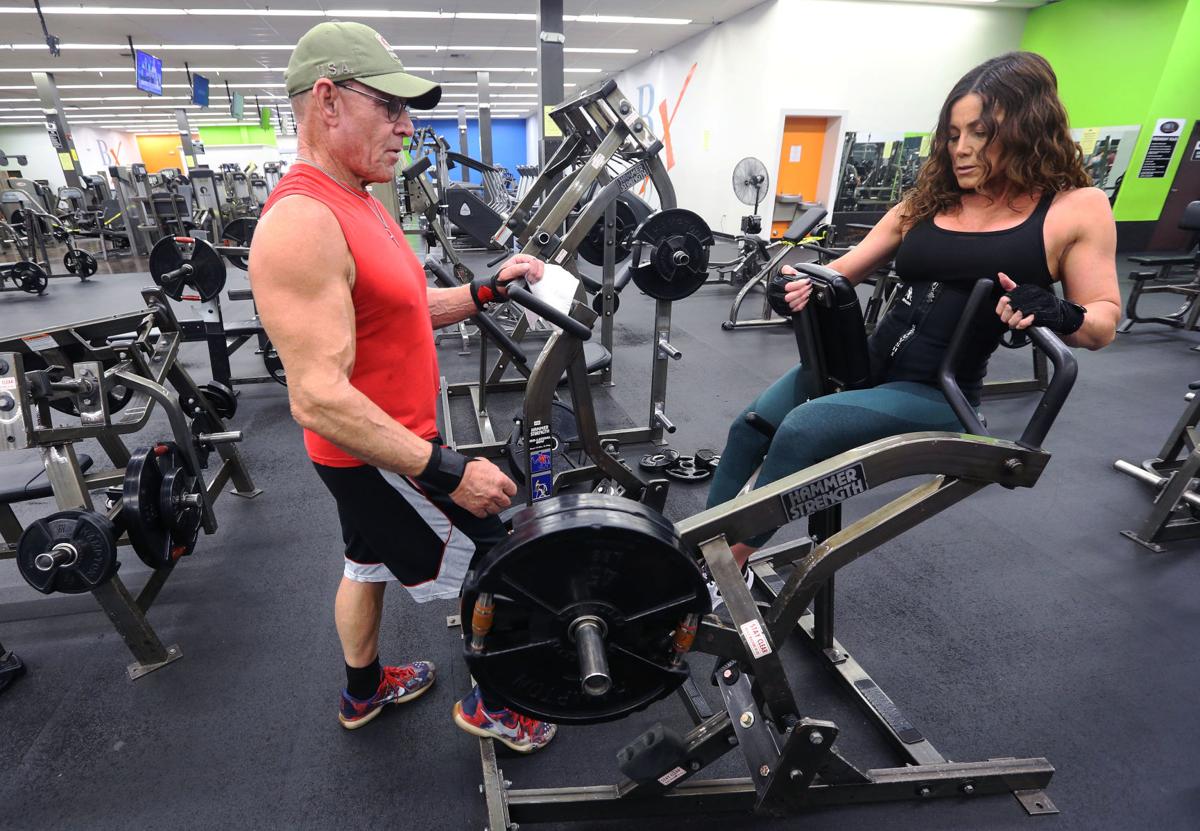 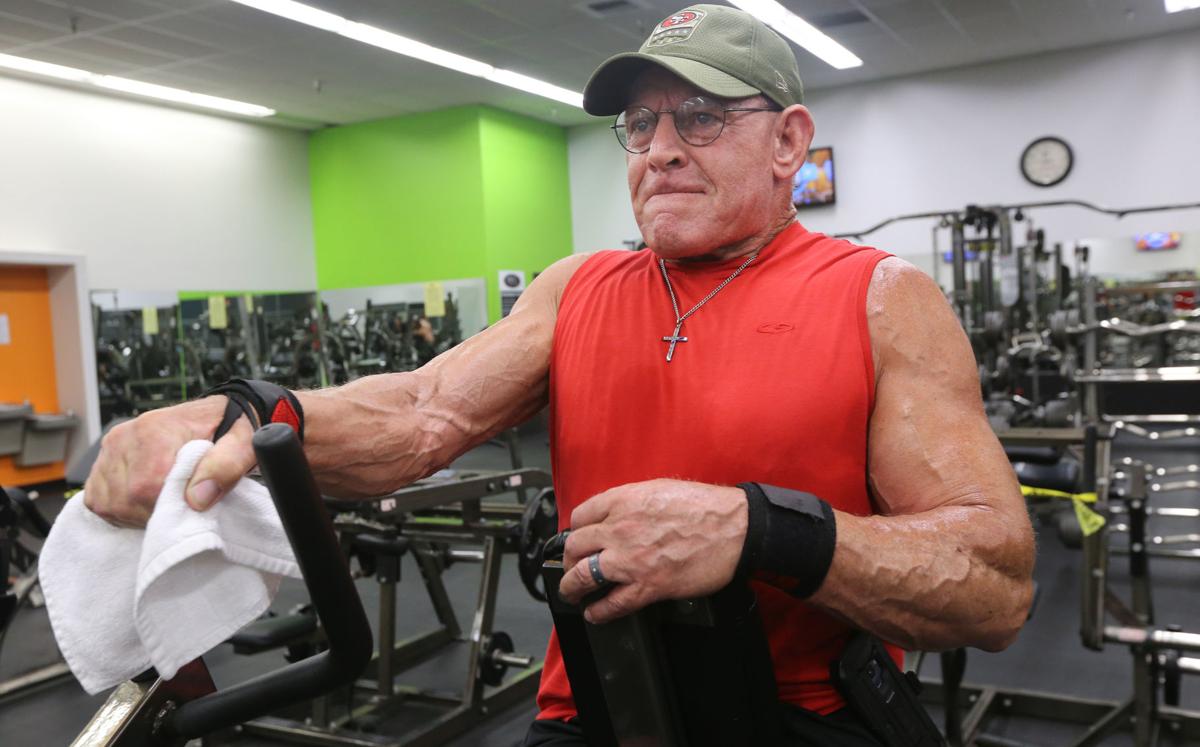 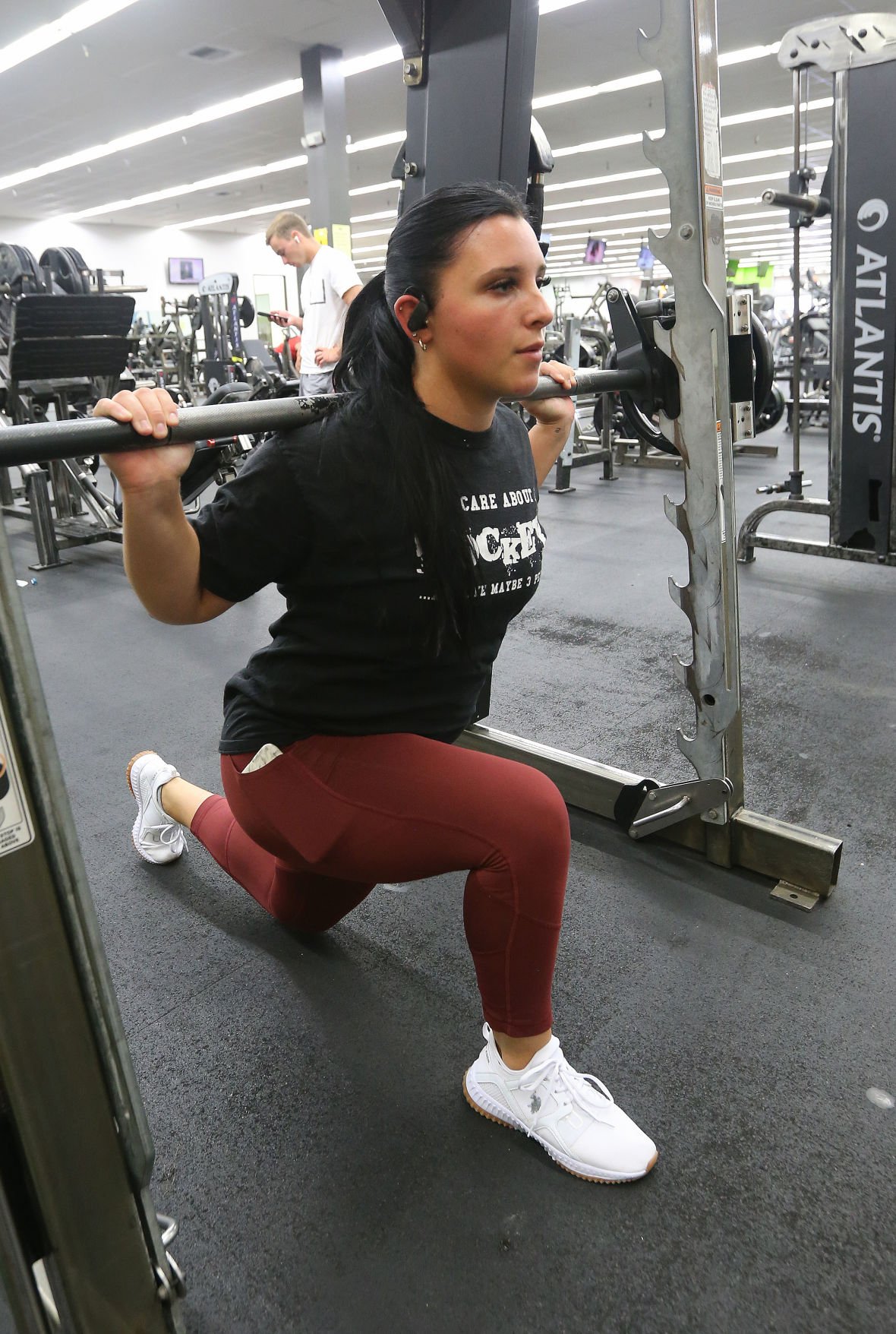 Emily Horack works out at Body Xchange located on Calloway Drive Wednesday afternoon with some weights. Social distancing protocols have been put in place during the reopening.

Alan Guardado works out at Body Xchange located on Calloway Drive Wednesday afternoon. Gyms have started reopening this week, albeit with some serious modifications in place, including Body Xchange. Capacity is currently capped at 22 percent.

Emily Horack works out at Body Xchange located on Calloway Drive Wednesday afternoon with some weights. Social distancing protocols have been put in place during the reopening.

If you missed the sounds of weights hitting the ground, the stinky smell of sweat and the feeling of pure adrenaline and strength, Kern County's latest reopening stage has brought back a comfort for many: fitness facilities.

For almost three months residents have been cooped up inside, trying to find in-home workouts to stay active. But as any avid exerciser will tell you, it's just not the same.

This week saw several local gyms and fitness facilities reopen their doors, with modifications in place. Members say it's a moment they've been waiting for for nearly 100 days.

"I've been coming here at 5 o'clock for the past 18 years," said Body Xchange member Virgil Smith. "When my wife said they were reopening, we made an appointment."

Before a member enters the gym area, their temperature is taken, they're asked to wear their workout clothing and to have water bottles with them since the use of water fountains is currently unavailable. No workout bags are allowed inside, and masks are recommended but not required.

Certain areas such as the day care centers, showers, locker rooms and basketball courts are currently out of use.

Members sign up for a workout time slot, and inside notice certain machines blocked off to allow for at least 6 feet of social distance. After an hour and 15 minutes, members are asked to leave the gym area so that deep cleaning takes place. Ovanessia said members also are cleaning machines after use.

"Even before we closed, they were paranoid about germs and they took it upon themselves to clean like crazy," he said. "It’s been an amazing thing."

Capacity at each location is capped at 22 percent, which would be about 120 individuals at the White Lane location. So far, Lisa Nelson, director of operations, said numbers reached 62 and 41 individuals Monday and Tuesday, respectively, during the busy 6:30 p.m. time slot.

About 30 people were hitting weights, treadmills and other equipment Wednesday afternoon.

"I was dying to get back in here," said Dtea Sams. She said she's always been underweight, and the way she maintains a healthy weight is by eating 2,000 calories a day and working out, which has been a struggle recently.

Smith said if he doesn't work out consistently, his knees, hips, shoulders and back, which was operated on a few years ago, start acting up, which he experienced the last few months.

What makes the location in Oildale unique, explained Delamater, is that it has a rare AirPHX sanitizing system that kills bacteria and viruses in the air and on surfaces, achieving hospital-level cleanliness.

"It makes it so much easier for us to provide a safe environment," he said.

Though the Tehachapi location doesn't have an AirPHX, air vents were cleaned out prior to reopening, making sure pure air was coming into the facility.

Both locations are also following guidelines from the state, which include temperature checks, social distancing and frequent cleanings. Child care, workout classes and personal training options also have been discontinued for now, and wearing a mask is optional.

For those who are used to working out with others, such as Smith, it's been a bit of an adjustment. But he said he'll follow all the protocols and make sure he cleans up after himself because "we don't want this taken away."

Some are hesitant to come back to the gym, as Ovanessia has experienced through phone calls with members. Their membership can be frozen until they're ready to return, he said.

Twelve more industries were allowed to reopen starting June 5 under Stage 3 of California's economic reopening plan. In state guidelines, all businesses are asked to continue emphasizing physical distancing to the maximum extent possible; use of face coverings by employees (where respiratory protection is not required) and customers/clients; frequent hand-washing and regular cleaning and disinfection processes in place; training employees on these and other elements of the COVID-19 prevention plan.

Here are the latest sectors to reopen in California, with modifications in place:

This will probably get deleted again, but oh well. i mentioned earlier that martial arts schools are not gyms and still, as of June 17, do not have permission from the county to reopen. I once again called the Kern County Health Department this morning to make sure this is still the case. It is. Sadly, many well intention owners of martial arts schools are mistakenly opening. i do not want to see any of these good people penalized as this is an easy misinterpretation. The KCHD will be sending them letters to desist as time permits. Maybe the author of this article can issue a clarification in the paper?

"Achieving hospital level cleanliness"?? It is in hospitals that people catch staff infections which is deadly. Not a good example and the man in the picture is not wearing a mask. the virus does not take a hiatus because this gym wants to open. Either acknowledge that these decrees are absurd or follow them.

They started charching does again. I would love to go to the gym, just cant figure out how to not breathe while I work out!