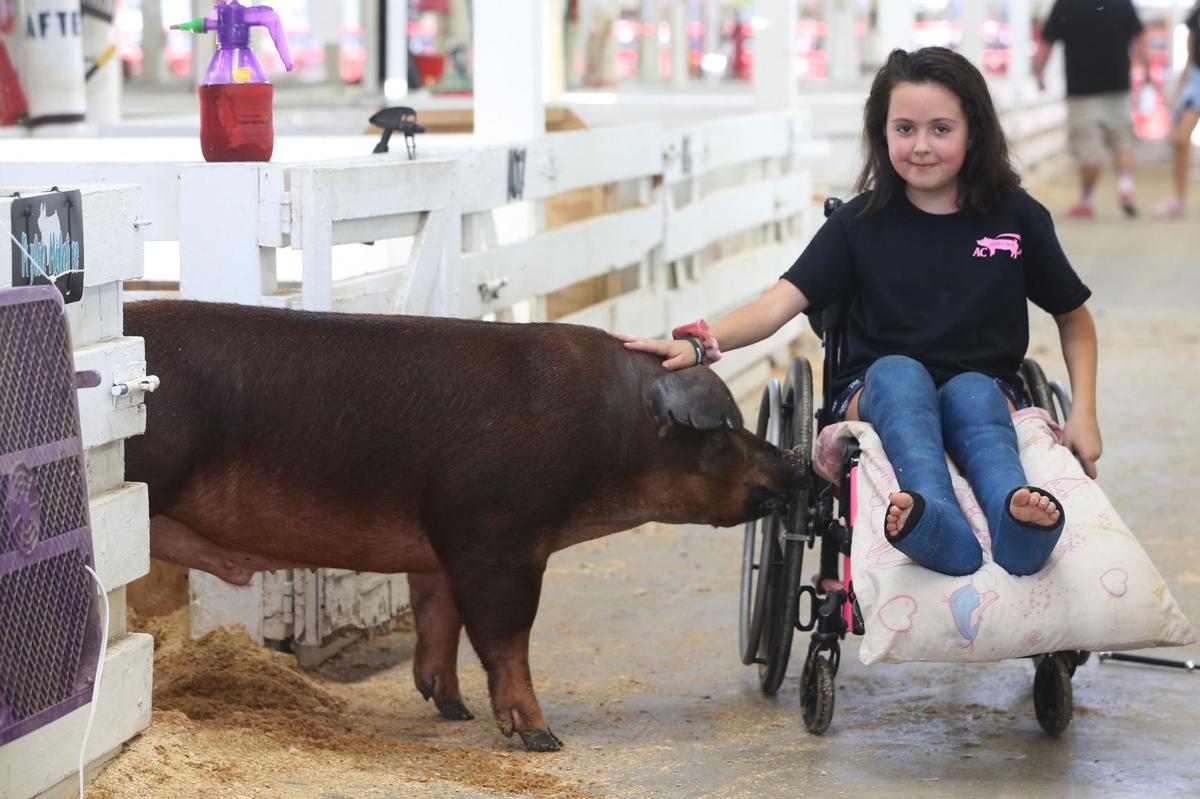 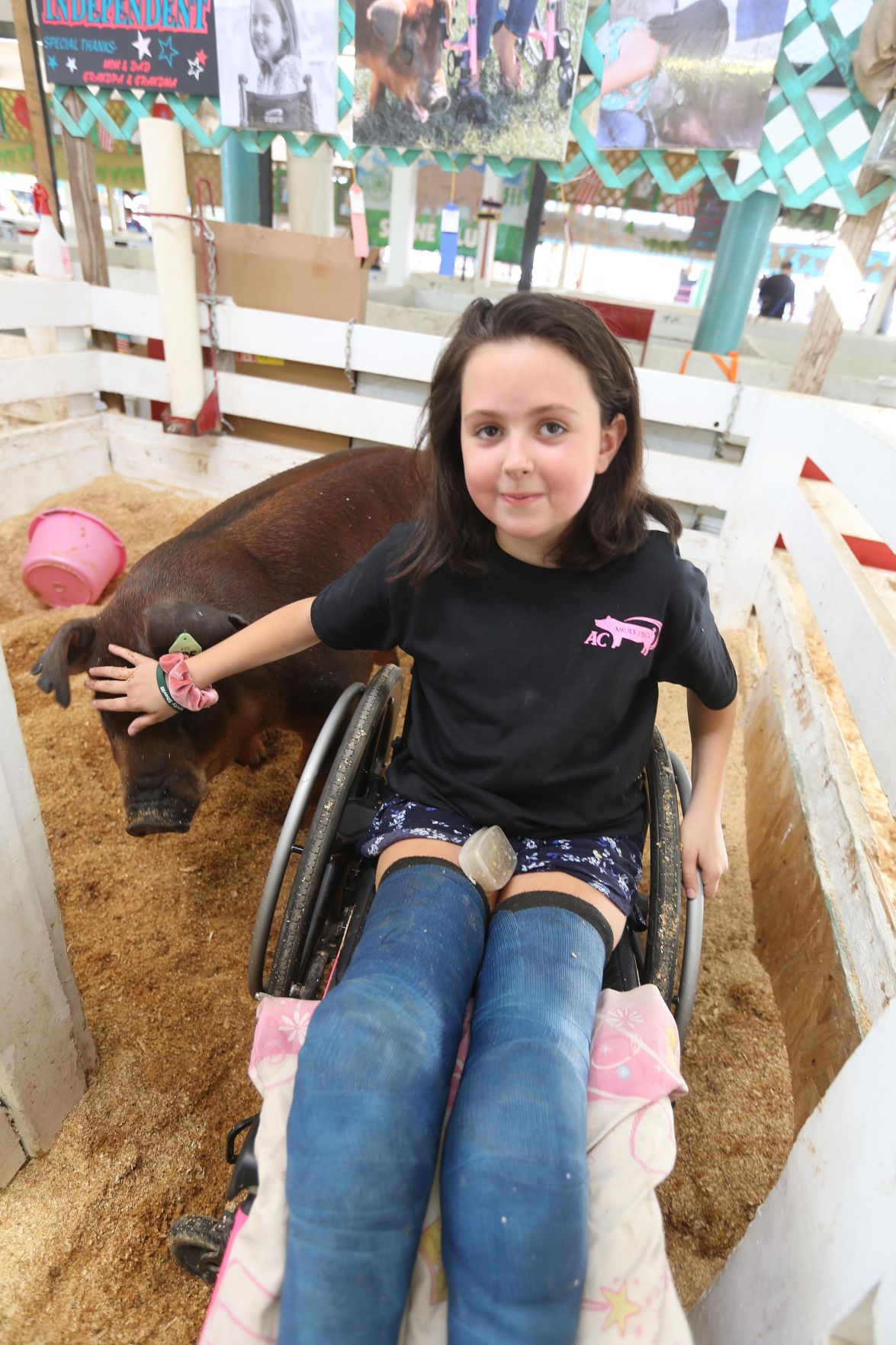 Anyone who knows about the livestock competitions at the Kern County Fair knows how coveted a belt buckle is.

It's the top prize in the showmanship competitions, the badge of honor for the hard work that goes into raising an animal, getting it to weight and reaching the top of a class. Walk through the livestock barn and you'll see kids wearing the buckles they won in previous years.

But parents of competitors with special needs say their kids are not getting the opportunity to share in that spirit.

Candice Molatore said her daughter Peyton won in the special needs showmanship category with her pig Monday but both she and the other competitor she went up against were handed first place ribbons at the end. Peyton suffers from junior rheumatoid arthritis and gets around in a wheelchair after both legs were put in a cast following a recent surgery.

"It was like a pity show," Candice Molatore said. "If they're here to show showmanship, they should be treated like all the other showmanship classes." In all other cases, Molatore said, that means awarding a grand champion and handing him or her a belt buckle.

Physically and developmentally disabled kids compete alongside all other kids at the fair except in the showmanship category. Whereas the market and breed competitions tend to focus on the animal itself, showmanship is about the exhibitor — their knowledge of the animal and how they handle it in the ring. Because many special needs kids need assistance or special accommodations, they compete in their own category for showmanship.

When contacted, the fair's livestock office referred all calls to the fair's marketing director, Chelsey Roberts, who said belt buckles for special needs winners are typically ordered after the competition because they don't always know which classes will have competitors. Roberts also said judges have the authority to place exhibitors as they see fit, and that may mean awarding two first places.

"The special needs buckles are not ordered until entries close so that there is no wasted money on buckles that cannot be reused. Because we allow exhibitors to enter up to 30 days before the Fair starts, those buckles typically don’t arrive until after fair," Roberts wrote in an email, adding that belt buckles take roughly 8 weeks to arrive.

But parents say even in cases where kids have been told a buckle is on its way, some kids haven't received them.

When Jennifer Veith's daughter Katelynn won showmanship last year, she was told she'd get a belt buckle. Jennifer said she's contacted the fair's livestock office about five times since then and each time was told the belt buckle was on order. She bought her daughter a special belt to display the buckle at this year's competition but the buckle never arrived, Veith said.

"They work just as hard as the others and you're treating them like they don't matter," Veith said.

To make matters worse, Sheri Anthes, Katelynn's grandmother and a local realtor, said she has sponsored a belt buckle for the livestock competition for the past few years with the understanding that it would help fund buckles for all categories, including for the special needs classes. When Katelynn never got the belt buckle, Anthes felt misled by what the fair had told her. But, worse, she said, was how it must make the special needs kids feel.

"I feel like it stigmatizes these kids even worse," Anthes said. "You tell them they’re expected to do all the same work but then they're not recognized for the accomplishment the same way?"

In an emailed response, the fair's Roberts said she personally looked into the matter and that Katelynn's belt buckle is on order. The buckles for this year's special needs winners have also been ordered, Roberts said.

Heather Van de Kerkhoff has two children that compete in the fair's special needs classes, a son, 11, and daughter, 15, who both suffer from mitochondrial disease. Both children had to wear special cooling vests and can't stand for a long time. The fair has been phenomenal at accommodating her children and she is grateful for it.

Still when her son won showmanship for his lamb this year and didn't get a belt buckle handed to him, he noticed.

"He sees what the other kids are getting and that’s what he wanted to earn," she said.

Susie Maretich, grandmother of Peyton Molatore, who showed her pig in a wheelchair, said she sent a letter to Fair CEO Mike Olcott asking him to better train his staff to understand that special needs kids deserve to be treated — and rewarded — the same as other kids.

"She has looked forward all year to compete with her animal," she wrote of her granddaughter, "and expected to be shown the same recognition as all other children."

Seems easy enough to have a temporary, placeholder, belt buckle manufactured, on the cheap, for distribution at the time of the win. Then the real, more expensive, one can be ordered and delivered, later.

It is money that is already there for those buckles. I would like to have an accounting of what the fair really pays for the buckles they order. Again the money is there they have no reason for them not being ordered like everyone else’s. It’s not the fairs money but from other articles on how the fair handles that tax payers money I guess that doesn’t matter.

Well big surprise the fair is telling big lies. First off the money that is used to buy these buckles is all off donations, I know this because I have donated in the past, it is not money that is for the fair to do what ever they want to do with it. That money is collected to buy buckles for all the kids even the special needs kids. Also entry are due on July 26th plenty of time to order belt buckles for these special needs kids and you have a child that has waited over a year to have you finally order her buckle that was paid for a year ago. Who ever is charge of the livestock office should be turned in to the Equality and Human Rights Commission this is a clear case of discrimination. Shame on you Kern County Fair.

JCruz why would you spread lies? the belt buckles are NOT donated and cash donations arnt specified for belt buckles...smh!!! here is an snip right out of the Exhibitor livestock catalogue on registration,

Open your book these are hog and sheep showman the entries close on July 26th, and lies excuse me I have donated plenty of belt buckles and the form I was sent stated that it was for Belt Buckles, I did not donate $125 for the fair to pocket it, it was for belt buckles, believe me the buckles are donated. Also since you don't seem to know the auction is not ran by a non profit it is ran by paid employees, maybe you have been out of the fair to long to have a clue what is really happening out there. Don't tell me I'm a lier go ask for yourself. Maybe you are a fair employee trying to cover this up. smh!!!

The state needs to take the auction over. The local people can’t handle it.

The auction is ran through a non profit that the state has mandated....know what you are talking about before posting