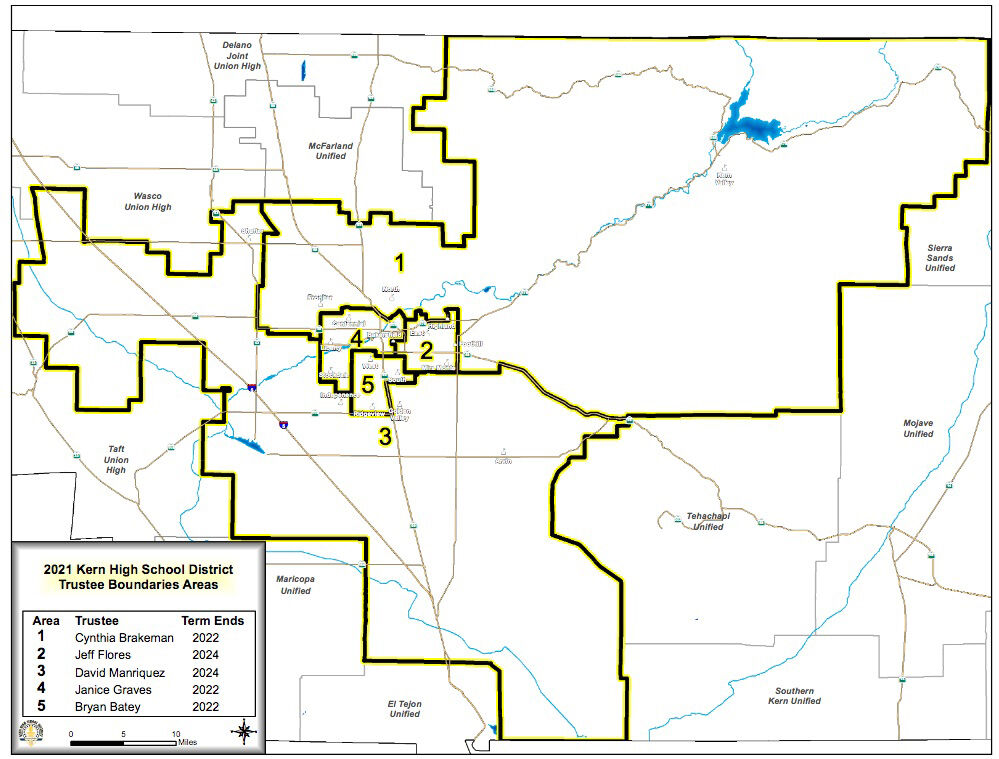 This map shows the current trustee boundaries for the Kern High School District. 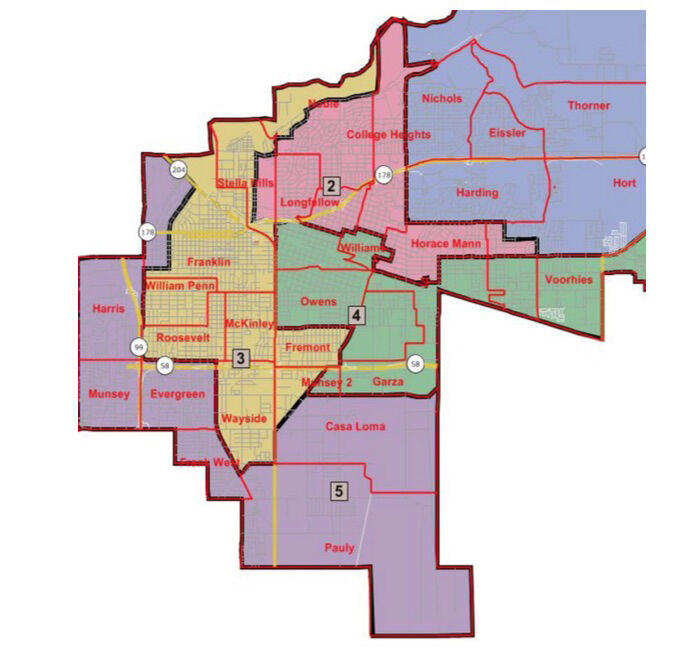 This map shows the current boundary lines for the trustees of the Bakersfield City School District. 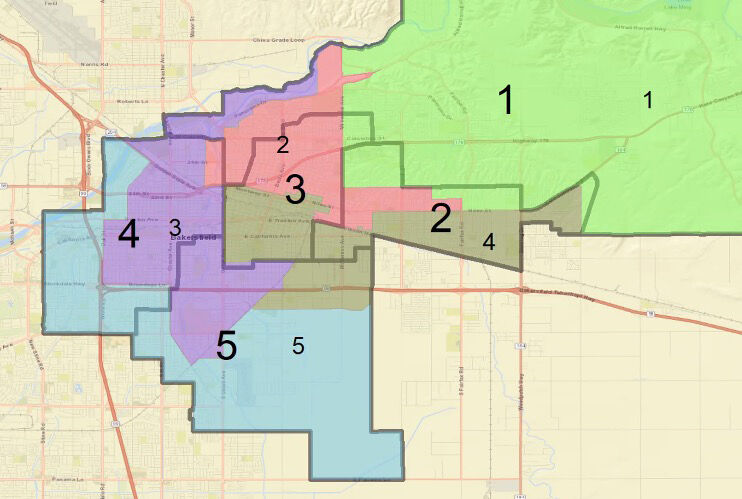 The Dolores Huerta Foundation offered up a sample map that redraws the boundaries of the Bakersfield City School District trustees. The colors show the current trustee boundaries and the thick lines constitute a new map.

This map shows the current trustee boundaries for the Kern High School District.

This map shows the current boundary lines for the trustees of the Bakersfield City School District.

The Dolores Huerta Foundation offered up a sample map that redraws the boundaries of the Bakersfield City School District trustees. The colors show the current trustee boundaries and the thick lines constitute a new map.

With fresh 2020 census data, school boards across the county have begun the process of redrawing their trustee boundaries.

"Most people think about it in terms of Congress, but we have to do it for local government, too," Paul Mitchell, a data consultant for Sacramento-based Redistricting Partners, told the Kern Community College District board at a special meeting earlier this month.

School boards are required to make sure their trustee areas accurately reflect the population every 10 years. The state deadline for districts to redraw the boundaries this year is Feb. 28, 2022. The deadline for the county's redistricting commission is Dec. 15, and many are awaiting those maps to dig in to the process.

The main aim is to make sure that the population is distributed evenly between districts, so that no one area has more voting power than another.

Unlike Congressional districts, which need to be exactly equal, school boards have a little wiggle room, according to Marguerite Leoni, a Bay Area-based attorney at the firm Nielsen Merksamer. She is leading both the Kern High and Bakersfield City school districts through their redistricting processes. She said that less than 10 percent deviation from the median is acceptable — as long as it isn't used in a discriminatory manner.

But there are other considerations. The federal Voting Rights Act prohibits boundaries that dilute the voting rights of racial or language minorities. Redistricting will try to maintain communities of interest, which for schools is often school boundaries themselves.

A few years ago, many boards in California redrew their trustee districts early to get in compliance with new guidance from the California Voting Rights Act and under the threat of lawsuits.

In early 2020, KCCD went through redistricting to convert from at-large districts to specific areas to comply with the California Voting Rights Act. In 2018, KHSD heavily revamped its trustee areas. The Dolores Huerta Foundation and communities in south Kern said the map diluted the power of Latinos in violation of the federal Voting Rights Act.

Leoni told trustees at BCSD that though there are some federal and state parameters from legislation and state law, it is the board's discretion to decide how heavily it wants to redraw boundaries.

"That will necessitate some pretty significant changes," Mitchell told trustees.

The deviation between District 7 and District 4 is 31.8 percent, far above the 10 percent threshold. Other districts have wide deviations, as well.

Mitchell noted that three of the seven districts have majorities of citizens of voting age who are Latino, which was something taken into account during the last redrawing. He noted that six of the districts convene in Bakersfield.

Mitchell outlined a schedule for the board. He recommended Dec. 16 as a good time for the board to take a deeper dive into the redistricting process, since that is when the county would be finished with its own boundaries. January would be a good time to discuss a draft of maps. February would mark the final passage of the trustee area maps before they're sent on.

During Leoni's presentation at the Sept. 7 board meeting, she noted that KHSD's trustee boundaries were given a thorough hearing when they were recently redrawn.

Board President Jeff Flores said he was interested in making "cosmetic changes" to balance the population, because of the recent process.

"We did proactively redraw the lines in advance of the Census in 2018, like you said, and it did serve the district well," he said. "Most of the heavy lifting has been done."

Leoni did note that there were two districts that needed to be balanced based on preliminary data. Area 1, which is 9.28 percent over the median, and Area 2, which is 5.26 under the median. That's a 14.56 percent spread. Area 1 is the northern part of district from Frontier to the Kern River Valley, represented by trustee Cynthia Brakeman. Area 2, represented by Flores, covers east Bakersfield.

Leoni also advised the board to consider Area 4, slightly underpopulated, and Area 5, slightly overpopulated, because they are nearing 10 percent deviation. Area 4, represented by Janice Graves, is an L-shaped territory that includes Bakersfield High School and Stockdale. Area 5, represented by Bryan Batey, covers the swath from West High to Ridgeview High.

BCSD is one of the few major districts that didn't redraw its trustee areas early.

However, Leoni said that the board areas as drawn had a lot of benefits. The board has a history of electing minority candidates. Four of the districts are majority Latino districts. The boundaries also take into account school district attendance areas, she added.

There is one disparity between two areas, but she demonstrated how moving one small part of a boundary line could solve the problem.

"One of the questions is for the district, 'Does this require us to fully adjust all of the trustee areas to all of these small deviations? Or can we just look at where the problem is and fix it there?'" Leoni said. "I'm here to tell you it's your choice."

Representatives from the Dolores Huerta Foundation attended the meeting on Tuesday and asked for transparency in the process. They offered up a heavily redrawn map that they said would eliminate some of the "zig zags" between the areas. They offered it up as a starting point, but they asked the community to get engaged in the process.

Lori Pesante, director of civic engagement and government relations, said that the foundation is hosting weekly meetings on Wednesdays for community members interested in the redistricting process in schools.

Redistricting Partners offered a public presentation to the Kern Community College District board on the redistricting process.