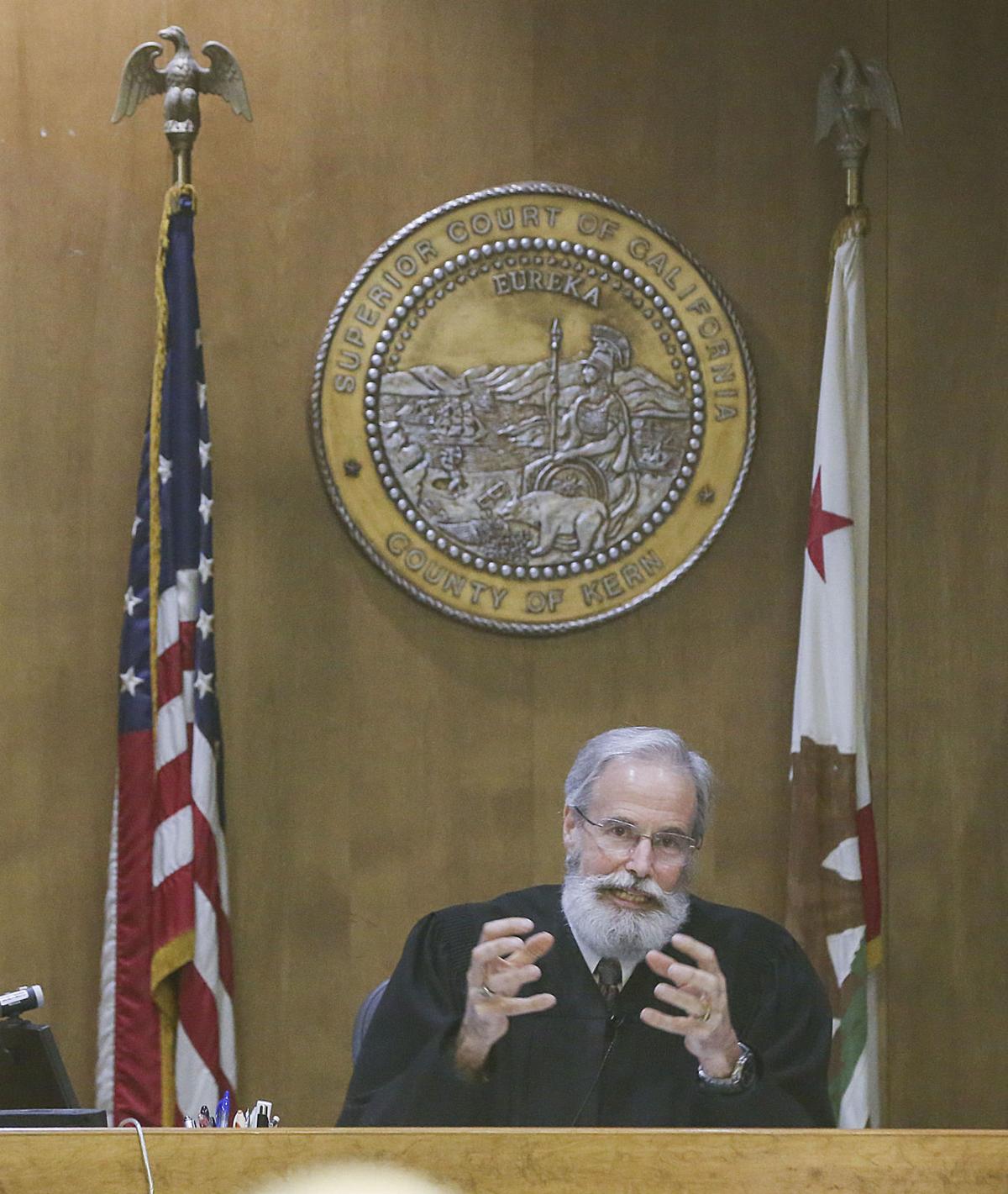 Judge David R. Lampe at a hearing in the case involving Tastries Bakery, which is now the subject of a lawsuit filed by the state. 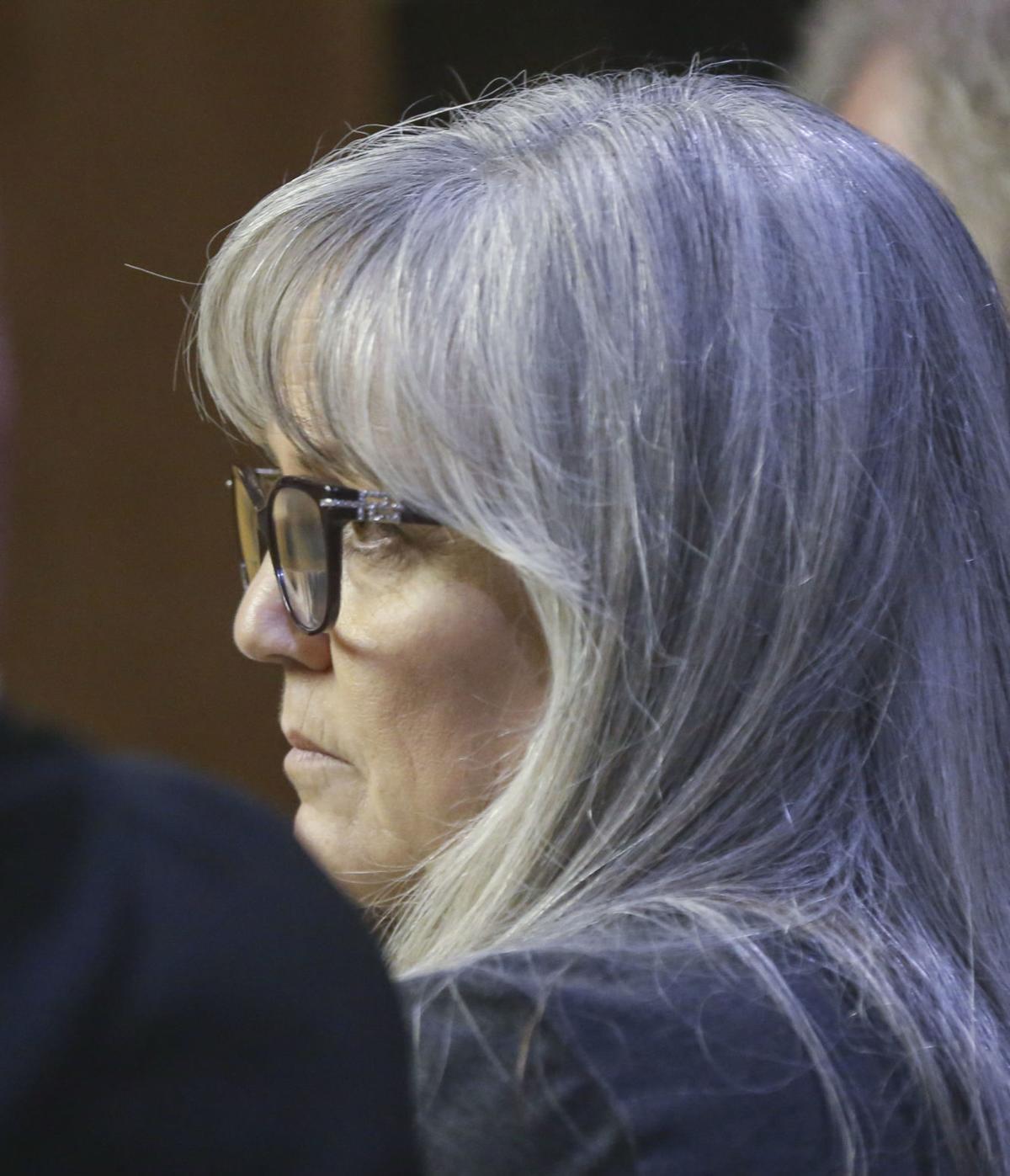 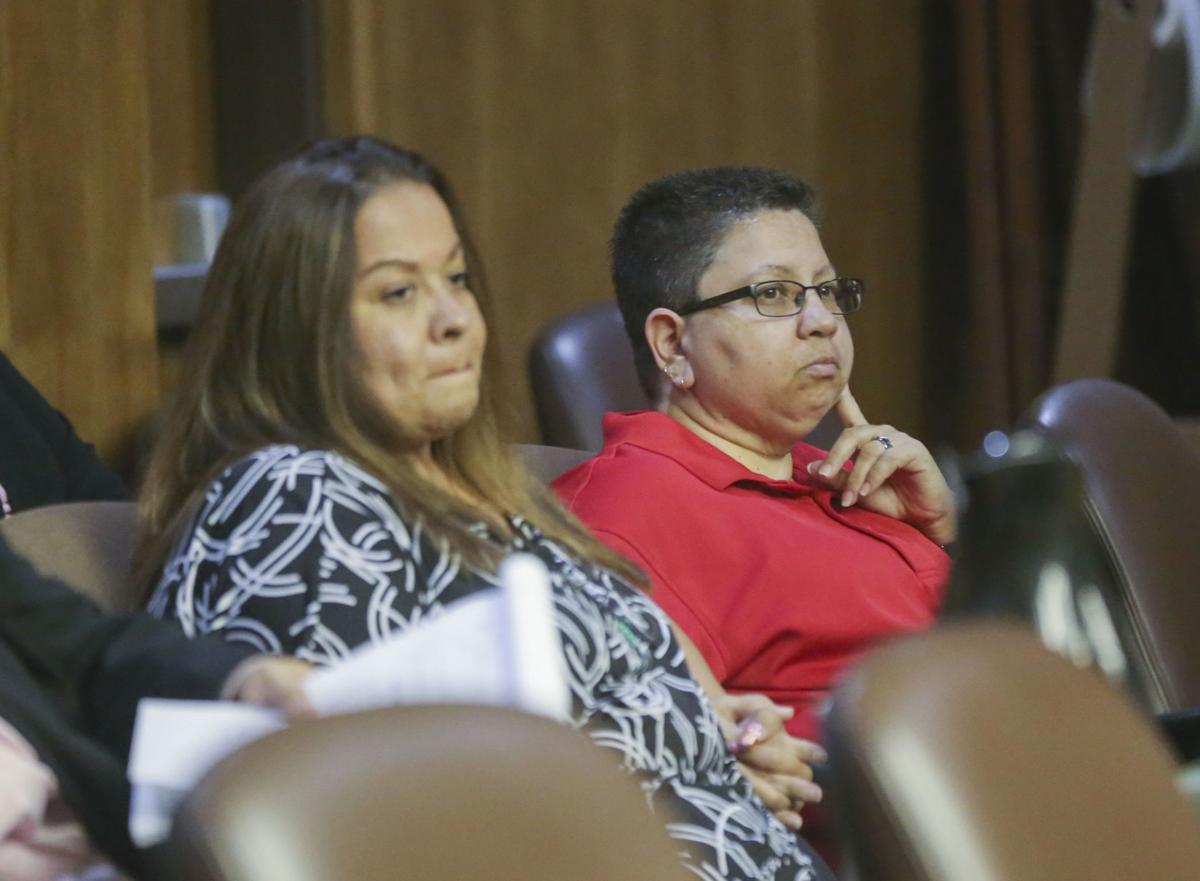 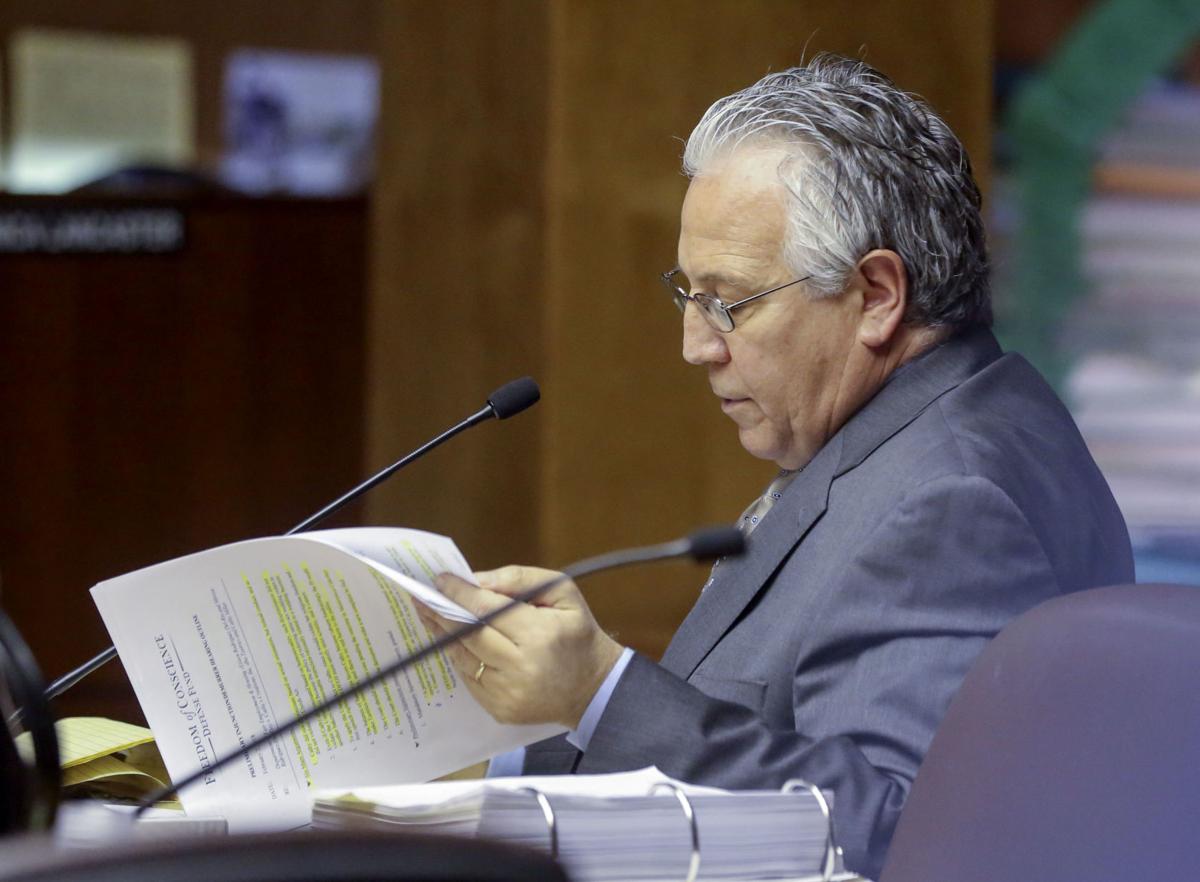 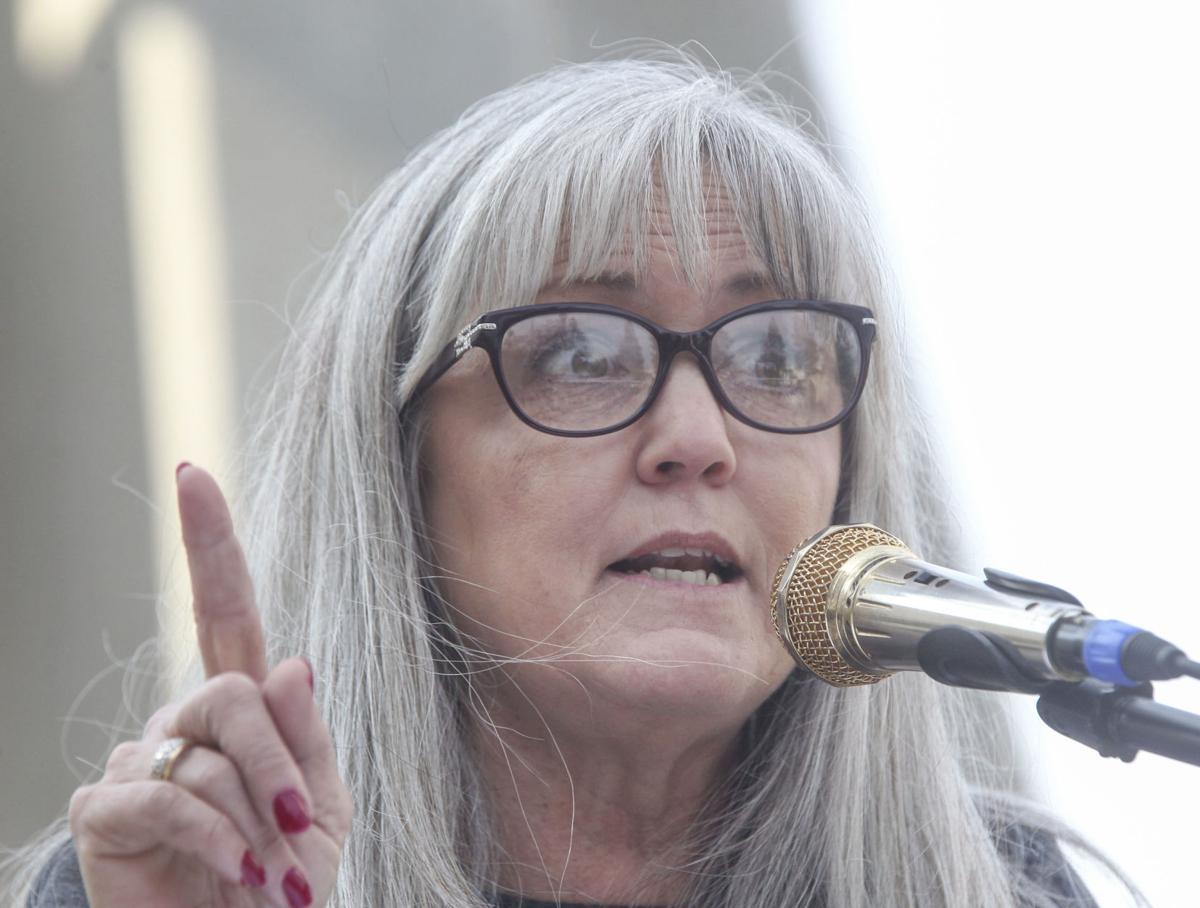 "I would hope that we as Americans that we can respect others beliefs and understand it is possible to live in a society where those that have strong religious convictions can honor God in every aspect of their life and their work, and still love others who may not have those same convictions," said Cathy Miller, Tastries Bakery owner, at a noontime prayer meeting at the Liberty Bell. 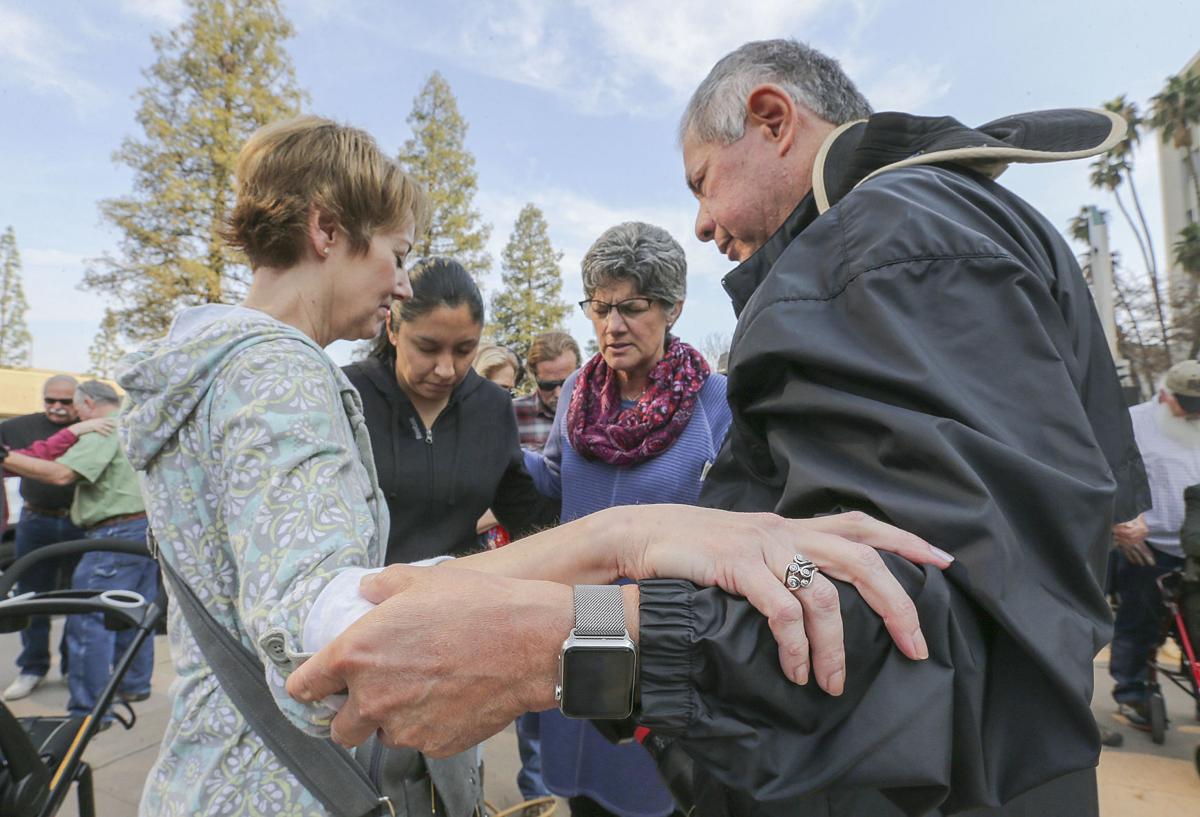 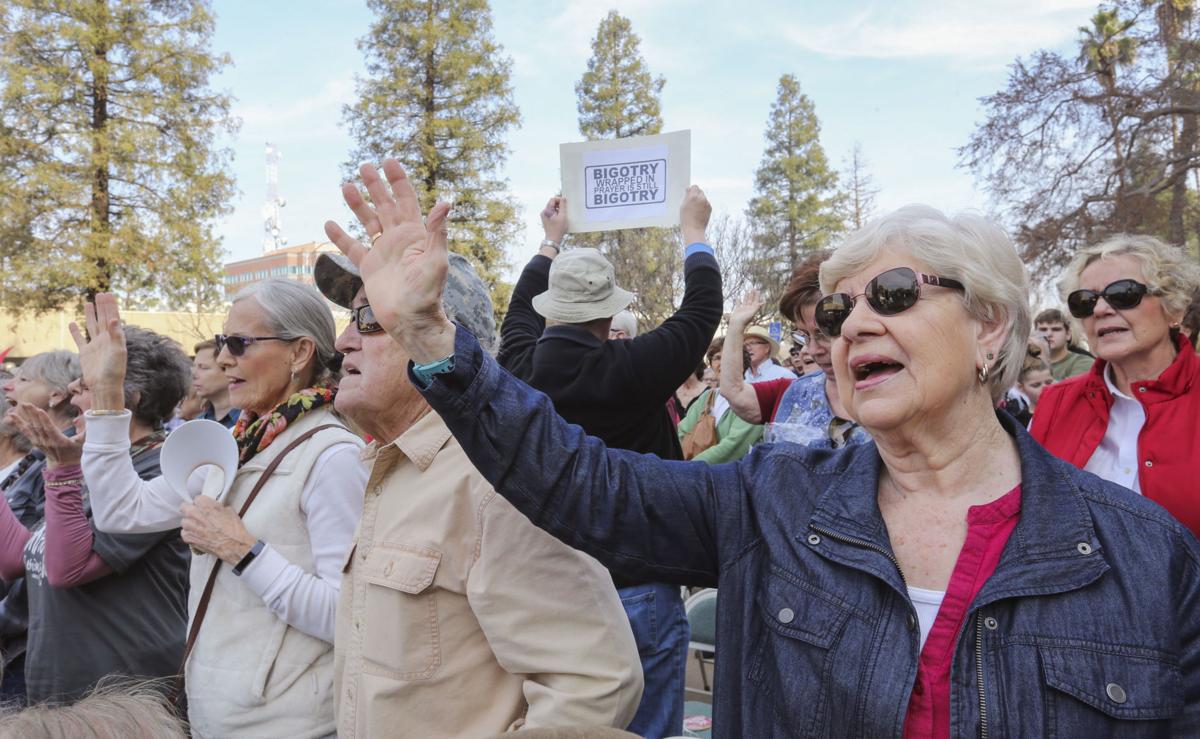 People hold their hands up at a prayer meeting at the Liberty Bell in support of Tastries Bakery owner Cathy Miller.

Judge David R. Lampe at a hearing in the case involving Tastries Bakery, which is now the subject of a lawsuit filed by the state.

"I would hope that we as Americans that we can respect others beliefs and understand it is possible to live in a society where those that have strong religious convictions can honor God in every aspect of their life and their work, and still love others who may not have those same convictions," said Cathy Miller, Tastries Bakery owner, at a noontime prayer meeting at the Liberty Bell.

People hold their hands up at a prayer meeting at the Liberty Bell in support of Tastries Bakery owner Cathy Miller.

But his ruling, on a motion for preliminary injunction, only leaves Miller alone until the full case comes to trial. The next hearing on the case is set for June. But Miller's attorney said he will move for dismissal of the case immediately because of the strength of Lampe's ruling.

Lampe's ruling relied heavily on the First Amendment to the Constitution.

“The State cannot succeed on the facts presented as a matter of law. The right to freedom of speech under the First Amendment outweighs the State’s interest in ensuring a freely accessible marketplace,” Lampe wrote in his ruling on Monday. “The right of freedom of thought guaranteed by the First Amendment includes the right to speak, and the right to refrain from speaking. Sometimes the most profound protest is silence.”

The case, which has received national attention, began in August when Miller – a conservative Christian – refused to make a wedding cake for Mireya and Eileen Rodriguez-Del Rio.

Miller said it went against her Christian beliefs to make a cake for a same sex couple.

The Rodriguez-Del Rioses made a complaint to the California Department of Fair Employment and Housing that Miller had violated the Unruh Civil Rights Act.

The Act prohibits public businesses from denying service to anyone on the basis of a number of characteristics including race, gender, religion or sexual orientation.

Lawyers for DFEH filed suit against Tastries and Miller, who was defended pro-bono by the Freedom of Conscience Defense Fund.

Miller, at a prayer rally before the court hearing on Friday, said God gave her the ability to make beautiful cakes and she is committed to using it in the way she believes God wants her to.

“If we’re not able to follow our conscience we’re no longer able to be who God created us to be,” Miller said. “I am incapable of doing something that would hurt my Lord and Savior.”

In court her attorney, Charles LiMandri, made the argument that Miller’s free speech rights and her right to free expression of religion trump the state’s arguments that she violated a law against discrimination.

“It’s a work of art as far as my client is concerned,” LiMandri said. “In my client’s mind this is a free exercise case."

His argument, however was closely tied to Miller’s role as an artist in producing cakes which – he found – are protected artistic expression.

“A wedding cake is not just a cake in a Free Speech analysis. It is an artistic expression by the person making it that is to be used traditionally as a centerpiece in the celebration of a marriage,” Lampe wrote. “There could not be a greater form of expressive conduct. Here, Rodriguez—Del Rios plan to engage in speech. They plan a celebration to declare the validity of their marital union and their enduring love for one another. The State asks this court to compel Miller against her will and religion to allow her artistic expression in celebration of marriage to be co-opted to promote the message desired by same-sex marital partners, and with which Miller disagrees.”

But Lampe wrote that his ruling was tied closely to the fact that Miller was being asked to create a cake for an event.

And he cautioned that religion does not give businesses a right to refuse service to groups protected by the Unruh Act in other circumstances.

“A retail tire shop may not refuse to sell a tire because the owner does not want to sell tires to same sex couples. There is nothing sacred or expressive about a tire. No artist, having placed their work for public sale, may refuse to sell for an unlawful discriminatory purpose. No baker may place their wares in a public display case, open their shop, and then refuse to sell because of race, religion, gender, or gender identification,” Lampe wrote.

His distinction, he said, is between the act of selling a product to a same-sex couple and creating a product for the same couple.

“The difference here is that the cake in question is not yet baked,” Lampe wrote. “The State is not petitioning the court to order defendants to sell a cake. The State asks this court to compel Miller to use her talents to design and create a cake she has not yet conceived with the knowledge that her work will be displayed in celebration of a marital union her religion forbids. For this court to force such compliance would do violence to the essentials of Free Speech guaranteed under the First Amendment.”

LiMandri expressed his satisfaction with the outcome in a statement Monday evening.

“This is a significant victory for faith and freedom because the judge indicated in his ruling that the State cannot succeed in this case as a matter of law. No doubt the California officials will continue their persecution of Cathy, but it is clear that she has the Constitution on her side,” he wrote.

Miller said Tuesday she was surprised and overjoyed by the ruling.

“We were so joyful. We weren’t expecting it to be so soon. We started screaming and praising God because we felt we had been heard,” she said.

She said she respected the distinction Lampe made between the sales of a cake and the creation of one.

“I am very happy to serve everything from my cases to anybody,” she said. “But I cannot be a part of a celebration that goes against my lord and savior.”

Miller thanked her lawyers who she called, “amazing men of god.”

"We are disappointed but not surprised by ruling against the preliminary injunction. Bakersfield and Kern County in general is very conservative and that unfortunately includes some of the judges. But it’s not over. Our fight against bigotry and discrimination is only beginning," she wrote in an e-mail.