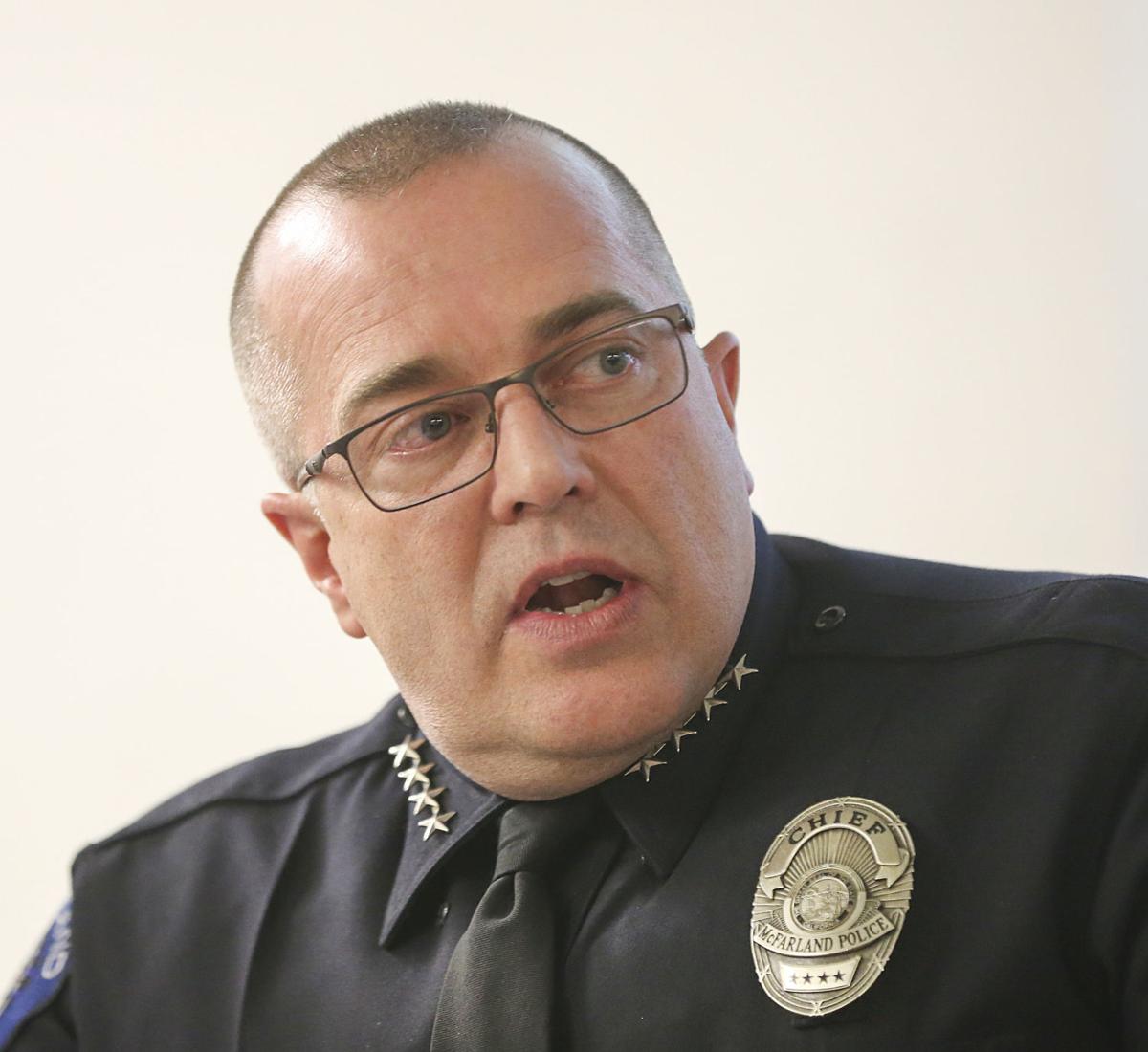 Arvin police chief Scot Kimble appears to have had his share of controversy during his career. Kimble became Arvin's top cop in April and before that he was police chief in McFarland. Prior to being hired in McFarland, Kimble worked for the city of Banning Police Department.

Kimble is currently under investigation by the Kern County District Attorney's office, but the DA's office isn't saying much.

"We do have an active investigation as to his time in McFarland," said DA spokesman Joe Kinzel.

While the DA's office is being tight lipped about why, a lawsuit filed last year by former McFarland police officer Laurence Keegan against his then-boss Kimble and the city of McFarland gives some indication of what may be behind the investigation. Keegan is a former contractor who claims he felt pressured by Kimble to remodel his San Bernardino home which Kimble was trying to sell. According to the lawsuit Keegan was a probationary McFarland police officer at the time during which he could have been fired at any time without cause.

"Feeling he had no choice, (Keegan) performed work on Kimble's (house) with the expectation that he would at least be paid for doing so," states the court document.

It adds that work done on Kimble's house included remodeling a bathroom, replacing countertops and repairing a retaining wall among other things. A conservative estimate of what Keegan would have charged for his work is at least $20,000 discounted rate just for the labor. The suit claims however, that things changed once Keegan became a full-time employee, alleging Kimble stopped paying Keegan for his work and that Kimble began having Keegan work on a second property in Bakersfield.

Now to the crux of the matter: Keegan alleges Kimble tried to use police department overtime funds to compensate him.

"Kimble had also, on more than one occasion, unbeknownst to (Keegan), filled out an overtime slip for time (Keegan) spent working at the Chief's house," states the lawsuit. Further, Keegan says he reported all this to McFarland city officials including to then city manager John Wooner and that the city conducted an investigation. I attempted to get records of that investigation under a California Public Records Act request, but was denied by McFarland city attorney Tom Schroeder. The city's lawyer claims any complaints Keegan may have made against Kimble with the city are exempt from disclosure under the Public Officers Bill of Rights.

The lawsuit asked for damages, alleging Kimble retaliated against Keegan for having reported the alleged misconduct to city officials.

It claims Kimble targeted Keegan for retribution by pressuring another officer to write a negative evaluation of his work performance. Further, it claimed Kimble and the city failed to pay for overtime under the Fair Labor Standard Act.

Keegan and the city of McFarland settled the lawsuit with the city agreeing to pay Keegan $65,000. The city admitted no wrongdoing and Keegan agreed not to pursue any further legal action against either Kimble or the city. Messages left for Kimble at Arvin police headquarters for a comment on all this were not returned. No luck either on messages and texts sent to his work cell phone.

Kimble's latest brush with the law is detailed in recently released investigative articles titled, "California's Criminal Cops: Who they are, what they did, and why some are still working." It was a six month probe spearheaded by the Investigative Reporting Program at UC Berkeley.

One of those investigative pieces centered on McFarland and its hiring practices of cops with criminal records. That story by the way, was detailed in these same pages when I wrote about it in The Californian in 2011. But this recent investigation goes much deeper than just McFarland. Another one time local journalist, ex-reporter for KGET-17 Katey Rusch, is part of the program at UC Berkeley. Just as when she was in Bakersfield, Rusch continues to do great work.

I reached out to Arvin city leaders to get their take on Kimble's past legal troubles as detailed in the investigative article and asked if there was any concern now about Kimble being at the helm.

I received this response from Arvin city manager Jerry Breckinridge:

"The City retained a professional outside investigator to conduct an independent and rigorous pre-employment investigation and background check regarding Chief Kimble. Pre-employment investigations are standard practice for public agency sworn employees. While the City is limited by law regarding what information can be provided regarding background checks, suffice it to say that based on the findings of the independent investigation, the City found no disabling pre-employment history. The decision to hire Chief Kimble was therefore based upon his credentials and work experience and interviews. As with any other official of the City, if there are ever new allegations of misconduct they will be addressed where and when appropriate based on the actual facts."

You can read "California's Criminal Cops," at this link: investigativereportingprogram.com.