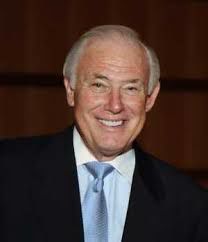 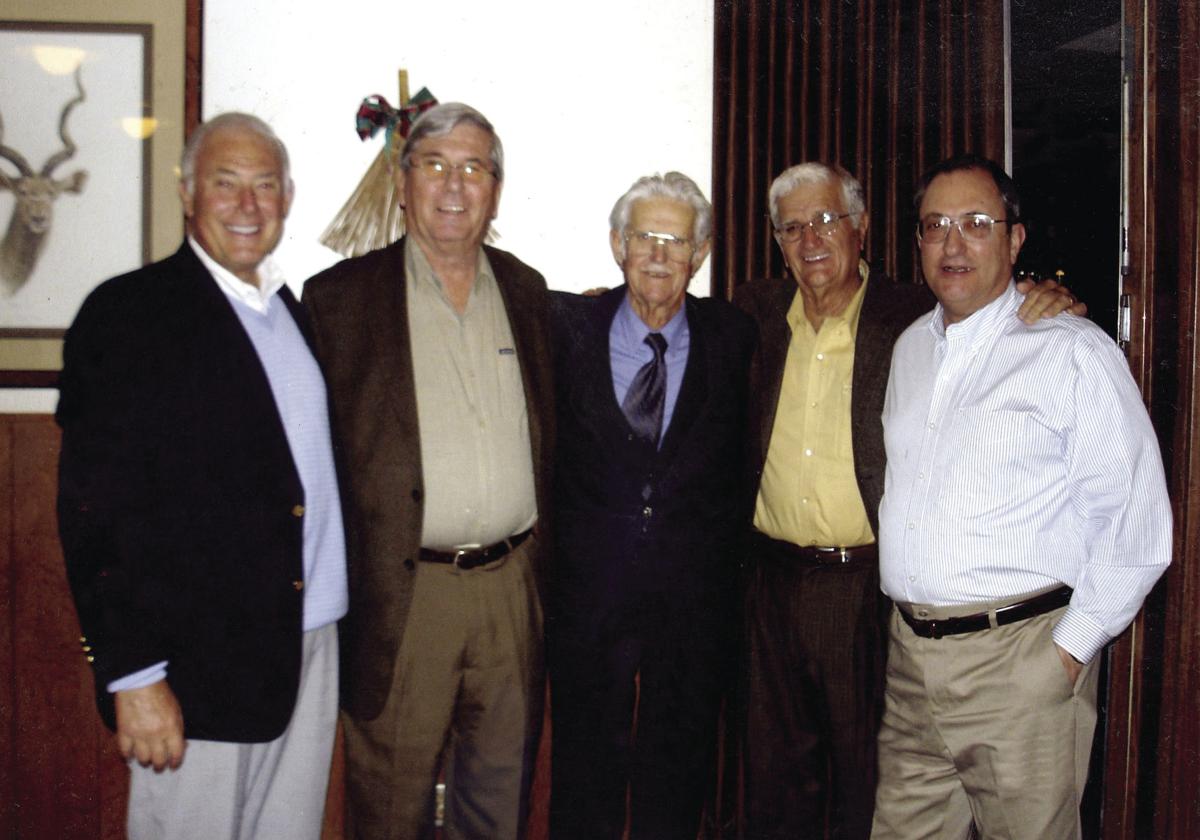 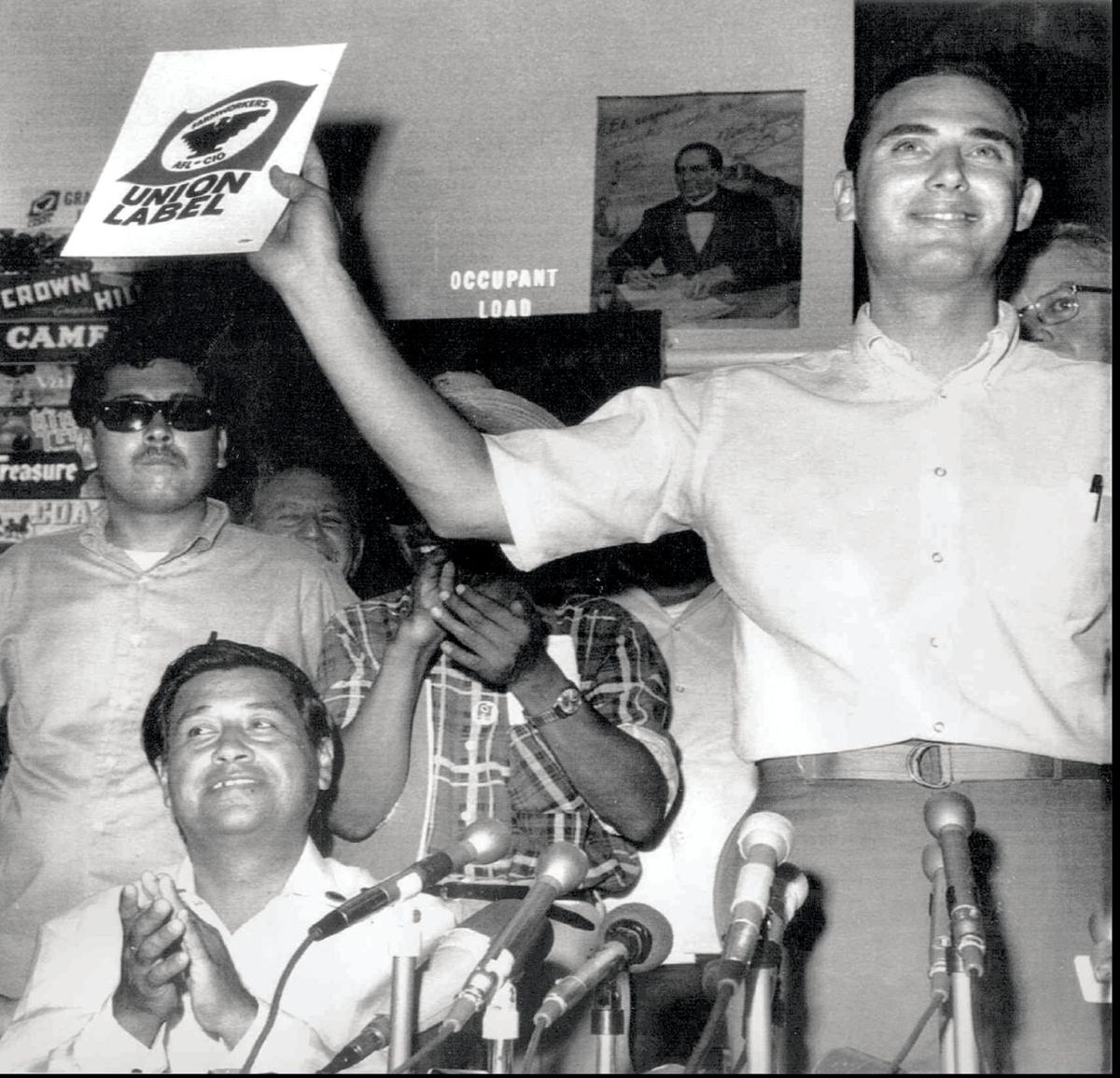 Cesar Chavez applauds as John Giumarra Jr. holds a copy of the Union Label during a meeting of the United Farm Workers in Delano in 1970.

Cesar Chavez applauds as John Giumarra Jr. holds a copy of the Union Label during a meeting of the United Farm Workers in Delano in 1970.

Mike Rogers admired his boss, John Giumarra Jr., and he envied him a little too. How could a man in his 70s appear so fresh, so alive, even in moments of stress and fatigue, while lesser mortals sagged?

“I traveled to South America with him one year,” said Rogers, whom Giumarra personally hired to run his East Coast operations eight years ago. “We were on 12 planes in 10 days. I would come off the plane — I’m 53 — just beat down and exhausted. He’d walk off that plane looking like was ready for anything. “

That was John Giumarra Jr., scion of one of the world’s leading table grape growers — unruffled, refined and prepared.

Giumarra, the president and CEO of Giumarra Vineyards, died Sunday afternoon of natural causes, according to his family. He was 78.

History will remember Giumarra as a chief combatant in the epic battle between California grape growers and the United Farm Workers of Cesar Chavez. And with good reason: Their standoff, for a time a nightly staple of TV network news, brought about the Great Delano Grape Strike of 1965 and ultimately a worldwide boycott of California table grapes.

But Giumarra was a highly influential grower and industry leader who left his mark on agriculture and on his Kern County home in ways that went well beyond farm labor relations.

Giumarra was the third-generation owner of a company founded in 1922 by Salvadore and Giuseppe Giumarra as the Giumarra Bros. Fruit Co., based in Los Angeles. Giumarra Vineyards Corp., as it became known, grew exponentially from there. The family bought its first Kern County land in 1939.

Giumarra earned his undergraduate degree in business administration from the University of California at Berkeley and a Juris Doctor degree from Stanford University. He was a Book Review Editor of the Stanford Law Review, and attended UCLA’s Graduate School of Business Administration.

After graduation from Stanford Law, Giumarra went to work for a Newport Beach law firm. But he answered the call when his father and uncles asked him to move back to Bakersfield to help with legal matters at Giumarra Vineyards.

Giumarra served as in-house counsel, negotiating contracts with chain stores, growers, exporters, and licensees on behalf of the family business and its related entities. He was also involved in negotiations on behalf of the industry with U.S. and foreign government officials.

“John was a talented leader and a powerful mentor,” the Giumarra family said in a statement released Tuesday afternoon. “His many years of hard work, dedication, and passion for both Giumarra Vineyards, and as an industry advocate, will always be remembered. His ability to devote himself not only to his work life but to make his family a priority will serve as an inspiration for those following him.

“He worked hard, he played hard, and did it all with an admirable grace and zest.”

Giumarra also become the face of the company. His cousin Sal Giumarra, as president, led the farming operations, but John was the public persona. He promoted the Grape King and Arra labels, and bestowed the name on Giumarra’s ARRA 15 Sweeties variety. As a marketer, he formed hundreds of business relationships with buyers and executives within the industry.

It helped that he loved golf.

And it helped that he was the consummate dinner party host.

Derrick Jenkins, director of produce and floral for Wakefern Food Corp., and a friend for 35 years, credits Giumarra with “numerous firsts in my life” — playing golf being just one.

They enjoyed “a myriad of shared meals that became celebrated events will resonate with me forever,” Jenkins said.

Giumarra and his cousins effected a major change for the company in the 1980s when they looked to the southern hemisphere and started importing Chilean-grown grapes, recognizing that off-season fruit had great potential for the U.S. market. Giumarra signed his first marketing contract with Frucentro S.A. in Chile, a relationship that remains intact. Other agreements followed.

Working with Don Corsaro, now chairman of the Giumarra Companies, the import program grew to become one of the largest in the industry, with arrivals on both U.S. coasts.

Today, Giumarra’s farming division has operations in Kern and Tulare counties, grows apples in Wanatchee, Wash., and maintains partnerships around the world. It imports fruit from Chile, including grapes, peaches, pears, plums, blueberries, avocados and kiwi.

Giumarra’s father John Sr. ran the Giumarra Vineyards Winery, and from an early age, John Jr. had a passion for all things wine-related — including wine-making process. He became actively involved in the wine industry, and was on the wine tasting panel of the Los Angeles Times newspaper for many years. He served as chairman of the Wine Institute from 1992-1993, and later the Board of Trustees of the Culinary Institute of America, the premier culinary teaching institution in the United States, where he also served as finance committee chairman.

In the 1990s, Giumarra joined the Karniel family to form a grape breeding collaboration, the Agricultural Research & Development Corp. He was instrumental in working on the early licensing and contract negotiations for the ARRA varieties, including Sweeties, Passion Fire, Passion Punch, Mystic Dream and Sugar Drop.

In 2015 he became the president of Giumarra Vineyards, and actively began a program of vineyard rejuvenation and varietal renewal to position the company for future success.

Kathleen Nave, president and CEO of the California Table Grape Commission, called him a “Champion for the Industry.”

He put in 33 years with the California Table Grape Commission, where he served as both chairman of the board of directors and executive committee chairman. He also served 23 years as chair of the export committee and as a member of the intellectual property committee.

In his spare time, Giumarra helped raise millions of dollars for CSU Bakersfield as chairman of the annual CSUB Athletics Spring BBQ, a role he filled since its inception in 1972.

“John Jr. was very charismatic and a diverse leader,” said John Corsaro, CEO of the Giumarra Companies. “... But at the end of the day, what I most admired about John Jr. was his dedication to his family.”

“I am indebted to him as a role model and will do my best to pay homage to his legacy by emulating his character in my own life,” Jenkins said.