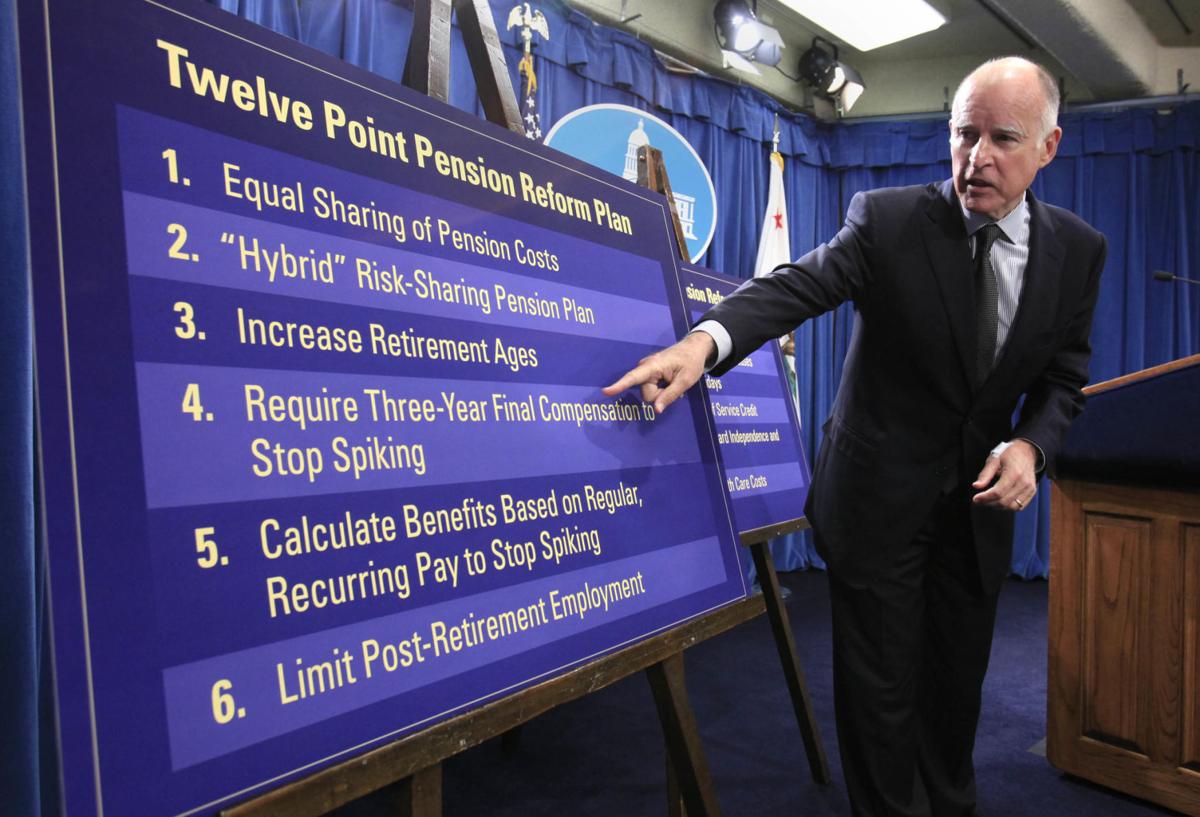 Gov. Jerry Brown has described pension reform as a “moral obligation.” Above, he outlines his 12-point plan in October 2011. 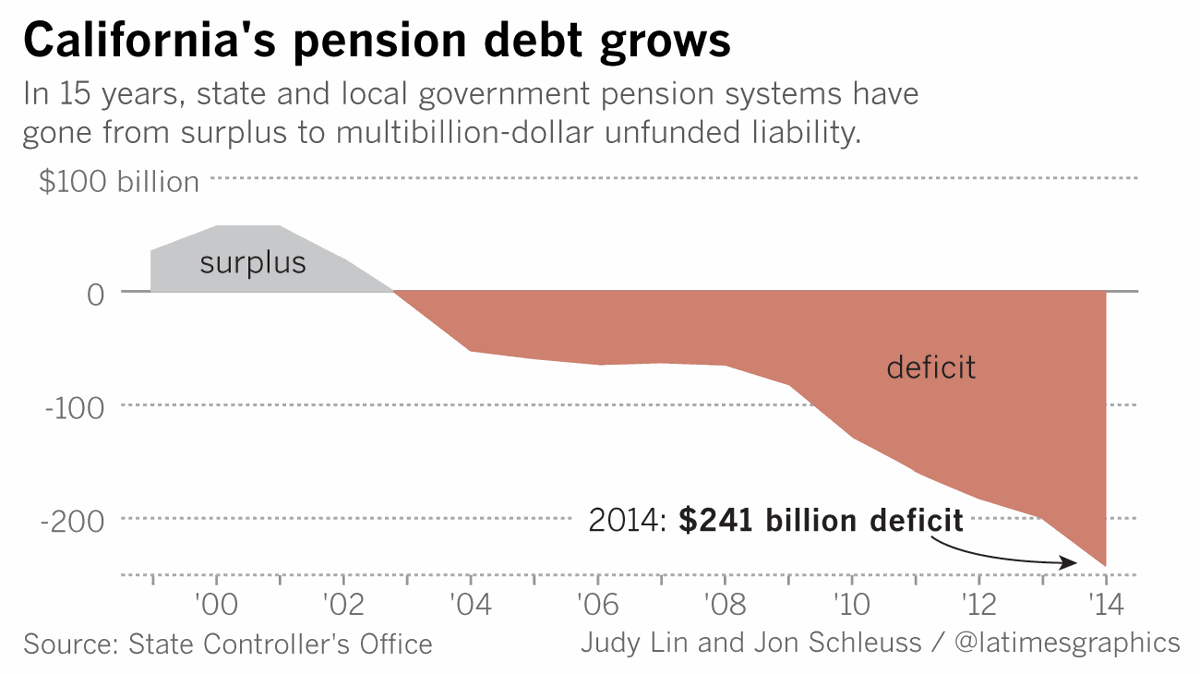 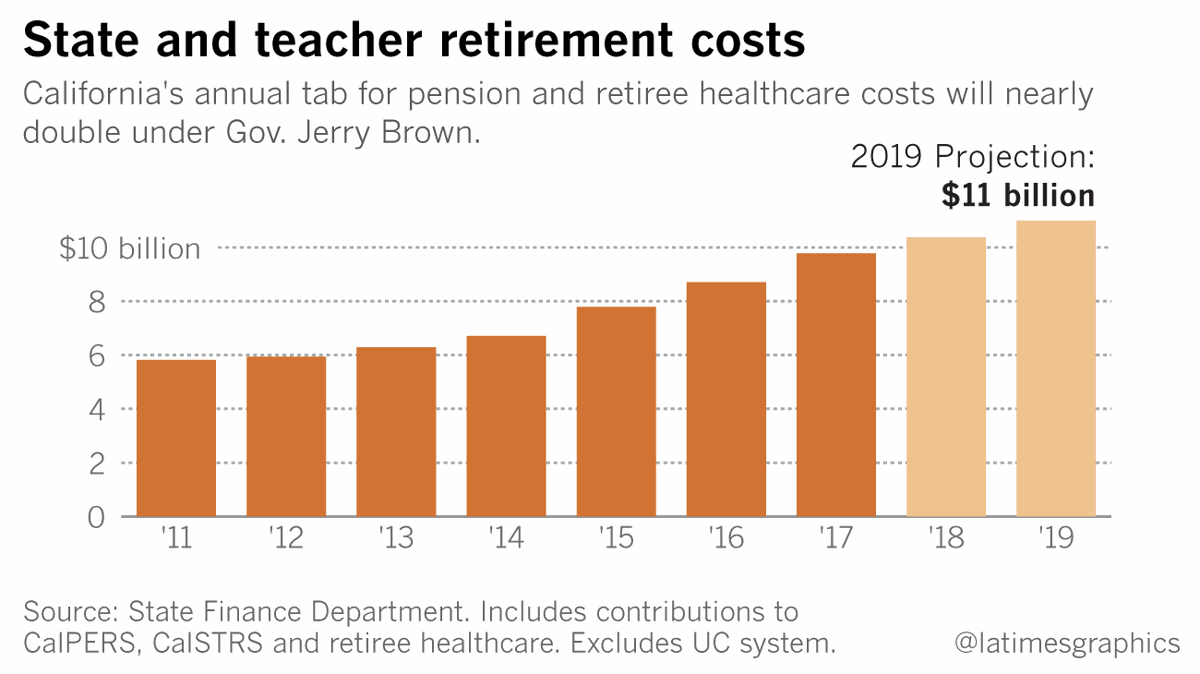 Gov. Jerry Brown has described pension reform as a “moral obligation.” Above, he outlines his 12-point plan in October 2011.

SACRAMENTO — A year after his 2010 election, Gov. Jerry Brown made a rare appearance at a legislative committee hearing to confront lawmakers about the steep cost of public employee pensions — and to demand that they pass his 12-point pension overhaul.

“We don’t really have too much choice here,” Brown said in a commanding tone as he addressed a special panel in the Capitol.

State lawmakers eventually passed some of Brown’s proposals, including raising the retirement age for new employees. But they rejected those with biggest savings potential — notably his plan for a hybrid retirement system for new employees that would combine smaller pensions with 401k-style savings plans.

Instead, legislators chose to tinker at the margins of pension reform. Although Brown touted it as the “biggest rollback to public pension benefits in the history of California,” the package of modest changes he signed into law in 2012 has done little to slow the growth of retirement costs.

The state’s annual bill for retirement obligations is expected to reach $11 billion by the time Brown leaves office in January 2019 — nearly double what it was eight years earlier.

Since the 2012 law applied mainly to newly hired employees, savings will trickle in slowly over many years. Pension contributions required from state and local governments will continue to increase — although they are estimated to be 1 percent to 5 percent less than they would have been without the changes.

Total savings from the Public Employee Pension Reform Act of 2012 are estimated at $28 to $38 billion over 30 years for the state’s main pension fund, the California Public Employees’ Retirement System, and $22.7 billion for the teachers’ pension fund.

The savings are a fraction of the two plans’ unfunded liability — the gap between the benefits owed to current and future retirees and the money set aside to pay for them. CalPERS’ unfunded liability is estimated at $93 billion. For the teachers’ fund, it is $76 billion.

The fate of Brown’s plan illustrates the deep difficulty of reining in California’s public retirement costs. Brown’s disappointment is all the more stark given that the political stars were aligned that year: the governor was popular with voters, enjoyed good relations with public employee unions and had a supermajority of his party in power in the Legislature.

Steep cuts in state spending during the Great Recession, along with a highly publicized scandal in Bell, Calif., where city leaders arranged lavish salaries and pensions for themselves, had generated momentum for pension reform.

Still, the bulk of what Brown got were the easiest fixes. The big-dollar items proved politically unattainable.

The dynamic is unchanged today.

Democratic legislators and labor officials are not as concerned as the governor is about rising pension costs.

“Unfunded liability is not the same thing as debt,” said Steve Maviglio, a longtime advisor to Democratic officeholders and a spokesman for Californians for Retirement Security, a labor coalition. “It’s a snapshot in time of where the system is.”

Democratic legislators also argue that taking guaranteed pensions away from public workers isn’t the right way to bridge inequities between public employees and those in the private sector, few of whom have pensions.

“There are those who say those in the public sector should not have pensions that are any better than those in the private sector, and while I understand that answer, I think the answer lies in trying to improve retirement security on the private-sector side,” said Darrell Steinberg, who was president of the state Senate when Brown made his push for pension reform.

Democratic lawmakers are strongly allied with public employee unions, for which pension protection is a top priority.

Public employee unions gave $12.5 million to Democratic candidates for the Legislature between 2010 and 2014, compared with $1 million for Republicans, according to the nonpartisan National Institute on Money in State Politics.

Every Democratic lawmaker elected in 2010 received campaign contributions from public sector unions, as did Brown.

“Let’s just be clear: The unions have a stranglehold on the Legislature,” said state Sen. Joel Anderson, R-San Diego, the only senator to vote against the pension reform bill.

Former state Sen. Joe Simitian, D-Palo Alto, who served on the special pension committee and is now a Santa Clara County supervisor, said the final package reflected the governor’s willingness to confront labor, something no single lawmaker could have done without fear of union retribution.

Assemblyman Warren Furutani, D-Gardena, then chair of the Assembly’s public employees and retirement committee, recalled there was tacit support from labor to close pension-spiking loopholes, but not to do much more than that.

“I was given a wink and a nod, saying ‘OK, let’s come up with something realistic here,’” said Furutani.

The Legislature eventually raised the age for retirement with full pension from 50 to 57 for newly hired public safety workers and from 55 to 67 for newly hired civil servants. Lawmakers banned workers from receiving retroactive pension increases and stopped practices such as hoarding vacation and sick time to inflate retirement calculations.

They also required minimum contributions from employees toward their pensions, to supplement the much-larger taxpayer-funded contributions.

These changes applied to most employees of the state, counties, cities and local districts. Not included were the University of California and cities that manage their own pension systems such as Los Angeles, San Francisco, Fresno, San Diego and San Jose.

Brown wanted the Legislature to do more, including adding more independent members to the board of CalPERS, which is dominated by labor representatives. But Democrats did not like the idea of handing the governor more authority. It would also have required voter approval.

Brown’s most ambitious proposal was the hybrid pension plan for new employees that would join traditional pensions and 401k-style plans, which help workers build up retirement savings but don’t guarantee any level of benefits. Brown said the hybrid system would pay retirees 75 percent of the salaries they collected when active.

“We were never going to go there because we didn’t believe in that,” said Steinberg, now mayor-elect of Sacramento. As an alternative to the hybrid, lawmakers approved a cap on the salary that could be used to calculate an employee’s pension.

State Sen. John Moorlach, R-Costa Mesa, who serves on the Senate Public Employment and Retirement Committee, said it was disappointing that Brown didn’t get all his reforms. “Maybe you’re never going to get perfect, so you settle for good,” Moorlach said.

Brown’s 12-point plan also called for public employees to contribute toward the cost of their retirement health benefits, however, lawmakers told the governor to negotiate the issue with labor unions.

So far, highway patrol officers, prison guards and engineers have agreed to make contributions but the largest state employee union, the Service Employees International Union Local 1000, has threatened a strike.

Judy Lin is a reporter at CALmatters, a nonprofit journalism venture in Sacramento covering state policy and politics.

The Los Angeles Times is collaborating with CALmatters, a nonprofit journalism venture, and Capital Public Radio to explore the consequences of an historic expansion of retirement benefits for California public employees.

A series of pension enhancements, beginning with a 1999 law known as SB 400, has created a huge gap between the state’s obligations to current and future retirees and the capacity of public pension funds to pay them.

Future articles will examine the impact of pension costs on local governments, the politics of pension reform and related subjects.

CALmatters, based in Sacramento, publishes explanatory journalism on state policy and politics. It is supported by foundations, companies and individual donors, all of whom must agree to respect the group’s editorial independence.

Capital Public Radio, also in Sacramento, is a donor-supported organization that distributes its journalism to outlets across California.

California promised public employees generous retirements. Will the courts give government a way out?

A case before the state Supreme Court could clear the way for reductions in public retiree benefits, which have become hugely expensive. But the outcome is “hard to predict.”

I'm really liking how the liberal L.A. keeps beating the drum about pension reform. The people in the private sector get nice raises and bonuses when the economy is booming. Public sector gets nothing. When economy is bad they cry because public sector stays the same. Can we say hypocrisy. Why don't we see any articles on how much we spend on welfare a year or how badly the system is being taken advantage of by the loosers that use it instead of getting off the couch and putting the bong down. Or maybe an article about how much welfare and other money being spent on illegals and the mayor beating his gums on how he is going to protect his illegals by violating federal law. Guess the times isn't worried about restoring the trust of all readers just ones that earn there money. Get a clue, I personally am sick of hearing it and I'm guessing I'm not alone.