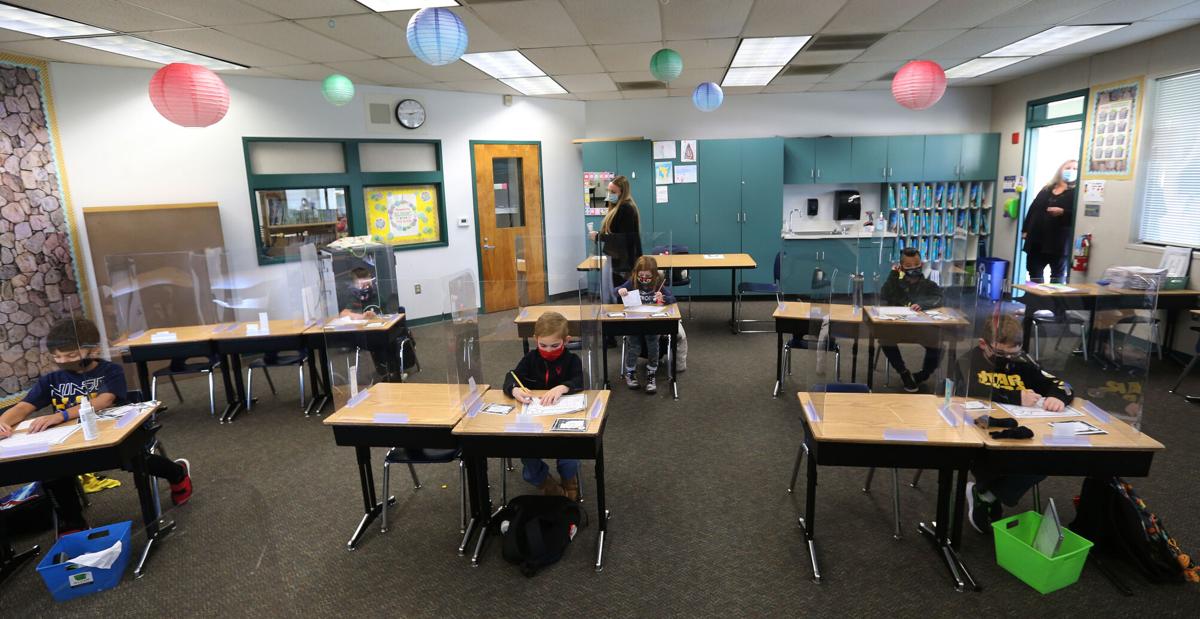 Independence Elementary School second grade teacher Morgan Greene checks on student progress during a math lesson during the morning session of her class on Thursday. 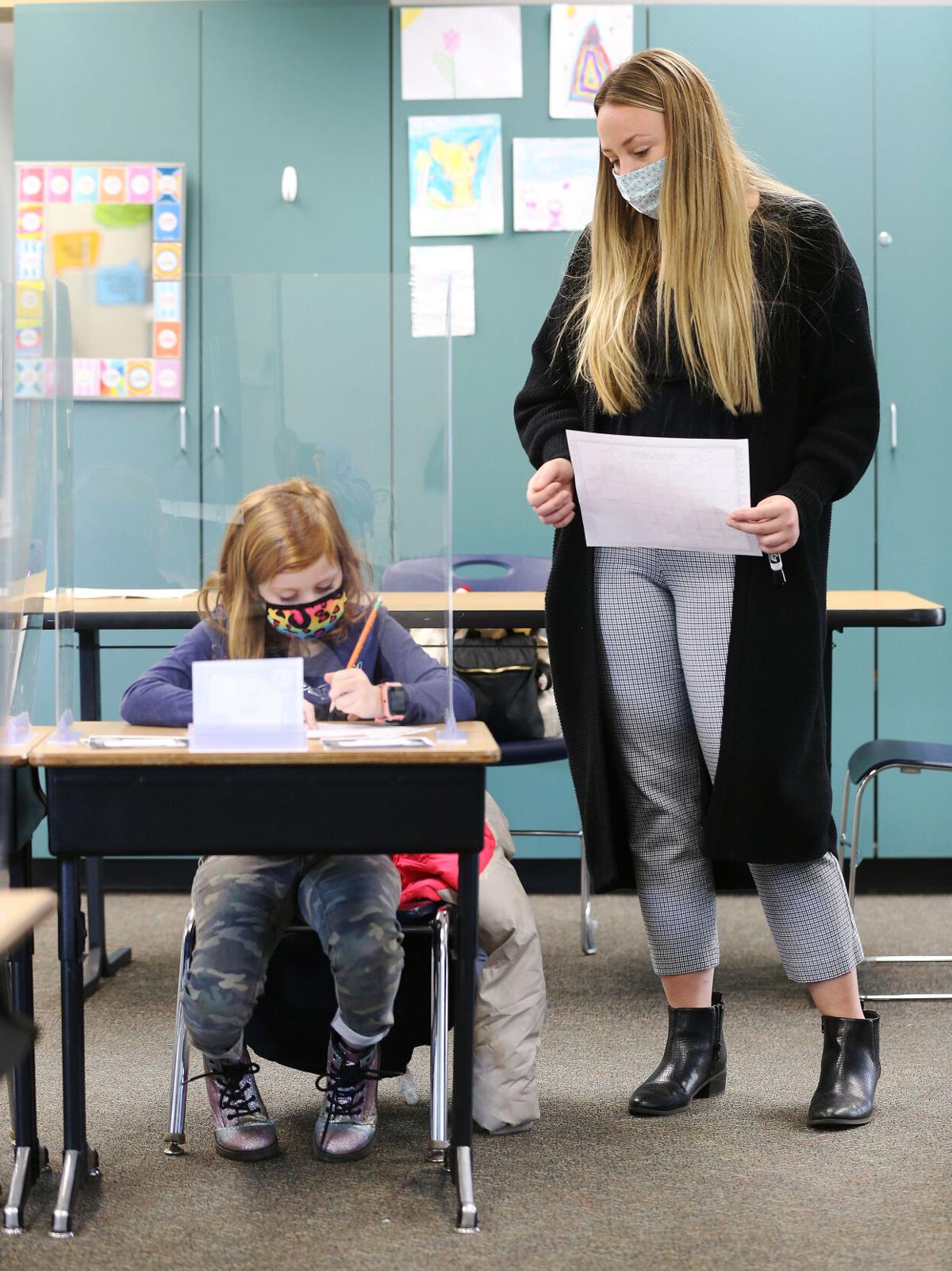 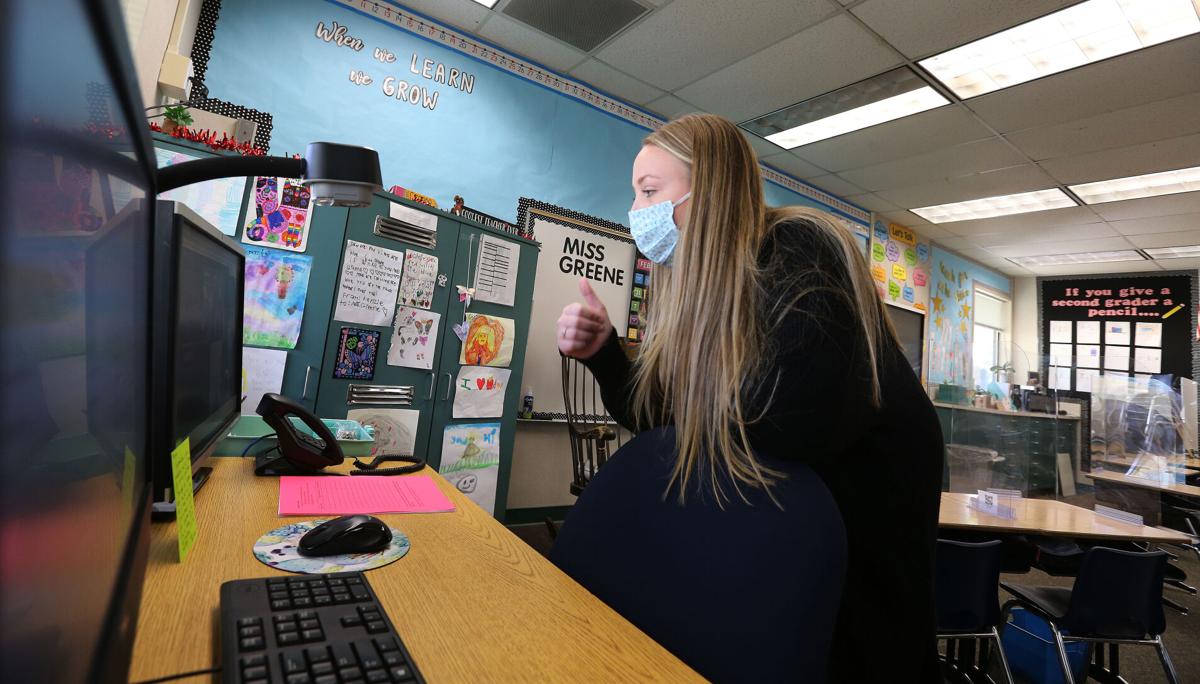 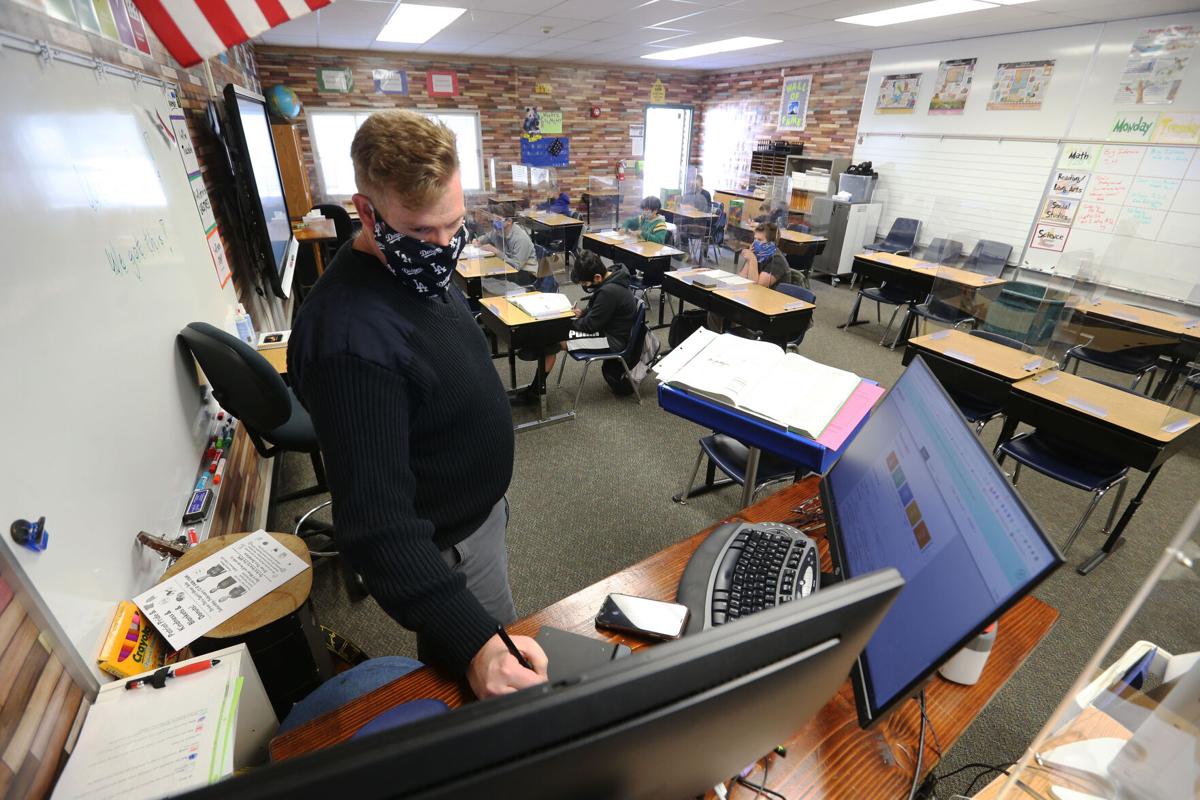 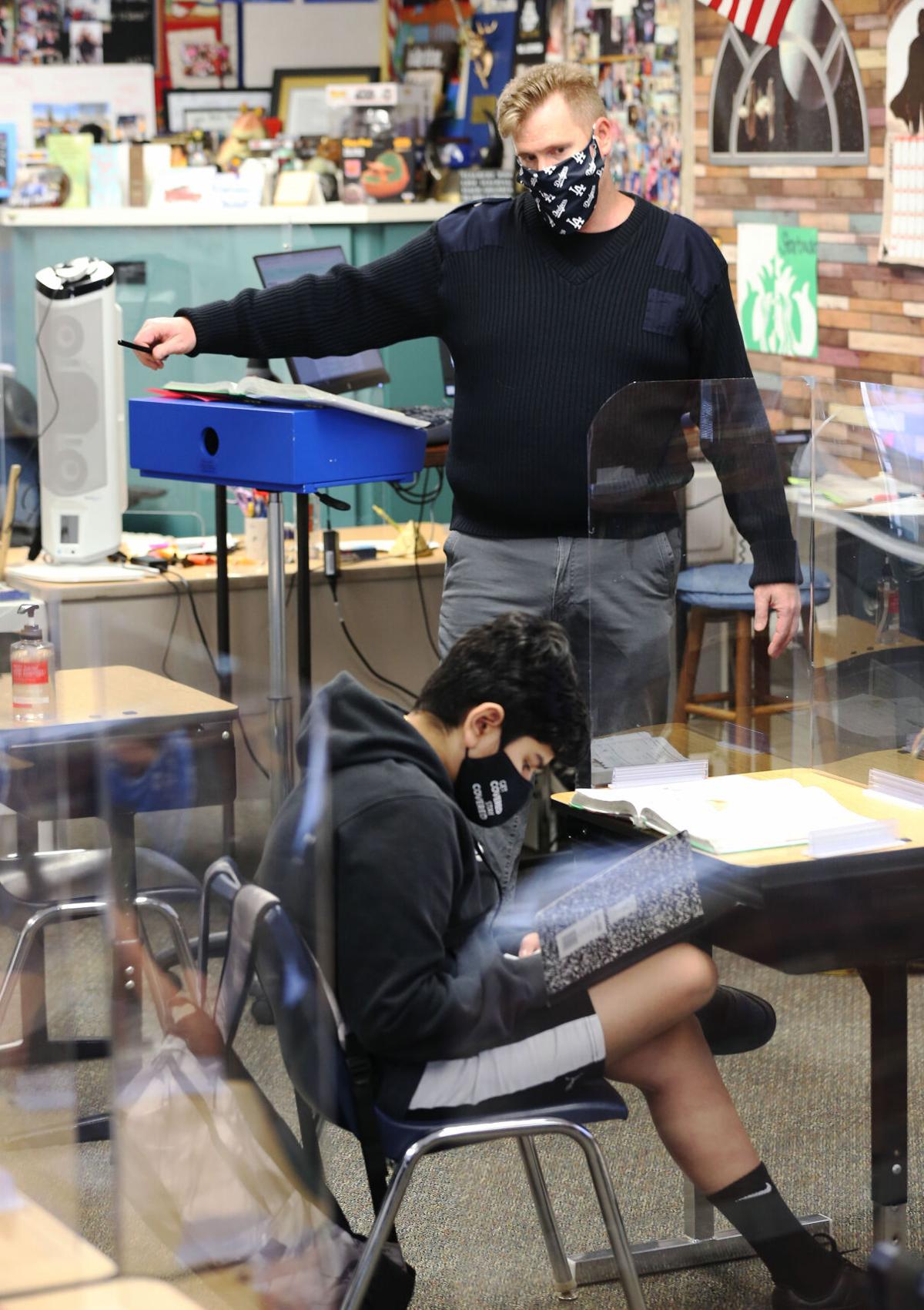 Independence Elementary sixth grade teacher Erik Kramer calls on a student during a math lesson last week at the school. 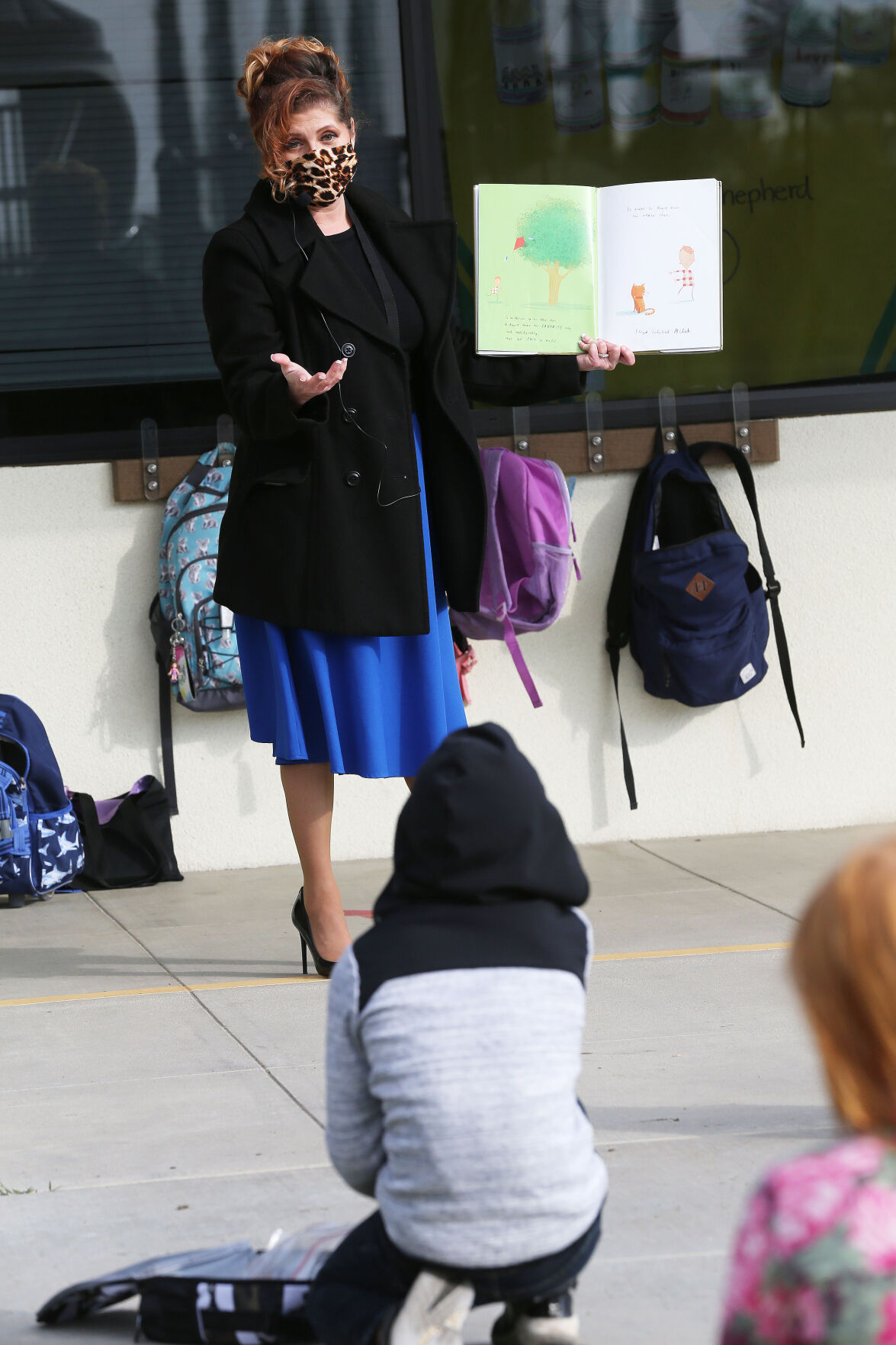 Independence Elementary School second grade teacher Morgan Greene checks on student progress during a math lesson during the morning session of her class on Thursday.

Independence Elementary sixth grade teacher Erik Kramer calls on a student during a math lesson last week at the school.

At the end of December, Gov. Gavin Newsom released his Safe Schools for All proposal to begin reopening California schools in February, starting with transitional kindergarten through second grade. His stated goal was to push in-person learning for a younger population less susceptible to COVID-19's worst effects, less likely to spread it and most in need of in-person learning.

More than a month later, the Legislature is duking out a proposal which has thrilled few. Some district administrators said the COVID-19 testing requirements, which call for weekly testing of teachers and students, are too expensive, even with the $450-per-student incentive for participating schools. State unions have called for teachers to be vaccinated or for rates to go down at least to the red tier or in some cases even the yellow tier before schools open.

In Kern County, large school districts in particular find themselves baffled by a changing set of guidelines that have done little to actually help districts open by the governor's original goal: Feb. 15.

The definition of what is an open school is key to the plan, and a point of contention. Schools that opened up to a full grade level this year are considered "open." In Newsom's initial guidance, those "open" schools that resume in-person instruction by Feb. 15 would qualify for financial incentives.

The Norris School District, which had opened in the fall, made a decision to reopen its schools Feb. 12 to maintain its "open" status, according to a recent board presentation. Transitional kindergarten, kindergarten and special day students will be back on campus in the district's hybrid AM/PM model.

But other larger districts in Kern County have felt shut out from proposed financial incentives available to schools. Starting Oct. 26, districts had just under three weeks to open up to general education students while the county was in the red tier.

Previous state guidance had emphasized a gradual phase-in and prioritizing small cohorts of vulnerable students for in-person instruction, such as special education students, English learners, and homeless and foster youths. The new guidance says these schools weren't "open" because they hadn't brought in an entire grade level.

An exchange at the Panama-Buena Vista board meeting last month captured the frustration of local districts that feel caught in the middle of new guidelines.

"It looks like the ball has been moved again," trustee Keith Wolaridge said. "Am I correct?"

"It really goes against everything that was stated about being able to bring our employees and staff back safely, and our students," she said. "We had to develop the phased-in approach to ensure the safety of our students and staff. We really believe that we did that well and well-intentioned. We were really prepared to bring back our regular students."

She said she gets a lot of questions about why the district isn't open when other smaller districts are, and she said a lot of that has to do with the scale of the district.

Russell said that if the district brought back more students but wasn't able to remain open, the district would be doing its students a disservice.

The Kern High School District used the county's brief moment in the red tier to bring back cohorts of students in its career and technical education programs, which the KHSD said were difficult to replicate in distance learning. Opening up an entire grade would include 10,000 students across the district. But career technical education cohorts neither qualify the district's schools as "open" nor would any of them be allowed to return to campus until case rates subside, under the governor's proposal.

Some of the county's schools have been hoping for a reprieve.

"We are hearing that the state may introduce some type of 'waiver,' that schools in this situation could apply for and if approved, would allow schools that did not open at least one grade level to still be considered 'open' and could then continue with their phased in plans if they wish," Meszaros wrote in an email.

The largest school district that hasn't had to change its plan drastically is Rosedale Union. The district fully opened its campuses in the fall, then closed largely due to staffing issues when case rates went up during the county surge.

This semester, students up to sixth grade have all been given the option to return to in-person learning. At middle school campuses, seventh- and eighth-grade students who struggle most with distance learning have been brought on campus, but general education students will return in March.

Rosedale Union Superintendent Sue Lemon said it's fortunate that her district was open and able to continue with its plan.

The only major difference that Newsom's proposal may create for Lemon's district is increased money for asymptomatic testing. Currently, her staff is tested every other month. Newsom proposes weekly testing in the new deep purple tier and less frequent testing as case rates lessen.

There may be a chance for elementary school districts that want to open as case rates decline. Tuesday's numbers showed Kern County's case rate was at 42 COVID-19 cases per 100,000 residents. When that number dips below 25, elementary schools are allowed to open, according to the latest guidance.

That guidance, of course, is subject to change. But some administrators are hopeful.

"There are challenges," said Jennifer Irvin, assistant superintendent of educational services at Panama-Buena Vista. "But we’re ready to get our kids back."

The state has a new centralized website. The state will be requiring school districts to report its status weekly and there will be other COVID-related information available to the public here: https://schools.covid19.ca.gov/.

All schools open for in-person instruction must have their COVID-19 Safety Plan publicly accessible on their websites, and it must be posted five days prior to students returning.

New safety requirements: All students, teachers and staff are required to wear masks. Physical distancing requirement for students is “no less than four feet.”

The county's three largest school districts can't open yet, so here are their plans

The three largest school districts in Bakersfield account for most of the students in Kern County. None of them is considered an "open” distri…