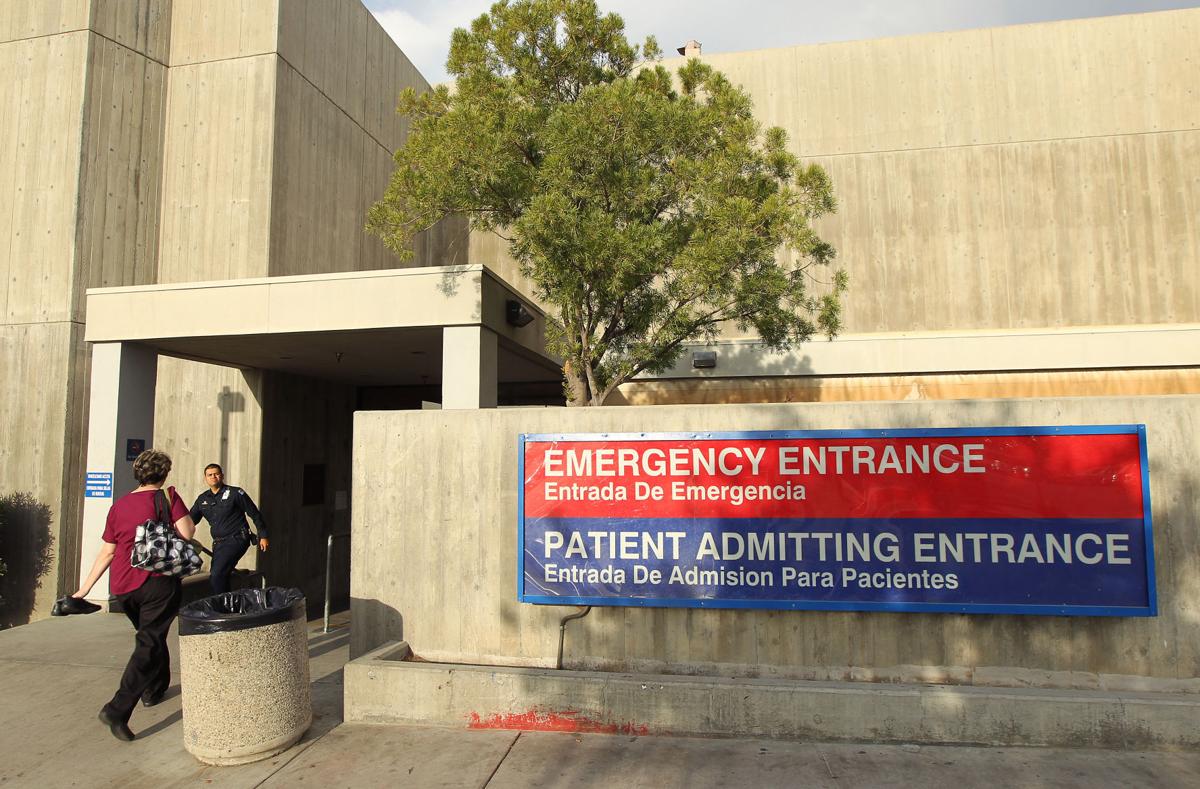 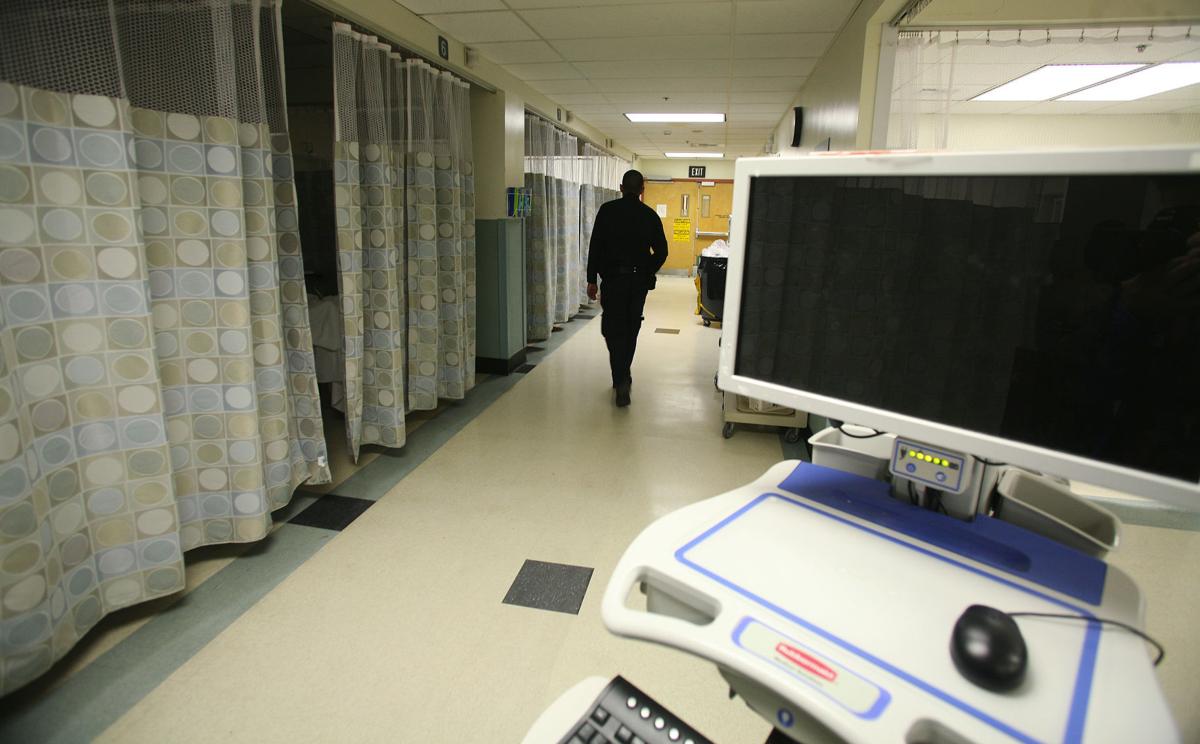 In this 2010 file photo, a security guard walks down the hallway of a full emergency room on a Friday night at Kern Medical Center.

In this 2010 file photo, a security guard walks down the hallway of a full emergency room on a Friday night at Kern Medical Center.

Emergency room visits are up 29 percent in Kern County since 2009 when the Affordable Care Act was passed, running counter to one of the key takeaways from the law: that they would decrease as consumers take advantage of preventive care.

Roughly 51 percent of Kern County ER visits between 2009 and 2016 came from patients enrolled in Medi-Cal, the state’s insurance plan for low-income individuals, according to data from the Office of Statewide Health Planning and Development analyzed by The Californian.

Medi-Cal was expanded under the ACA, meaning more people have an insurance card. But the number of primary care doctors accepting Medi-Cal hasn’t kept up with demand, especially in the Central Valley, and people are still going to ERs for basic care.

“People are using the emergency room as their primary care office. People haven’t really had private doctors, so they don’t really know how to use insurance,” said Dr. Anthony Iton, senior vice president of The California Endowment, a nonprofit foundation that focuses on health care access.

The result is an added strain on emergency departments across the region, resulting in hospital reorganizations and hiring.

And despite the ACA insuring millions, it still costs hospitals money when Medi-Cal patients walk through the door, said Jan Emerson Shea, vice president of external affairs for the California Hospitals Association.

“Now the hospitals are getting a little bit of money, but we still lose on average 40 cents on the dollar for every Medi-Cal patient we treat,” Emerson Shea said.

The ACA has eased the burden on taxpayer-funded Kern Medical Center of treating uninsured patients in the ER.

The County of Kern paid $47 million in 2009 to cover the costs of uncompensated care at KMC. Today it’s financially solvent.

When more Californians began enrolling in Medi-Cal, local hospitals started seeing a surge in emergency room visitors. It has impacted every hospital in Kern County.

“We have some come in with a small earache, or a cold, or a flu, or something that doesn’t really need to be in an emergency room,” Keller said. “They have this new benefit they didn’t have before, and no education or counseling or outreach to those patients to be able to say, ‘Here’s how you access the health care system.’ What they knew was how to get to an emergency room.”

So hospitals have taken on the task of educating patients wandering into emergency departments when they really ought to have gone to doctor’s offices, Keller said.

Bakersfield Memorial Hospital has hired “navigators” who can counsel patients on how to seek care outside the emergency room, including finding them primary care doctors who work within their insurance plans, Keller said.

The surge also is forcing hospitals to hire more doctors and staff.

“We have more physicians here now than at any point in time than we did seven years ago,” Keller said, adding the emergency department has been expanded by about one-third, funded primarily through philanthropy, but also through operating revenue. The hospital recently constructed a pediatric emergency department that has not yet opened and reorganized the way it triages patients.

Jimmy Phillips, administrative director of marketing and communications at San Joaquin Community Hospital, called the surge of patients entering emergency rooms who could have been treated by primary care doctors “a big frustration.”

Recently, the emergency department has been flooded with patients coming in for things like prescription refills, knee or back pain, cuts and scrapes, fevers and even the common cold, Phillips said.

Those patients, who could have been better served at urgent care facilities, make up roughly 70 percent of SJCH’s emergency department admittances, Phillips said, adding that because emergency rooms take patients based on severity of condition, they often face longer wait times for the same quality of care.

Scott Thygerson, the chief strategy officer at Kern Medical Center, said the increase in emergency room admittances has less to do with the Affordable Care Act and more to do with the business of health care and local expansion of emergency departments.

San Joaquin, Mercy Southwest, Mercy Downtown and Bakersfield Memorial have all added beds or expanded their departments since 2009, he said.

“It’s a big front door, and it’s the only time a patient truly has a choice where they go for care,” Thygerson said, adding that “there’s no simple answer” explaining why emergency department admittances have increased, but that the ACA is “just one small part.”

State reimbursements to doctors for taking Medi-Cal patients are simply too low for them to justify accepting those patients, leading to the surge in ER visits, said Lanhee Chen, a Republican health care strategist and research fellow at Stanford University’s Hoover Institution.

Reimbursements for primary care doctors vary depending on the procedure, but California ranks 48th for their rates nationwide.

Legislators have been working to find solutions. Locally, U.S. Reps. David Valadao, R-Hanford, and Jeff Denham, R-Turlock, have proposed HR 2779, a bill that would field-test the best Medi-Cal reimbursement strategies while incentivizing physicians to work in areas where there are high numbers of Medi-Cal enrollees, like the Central Valley.

Kern County, which has a shortage of providers, high poverty and high infant mortality, is considered to be a medically underserved area by the U.S. Department of Health and Human Services. There aren’t enough doctors to meet the need.

“Here in the valley, we know all too well that possession of an insurance card does not equate to health care services and medical treatment,” Valadao said in a statement. “By correcting California’s reimbursement method, we can encourage medical professionals to not only set up their practices in the valley, but to provide medical services to all patients, including those who rely on the Medicaid program.”

At the state level, Gov. Jerry Brown struck a budget deal with lawmakers last week that set aside $546 million in tobacco tax money for Medi-Cal provider reimbursements — roughly half the $1 billion annual estimate of what the measure would generate when voters approved Proposition 56 in 2016.

But even that isn’t enough to fix the problem, Chen said.

“With the volume of people we’re talking about with Medicaid, I’m not sure that amount of money will be sufficient to deal with the issue. It’s not about throwing money at the problem,” Chen said. “It gets back to the systemic challenges of Medicaid.

“You’ve got a program that does not have a benefit structure that incentivizes beneficiaries to stay healthy. It’s about treating them once they’re sick, and that’s not an effective way to manage a population.”

A more permanent solution, said The California Endowment’s Dr. Iton, would be to look at a statewide policy and plan to increase the number of primary care doctors in rural areas of the state where demand is growing.

He suggested the state pay a geographical premium for Medi-Cal reimbursements where there’s a dearth of doctors, and create scholarships and incentives for family practice specialties in rural areas while building residency programs that could lure young doctors to practice in the areas where they were educated.

Valley Children’s Hospital now the busiest ER in the state

Valley Children’s Hospital in Madera has become the busiest emergency department in the state and 22nd busiest nationwide, but unlike other ho…