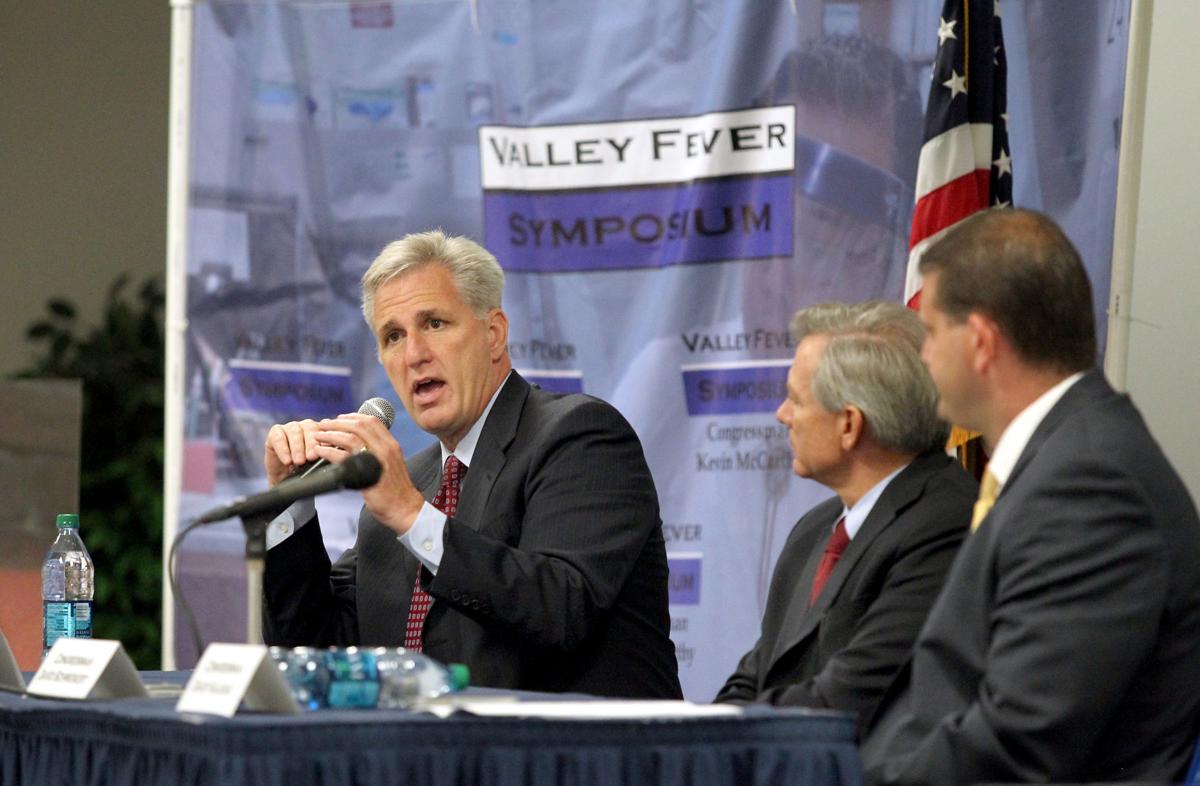 Rep. Kevin McCarthy, R-Bakersfield, leads a Congressional Valley Fever Task Force, which includes Rep. David Schweikert, R-Arizona, center, and Rep. David Valadao, R-Hanford, from California during a question-and-answer period at the Valley Fever Symposium held at Cal State Bakersfield in September 2013. The symposium sparked multiple efforts to combat valley fever, but a robust public awareness campaign was not one of them. 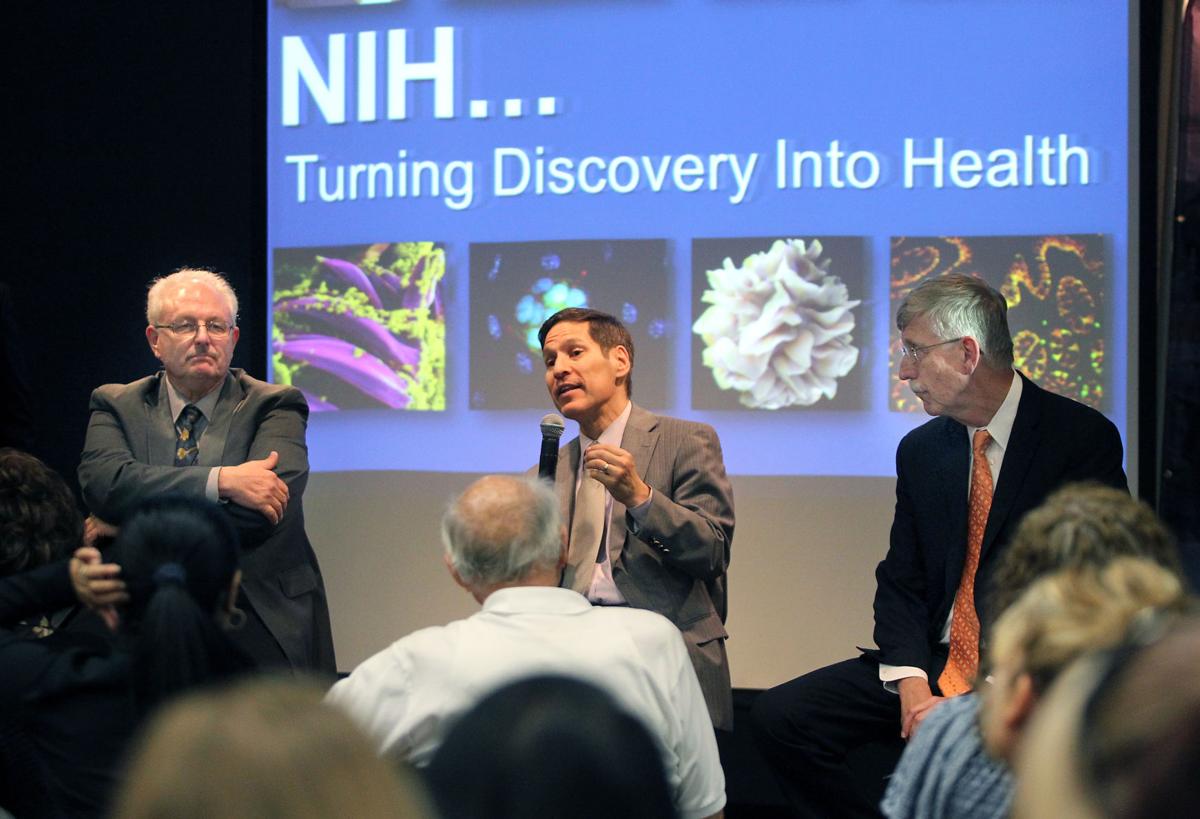 Dr. Tom Frieden, center, director for the Centers for Disease Control and Prevention, answers questions from valley fever patients during a community forum at the Valley Fever Symposium held in Bakersfield at the Kern County Department of Public Health Services in September 2013. At left is Dr. Royce Johnson, professor of medicine at UCLA and Kern Medical Center's chief of infectious disease. At right is Dr. Francis Collins, director of the National Institutes of Health. The symposium sparked multiple efforts to combat valley fever, but a robust public awareness campaign was not one of them

Rep. Kevin McCarthy, R-Bakersfield, leads a Congressional Valley Fever Task Force, which includes Rep. David Schweikert, R-Arizona, center, and Rep. David Valadao, R-Hanford, from California during a question-and-answer period at the Valley Fever Symposium held at Cal State Bakersfield in September 2013. The symposium sparked multiple efforts to combat valley fever, but a robust public awareness campaign was not one of them.

Dr. Tom Frieden, center, director for the Centers for Disease Control and Prevention, answers questions from valley fever patients during a community forum at the Valley Fever Symposium held in Bakersfield at the Kern County Department of Public Health Services in September 2013. At left is Dr. Royce Johnson, professor of medicine at UCLA and Kern Medical Center's chief of infectious disease. At right is Dr. Francis Collins, director of the National Institutes of Health. The symposium sparked multiple efforts to combat valley fever, but a robust public awareness campaign was not one of them

Valley fever infects more than 13,000 people annually in Arizona and California and kills more than 100. Yet the two states spend less on public awareness about the disease in one year than what the Bakersfield City School District spends on lunch milk for a month and less than what Pima County, Arizona's Parks and Recreation Department spent on janitorial supplies in 2016.

Government-funded awareness campaigns can transform public behavior and lead to different approaches by doctors and nurses. When it comes to valley fever, though, state and local agencies in both locales have historically struggled with support for one of the most important aspects of combatting the disease: warning the public of its existence.

Since the beginning of 2011, valley fever — which is caused by breathing in coccidioidal fungal spores that get swept into the air — has infected more than 75,000 people in California and Arizona, the two regions with the highest number of cases. California experienced a valley fever epidemic last year and a wet winter signals that 2017 could be worse.

California also has not provided valley fever awareness funding to county public health agencies in at least three decades. Arizona, the other state where valley fever is widespread, hasn’t done much better.

“It is a disease that is not respected and not funded,” said Pat White, who founded Arizona Victims of Valley Fever in Sun City West near Phoenix more than a decade ago. “People come here for a convention, they go home, get sick and they don’t know why.”

New research focus but no funds for awareness

Under former Arizona Gov. Janet Napolitano, the state’s valley fever program received $300,000 in state money in 2007. The money went into a valley fever education video, an enhanced surveillance project and the research into the disease at the University of Arizona’s Valley Fever Center for Excellence.

The enhanced surveillance included a comprehensive study of every tenth case of valley fever reported to the state. It identified personal and economic costs of the disease as well as trends in the duration and severity of illness and diagnosis delays. It remains the largest population-based assessment of the effects of valley fever.

But with the onset of the recession, state valley fever funding disappeared in 2008 and 2009. The Arizona Department of Health Services has relied on grants for its valley fever activities since 2010 and currently operates on a $96,868 CDC grant for surveillance and education. Since losing its state money, the program’s budget has never exceeded $100,000 per year.

“The recession came and we lost almost every single line item in the agency, including valley fever,” said Will Humble, executive director of the Arizona Public Health Association. “It was great while it lasted.”

The situation looked ripe for change after the first national symposium on valley fever. House Majority Leader Kevin McCarthy, R-Bakersfield, hosted the event in 2013, shortly after a year-long reporting project on valley fever by the Center for Health Journalism Collaborative, called “Just One Breath,” put the issue on the map. The symposium brought together leading physicians, politicians and public health officials from across the country, including the directors of the National Institutes of Health and the Centers for Disease Control and Prevention. And it promised to finally bring needed resources and attention to the disease.

“Everything in public health is a competing priority,” said Kirt Emery, a recently retired Kern County epidemiologist who has spent much of his career focused on valley fever. “I've seen great changes since that symposium at the national level.”

McCarthy’s symposium was integral in securing $5 million for a clinical trial that launched last fall of fluconazole, a drug that has been used to treat valley fever off-label for years. The CDC also began investigating cocci cases far from traditionally endemic regions after the symposium.

The University of Arizona also recently secured a $2.27 million, four-year federal grant from the National Institutes of Health to build a genetic profile of the people who get extremely ill from valley fever.

McCarthy’s symposium also resulted in the creation of the Congressional Valley Fever Task Force, aimed at improving awareness, reducing the risk of misdiagnoses and finding a viable cure.

Yet those positive results on a federal level haven’t translated into greater attention or resources when it comes to public health information for communities.

Awareness efforts in California tend to come in concentrated bursts only when counties launch their own separate campaigns. There has been no broad valley fever public awareness campaign with highway billboards or posters in stores, as there have been for drunk driving or the annual flu vaccine. No public service announcements run on television or radio, nor are they printed in newspapers.

Instead, most valley fever campaigns rely on that mainstay of low-budget outreach: the pamphlet.

California Public Health Department officials acknowledge the lack of funding, but say they have done their part by making available fact sheets, posters, brochures and educational materials on the agency website and sharing materials on social media and in professional newsletters.

But those sometimes obscure publications are likely not seen by people who are most vulnerable to the disease – those who work outdoors, especially in construction, farm labor and other jobs that bring them into contact with dirt and dust.

To address these risks, the state says it has worked with CalFIRE to educate wildland firefighters on the dangers of cocci while battling blazes in endemic regions and consulted with the California High-Speed Rail Authority on best practices for construction of the multi-billion dollar bullet train that will cut through high-risk areas.

This year, the Kern County Department of Public Health Services also worked with state public health officials in Arizona to design a billboard that would keep the message consistent between the two states.

Kern County Public Health officials, responding to a 62 percent surge in cases and six deaths in 2016, lit up digital signs at five high-traffic locations around the county in April.

Kern County received almost $27,000 in state funds this year to raise awareness of Zika virus, $36,000 to combat tobacco use and more than $46,000 to stymie a rising STD epidemic across the region.

The state of Arizona, which once had special annual funding for awareness and surveillance efforts, hasn’t set aside any of its own public health funds for valley fever since 2007. Instead, all of the state’s surveillance and education efforts are funded through the federal Centers for Disease Control and Prevention.

Researchers and public health officials say Arizona could do much more. For instance, no coordinated effort exists to warn tourists and new residents about valley fever, responsible for 54 deaths last year in Arizona. Arizona has settled for a low-cost awareness effort, putting several public service announcements on its website. They include several posters with the same message: “Cough? Fever? Exhausted? Ask your doctor to test you for valley fever.”

“That’s way too passive,” said Madalene Milano, a partner at GMMB, an international communications firm behind the successful “Click it or Ticket” campaign to increase seatbelt use. “The sad thing is, a lot of times people will do a brochure or poster, or do a very static campaign, and that’s not how people live their lives now.”

Without special state funds, counties that are hardest hit have done their best to fill in the gap.

In Arizona, more than 50 libraries in Maricopa, Pima and Pinal counties have distributed valley fever educational brochures in English and Spanish. And public service video announcements ran for 27 days in Phoenix and Tucson area Harkins Theatres in 2014.

Such efforts are worthwhile, though they work better when they are sustained, said Dr. John Galgiani, director of the University of Arizona’s valley fever center. With more funding, public health officials could increase outreach efforts to doctors, pay for regular public service announcements on radio and television and put up billboards along major highways, he said.

In California, Monterey County health officials, noticing an uptick in cases last September, designed an awareness mailer and sent it to 9,300 households in California’s Salinas Valley. Those households are close to a large solar panel project that health officials anticipate will disturb soil that likely has the cocci fungus growing in it. In English and Spanish, the mailers included a definition of valley fever, symptoms and links to resources.

The effort cost roughly $4,000, but the money didn’t come from a special grant, said Kristy Michie, an epidemiologist at the Monterey County Health Department. Instead, the department scrimped and used money from a staff vacancy to pay for the effort.

McCarthy said that resources would be best spent in creating online awareness efforts.

“The greatest place we can go is social media,” McCarthy said.

But online efforts have languished. It wasn’t until this month that the Congressional Valley Fever Task Force, which McCarthy founded in 2013, launched a website. Its Twitter page, which started in September 2016, has just 19 followers and 16 tweets. Its Facebook page has 19 followers and about 15 “likes.” Both have fewer than 30 posts in two years.

“There hasn’t been funding for a concerted awareness campaign, but we still make these baby steps,” said Claudia Jonah, the health officer at the Kern County Department of Public Health Services.

The collaborative is an initiative of the Center for Health Journalism at the University of Southern California’s Annenberg School for Communication and Journalism.

You can read more of this series and the collaborative's previous work here:

If you’re curious about whether you’ve ever contracted valley fever, but never been tested, now you’ve got no excuse.