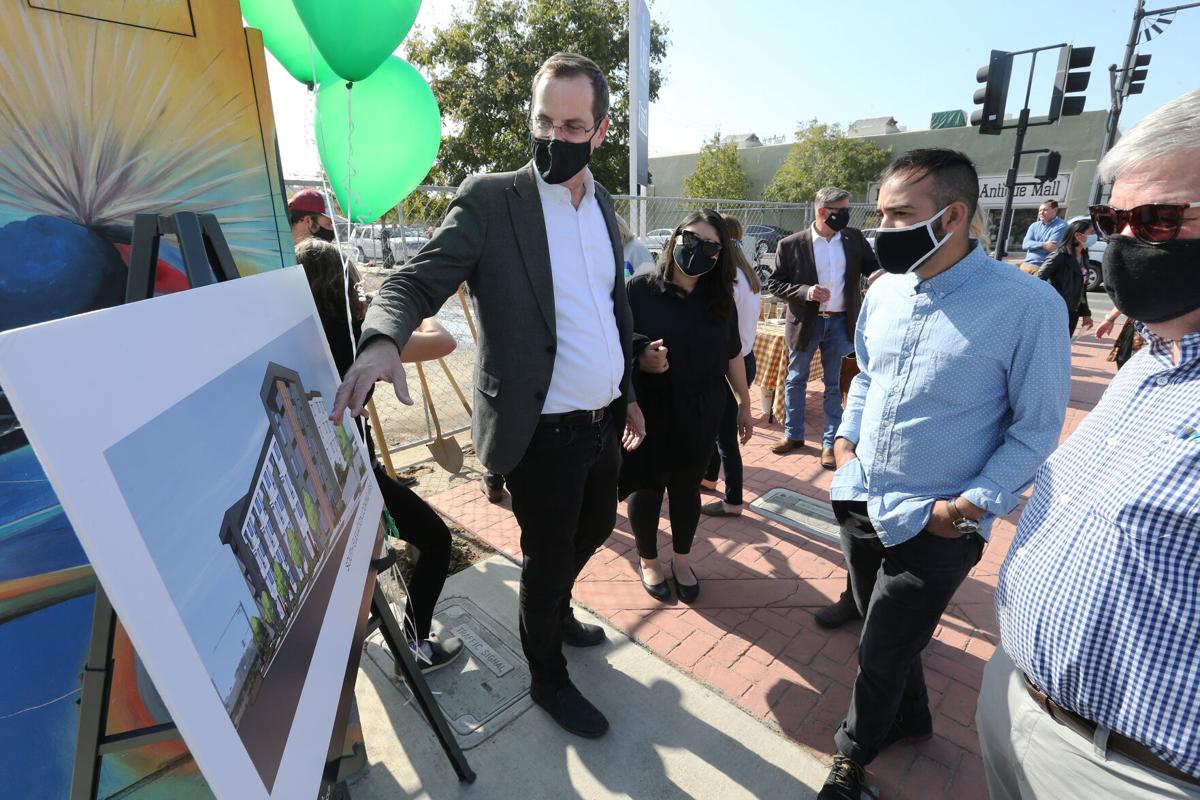 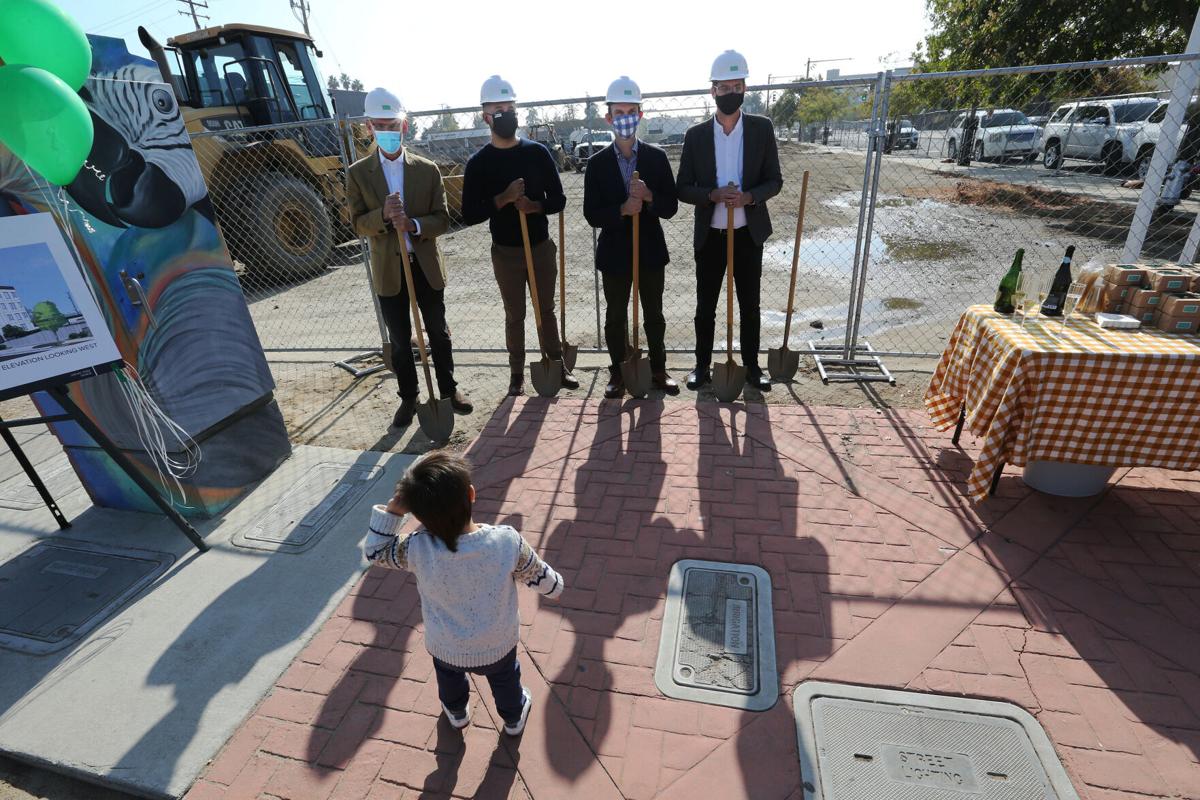 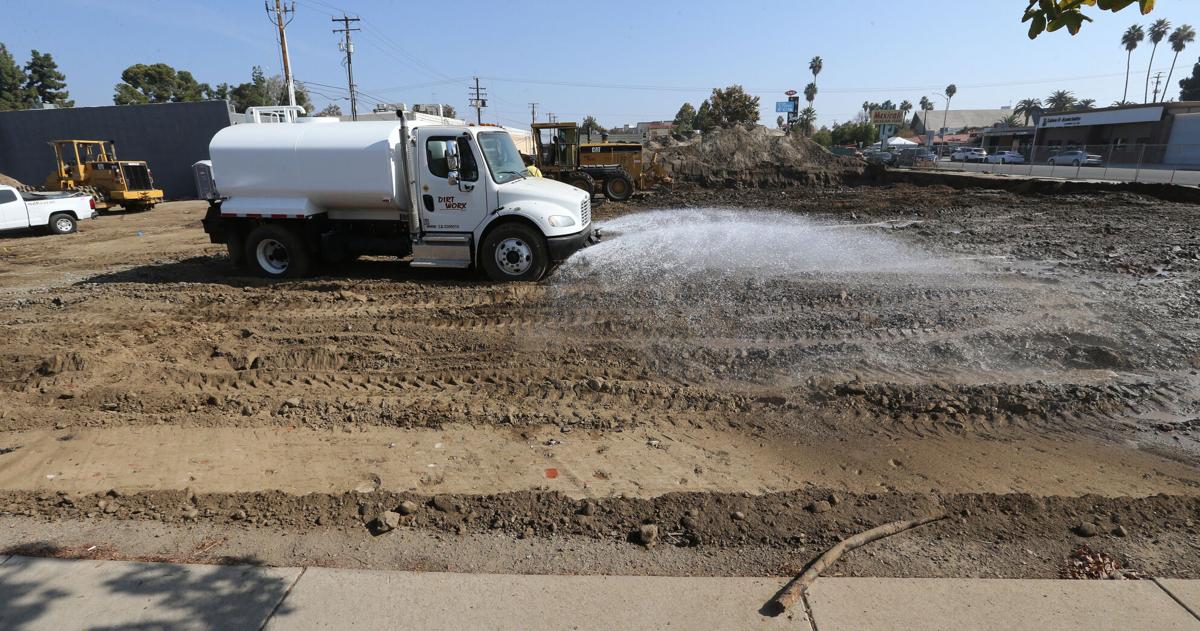 Dirt Worx was excavating Friday on property at Q and 18th streets, where work has begun on the The Cue Eastchester Flats. Thirty investors have pooled $4 million to proceed with the market-rate rental project despite tough times in downtown Bakersfield. 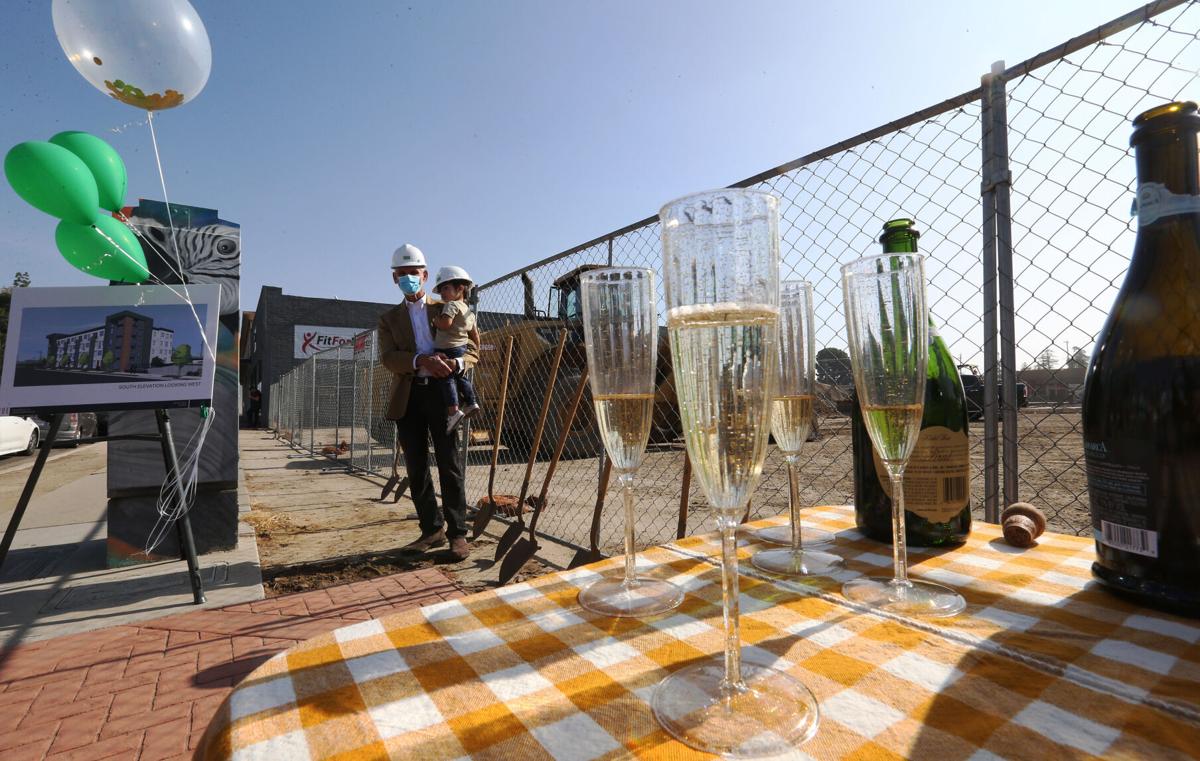 After a ceremonial toast and groundbreaking, developer Bob Smith, also a Bakersfield city councilman, poses for photographs with his 2-year-old grandson Mason Bitton. Thirty investors have pooled $4 million to proceed with the market-rate rental project despite tough times in downtown Bakersfield.

Dirt Worx was excavating Friday on property at Q and 18th streets, where work has begun on the The Cue Eastchester Flats. Thirty investors have pooled $4 million to proceed with the market-rate rental project despite tough times in downtown Bakersfield.

After a ceremonial toast and groundbreaking, developer Bob Smith, also a Bakersfield city councilman, poses for photographs with his 2-year-old grandson Mason Bitton. Thirty investors have pooled $4 million to proceed with the market-rate rental project despite tough times in downtown Bakersfield.

Hopes for good luck are implied whenever Champagne flutes are raised to the heavens. But the symbolism seemed more confident than wishful when two dozen people did it Friday morning at 19th and Q streets.

Investors among them say they're fully aware of the risks being taken by building market-rate housing in a part of town struggling with crime and homelessness. And they saw for themselves how much the pandemic has thinned the foot traffic nearby shop owners and restaurateurs depend on.

Their decision to proceed nonetheless is informed by many positive indicators: national market trends, local occupancy rates and demographic data. These together with the project developer's recent experience in the same neighborhood have given the project's investors the courage to do what no housing developer since the last century has dared in downtown Bakersfield.

Thirty investors have pooled $4 million, said Austin Smith, owner-broker at Sage Equities, developer of what's being called The Cue Eastchester Flats. That sum combined with a bank loan of an undisclosed amount is expected to fund the construction of 53 market-rate, mostly single-floor apartments smaller and less expensive than a fully leased sister project two blocks away.

Investor John-Paul “J.P.” Lake said he feels good about The Cue for several reasons, starting with national housing-occupancy and rent-collection numbers he sees as a positive sign people are keeping up with their rent despite the pandemic's economic strains. Local landlords have reported strong collection rates as well.

Lake takes encouragement, too, from the quality and modern appeal he sees in Sage's existing rental project, the 44-unit 17th Place Townhomes. With high ceilings, large windows and distinctive textures and materials, both are the work of Bakersfield architect Daniel Cater of Cater Design Group.

"I think it goes to show," Lake said, "when you have a quality product, the risk is really mitigated."

The project's lender representative made a case for The Cue point by point.

Eastchester, the neighborhood where the project it sited, is at the "cutting edge" of downtown Bakersfield's resurgence, Scott A. Begin, senior vice president and manager of Citizens Business Bank's Bakersfield Downtown Business Financial Center, said by email.

The vacancy rate for multifamily rentals in Bakersfield has fallen below 2 percent, he noted, and landlords report waiting lists are getting longer.

Plus, new shops and restaurants are opening around Eastchester, not to mention existing venues, government offices and other urban amenities.

"Historically," Begin wrote, "the downtown area has been challenged but there is still a very strong core of business activity here." He added that Sage, with its previous project a success, has "earned the confidence of the bank when it comes to completing and managing this project."

He touched as well on another impact aspect: who will live at The Cue. Begin suggested some will be medical workers employed by nearby hospitals.

Lake said it's likely the tenants as a whole will skew toward people relocating from the coast — younger people, for the most part, who prefer a downtown lifestyle to suburbia.

In an email, investor Sheryl Barbich acknowledged downtown has been hit hard by the pandemic, but she expressed hope a vaccine will be introduced soon and business will pick up by spring.

She foresees young people being attracted to the project and its walkable neighborhood, not only people priced out of coastal markets but people originally from Bakersfield who want to come home.

"Much of this may be attributable to our relative affordable housing, but I believe it is also attributable to young families returning home, and/or being attracted to a place where they can afford to live," Barbich wrote.

Downtown areas need market-rate housing as part of any lasting revival, he said, and it's up to local government to help create the right conditions for that kind of investment.

Financial incentives and reduced fees are part of what the government can do to promote new market-rate housing development in the area, Gonzales said. But he noted none of it was necessary in Sage's case.

"This is really their (Sage's) initiative," he said, "and I applaud them for it."