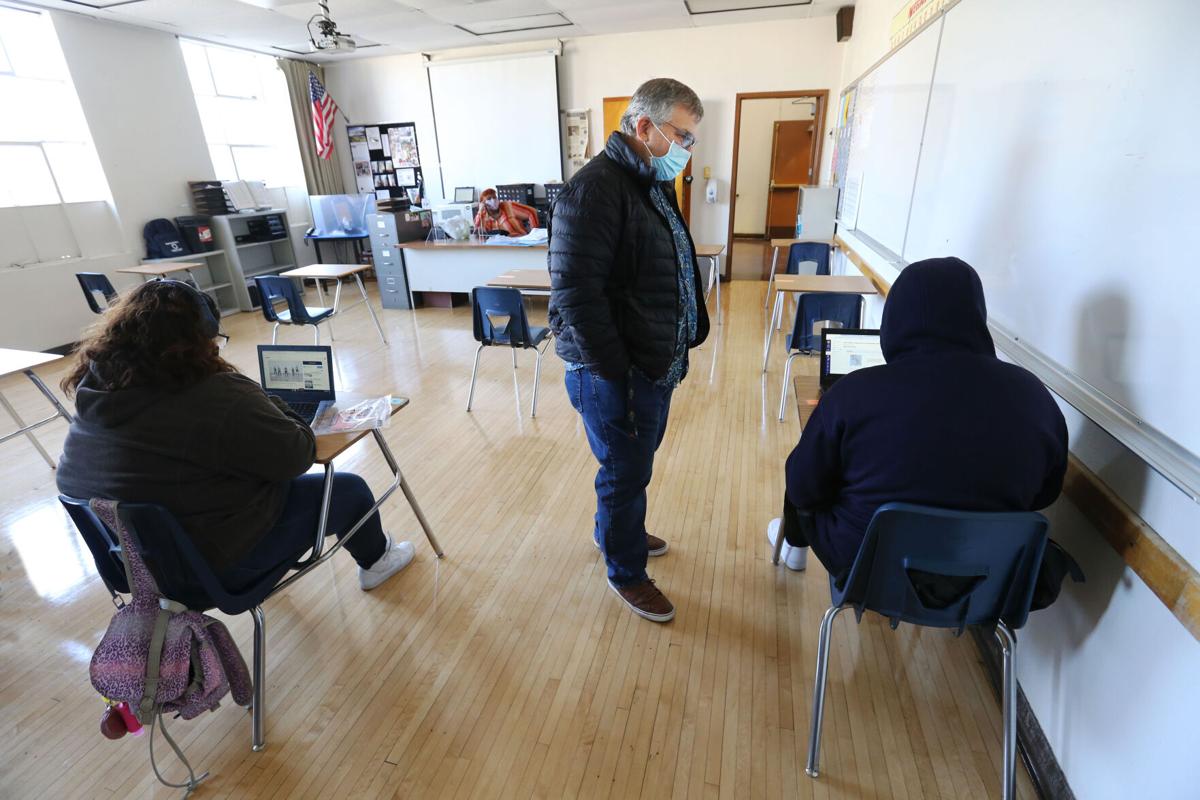 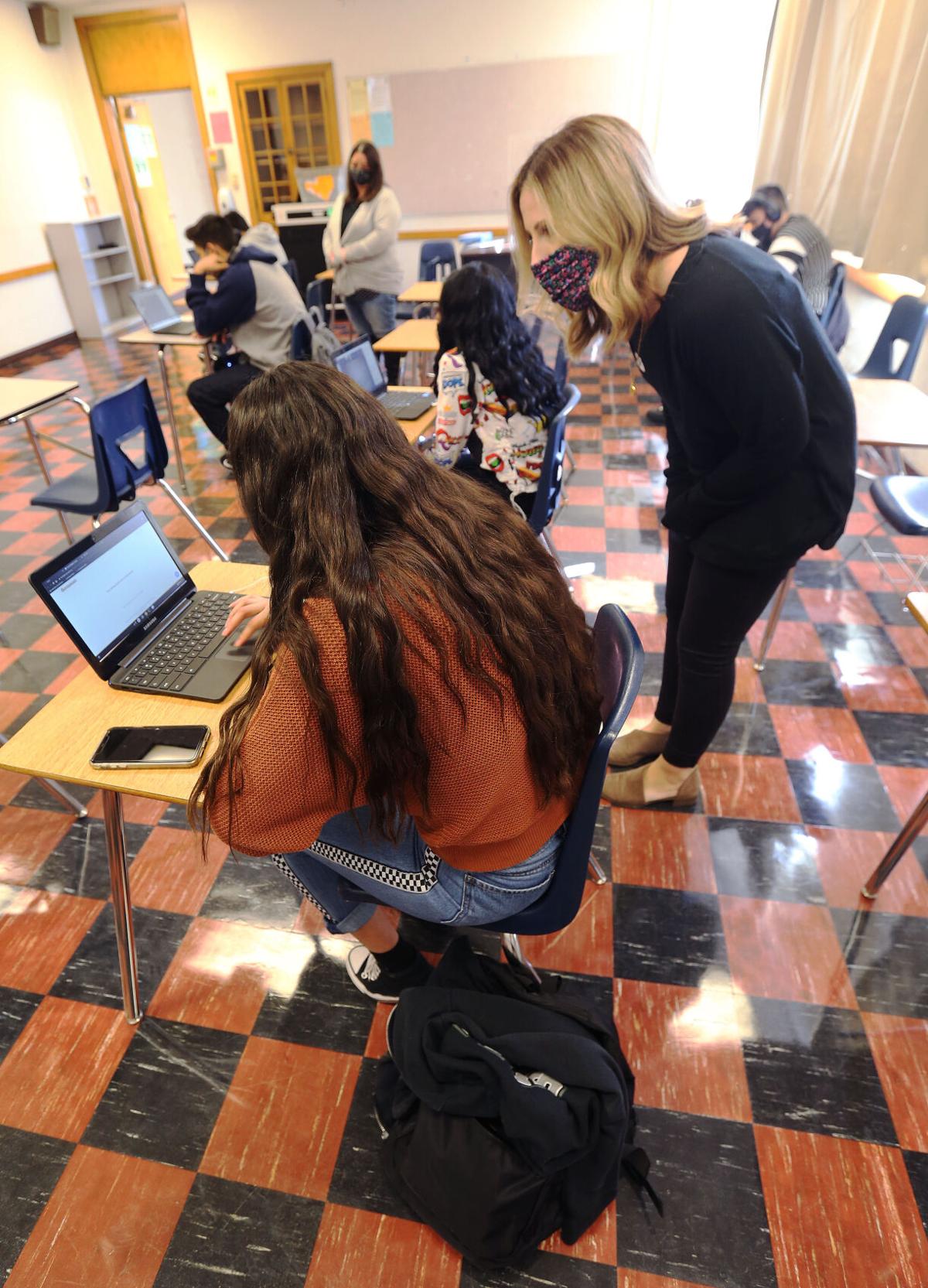 Monday marked the beginning of a new wave of as many as 3,000 students returning to the Kern High School District. It was a quiet but notable occasion at most schools.

Bakersfield High School special education teacher Steve Kliewer said that when his class of juniors arrived, they stood at the classroom window overlooking the campus' Elm Grove, just marveling at being back and reminiscing about what it was like last year.

"They were eager to come back," he said.

The few classes that are back appeared to be mellow affairs. Kliewer teaches a group of special education students in what is being called a distance learning lab. Instead of teaching a lesson, his students are doing distance learning with other teachers on their Chromebooks with their headphones — just as they were at home — but in a classroom. On Monday, there were five students sitting at spaced-out desks while Kliewer roamed the room checking in with the students.

The Kern High School District has selected these students to return under what they have called Phase 2 of their small cohort plan. Other students returning under this phase include English learners and homeless and foster youth.

Some of the other schools that began to welcome back small cohorts on Monday included Golden Valley, Highland, Independence, Kern Valley, Mira Monte, North and West high schools. Which students come back varies greatly depending on the needs of the campus, Briscoe explained. Some may be prioritizing English learners or homeless and foster youth before bringing back other groups.

BHS is bringing back cohorts of all of these students this week, according to principal Ben Sherley. The school already had groups of moderate/severe special education students on campus who returned in Phase 1 two weeks ago. This week Shirley expects to have about 80 students altogether.

"It’s been nice to structure a plan that fits our students," Sherley said.

BHS special education teacher Jessica Hogg said bringing these students on campus has a lot of benefits, even if it isn't the traditional in-person learning experience.

For some students, just being in a classroom with a reliable internet connection and free of distractions is a big plus. So is having a teacher on hand to offer immediate help. Counselors, social workers and speech pathologists are on campus to offer services, too. The students who come to school are also offered breakfast, lunch and dinner before they head home.

Hogg's class on Monday had five freshmen. For many of them it was their first day on campus, and they needed help just finding their classroom. She said it was nice to finally make a human connection with some students she had only ever met remotely.

"It's nice to see him and say this is my student," Hogg said.

Another group of students who arrived Monday were students in career technical education, arriving under what the district calls Phase 3, which also began Monday. Unlike students in the distance learning lab, they will be doing hands-on learning with instructors.

However, many students who said they would be interested in returning to campus didn't return. The district's two career technical campuses were supposed to see about 100 students each, but their numbers weren't that high on Monday, Briscoe said.

The same was true at BHS. Both Kliewer and Hogg had rosters that were about double the number of students who actually showed up. Some families might have changed their mind about how safe they felt. Hogg said she expects to see some more students as they get used to the schedule, which has students coming on campus on alternating days. Kliewer anticipates more as word of mouth spreads about what is happening on campus.

In a handful of cases, students arrived on campus and decided they weren't happy with what the new campus experience looked like, Sherley said. Kliewer said one student in his class arrived and was disappointed to see that students would still be receiving distance learning, just on campus. He left.

About 200 students in moderate/severe special education have been on campuses across the district for about two weeks. Sherley said staff members from those cohorts at BHS have had positive experiences to share so far, which is encouraging for the next phase of staff members.

"They've all said students were excited to be there," he said.

Bringing students onto campus in the age of COVID-19 is a much more intensive practice. Each arriving student has their temperature taken and stays with their cohort from 8 a.m. to 1 p.m. Even something as simple as a student using the restroom requires an escort to make sure a student isn't interacting with any other students. But he said the small numbers made it possible for Monday to go smoothly.

"When you hear things are working smoothly and students are enjoying being there, it’s been a positive rollout," he said.