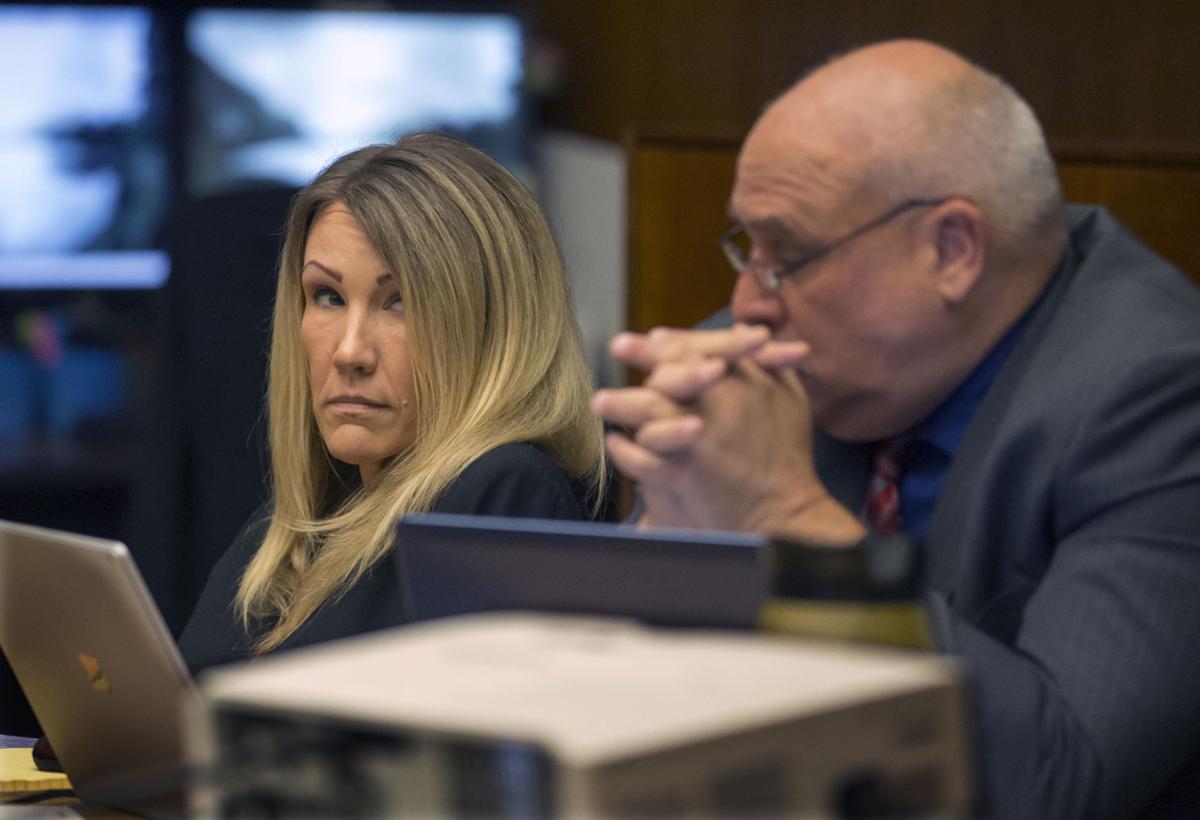 Sabrina Limon with her attorney, Richard Terry, during opening statements in her murder trial. Limon is charged with murder in the shooting of her husband, Robert Limon. 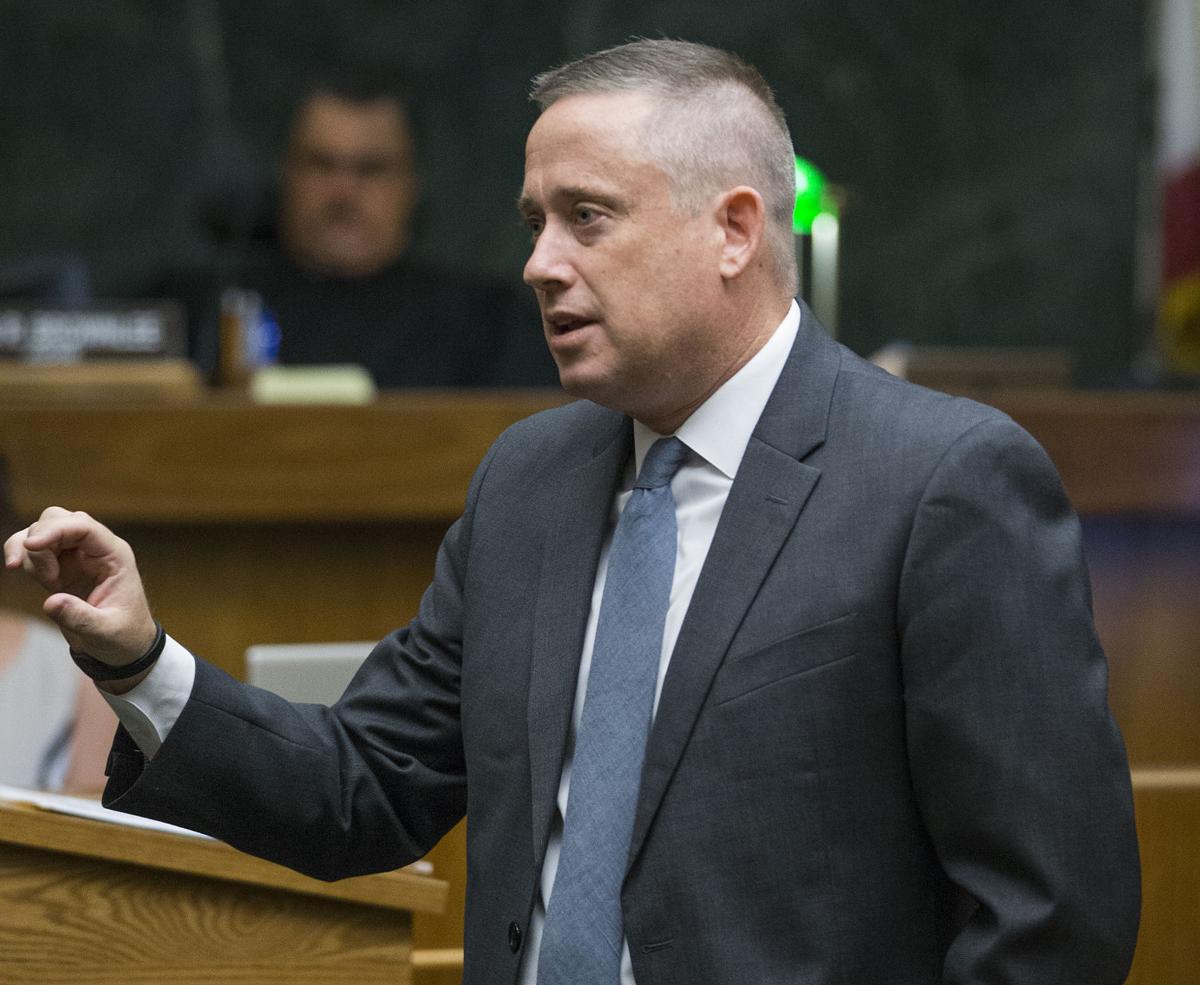 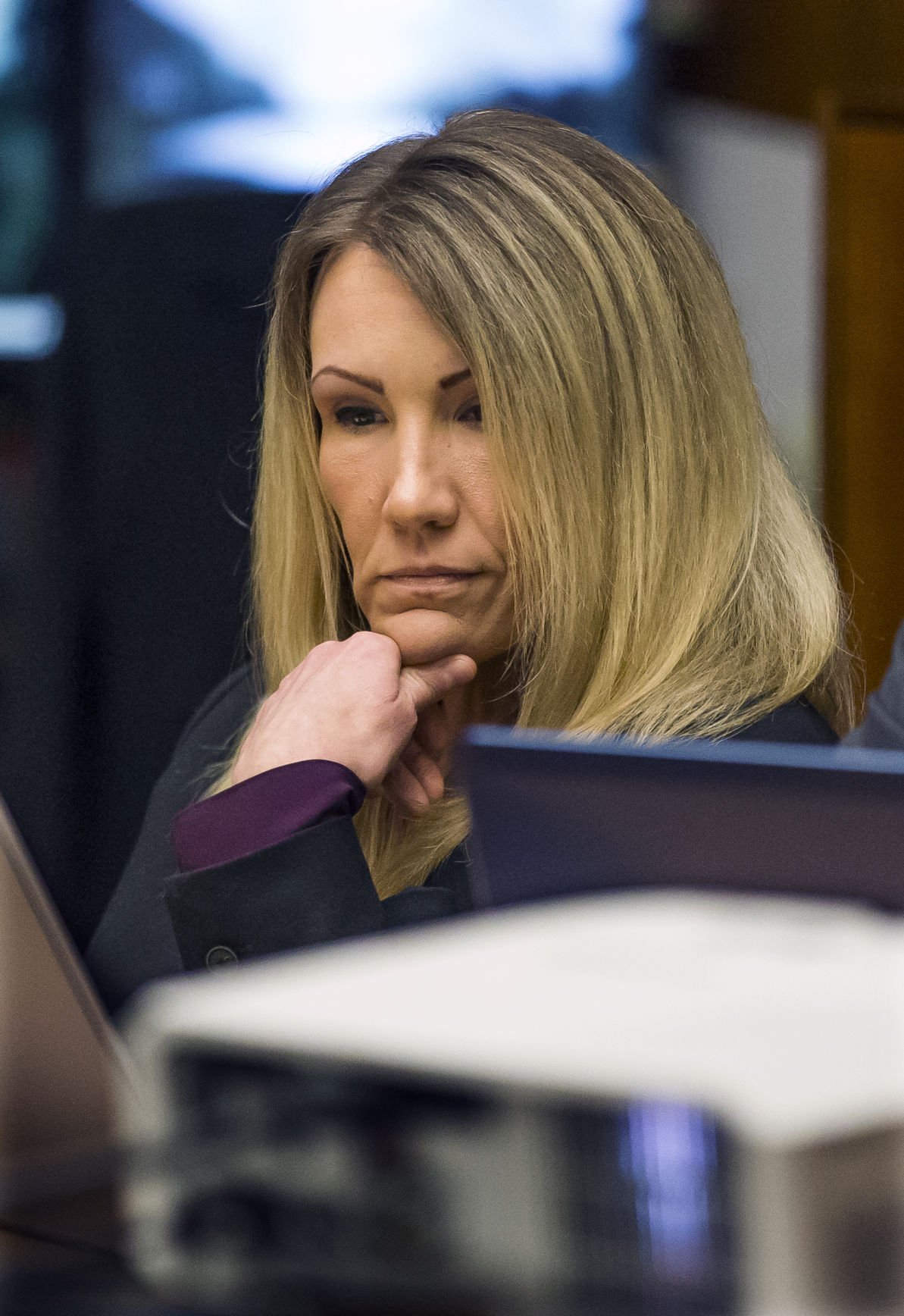 Defendant Sabrina Limon listens as prosecutor Eric Smith makes opening statements on the first day of her trial in the shooting death of her husband, Robert Limon. 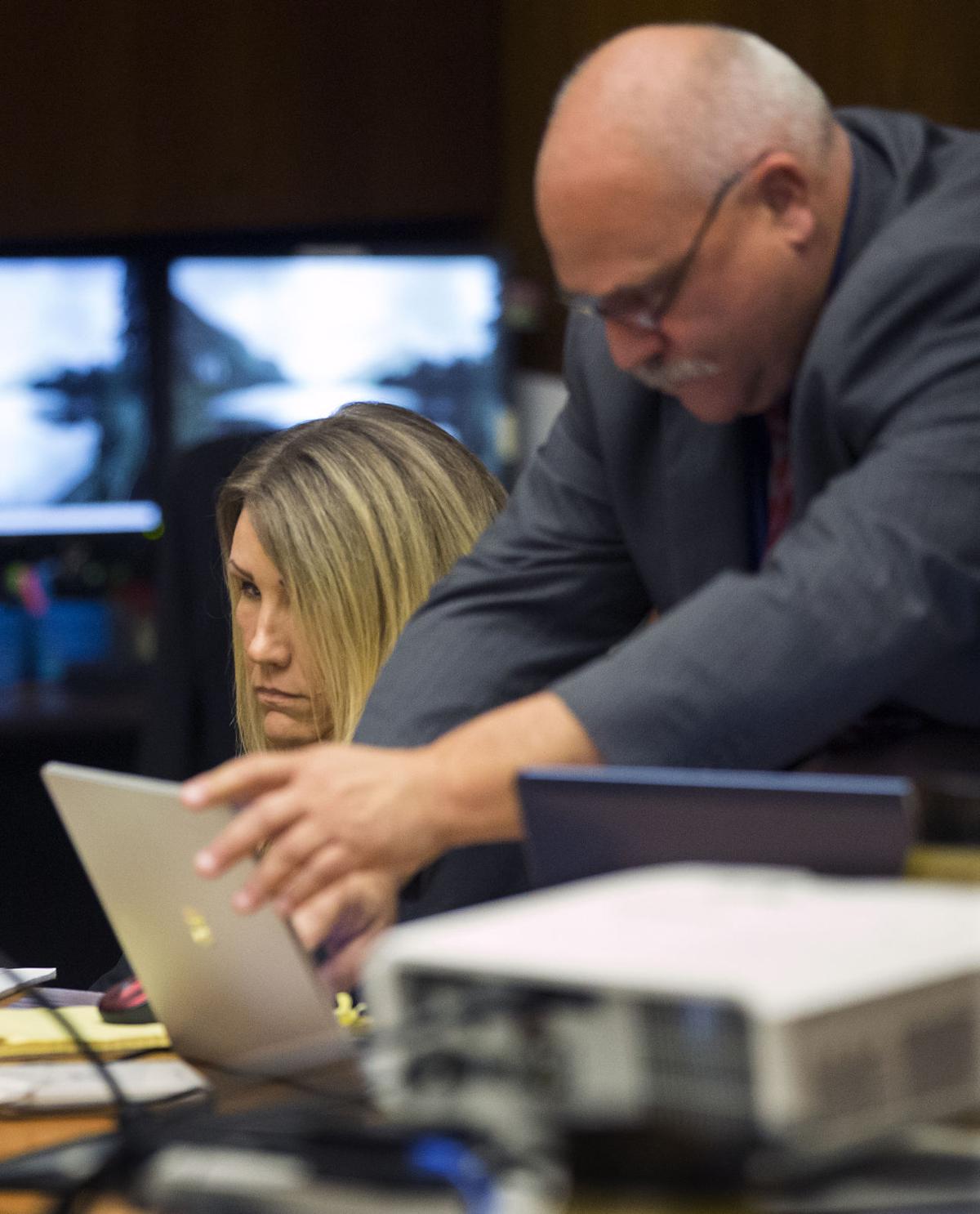 Sabrina Limon with her attorney, Richard Terry, during opening statements in Kern County Superior Court. Limon is charged with murder in the shooting of her husband, Robert Limon.

Sabrina Limon with her attorney, Richard Terry, during opening statements in her murder trial. Limon is charged with murder in the shooting of her husband, Robert Limon.

Defendant Sabrina Limon listens as prosecutor Eric Smith makes opening statements on the first day of her trial in the shooting death of her husband, Robert Limon.

Sabrina Limon with her attorney, Richard Terry, during opening statements in Kern County Superior Court. Limon is charged with murder in the shooting of her husband, Robert Limon.

In the days after her husband was gunned down, Sabrina Limon sent "countless" text messages to Redlands firefighter Jonathan Hearn, according to prosecutors.

In them, she didn't lament her husband's death, nor question who could have killed him. She already knew the answer, according to prosecutors.

Instead, she repeatedly professed her love to Hearn and how she had never known such happiness.

"I adore you Jonathan Hearn, you sexy guy," read one of the emails.

Sabrina Limon, prosecutor Eric Smith told jurors Monday on the first day of what is expected to be a month-long trial, wasn't stunned by her husband's death because, with Hearn, she had long plotted it. She wanted Hearn, whom she had carried on an affair with for years, to replace her husband so her children could be brought up by "godly parents."

The evidence will show Limon's husband was also killed for money, Smith said.

Sabrina Limon stood to receive $300,000 in life insurance, plus lifelong benefits from her husband's employer, Burlington Northern Santa Fe Railway, since he was killed while on the job.

Defense attorney Richard Terry did not dispute Limon and Hearn were in a relationship.

He denied, however, that she knew anything about Hearn's plans to kill her husband.

The only evidence the prosecution has of her involvement is the word of Hearn, "an admitted cold-blooded, calculating killer," Terry said.

Charged with murder and attempted murder, among other things, Limon, 37, faces life in prison if convicted of her husband's Aug. 17, 2014, killing. Hearn has agreed to testify at her trial in exchange for a prison term of 25 years and four months.

Hearn has been in custody since 2014. Sabrina Limon was originally arrested with him, but released due to insufficient evidence. She was rearrested in January after Hearn agreed to testify.

The trial has attracted national media attention, including from "Dateline NBC," which is filming the proceedings.

Sabrina Limon sat slightly slumped over in her chair, facing away from the audience, during the trial Monday. She looked toward Terry several times but otherwise appeared to show no reaction to testimony.

During his opening statement, Smith referred to a letter Sabrina Limon wrote Hearn months before her husband's death that showed she and Hearn planned to spend their lives together.

"But all that the years bring to us, I never want to forget you were made for me and I was made for you," she wrote.

Also in the letter, she wrote, "I love you for the hopes and faith of our future together."

Smith described how the two had originally planned to kill Limon's husband by putting arsenic trioxide into banana pudding and sending it with him to work.

They went as far as poisoning the pudding and Limon put it in her husband's lunch, he said, but aborted the plan over fears of getting caught because they had texted and called each other so often. Court documents say Limon called her husband and told him to throw out the pudding because it had gone bad.

Smith said Hearn then bought a "burner" phone to use for contacting Limon. The two then came up with the plan to kill her husband the next time he was called in to relieve a co-worker at a remote BNSF building in Tehachapi.

After Limon provided him with directions and her husband's work schedule, Hearn drove to the building and found her husband alone, Smith said. He shot him twice with a .45-caliber handgun fitted with a homemade silencer.

Hearn drove home and contacted Limon, both by text and phone call, to let her know her husband was dead, Smith said.

In his opening statement, Terry noted some have referred to the Limon case as a "love triangle."

"It's not a love triangle," Terry said. "I would call it more of a love polygon."

He said Limon and her husband, Robert Limon, lived in Helendale and were involved in a swingers group where they engaged in sex with other couples. They'd been living that kind of lifestyle for years.

When Sabrina Limon met Hearn in 2012 while handing out samples at Costco, Terry said, she was flattered by the attentions of a younger man who made her feel important, "not just some sex toy that her husband kind of passed around."

Hearn, described as highly intelligent, manipulated Limon while at the same time fulfilling some need in her, Terry said. He carried out the killing alone and afterward took advantage of her, according to the attorney.

"She was vulnerable," Terry said. "She felt loved. She felt she needed someone to lean on, and he was there to fill that role."

The first deputies to respond to the scene of the shooting testified Monday, as did investigators who gathered evidence and several of Robert Limon's co-workers, including Shaun Ware, who discovered his body.

Ware testified he found Robert Limon on his back in a BNSF garage with part of his head and shoulders lying against the front driver's-side tire, a pool of blood beneath him. He repeatedly tried to get a response from Robert Limon, and when he didn't he called 911.

Deputies arrived to find Ware on his knees outside the garage, shaking slightly and obviously upset by what he'd seen.

Ware, and the other co-workers, described Robert Limon as a happy, hard-working individual. No one could think of anyone who would want to harm him.

The last witness called Monday was Detective Robert Meyer, the lead investigator in the case who interviewed Sabrina Limon multiple times before her arrest. Audio from two of those interviews were played in court.

In the first, recorded two days after her husband's death, Sabrina Limon sounds as if she's been crying, her voice trembling as Meyer asks about her husband and his work.

She says she spoke to her husband a couple times the day of his death, and he'd told her he was working on a train and was so busy he had to get his lunch to go. She tells Meyer she tried calling him later that day, but got no response.

As it got later, she says she grew increasingly worried and called and texted him but didn't hear back.

Meyer asks if Robert Limon had any enemies.

"Never," she says. "Everybody loved Robert. Loved him."

In the second interview, held five days after the killing, Sabrina Limon's voice is steady. She asks if the detectives know what happened, and if it was a robbery why her husband's wallet wasn't stolen.

Meyer says they're in the preliminary stages of the investigation. But then he asks a question that she seems to hesitate over slightly in answering.

The detective says Robert Limon's cellphone has pictures of naked women on it. Some of the photos appear to be of her, some of other women.

He asks if either she or her husband were in relationships with other people, and did they have an open relationship.

"We just had fun together, you know," she says.

Also expected to be called Tuesday is Kelly Bernatene, a friend of Robert Limon's who was assaulted outside the courtroom by Karen Lynn Hudgins following a January hearing.

Judge John R. Brownlee asked Hudgins, who was in the courtroom Monday, to skip Bernatene's testimony, which will likely be over by noon. Hudgins agreed.

Hudgins pleaded no contest to a count of misdemeanor battery in April.