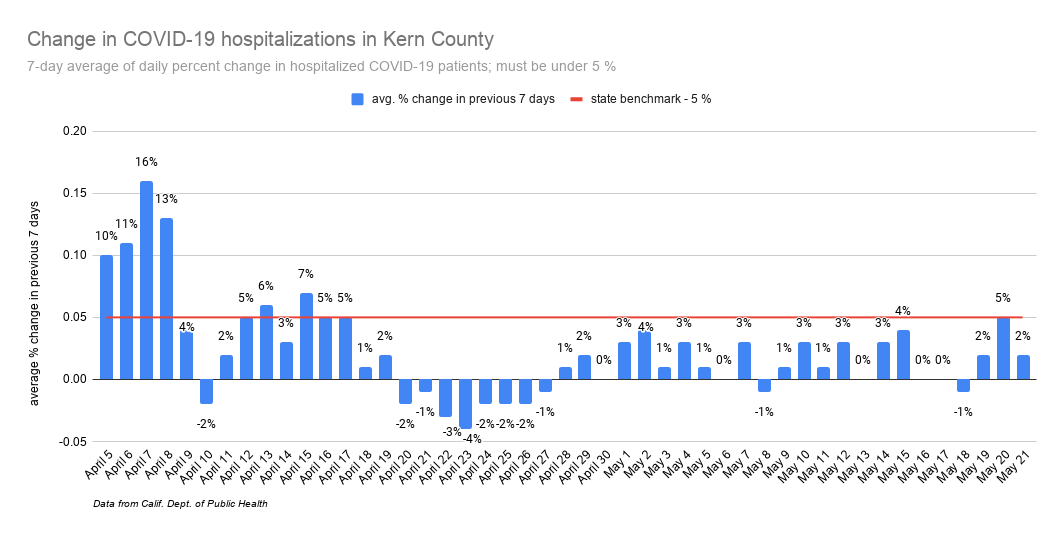 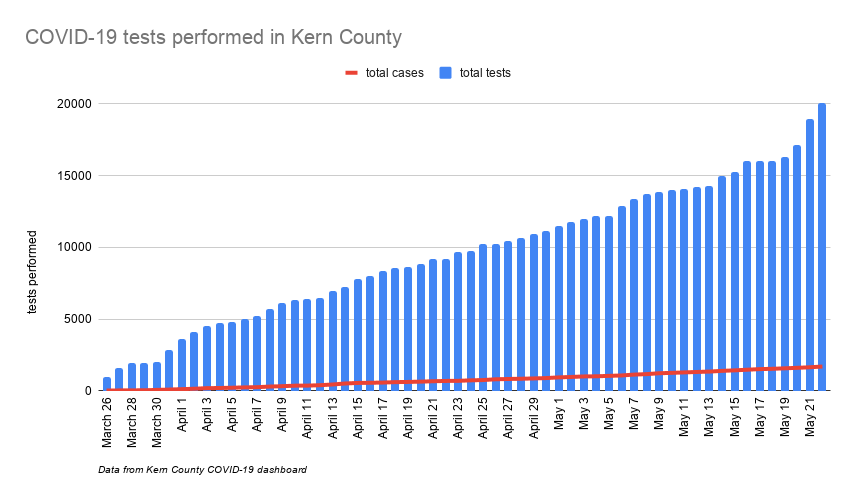 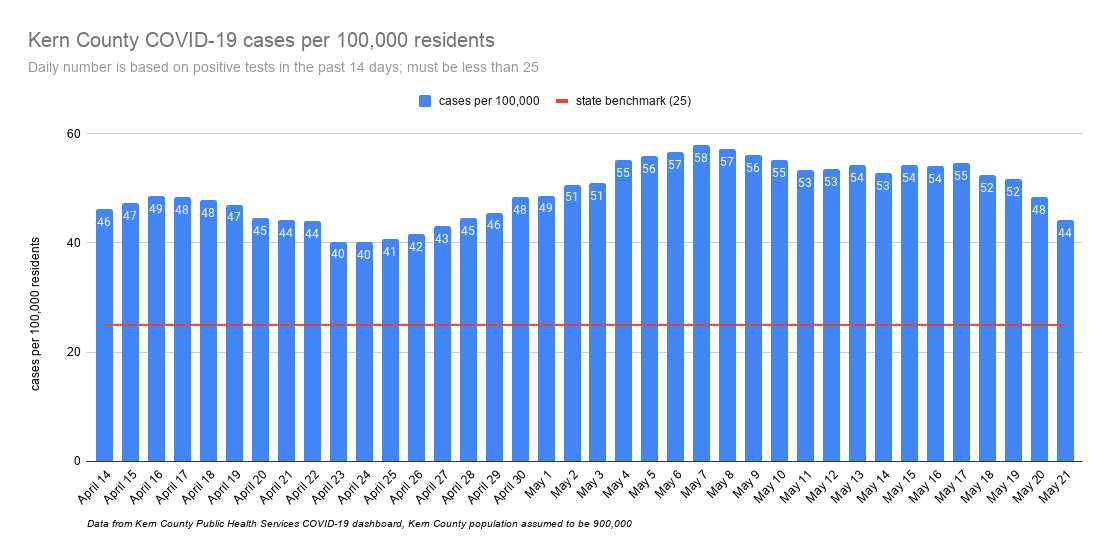 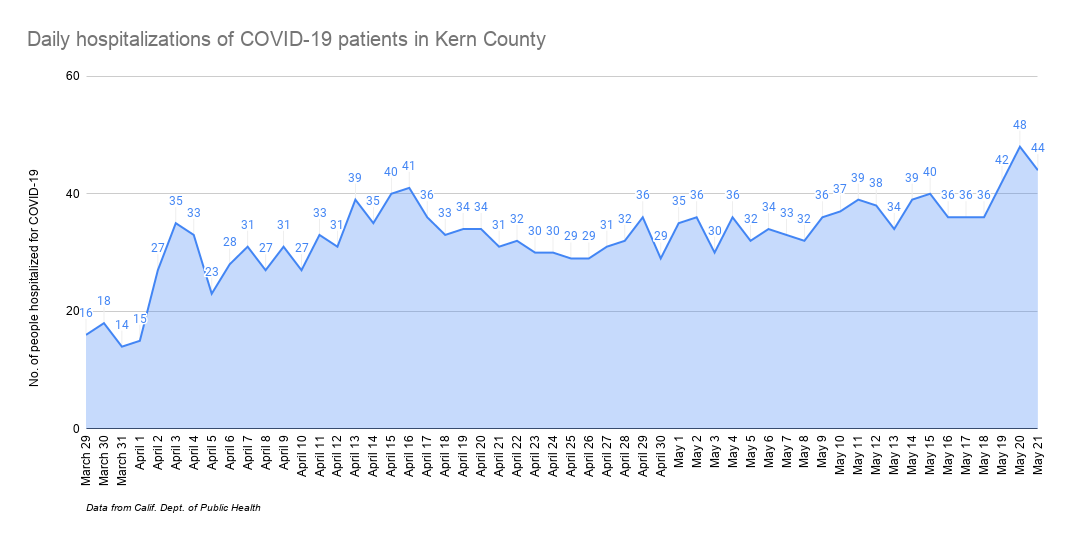 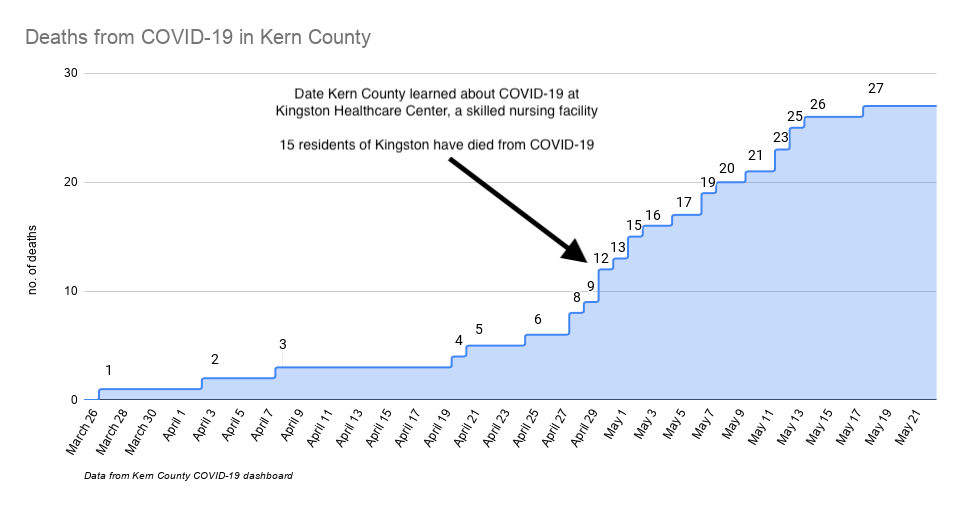 County leaders scored a major victory last week when Kern won approval from the state to accelerate the reopening of the local economy.

In order to do so, the county had to show that COVID-19 activity in Kern had stabilized by meeting certain epidemiological benchmarks. The county also had to demonstrate its preparedness to deal with the virus and provide a written containment plan.

The epidemiological benchmarks were the biggest obstacle for the county.

The data Kern provided to the state on Tuesday ultimately satisfied the criteria but the county is expected to maintain those levels to some degree. And that could prove difficult.

In fact, a review of available data by The Californian showed that Kern County fell below the state benchmark just a few days after it submitted its data to the state on one critical metric, stabilized rates of hospitalization.

There are no concrete details yet available on how strictly the county must remain in compliance with the benchmarks nor what happens if it doesn't. The California Department of Public Health has said that counties may need to slow their reopening or tighten modifications. County Chief Administrative Officer Ryan Alsop said this week that any such determination would be made in consultation with state health authorities.

The specific virus activity benchmarks the county had to meet were:

● The percentage of tests for COVID-19 that were positive in the previous seven days was less than 8 percent or fewer than 25 cases of the virus per 100,000 residents.

The Californian has used available local data to show how Kern met the current benchmarks.

Counties must show a stable hospitalization rate or have no more than 20 hospitalized COVID-19 patients on any day in the past 14 days.

Kern County has not had fewer than 20 patients hospitalized for COVID-19 since April 1; therefore, Kern had to show a stable hospitalization rate, demonstrated by a seven-day average of daily percent change in the total number of hospitalized COVID-19 patients of less than 5 percent.

The county submitted its data to the state Tuesday, using figures available through Monday, when its rate of change in hospitalizations was minus 1 percent. The rate rose to 5 percent on Wednesday, just above the state limit, because of 12 new hospitalizations between Monday and Wednesday. However, hospitalizations then decreased by four patients, and by Thursday the rate was back below the benchmark.

Less than 24 COVID-19 cases per 100,000 residents in the past 14 days or a positivity rate over the previous seven days of less than 8 percent

Kern County did not meet the state's per capita virus incidence metric, as shown in the accompanying graphic, but Kern did meet the alternate metric, a positivity rate under 8 percent, which was enough to satisfy the state's requirement.

Kern reported a positivity rate of 6 percent, with 218 positive tests out of 3,552 total tests done between May 12 and May 18. Precise data is not publicly available for The Californian to show this metric in graphic form.

The county was not required to meet benchmarks in these areas.

Deaths from COVID-19 in Kern County-2.pdf

Is it just me, or can anyone determine if any comments are directed towards their comments? I cannot. Only if someone begins their comments with the name of the person they are commenting on.

Thank you, Zeppo. Another sane voice!

You know what's funny, World society is STILL CONTINUING! Not everyone is back to work and WORLD SOCIETY is still continuing. It has been this way for 4 MONTHS and WORLD SOCIETY is still CONTINUUING! THE WORLD HAS BEEN SHUT DOWN! FOR 4 months! Every other country is bailing out their citizens so people are not left behind. Except for Trump's America! He would rather open the country up, assign death sentences, encourage protests fear and anger, instead of simply, agreeing with Democrat's to fund Americans for a short time to fuel the economy! In the short-term consumer purchases drive the economy, not jobs, moron. Consumer purchases create jobs. You can open up all you want but if consumer purchases decline jobs decline. I know, if we open up consumers will spend! Spend what? King Trump set record national debt numbers before the virus and declared bankruptcy 5 times! Everyone complains about violated freedoms of this and that. None of you complain King Trump put us here! "WE HAVE TREMENDOUS CONTROL OVER THIS VIRUS - 15 cases soon to be zero! SWALLOW a light bulb with a cup of bleach and a pinch of hydroxychlorine!"

Who is a "moron" but someone who would want a mentally incapacitated individual (Biden) as President.

He is decompensating again right before our eyes. Early on he was mostly coherent and entertaining. But now....

Oh Goody! the king has given permission to earn a wage. We can celebrate our freedom. USA USA

A majority of Americans are OK with a cautious reopening | Analysis by CNN's Harry Enten https://t.co/dilC9pO91M https://t.co/vZRVL6NKrp

I am nauseous as I write this, but I partially agree with ‘deeb. ‘deeb says time will tell because they still think millions will die and Trump killed them all. I say time will tell because it is hard to tell what is the truth and what is the lie with all the irresponsible news media/journalism we have nowadays. Instead of being objective and telling the story objectively it is more important to paint the story in political colors. Also, doom and gloom get’s more viewership/readership. So at the end of this is when we will know the truth (maybe). For now, it appears now that none of the scientists worst case scenarios are coming to pass. Since these types of pandemics almost always have a second wave, we’ll see what happens after that. Time will tell.....

UNBELIEVABLE!" it is hard to tell what is the truth and what is the lie " YOUR KING IS A PROVEN LIAR! MORE THAN 11,000 times in office! "What, Melania, Baron's being born now? I will be there as soon as I can as soon as I sign this $130,000 check. Ow! Stop that Stormy. Wait, is that the Times magazine where I was ORANGE "Man of the Year"?

Please- do us all a favor and get back on your meds- you're embarrassing yourself...

You prove what I wrote right almost every time you make a comment. Thanks for the validation MKIA.

I'm with Moardeeb.........Time will telll..........."The data Kern provided to the state on Tuesday ultimately satisfied the criteria but the county is expected to maintain those levels to some degree. And that could prove difficult."

Geez Yorkies- "I'm with Moardeeb" said no sane person ever...

30% to 50% immunity in our community if we would have listened to the science 8 weeks..... where did that that "faux come from"?

Is anyone else recognizing how ridiculous all of this has been? Kern County had to prove it had "stabilized"? I'm sorry, but when we were supposed to have been unstable? If Kern County were to test 100% of it's citizens for anti-bodies, what percent do you think would have had it? I would venture a guess that it is less than 10%. It is either less than 10% or this virus is simply not worth worrying about. If somewhere along the lines of 30% have had it (200,000 people?) and we have only had 20 hospitalizations per day then it isn't a bad virus at all. However, if only less than 10% have had it then why are we re-opening? They can't have it both ways, either a large percentage has had it and we are now on the other side and numbers are dwindling or hardly anyone has had it and the powers that be are effectively admitting that the stay-at-home orders were a vast over reach. I agree with the original intent of the stay-at-home orders based on the information we had at the time and what could have been. What I struggle with is why it took them so long to admit this virus wasn't causing the kind of damage they thought and reopen the economy 6 weeks ago. I hate to be the "main stream media" "fake news" guy, but come on. Is nobody going to investigate how politics played a part in this? Is the media not going to take any of these Governors to task for holding onto the stay-at-home orders for way too long in the face of overwhelming evidence that this virus is much, much less severe than originally thought. The media seems to be so in the tank on this (and I am not accusing the Californian of this) that even today there are massive numbers of people who receive the bulk of their news from places like CBS, CNN etc who still believe we should all be at home or vast numbers of Americans might die. The truth is the tally will likely be around the 150,000 mark. Horrible? Yes. But how much did the stay-at-home orders held reduce that number? Very, very little. In fact, we would most likely be at 30% to 50% immunity in our community if we would have listened to the science 8 weeks ago and started opening up the economy in a smart way i.e. open up restaurants and retail but ban concerts and other large events/arenas like theme parks and weddings. It would be nice if the main stream media was honest about all this even if it means they look like they are siding with Trump.

Or did they win? Time will tell. Neener neener.