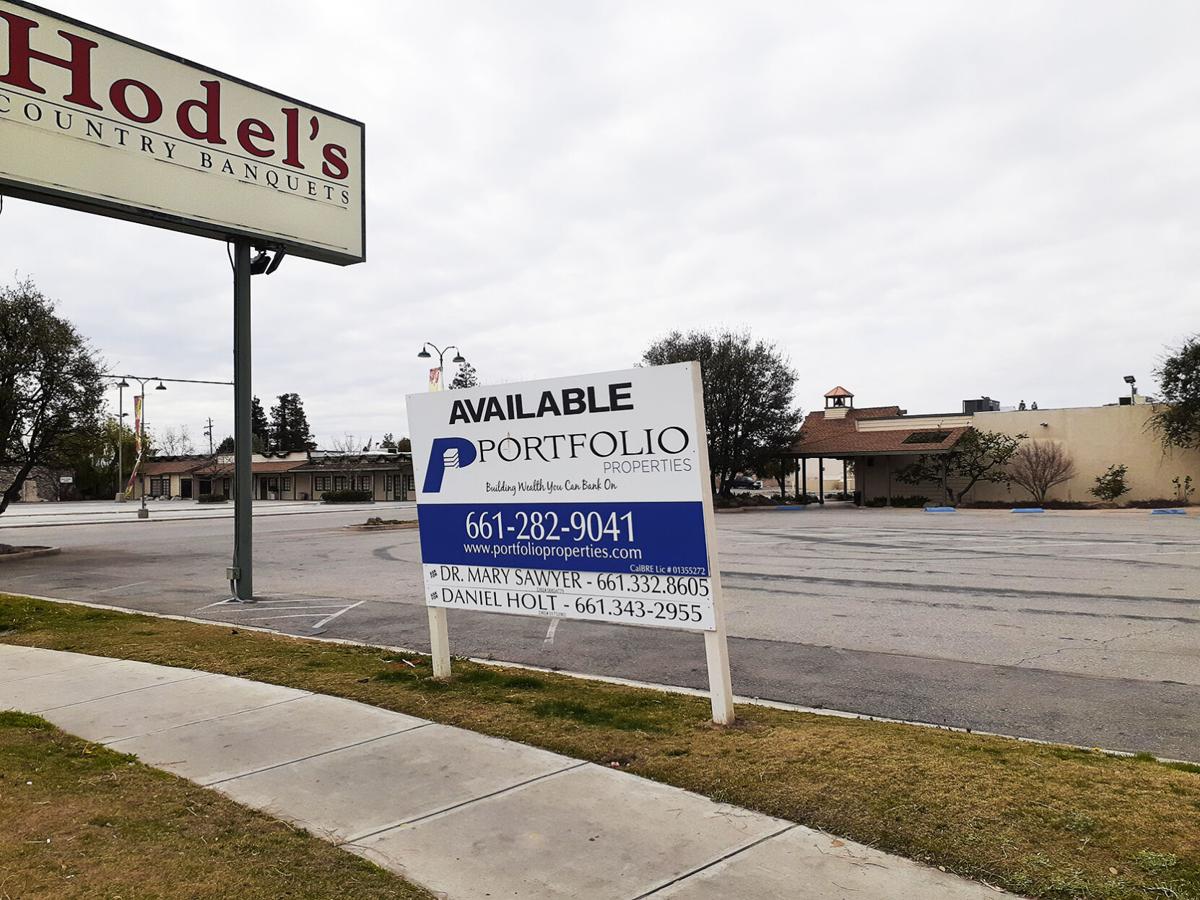 Hodel's Country Dining has listed for sale the northern 3 acres of its property along Knudsen Drive just west of Highway 99. It's the portion containing Liberty Hall, shown here on the right with the main restaurant and catering operation to the left. 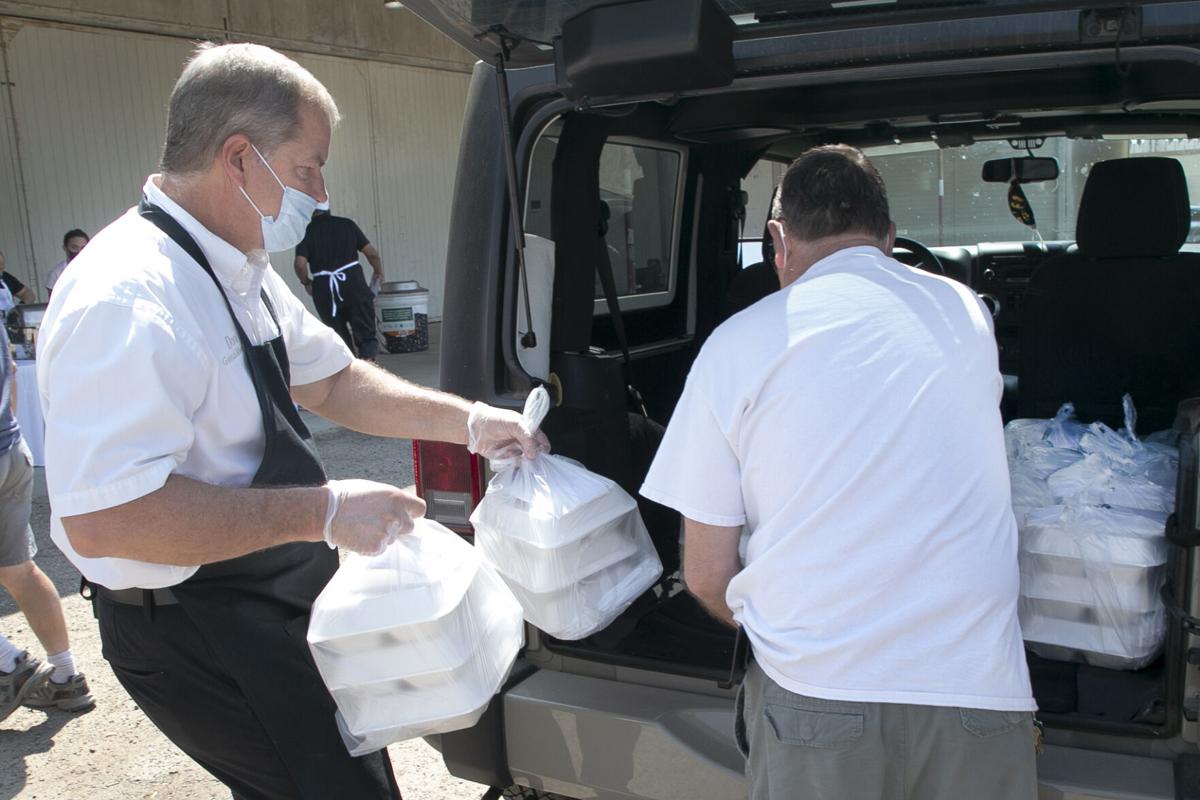 Don Hodel, left, helps load vehicles with boxes of food which were donated to local healthcare personnel hard at work during the COVID-19 pandemic in this August file photo. 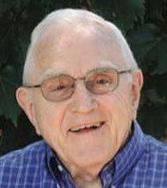 Hodel's Country Dining has listed for sale the northern 3 acres of its property along Knudsen Drive just west of Highway 99. It's the portion containing Liberty Hall, shown here on the right with the main restaurant and catering operation to the left.

Don Hodel, left, helps load vehicles with boxes of food which were donated to local healthcare personnel hard at work during the COVID-19 pandemic in this August file photo.

When members of the Hodel family say they're "going fishing" by putting up a for-sale sign on the northern 2.99 acres of their Knudsen Drive campus, they mean just that.

Maybe someone will bite and the proceeds will be used to pay off debts, Don Hodel said. Or maybe, now that the family restaurant he manages to the south is planned to reopen soon and new federal recovery assistance recently arrived, the family will instead keep and develop the property into an outdoors events facility.

But certainly, as long as a prospective buyer agrees to let the Hodels use some of the land for overflow parking, he said, "all options are on the table" — including but not limited to the listing agent's idea of marketing it for affordable housing development.

Don Hodel was cool to the idea of government-subsidized rental units where now stands Liberty Hall, one of the family's banquet buildings. But he didn't rule it out, even as he listed alternatives such as a hotel or a warehouse. Ultimately the choice belongs to his father, Bob, he said.

"Will it be housing, (if) somebody else offers, I don't know. All options are on the table," he said, emphasizing the family's main focus now is on pulling the restaurant and catering business through the uncertainty of the pandemic.

"We have to be flexible but we are going to try to do what we have for 53 years (in the restaurant and catering business) and see if we can make it," he said.

Liberty Hall, a 7,000-square-foot former market that the Hodels turned into a banquet hall after buying the property about 12 years ago, is the only thing standing on the property, which was listed for sale with an asking price of $2 million. It's one of two freestanding banquet halls on the campus the family owns along Knudsen Drive northwest of Highway 99 and Olive Drive.

Don's father, Bob, emphasized the southern portion of the campus is not for sale. That includes the main restaurant space dating to 1968 as well as attached facilities and the freestanding Kern Room banquet hall, together making up 26,000 square feet.

It'd be nice to pay off a loan the family has and become debt-free, Bob, 85, said. But he hesitates in part because "you never have enough room," he said. On top of that, a new federal Paycheck Protection Plan package has come through and so, "financially we're really sound."

Sawyer agreed a lot of different things could happen with the northern lot, including a joint partnership in which the family develops the property together with an outside investor.

She asserted affordable housing looks like the highest and best use of the property, which is zoned for commercial.

The property has attracted interest since an "available" sale sign went up more than a month ago, Sawyer said, declining to elaborate on expressions of interest that have come in so far. If a developer comes forward with a plan for subsidized apartments, "we're willing to talk to them."

"Everything's possible at this point and we're just happy that we're getting an opportunity to look at the options that the family has," she said.

Stephen Pelz, executive director of Kern County's Housing Authority, said he was unfamiliar with the details of the Hodels' property listing and couldn't offer specific comment but that the site was worth considering.

"I think anytime vacant commercial properties come on the market, it is worthwhile to evaluate the feasibility for multifamily housing as there is currently an oversupply of property with commercial zoning and an inadequate inventory of available property for multifamily," he said by email Wednesday.

He added there are many factors to consider when deciding where to site a housing development, "including the price, zoning, surrounding uses and proximity to amenities."