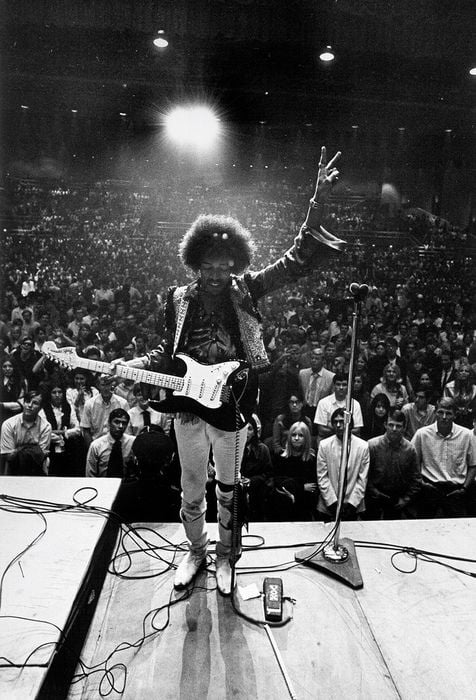 It was Oct. 26, 1968, when the Jimi Hendrix Experience came to the Bakersfield Civic Auditorium. Mitch Mitchell is shown playing drums. The event continues to fascinate local music and history fans. 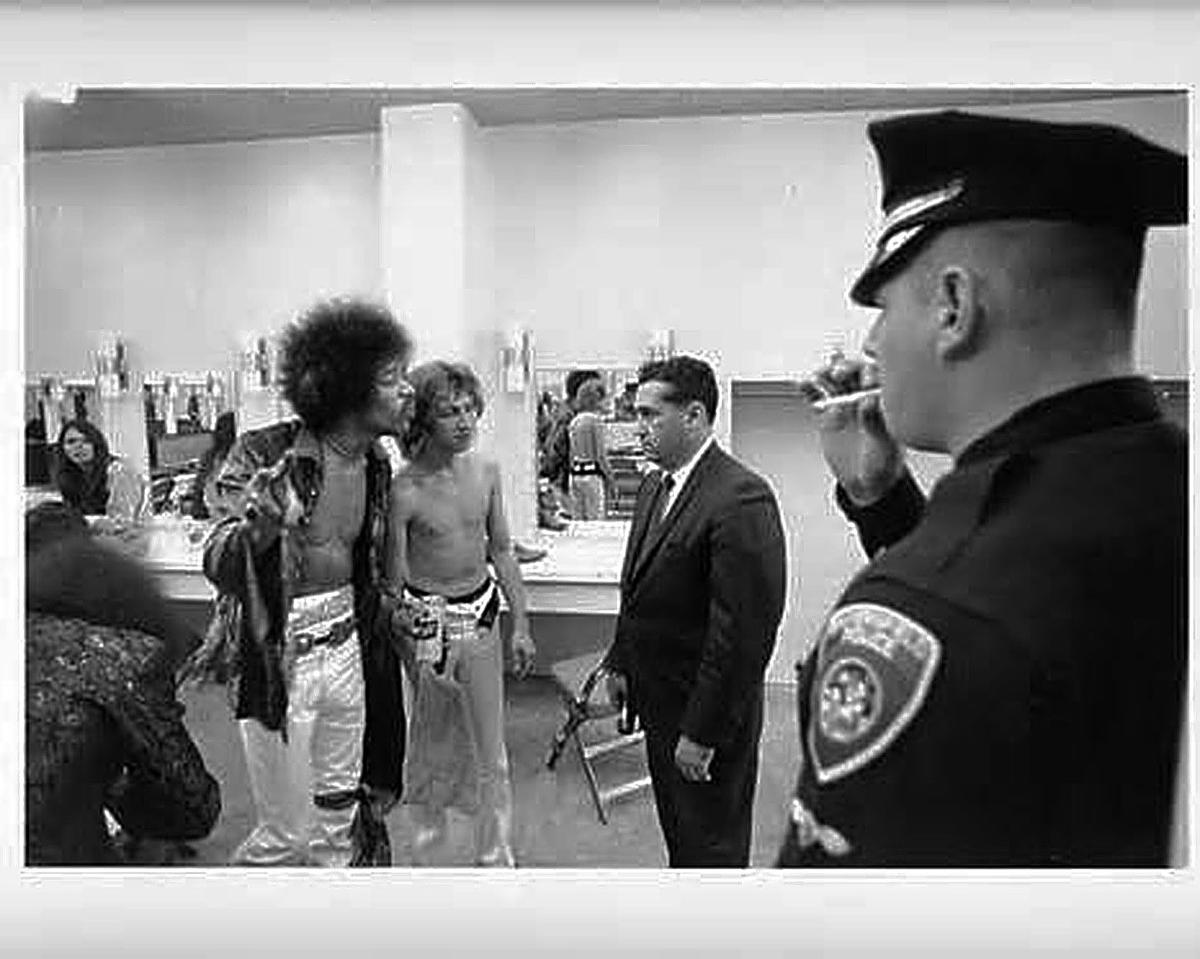 An angry confrontation developed between rock icon Jimi Hendrix and the manager of the Bakersfield Civic Auditorium after the power to the stage was cut off as the band's show was nearing its musical climax. The Jimi Hendrix Experience performed here in October 1968. Less than two years later, on Sept. 18, 1970, Hendrix would pass away into rock legend. 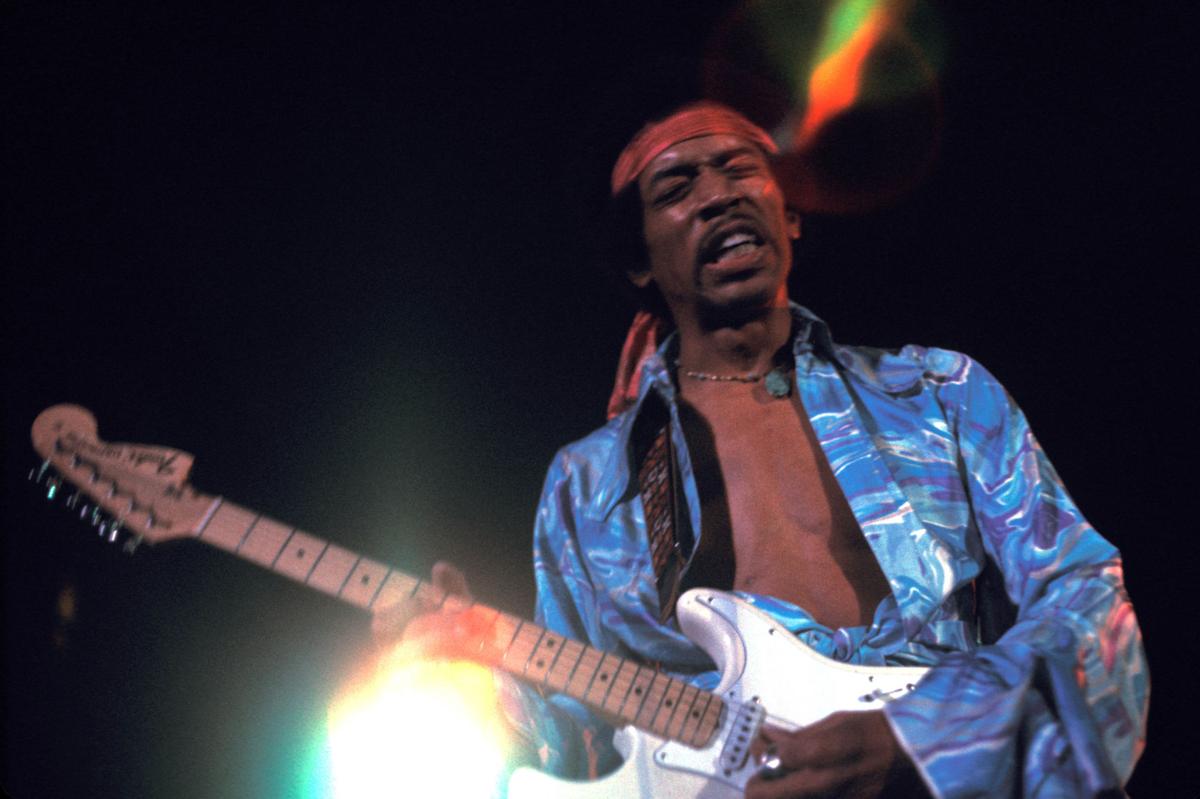 Jimi Hendrix performs live at a street concert in Harlem in August 1969, a year after his show in Bakersfield. He died Sept. 18, 1970 — 45 years ago Friday. (Credit Image: Douglas Kent Hall/ZUMAPRESS.com)

It was Oct. 26, 1968, when the Jimi Hendrix Experience came to the Bakersfield Civic Auditorium. Mitch Mitchell is shown playing drums. The event continues to fascinate local music and history fans.

An angry confrontation developed between rock icon Jimi Hendrix and the manager of the Bakersfield Civic Auditorium after the power to the stage was cut off as the band's show was nearing its musical climax. The Jimi Hendrix Experience performed here in October 1968. Less than two years later, on Sept. 18, 1970, Hendrix would pass away into rock legend.

Jimi Hendrix performs live at a street concert in Harlem in August 1969, a year after his show in Bakersfield. He died Sept. 18, 1970 — 45 years ago Friday. (Credit Image: Douglas Kent Hall/ZUMAPRESS.com)

The world was changing fast in 1968, from black-and-white to kaleidoscopic, and popular music was not just riding the wave, it was propelling it.

The Beatles had released their influential Sgt. Pepper’s album the year before. And as 1968 America exploded following the twin assassinations of Martin Luther King Jr. and Robert F. Kennedy, Led Zeppelin was formed from the ashes of the Yardbirds and James Brown appeared on national television in his own concert special.

And so it was against this swirling, almost surreal historical backdrop that thousands of young people, buzzing with anticipation (and who knows what else) poured into the Bakersfield Civic Auditorium on Oct. 26, 1968, to experience one of the most exciting and incendiary musical acts ever to enter the city limits:

“Seeing Mitch Mitchell nail his drums to the floor was a precursor of things to come,” recalls Sonny Lackey, who would later come to be known as Sonny California, harmonica player, percussionist and vocalist with Big House and numerous other musical acts.

The aspiring musician was just 16 when Hendrix trilled his first note that night. But he wasn’t quite the same when he left a couple of hours later.

“After the obligatory wait,” he remembers, “Jimi took a long toke stage right, flicked the roach at the Civic manager and plugged in his Strat to a wall of Sunn amps. He turned his guitar volume control up as he walked to the front of the stage trilling the fretboard, and did the splits for the intro to ‘Foxy Lady.’ It was otherworldly.”

Hendrix was just 25 and at the top of his game. “Electric Ladyland,” his third, and many believe his best studio album, had been released just 10 days earlier.

The Civic was packed with mostly white kids who were there to see the world’s top touring act, a black American guitar wizard backed by two British musicians, bassist Noel Redding and drummer Mitch Mitchell.

The night would later take on the characteristics of local legend, complete with competing and contradicting recollections and versions.

Rumors and stories surrounding what happened after the power was cut off by management remain to this day. But the man who had been hand-picked by Hendrix to document his American tour was on stage and backstage with Hendrix all that night shooting photos, and he is happy to put to rest some 47-year-old stories.

Despite differences in the way people remember that night, no one disputes the power and historical significance of Hendrix’s performance in an oil and ag town that had come to be known as Nashville West, as the proud home of Buck Owens and Merle Haggard, country music superstars who were then at or fast approaching the pinnacle of their careers.

And no one there that night could have known that less than two years later, on Sept. 18, 1970, Hendrix would die in his sleep in London after taking barbiturates.

For rock ‘n’ rollers, Hendrix’s untimely death, along with the loss of Janice Joplin, The Doors’ Jim Morrison, and Kennedy and King, seemed to signal the end of an era.

But for those in the crowd that night, the ‘60s were still in full flower.

Mitch Gordon was only 14 when he and his friend Dave Freeman settled in about five rows back from the stage.

Gordon, a budding guitarist, and Freeman, a drummer, would both go on to play music professionally.

“Hendrix had already become a well-established, larger-than-life cultural icon and an unrivaled musical phenom,” Gordon recalls in an email.

“The anticipation of seeing Jimi Hendrix and the Experience was so great, I hardly remember the opening band. When Jimi and the fellas finally hit the stage it seemed like the audience was almost stunned at first. Everyone was kind of reserved and mesmerized.

“It was like nobody knew how to act. I don’t think the majority of us had ever seen anything or anyone like that,” he says. “That’s one of the reasons it was a life-changing event for me and so many others. This was completely new territory.”

It was as if Hendrix had come to town to provide 3,000 teenagers with a rite of passage, not just into adulthood, but into a new universe. Together, Hendrix, Redding and Mitchell were somehow able, through the power of music, to tear a hole in the sky and show an auditorium full of fresh-faced teens something beyond the conventional reality that had been taught to them at home and at school.

“From the moment Jimi cranked up the Experience the sound coming off the stage was astonishing: immediate, jaw-dropping, proof positive that the immensity of Hendrix’s talents had not been overstated,” recalls Eric Griffin, who was just 15 at the time.

Guitarist-keyboardist-vocalist Terry Huston, who is still active in Bakersfield musical venues, was in his senior year at Garces High School when he saw Hendrix at the Civic. He had previously seen the Beatles at the Hollywood Bowl in ’66, and rates that concert slightly higher than the Hendrix event. But only slightly.

Hey, it was the Beatles, after all, he says, laughing.

His command of his instrument and the astonishing sounds he was able to pull from it – without a rack of pedals and effects – was amazing.

“I’m so grateful I grew up in that era, the music and the movement was unlike anything that came afterward.”

Hendrix, Gordon says, was an incredibly charismatic showman, but more importantly he was an unbelievably gifted, innovative, and virtuosic guitar player.

“I mean who even knew you could do that, especially live and in person without the benefit of overdubbing and studio effects?” he says. “It opened up an entire universe of new possibilities and raised the bar into the stratosphere. The Strat-o-caster-sphere!

“The other amazement, which I don’t remember giving too much credence to at the time, is that he was a black man performing in a certifiably bigoted, redneck town playing to an almost exclusively white teenage audience,” Gordon remembers.

“Tensions must have been high among community leaders. It’s no wonder some sh** came down. I remember feeling frustrated, ashamed, and embarrassed by the negative events that unfolded.”

Indeed, the show ended in anti-climax when, it is believed, the general manager of the Civic Auditorium cut the power to the stage.

“At the time I thought that the amplifiers had merely failed but apparently it was a premeditated act of aggression resulting in an altercation between Jimi and the powers that be,” Gordon recalls.

“I’ve heard varying accounts, with some saying that they spent the night trying to get him out of jail and others claiming that it was all settled backstage with a bribe.

“Either way, more than a few people have told me that they saw Jimi Hendrix (with his girlfriend) in a new Corvette at the Jumbo Burger on Golden State Avenue after the concert, and that he was super friendly and personable before driving off into the night.”

The story of the confrontation with the manager of the Civic and the subsequent involvement of the Bakersfield Police Department have become the stuff of legend, as has the prosaic visit by Hendrix to a local burger joint before flying … er, driving off into a rock star-lit night.

Ron Raffaelli, who has dozens of album covers and thousands of rock star portraits and performance photos to his credit, was chosen by Hendrix to photograph the band’s epic American tour in 1968 and ’69.

And while there’s no way to tell nearly five decades after the event exactly which stories are accurate, Raffaelli’s account is fairly convincing, as he was with Hendrix before, during and after the Bakersfield performance.

“Jimi was a consummate showman,” Raffaelli remembers. “A lot of rock groups have no connection with their audience. They just stand up there and play.

The band was playing its final number, Raffaelli recalls of that night, and to put it bluntly, Hendrix treated his concert performances as a metaphor for an act of love – the intensity ebbing and flowing, and then climbing higher, and then higher still.

The performer’s hand was moving on his guitar neck in a way many there wouldn’t necessarily want their grandma to see. With the sonics screaming, the crowd roaring, the sweat pouring, guitar strings at the breaking point, suddenly silence fell like a sledgehammer on a pillow.

But at that moment, he was livid.

“Jimi rushes off stage. I follow him,” Raffaelli recalls.

There’s yelling, cursing. Angry guitar god faces angry manager, who, according to Raffaelli, tells Hendrix the show was getting out of hand, and had to end.

Then the N-word was used, Raffaelli says. And suddenly he had to get between Hendrix and the man, causing the manager to fall back slightly against a table.

Within minutes, several police officers were in the room. According to the veteran photographer, the manager claimed he was assaulted by both Hendrix and Raffaelli.

“I was the only one who made physical contact,” Raffaelli says. Despite the many stories that have Hendrix slugging the man, it simply did not happen.

If it had, Hendrix would have spent the night in jail, and it would have been a national news story.

Certainly, the police were there, as Raffaelli has photographic proof. One cop is shown smoking a cigarette.

In the end, Raffaelli says, no one was arrested. But police escorted Jimi and his entourage – including Hendrix and Raffaelli in one limousine and Redding and Mitchell in another – to the 99 freeway onramp.

They headed south. Never to return.

Others may swear the stories are true. But that’s OK. The night Jimi Hendrix came to Bakersfield is no longer an event. It’s a legend.

And like Hendrix himself, legends take on lives of their own.

The late actor and comedian Robin Williams was known to occasionally utter this little gem: