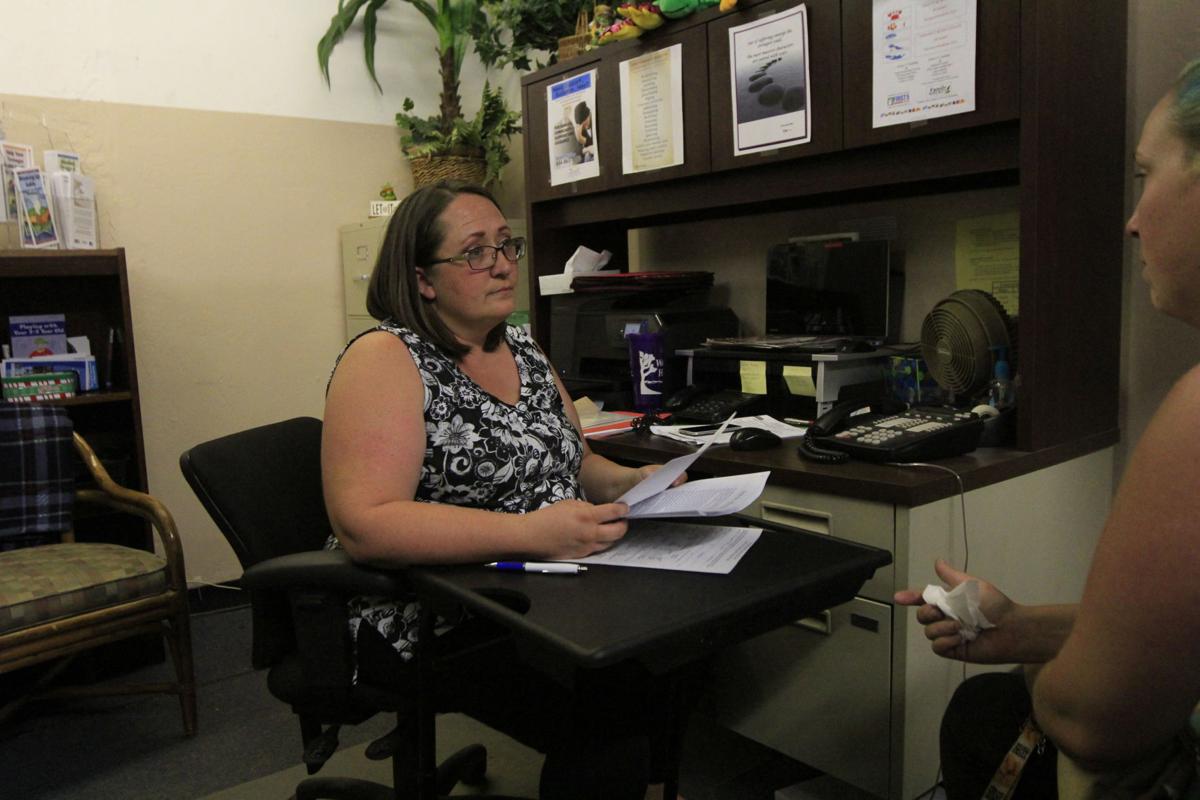 Christy Luton, a victims advocate for Women's Center High Desert, assists a woman facing domestic violence. Once a victim herself, Luton has overcame much of the same childhood trauma so many of her clients have faced. 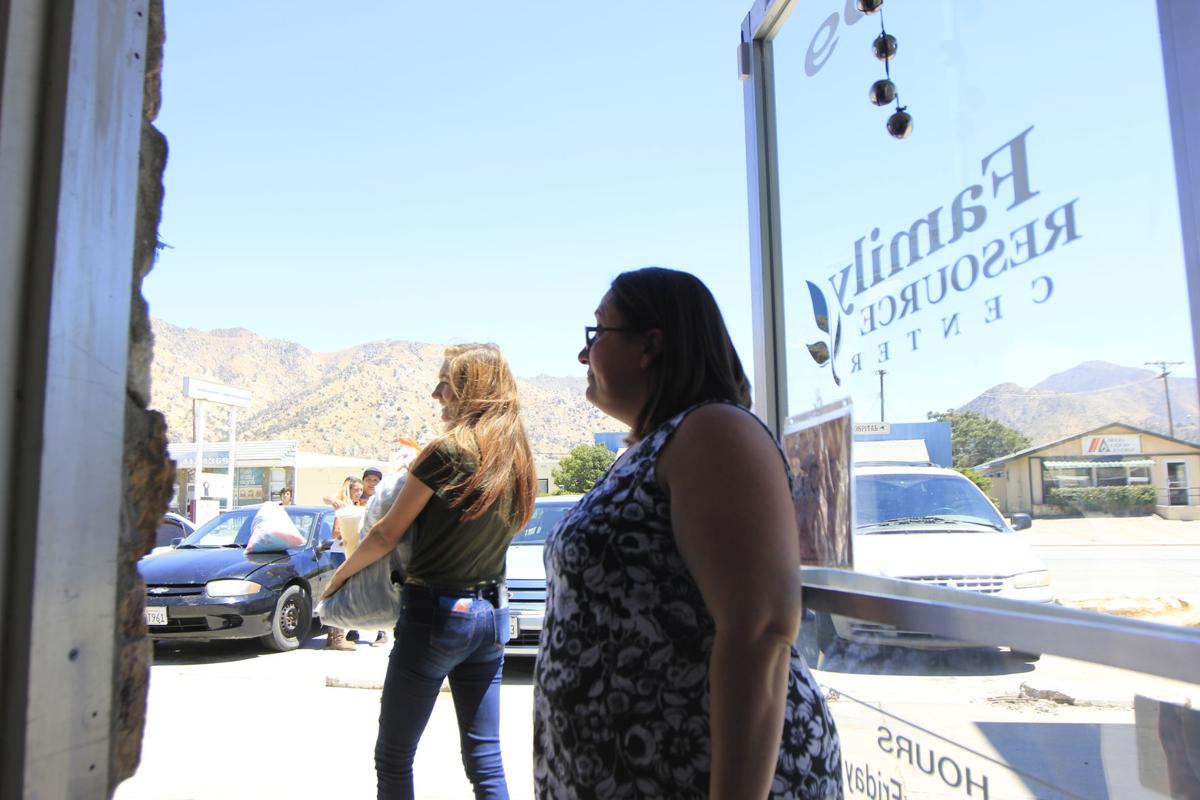 Christy Luton gifts some clothes to a few of her clients at Women's Center High Desert in Lake Isabella. 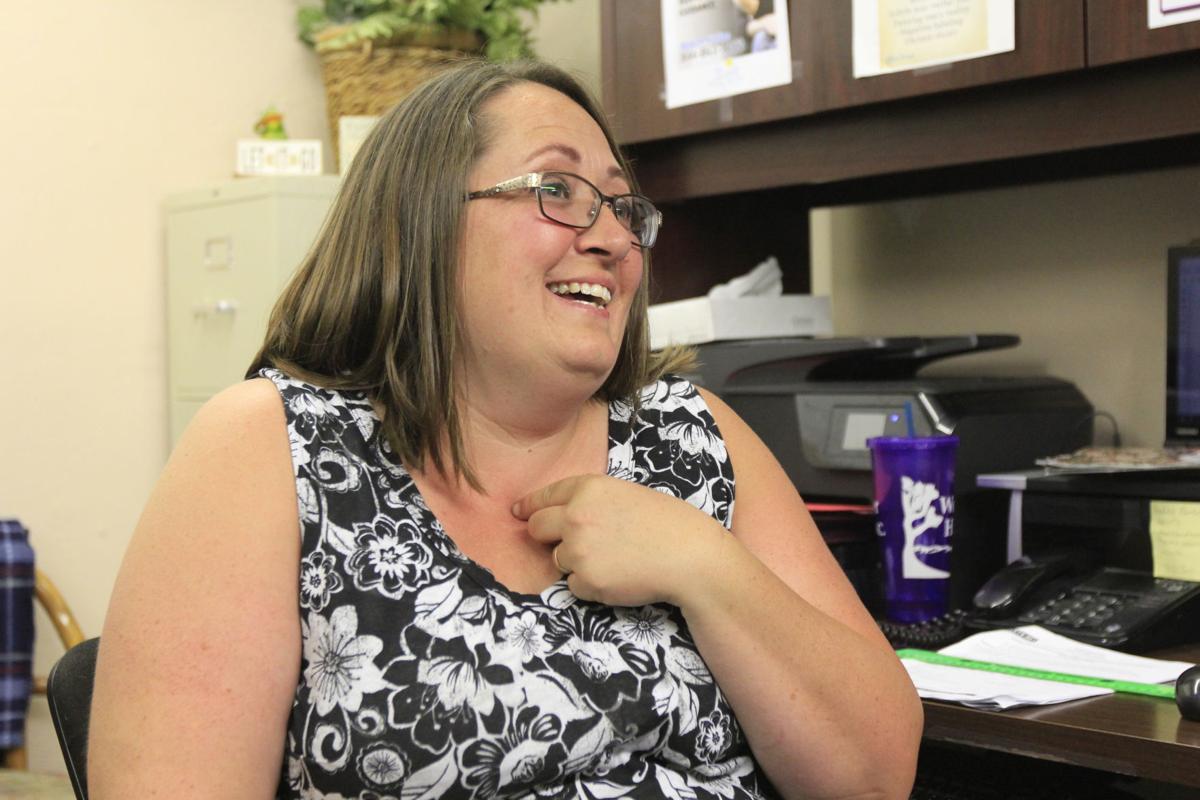 Christy Luton, a victims advocate for Women's Center High Desert, assists a woman facing domestic violence. Once a victim herself, Luton has overcame much of the same childhood trauma so many of her clients have faced.

Christy Luton gifts some clothes to a few of her clients at Women's Center High Desert in Lake Isabella.

Christy Luton can’t remember where she was or what was going through her head 22 years ago when she took her first hit of meth.

She was 20, and dealing with deep trauma. Her father, with whom she had a strained relationship, died a year prior. She got engaged to her fiance, then found out he was cheating on her. She miscarried a child.

She was dating a guy she worked with in the grill at Rio Bravo Country Club. He looked normal. He did meth. He gave her a hit. She was hooked instantly.

“I didn’t know it then, but realize now that it numbed all the pain,” Luton said.

That 6-1/2-year-long addiction was a lifetime ago, before Luton got clean and before she confronted the demons of her childhood.

There was the abuse she suffered at the hands of her brother; the abandonment from her father, who started cheating on her mother before she was born; the verbal insults; the lack of love she felt from her family.

That was her life before she became a victim’s advocate in her hometown of Lake Isabella, helping those struggling with the same kind of childhood trauma she endured, something she said contributed to setting her on a temporary course of addiction, abuse, loss and hopelessness.

She fought to overcome it. She now spends most days at Women’s Center High Desert running support groups, juggling walk-ins, appointments and telephone calls. There’s no shortage of people in impoverished Lake Isabella who need help, and no shortage of hopelessness. She’s there to give them hope.

Luton is one of the resilient ones. Scores of children growing up throughout Kern County endure early trauma, commonly known as adverse childhood experiences, or ACEs. If they suffer enough trauma, they could develop what doctors and researchers call toxic stress.

That constant overloading of the body’s stress-response system often leads to a series of health issues over a lifetime, and those afflicted are more likely to abuse alcohol, turn to injection drugs, die by suicide and contend with cardiovascular health problems. Their lifespans are significantly shorter.

In Bakersfield, more new mothers endure ACEs than anywhere else statewide, according to a 2011-12 California Department of Public Health survey that asked 14,000 respondents to list the number of traumatic experiences they endured in childhood.

The  Californian conducted a similar survey anonymously online. The results? Roughly 56 percent of respondents scored four or more ACEs, the generally accepted threshold for when toxic stress begins to set in. Among the 80 respondents, 36 percent had five or more ACEs.

Some said they had incarcerated parents, abusive fathers and were sexually abused.

Most frequently, respondents said they lived with someone struggling through depression or a problem drinker, had divorced parents, and felt humiliated or insulted by their parents while growing up — the same issues Luton struggled through as a child.

“I could see our whole valley in it,” Luton said, referring to the questionnaire and the struggles Kern River Valley residents face. She took the test herself and scored a four, which she initially didn’t think was problematic. “Then I looked at what the results meant. It made total sense with the choice I ended up making for so many years.”

'I BECAME HIS PUNCHING BAG'

Her parents fought relentlessly. One time, Mom tried jumping out of the family car. She opened the door and Dad grabbed her by the neck to pull her back in.

Then one day when Luton was 12, her father left after her mother – tired of his affair – insisted on a divorce. She could hear her parents arguing in the bedroom.

Dad blamed Luton and her brother. The two squabbled and argued regularly, Luton said. He couldn’t handle their fighting anymore, she recalled him saying.

“There had to be some kind of turmoil in the home that created the tension in us. It couldn’t have been us,” Luton said. “We were just kids.”

From that point forward, the fighting became violent.

Mom had to support the kids, so she worked two or three jobs. Luton tried to hold the family together as a teenager, but that meant bossing around her younger brother. He didn’t like that.

“My brother was filled with anger,” Luton said. “I became his punching bag.”

Little things set him off. Like Luton asking him to do his chores.

He would hold her down and hit her, kick her in the shins with his boots on, and snap her with wet towels to leave welts. One time, he chased her through the house with a poker from the fireplace swinging at her head. She ran to her bedroom and locked the door. He put a hole through it.

“I knew he was mean to me. I didn’t think of the word abuse,” Luton said. “I thought it was normal sibling behavior.”

So much of Luton’s childhood and adolescence seemed normal to her at the time. Her father mishandling her mother. Her brother coming after her with a metal poker. Her boyfriend with the meth addiction. All normal.

She has since repaired her relationship with her brother and her family.

"We have both grown and gotten a lot of healing from the pain in our childhood," Luton said.

ABUSE AS A 'COMFORT ZONE'

It’s a wonder how Luton didn’t become a statistic herself.

And it’s often perpetuated in a cycle.

Most of Luton’s clients have suffered domestic violence. Many were abused by parents or siblings growing up, Luton said.

“Every once in a while, I’ll get somebody who will say they’ve never had an abusive relationship, had a good childhood, then all of a sudden they meet this guy and he hits her and they want a restraining order and they’re done,” Luton said. “They’re going to be OK.”

The others? They let the abuse go on longer if they dealt with it as children, Luton said. One woman who came in on a recent Monday has been telling Luton for a year that she would file a restraining order against her abusive boyfriend, but never follows through.

“I’ve never done this before,” the 35-year-old mother of three told Luton.

It’s hard for her to take that first step because it means stepping away from a life, however dysfunctional, that she has always known. Luton calls it a “comfort zone.” To her, abuse is normal, and she doesn’t know how to deal with somebody who isn’t abusive. Those are the types of women Luton worries about.

She credits her recovery to a few things: Teen Challenge — an intensive drug rehabilitation program she attended in her mid-20s — resilience and religion.

After sobering up, she dealt with the guilt and shame of placing her then-1-year-old child in dangerous situations while she was using.

“It was quite a few years of working on that and getting my mind straight and my heart right,” Luton said. “Then I worked on changing my DNA so that my daughters’ DNA is changed so that they don’t take on what I went through.”

“I firmly believe it gets into your DNA,” Luton said.

That’s not just an aphorism. Studies show that children who endure toxic stress are more likely to pass those traits onto their kids through changes in their epigenetic markers, said toxic stress expert Dr. Nadine Burke Harris, who runs the Center for Youth Wellness in the Bay Area.

The cure to all this toxic stress? Resilience and nurturing relationships, experts say.

Luton knows this. She holds support groups for battered women regularly who have come to stop relying on her, and start leaning on eachother.

“They support each other,” Luton said. “That’s exactly what I want.”

Although many of them have stories of childhood trauma, Luton tells them not to share the gory details. It could be a trigger for somebody else that could send them into a whirlwind of emotions.

“I’m not a therapist or a psychiatrist. I don’t want to deal with the past. I want to deal with right now,” Luton said. “All that stuff happened. We can’t go back and change it. What are we going to do now? We have to fix how we cope.”

At her office, a 25-year-old woman with blond hair and purple streaks came in on a Monday afternoon, teary-eyed, despondent and defeated.

She had just been abused by her boyfriend and she wanted a restraining order.

She has a look about her that abusers can see from a mile away, Luton said.

“Do you know how I escaped my abuser?” Luton asked the girl. “He got high on weed and meds then passed out. I took the car and my girls to escape.”

She felt more at ease. Luton had faced the same struggles as she, but escaped.

“Have you thought about counseling? A lot of this — it may not be you. That’s what we can uncover during counseling,” Luton said. What she was hinting at was a cycle of abuse getting passed down to the woman, changing her identity and setting her on a course of despair just like it has for so many others throughout the valley.

She looked up, tissue in her hand, tears down her face.

“I could probably use it.”

​The Californian's Harold Pierce wrote this story while participating in the USC Center for Health Journalism's California Fellowship. He can be reached at 661-395-7404. Follow him on Twitter: @RoldyPierce.

This story is part of a months-long series undertaken in partnership with the USC Center for Health Journalism exploring the impacts of childhood trauma, and how toxic stress creates poor health outcomes in Kern County communities.

Toxic stress is a killer — what can we do about it?

Isaiah Mosley’s father was gunned down when he was just 3 years old. Years later, his brother was killed in a high-profile shooting outside a …