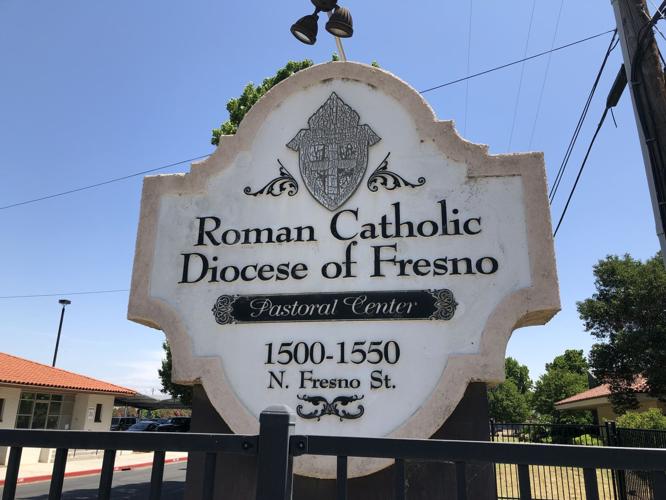 The Roman Catholic Diocese of Fresno. 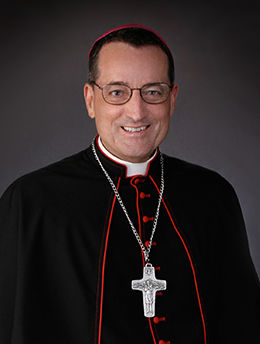 Bishop Joseph Brennan of the Diocese of Fresno will serve as keynote speaker for the third annual Kern Catholic Prayer Breakfast on March 12. 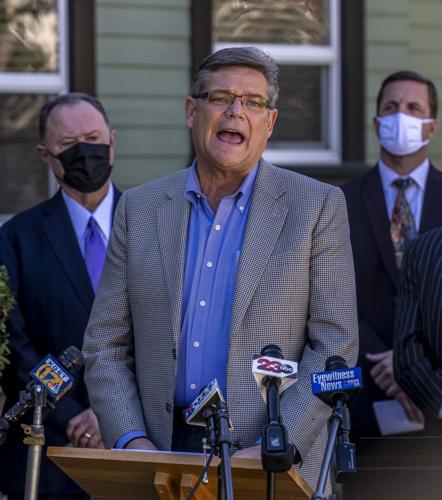 Monsignor Craig Harrison addresses his resignation in February 2021 at the law offices of Kyle J. Humphrey.

The Roman Catholic Diocese of Fresno.

Bishop Joseph Brennan of the Diocese of Fresno will serve as keynote speaker for the third annual Kern Catholic Prayer Breakfast on March 12.

Monsignor Craig Harrison addresses his resignation in February 2021 at the law offices of Kyle J. Humphrey.

The Roman Catholic Diocese of Fresno has released a list of "credibly accused clergy" that includes Craig Harrison, the former Bakersfield priest who resigned his position in February after allegations against him went public 15½ months ago.

The list, arriving Friday months behind schedule after a two-year review process, named 37 priests, deacons and others who the diocese said were the subject of accusations deemed "more likely than not to be true." Many people on the list are dead or missing, and none continues to serve the diocese.

Bishop Joseph V. Brennan said in a written statement God's people are a family that is dysfunctional at times, and that some members of that family — clergy in positions of trust and leadership — "have behaved badly."

"That is putting it mildly. Let's face it, acts of abuse upon the innocent and vulnerable are truly evil, plain and simple," Brennan wrote. "The pain, suffering, betrayal and loss of innocence felt by many victims lasts a lifetime."

Attorneys for Harrison could not be reached for comment Monday. But one of them, Bakersfield lawyer Kyle Humphrey, released a statement Friday to KGET-17 saying he was not surprised at what he called "outrageous threats of vindictive retaliation against Craig."

The statement published on the TV station's website alleged Brennan had threatened to add Harrison to the list unless the former priest at St. Francis of Assisi Catholic Church shut down his business as a spiritual counselor and "disappear from public life." The statement reiterated Humphrey's assertion the bishop had told him and others Harrison would not be on the list.

"Since then, there has been no new information and no support whatsoever for the claim that the accusations are credible," Humphrey reportedly stated. "To this date, the Bishop has refused to interview Craig or review any of the overwhelming evidence proving his innocence. Craig remains innocent, all information available to us supports his innocence, all information available to the Church supports his innocence, and the Bishop remains the same immoral actor he has been since the beginning of his tenure. This is nothing new."

The list, and Harrison's inclusion on it, rekindle a dramatic series of accusations and counter-accusations that have divided members of the local Catholic community, many of whom remain loyal to a man who for many years was the public face of St. Francis Church.

In April 2019, a man anonymously identified as a former altar boy at St. Joseph Catholic Church in Firebaugh, told the diocese Harrison inappropriately touched him on three occasions when the man was a teenager in the 1990s. The same month those accusations were filed, Harrison was placed on administrative leave. Soon afterward, another man contacted the diocese accusing Harrison of "inappropriate behavior" while the alleged victim was a minor at St. Patrick's Church in Merced in 1988.

In June, two unnamed plaintiffs filed lawsuits alleging Harrison sexually assaulted them as minors while his former supervisors within the diocese looked the other way.

Harrison has repeatedly denied ever acting in a sexually inappropriate way. His lawyers allege Harrison's accusers are trying to extract payment from the church.

At least six people were left off Friday's list who had been included on a June 2019 list of Fresno diocese clergy released publicly by the Los Angeles law firm of Jeff Anderson & Associates.

The law firm criticized the diocese for the timing of its release. The firm said the diocese was among just 16 dioceses that had not released a list of credibly accused clergy prior to Friday. It also called the release of the list a bare-minimum step to protect the vulnerable and heal the wounded.

"The delayed release of this list is long overdue and a thinly veiled attempt to stifle survivors and public scrutiny," the firm said in a news release Friday. "Survivors have been waiting decades for accountability and transparency and they deserve more."

The diocese said it retained Kinsale Management Consulting, a firm specializing in priest abuse cases, to go over more than 2,800 clergy files, some as old as the 1900s, to identify any priest, deacon or member of a religious order that has faced allegations of sexual abuse involving a minor within the diocese's territory.

When that review was completed, the findings were sent to a diocesan review board of 10 men and women tasked with weighing whether the various allegations were credible. The board forwarded its final list to Brennan, who determined such accusations existed against 24 incardinated priests, seven extern priests and six members of various religious orders.

Brennan stated the list will be updated as new information becomes available and that everything must be done to prevent abuse from happening within the diocese. He added that he had intended to release the list during Lent and that it is never too late to do the right thing.

The diocese further stated that inclusion on the list does not mean the clergy member is guilty or has been convicted or admitted to alleged abuse. Furthermore, it said accused clergy were not named on the list if allegations against them could not be properly investigated.

The diocese says on its website all its staff and volunteers are the subject of background checks and trained to recognize and prevent child abuse. It says anyone who suspects such a crime is directed to contact law enforcement and to contact the diocesan Victim Assistance Coordinator at 559-488-7400.

The full list of accused clergy is posted online at https://dioceseoffresno.org/list-of-clergy/.

1998: The Firebaugh Police Department receives a report from a man alleging Monsignor Craig Harrison abused him at St. Joseph Catholic Church in Firebaugh, where Harrison served as pastor from July 1, 1992 to June 30, 1999.

2002: The same accuser who made accusations against Harrison to Firebaugh police makes allegations to the Roman Catholic Diocese of Fresno, which investigates and deems them unsubstantiated. The same year, the Bakersfield Police Department receives an anonymous allegation of inappropriate contact by Harrison involving a group of teen juveniles. The department says it cannot corroborate the accusation and closes the case.

2004: A retired FBI agent in Merced, assigned to investigate unrelated accusations against someone else, details allegations Harrison had sex with two high school students while he was a pastor in Firebaugh and that he would examine boys’ private parts every morning to check whether they were using drugs.

April 12, 2019: A man tells the Fresno diocese he was touched inappropriately by Harrison three separate times while serving as a 16- or 17-year-old altar boy at St. Joseph.

April 25, 2019: The diocese announces the most recent allegations and places Harrison on administrative leave. That same day, another man contacts the diocese alleging "inappropriate behavior" when he was a minor at St. Patrick's Church in Merced in 1988. Harrison denies the accusations.

May 2019: Former Harrison assistant Ryan Dixon alleges he was a victim of Harrison's "inappropriate touching, lies, manipulation and abuse of power." Dixon further alleges he witnessed Harrison touching and being alone with children and giving them gifts and money. Harrison issues a public statement defending himself against accusations of sexual misconduct and expressing sadness at having been "left to fight without support" from the diocese. The same month, a man who grew up in Bakersfield and attended St. Francis tells Bakersfield police he was sexually abused as a minor by Harrison seven to nine times during a four-year-period that started in 1989.

July 2019: Bakersfield police release an investigation report painting Harrison as either a hands-off father figure preaching tough love or a sexual predator who groomed his victims using guilt and gifts. It says a detective assigned to the case could not corroborate allegations the priest had touched anyone inappropriately, and concluded some acts Harrison was accused of allegedly occurred too long ago to be prosecuted.

August 2019: Harrison sues Steven Brady and the activist group Roman Catholic Faithful, saying Brady shared and published defamatory statements during a May news conference at a Holiday Inn in Bakersfield.

November 2019: The Merced County District Attorney’s Office says it will not file criminal charges against Harrison following allegations of inappropriate touching. It notes that because the incidents allegedly happened in 1987 and 1988, charges are prohibited because the statute of limitations had expired.

February 2020: Harrison files a defamation lawsuit against the Roman Catholic Diocese of Fresno and its chancellor/director of communications, who he alleges made defamatory statements on behalf of the diocese in May 2019. Separately, the Fresno County District Attorney's Office says it will not file criminal sexual assault charges against Harrison, even though allegations against him seemed credible, because the statute of limitations had expired.

December 2020: The Catholic church initiates canon law proceedings against Harrison after he refused to drop his defamation lawsuit against the diocese and two of its officials.

February 2021: Harrison resigns as pastor of St. Francis Church. Bishop Joseph V. Brennan later announces Harrison will be laicized, after which time he will no longer be considered a member of the clergy.

May 2021: A Fresno County Superior Court judge dismisses the lawsuit Harrison filed against the diocese.

June 2021: Two unnamed plaintiffs file lawsuits alleging Harrison sexually assaulted them as minors while his former supervisors at the diocese, St. Francis of Assisi Catholic Church in Bakersfield and St. Joseph Church in Firebaugh looked the other way.

Aug. 6, 2021: Harrison's name appears on a list released by the diocese of 37 clergy within the diocese's territory who have been credibly accused of sexual abuse involving a minor.