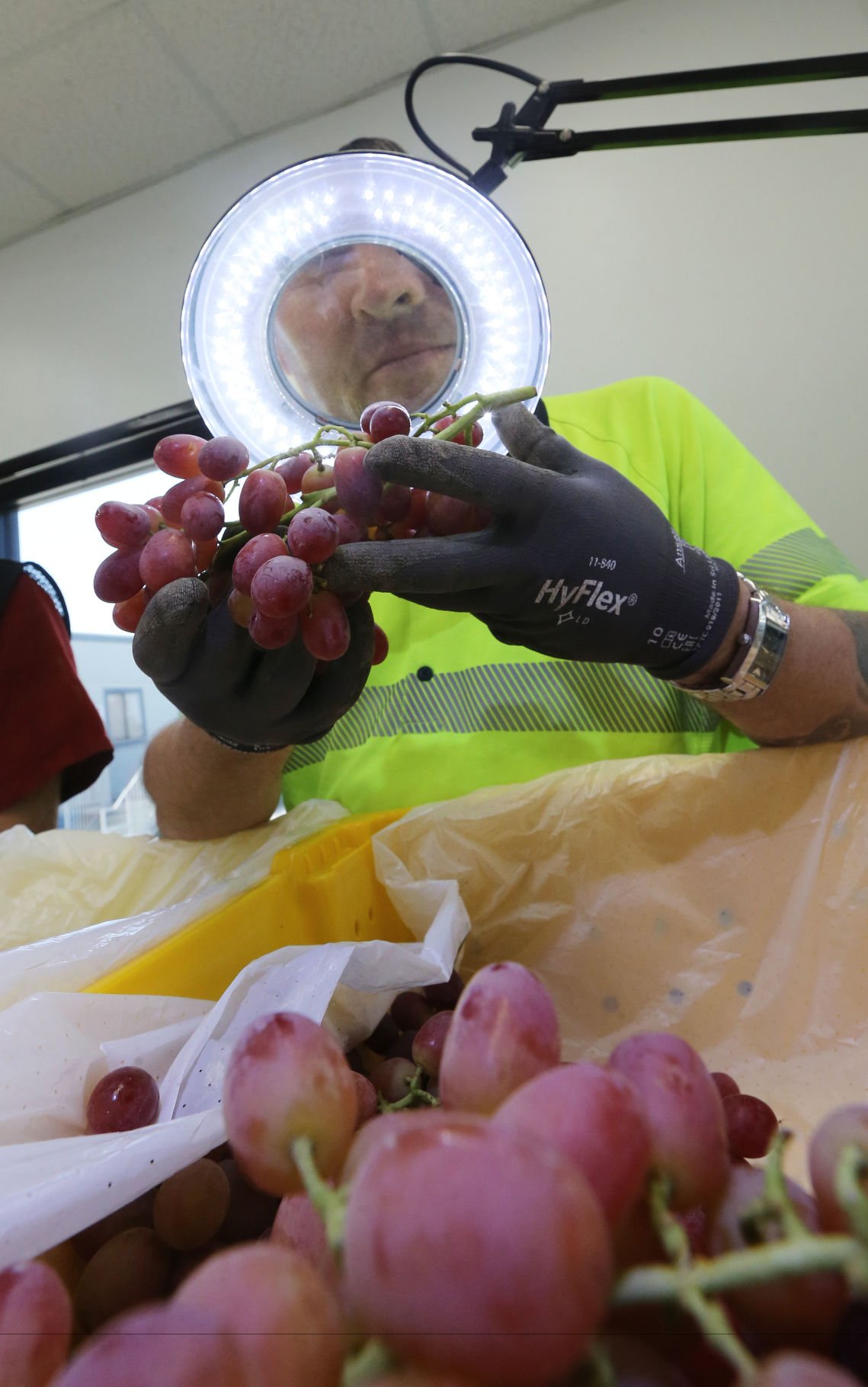 In this September 2018 file photo, a food inspector from Australia inspects a portion grapes from Grapeman Farms off Zerker Road before they are shipped to his country. 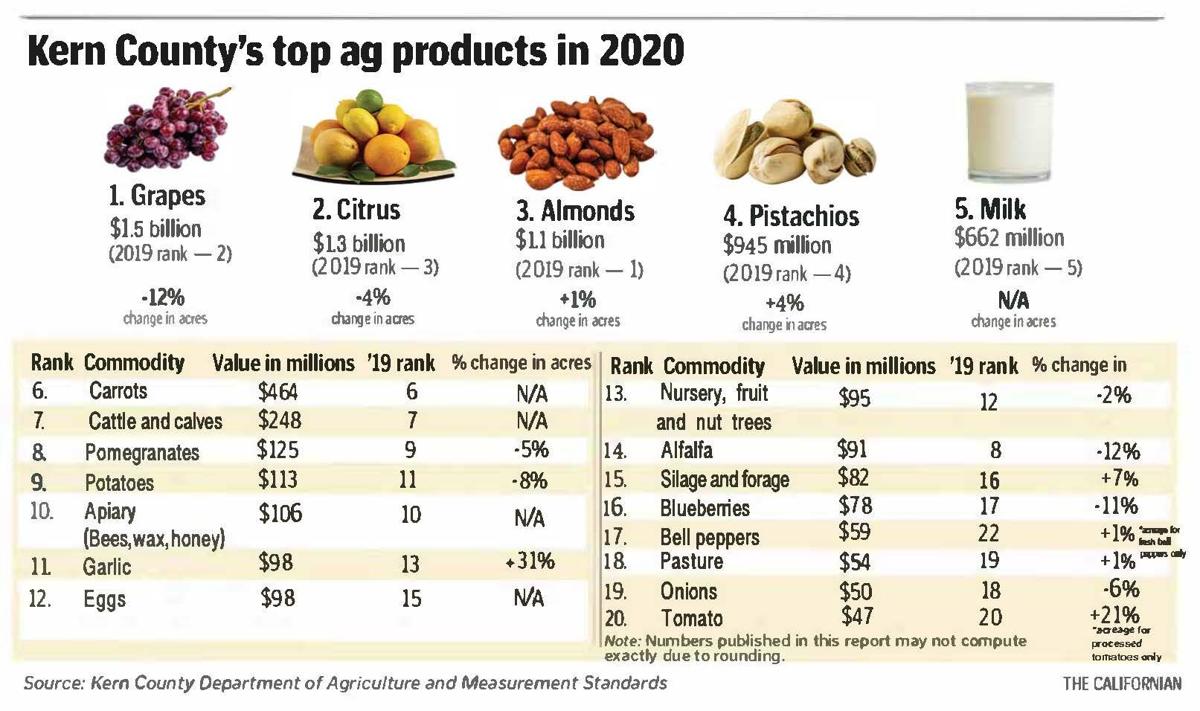 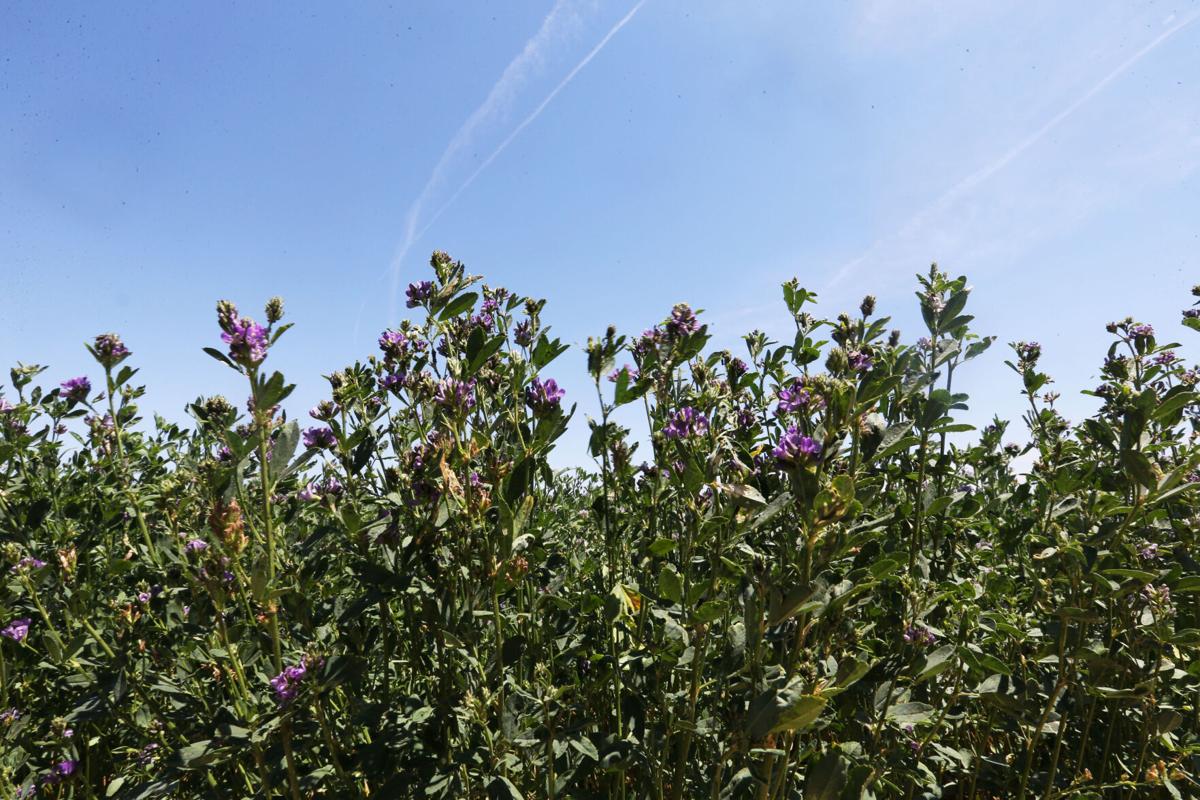 An alfalfa field off Di Giorgio Road near Lamont is ready to be harvested in this July file photo.

In this September 2018 file photo, a food inspector from Australia inspects a portion grapes from Grapeman Farms off Zerker Road before they are shipped to his country.

An alfalfa field off Di Giorgio Road near Lamont is ready to be harvested in this July file photo.

Grapes retook the top spot in gross value in the 2020 Kern County Crop Report’s Top 20 Commodities, published as part of Tuesday’s Board of Supervisors meeting.

Almond products, which claimed first place in the 2019 report, slid to third place behind grapes and citrus. Almond revenue declined by nearly $500 million in overall value in 2020, likely a result of depressed prices amid the pandemic despite constant harvested acreage numbers. The price of almonds fell from $2.45 per pound in 2019 to $1.83 in 2020, according to a report from the National Agricultural Statistics Service.

Meanwhile, the grape category, including table and wine grapes, raisins and more, produced about $1.5 billion in value for Kern County in 2020 to move back into first place, where it had been in 2018. While bearing acreage for grapes was down 12 percent, there was a slight uptick in production per acre and overall grape prices, keeping value virtually constant year over year.

“In the table grape industry, there has been a renewal of vineyards,” said Kathleen Nave, president of the California Table Grape Commission.

Total gross value was up 1 percent from 2019. Pistachios and milk rounded out the top five crops, maintaining their 2019 spots. Further down the list, there was more movement. Alfalfa, ranked No. 6 as recently as 2008, dropped to No. 14, its lowest position in at least 30 years.

“Alfalfa used to be the No. 1 acreage crop in California,” said Dan Putnam, an agronomist at UC Davis, “and that is no longer the case.”

Putnam said the decline of alfalfa, especially pronounced in the Central Valley, results from an increased preference for permanent crops over annual crops as well as the rapid expansion of orchards, particularly for almonds. Almond and alfalfa acreages have been inversely proportional over the years, with the two nearly equivalent a decade ago but almonds now over four times more widespread.

The decline has come even as milk and cattle, which Putnam noted are two commodities closely linked to alfalfa, have maintained high positions on annual crop reports.

One conspicuous absence from the 2020 report is industrial hemp, which made a surprising debut at No. 14 in last year’s rankings with $81 million in gross value amid the rise of cannabidiol, or CBD, products.

Jonathan Mills, project manager for Delano-based ECO Hemp of California, said that after an initial influx of venture capital money, a lot of unreliable external companies entered the market. Many have now become defunct. In the meantime, he added, prices have dropped from about $3.76 per percentage point of CBD per pound to less than 30 cents.

In addition, producers can hold onto hemp extract products for a long time, “like, say, baseball cards,” Mills said, waiting for their value to increase, meaning they are not obligated to sell when the price is low. In the 2020 report, hemp was grouped into a “miscellaneous” category with a value of just $34 million in revenue.

“I know many growers in the area that are sitting on a lot of material that’s two, three years old,” he said.

Acreage for hemp alone can’t be parsed out from the “miscellaneous” category, but Mills suggested that it may also have declined due to a Kern County regulation from February 2020 placing stricter permit requirements on land dedicated to hemp production.

Mills said that despite pending regulatory issues with the Food and Drug Administration, he is optimistic about hemp.

“I just don’t think that hemp in California is dead,” he said. “I see a future in it.”

Almonds finally overtook grapes as Kern County's most valuable crop, according to a new report that contained a few surprises pointing to fund…