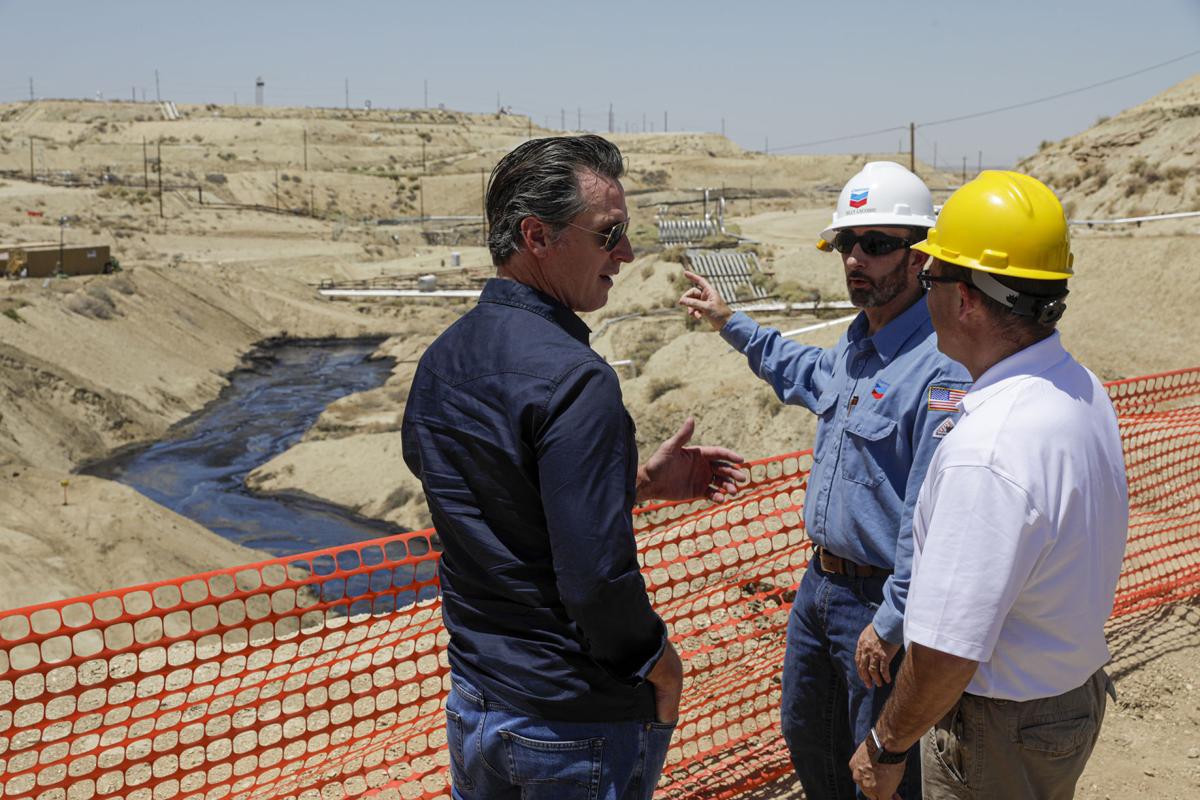 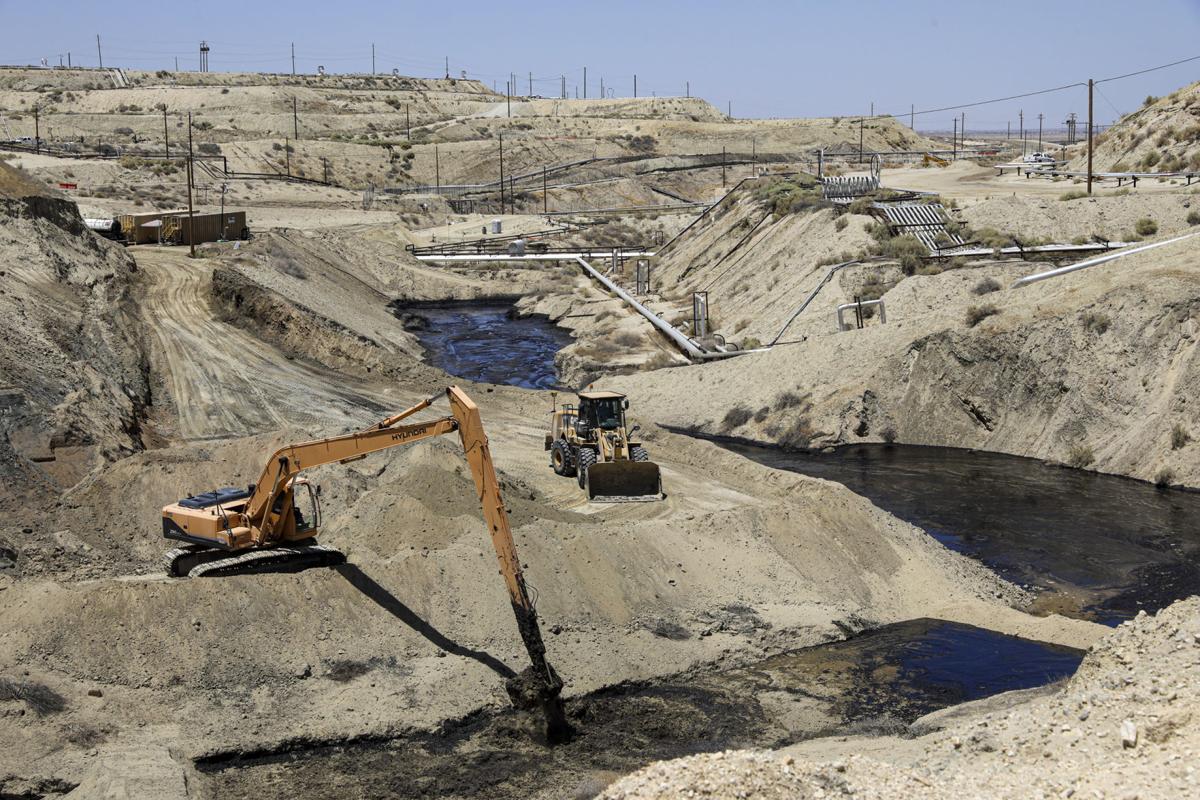 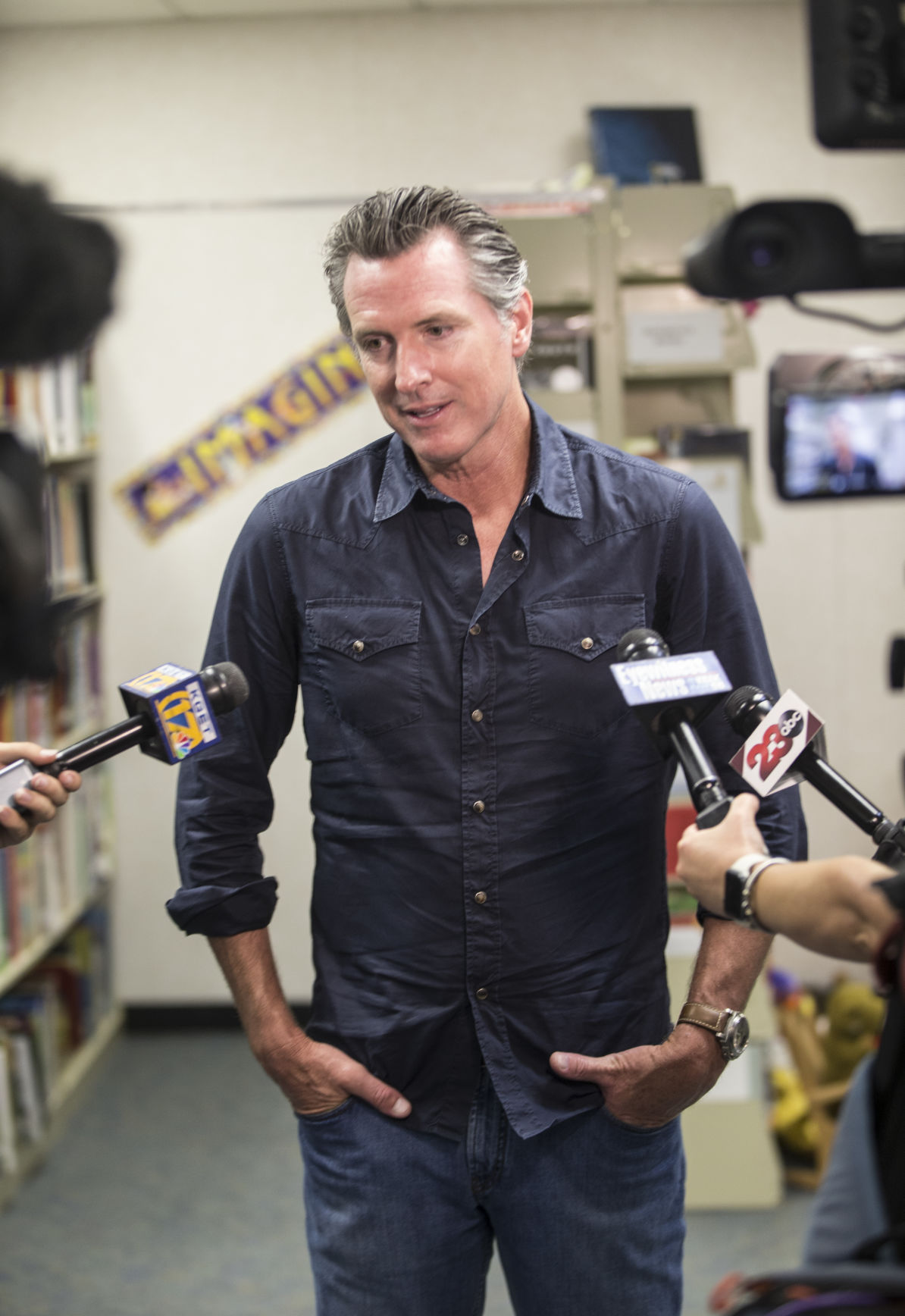 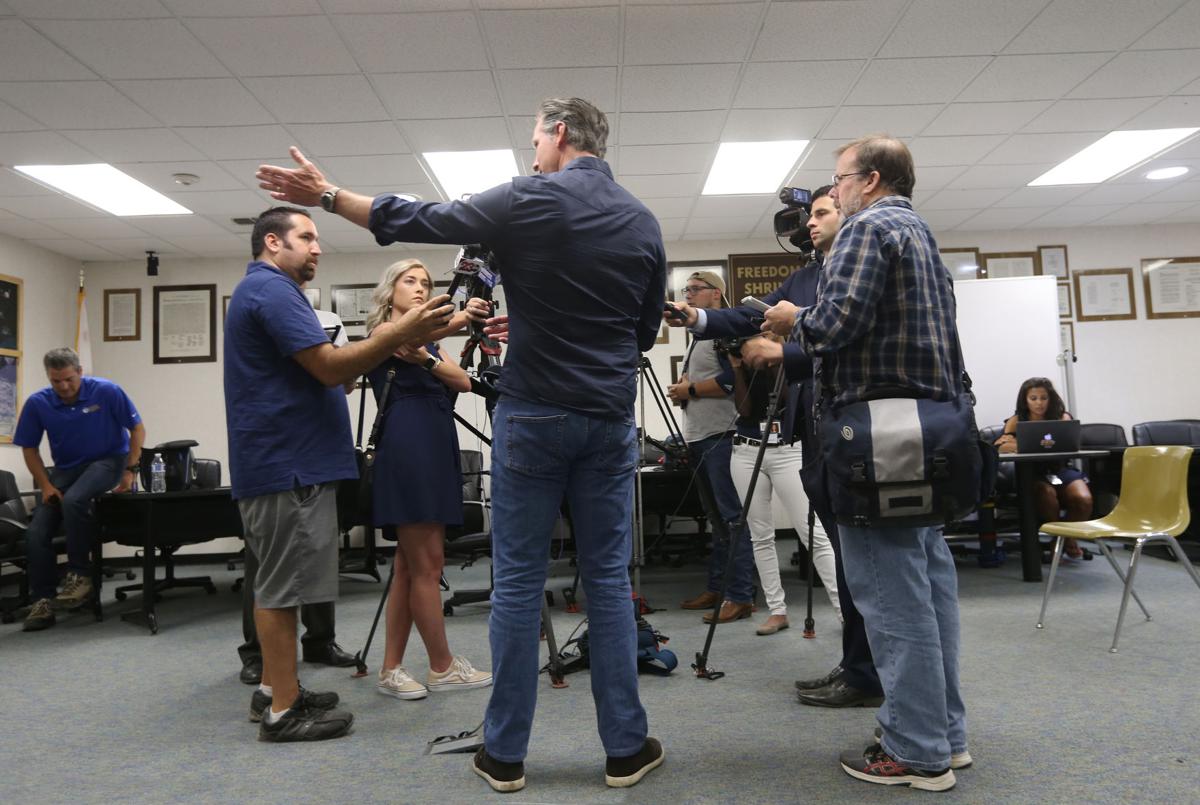 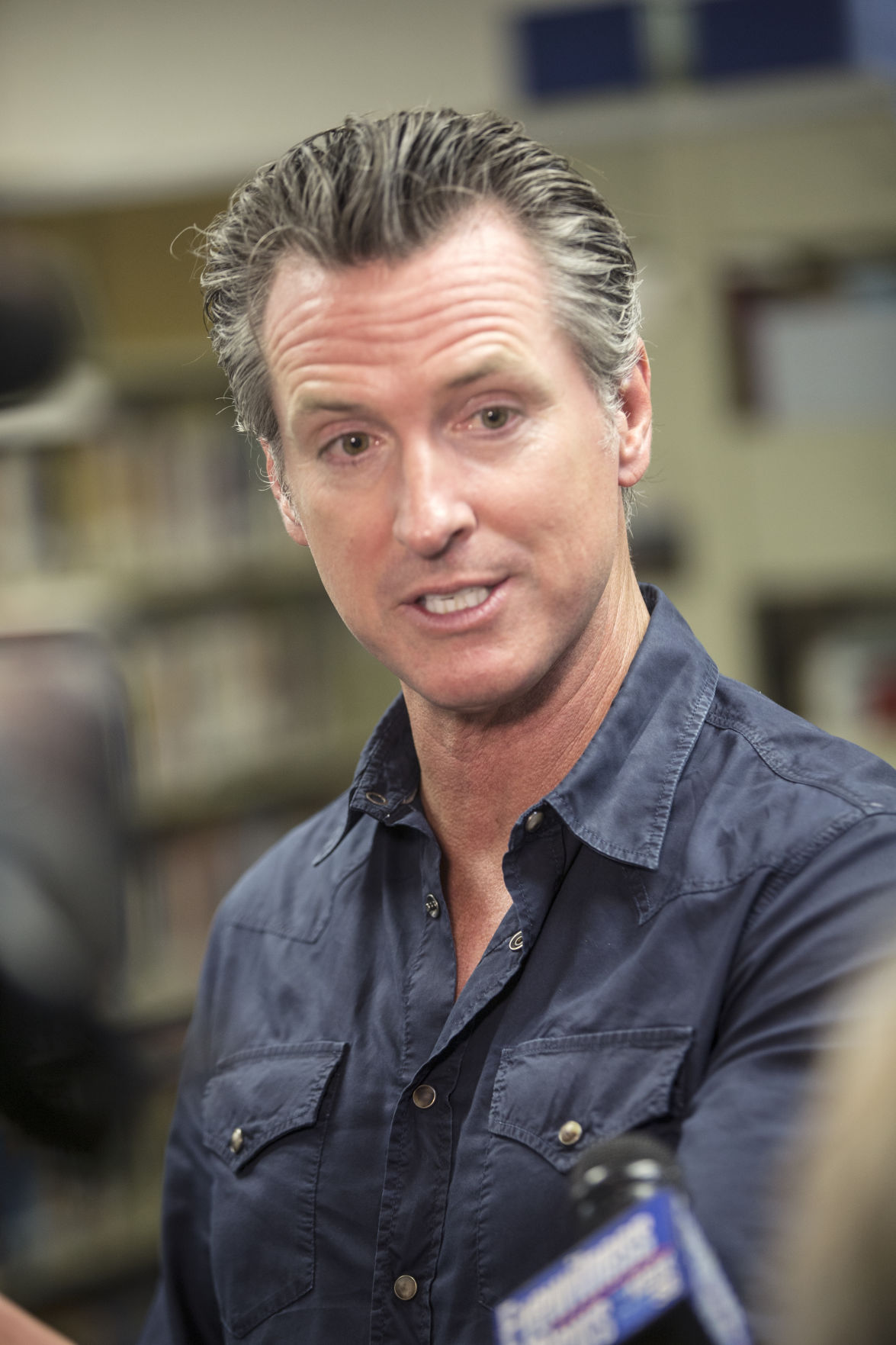 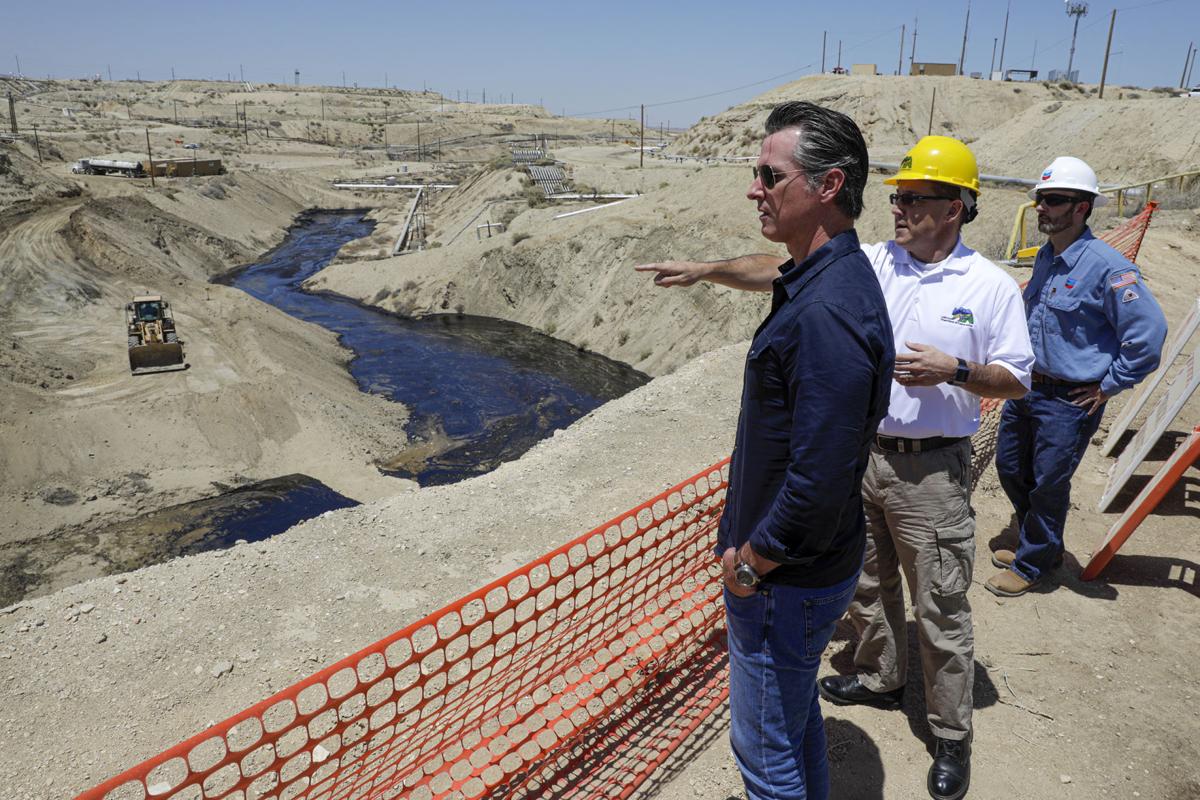 Gov. Gavin Newsom, left, is briefed by Chevron's Billy Lacobie, right, and Jason Marshall of the California Division of Oil, Gas and Geothermal Resources during a recent tour of the Cymric Oil Field, where a spill has released about 1.3 million gallons of fluid into a dry creek bed outside McKittrick. Since that tour, separate leaks nearby have prompted DOGGR to issue two notices of violation against Chevron.

Gov. Gavin Newsom, left, is briefed by Chevron's Billy Lacobie, right, and Jason Marshall of the California Division of Oil, Gas and Geothermal Resources during a recent tour of the Cymric Oil Field, where a spill has released about 1.3 million gallons of fluid into a dry creek bed outside McKittrick. Since that tour, separate leaks nearby have prompted DOGGR to issue two notices of violation against Chevron.

Gov. Gavin Newsom, speaking with reporters in western Kern after a tour of California's largest oil spill in years, withheld judgment on the incident Wednesday and said he must balance the state's low-carbon future with the needs of communities economically dependent on petroleum production.

Newsom's comments suggest he may try to steer a middle course, as his predecessor Jerry Brown did, even as he pushes California toward a low-carbon energy future.

The governor said he was encouraged to see Chevron is making progress in cleaning up the leak of about 900,000 gallons of black fluid, about a third of it oil, that has come to the surface intermittently near McKittrick since mid-May.

There is no evidence the event caused lasting environmental damage, he said, but it did endanger the lives of people working in the surrounding Cymric Oil Field.

Newsom said he would wait to hear what state officials determine to be the incident's cause. He pointed out industry leaders have descended upon the site to learn how they might work to avoid such accidents in the future.

Taking a line from oil industry defenders, the governor told reporters he drove to the site and that he flies a lot, adding he must be "held to account to that reality." He also mentioned that oil production is an industry that helped build California.

He also made reference to what he called a vigorous debate in Sacramento over how to regulate, or possibly ban, oil field techniques that environmental activists deem extreme and potentially damaging. He promised to continue to try to wean California off petroleum-based fuel but said it must be done responsibly, with "respect as well" for communities whose economies rely on oil.

"I want to begin that transition (away from petroleum) and I want to do it thoughtfully," he said.

The governor has taken recent steps that could be read as concessions to the state's increasingly anti-oil environmental lobby, such as the removal of California's top oil regulator earlier this month over apparent conflicts of interest among agency supervisors. Newsom has also budgeted $1.5 million in taxpayer money to study ways of reducing the state's oil supply and demand for it.

Chevron has preliminarily concluded the leak was caused by a broken well it was "re-abandoning," or resealing, when oil and water started to flow onto the ground in what the industry calls a "surface expression."

Surface expressions are not allowed in California, though they have happened many times in the history of Kern oil production.

San Ramon-based Chevron insists steam was not a factor in the leak. But as The Californian reported Sunday, observers reading from Chevron's own records say the company should not have been injecting steam at high pressure at the same time it had opened and was working on another well nearby.

California's acting oil and gas supervisor, Jason Marshall, expressed doubt Wednesday about Chevron's explanation. Although the company continues to gather and turn over a wealth of data about the leak, he said it "looks to me" like steam contributed to the problem. He emphasized he is not an engineer.

The agency Marshall oversees, the Division of Oil, Gas and Geothermal Resources, has issued Chevron two notices of violation relating to the leak. It has also ordered the company to do everything possible to keep it from resuming its flow. Among the measures intended to accomplish that is a ban on injecting steam within a 1,200-foot radius of the leak.

Gavin is a fruit cake.... (are you going to take this down again?)

Given California's regulatory environment and declining oil production which dates to the 1980s, I wouldn't be surprised if Chevron has already curtailed or suspended all exploration activities in California. They have other places to invest which may be more profitable, and certainly less challenging from a regulatory perspective.

Newsom is a joke. He is a Socialist. Plain and simple. He will really hurt CA more. Look at how bad CA is. All because of idiot Governors. 53,000 homeless in LA, homeless in Bakersfield, here where I live. San Fran Nanny. San Diego. Orange County. All cities and it isn't getting any better. Be an illegal and you get all that you need a fast. Be a homeless and they turn their heads. Now he won't be judgmental on a oil spill. Acting like he cares. He doesn't. He don't care at all. Look at who he is related too. Pelosi. The worst of the worst. Our state is in deep trouble.

Why not just reduce pollution? Killing an affordable source of energy, products and everything in between is ludicrous.

Oil is pollution...you are the ultimate propogandist....btw did you sell your overpriced home in the sticks?

Newsom sounded like Obama talking to the coal industry. I remember but well/ . California got itself stuck with a radical leftist, environmentally addled state government. They never see a stupid, poorly analyzed regulation they could pass up. The oil industry is a major target. Yes, energy development is at best a messy business. Wind power creates maddening noises while slicing and dicing birds by the thousands. Solar covers acres and acres of panels that destroy natural habitat and need to be kept clean while not knowing how to dispose of spent panels with their hazardous materials. Both have major limitations of nature, the wind stops blowing, the sun goes down. Back up batteries also contain materials environmentalists are terrified of. These are great technological developments, but with massive limitations. Nuclear power. Our Navy has had crews sleeping next to hundreds of reactors for decades. It still has solvable disposal problems. US military reactor development has created a long term, uniform source of enough energy to charge all those demanded electric vehicles while providing enough waste heat to desalt sea water all day long for human consumption. But back to our oil industry. Fuel and lubricants, heating and cooling, food preservation, paving and roofing. Streets all over town are being resurfaced with the most economical asphalt that is based on sand, gravel and Kern County crude oil. You can drive by 99 and Lerdo Highway and view a major plant that makes roofing and building materials for the nation. Why is it there? Kern County crude. Do a search and learn that over 21,000 products from plastics to pharmaceuticals to cosmetics to fertilizers to lubricants to sealants to myriad components in end products we use every day.

Hereby recommend Jerry Todd for the CA Oil & Gas position. Why in the planet would Newsom appoint an administrator that reinforces “I am not an engineer.” Thank you Mr. Todd for your insight!

Remember Obama's Cabinet contained not one experienced businessman or woman. All "community rabble rousers" of one kind or another. No wonder they are grossly incapable of understanding how a businessman/woman who knows his/her stuff can get things done. And here I've been pushing water treatment, transport, storage and stewardship, and you want me to run oil and gas? Ask the farmers how much they're ignored regarding water and diesel "pollution." You reminded me of a statement I made 20 years ago to the yawns of many: "Water, Energy and Environment are inextricably tied together." The only way to make the combination is via capitalism and free enterprise where actual challenges are met and resolved - profitably for all concerned.

Nat gas has 2 years left then its finished, wont' be used for utility energy generation and the phase out of nat gas pollution buses...then starting in 2023 oil demand starts fading.... yes, you are correct oil and nat gas are where coal was in 2013...now 98% of coal companies from 2013 are bankrupt...bye oil compaines thanks for playing, lmfao!!!

Are you really Algore? I’d hide behind a fake name too.

Yes, I invented the internet