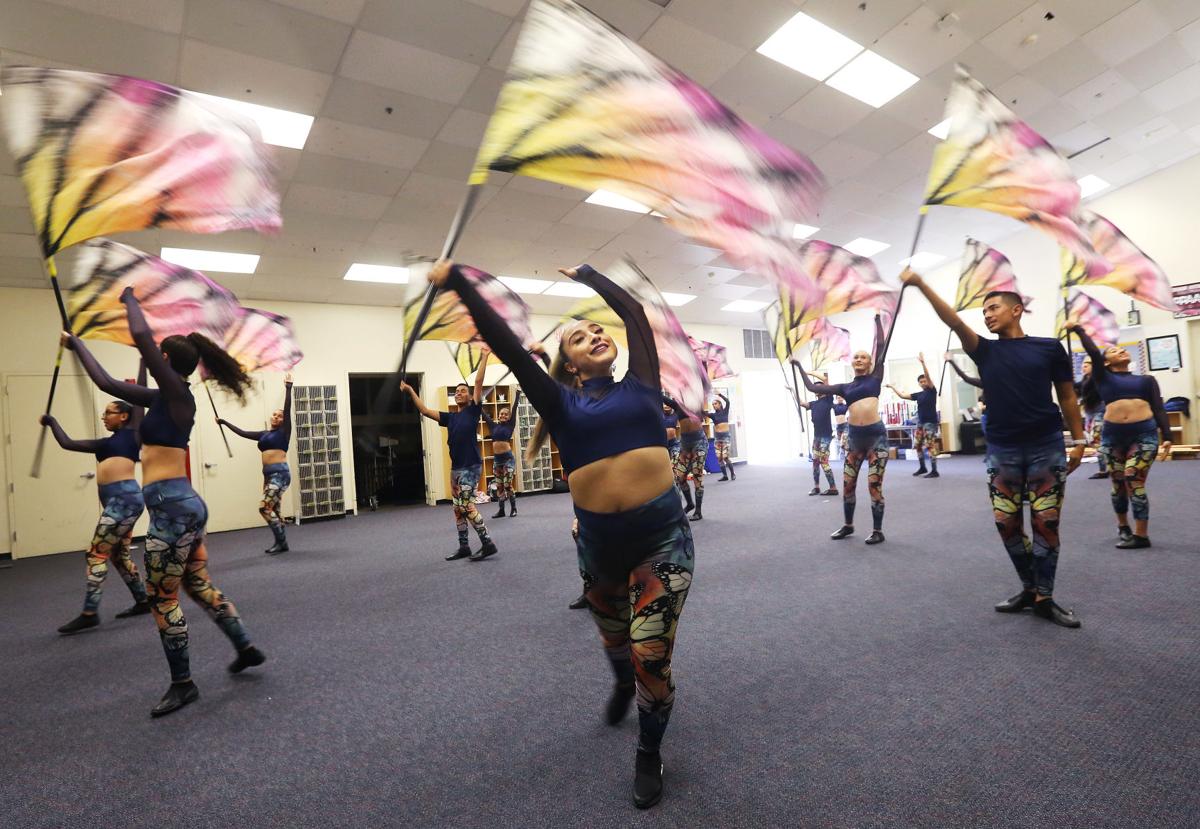 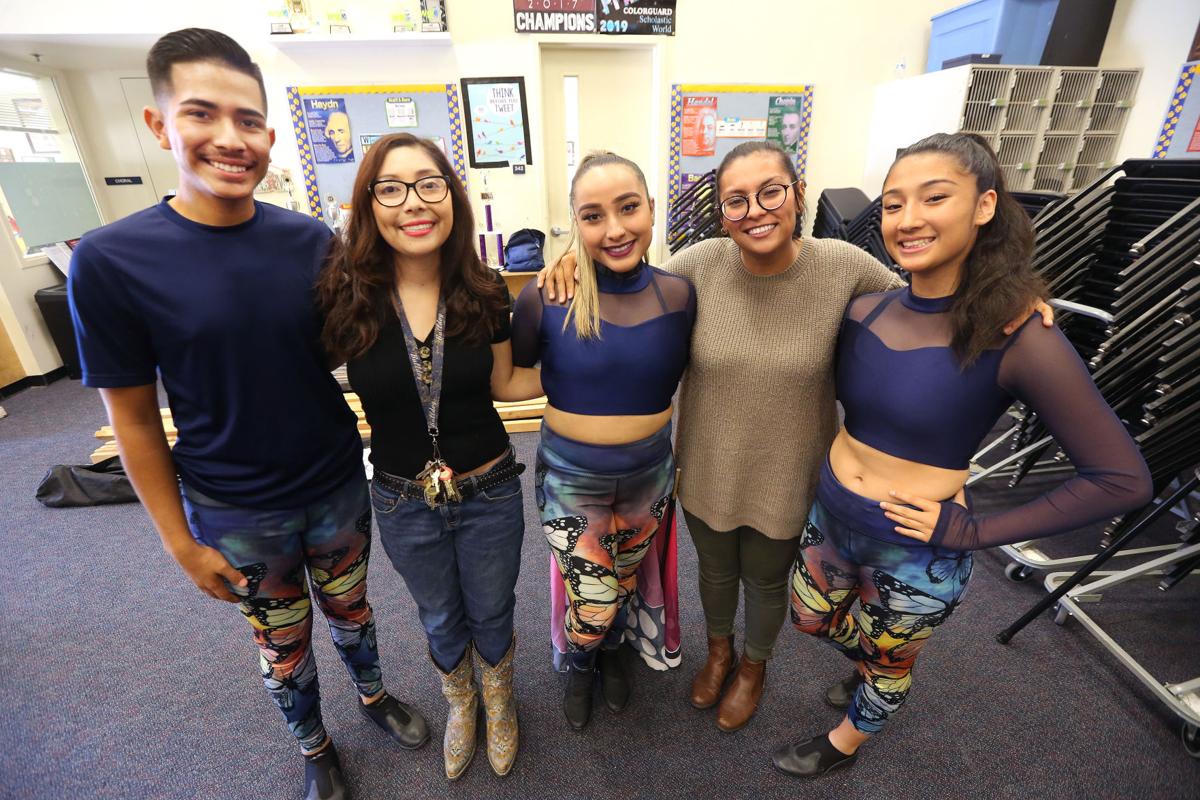 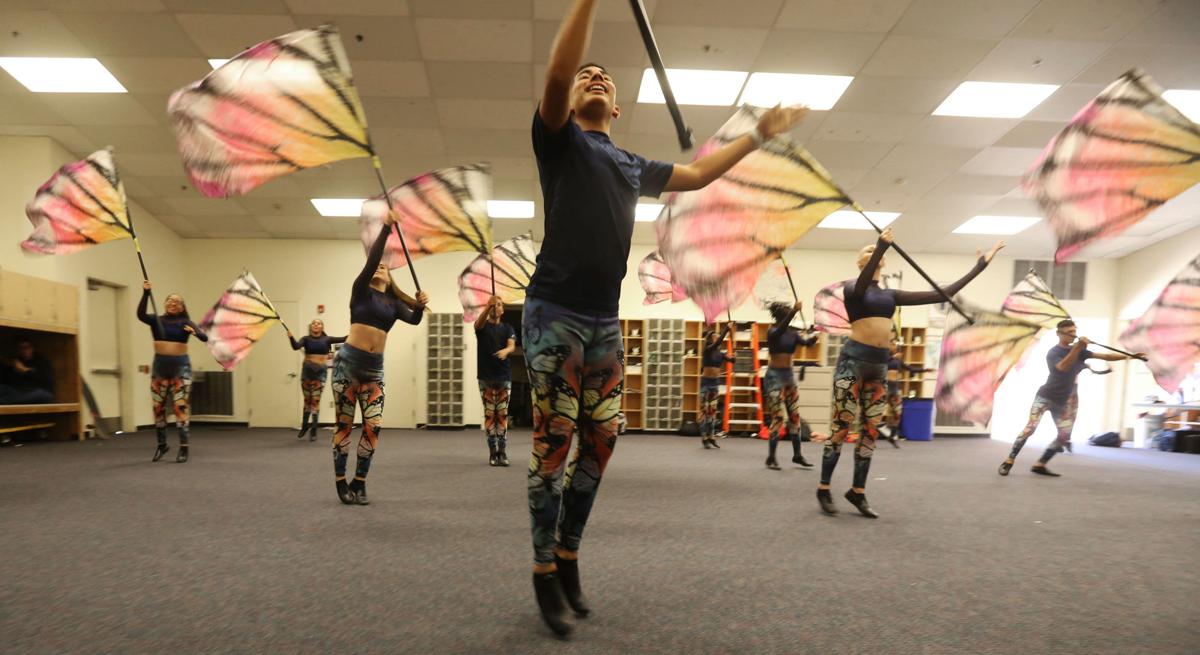 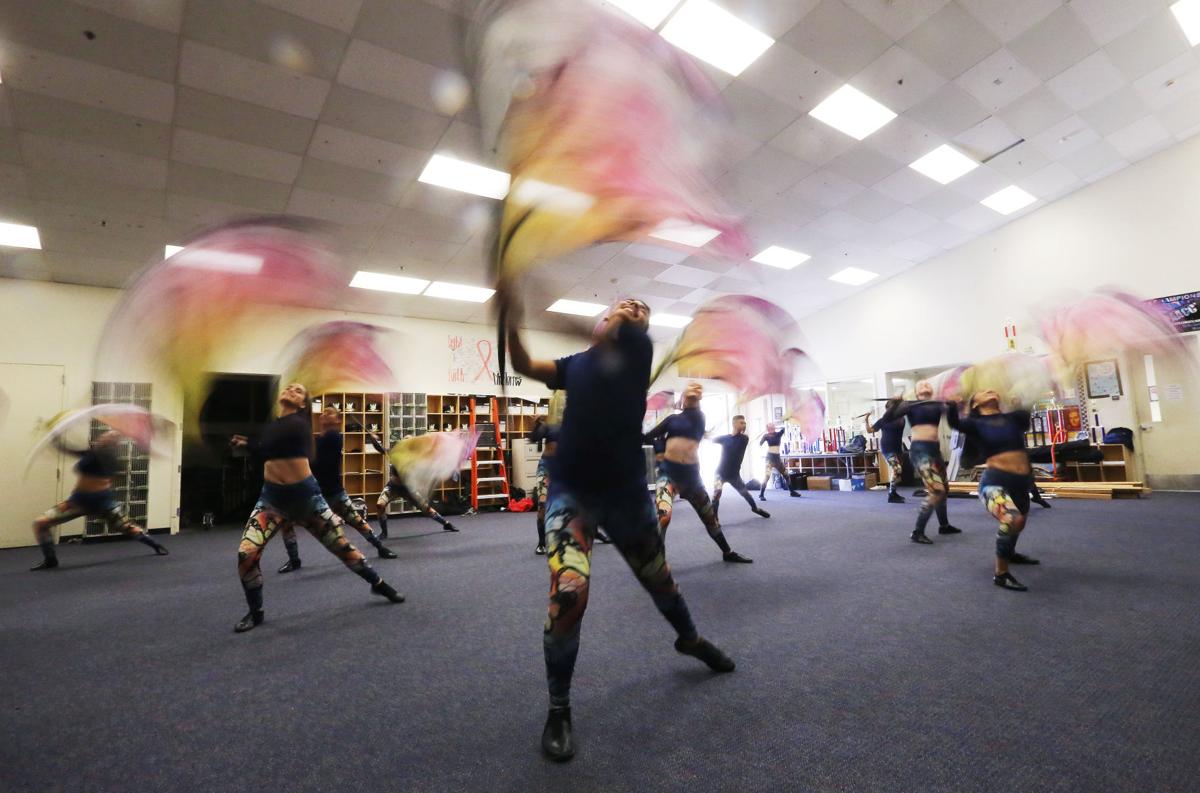 Color guard captain Gilbert Alvarado, leads the team during practice Thursday afternoon. The group is performing "Journey of Life," which shows how a caterpillar becomes a butterfly. 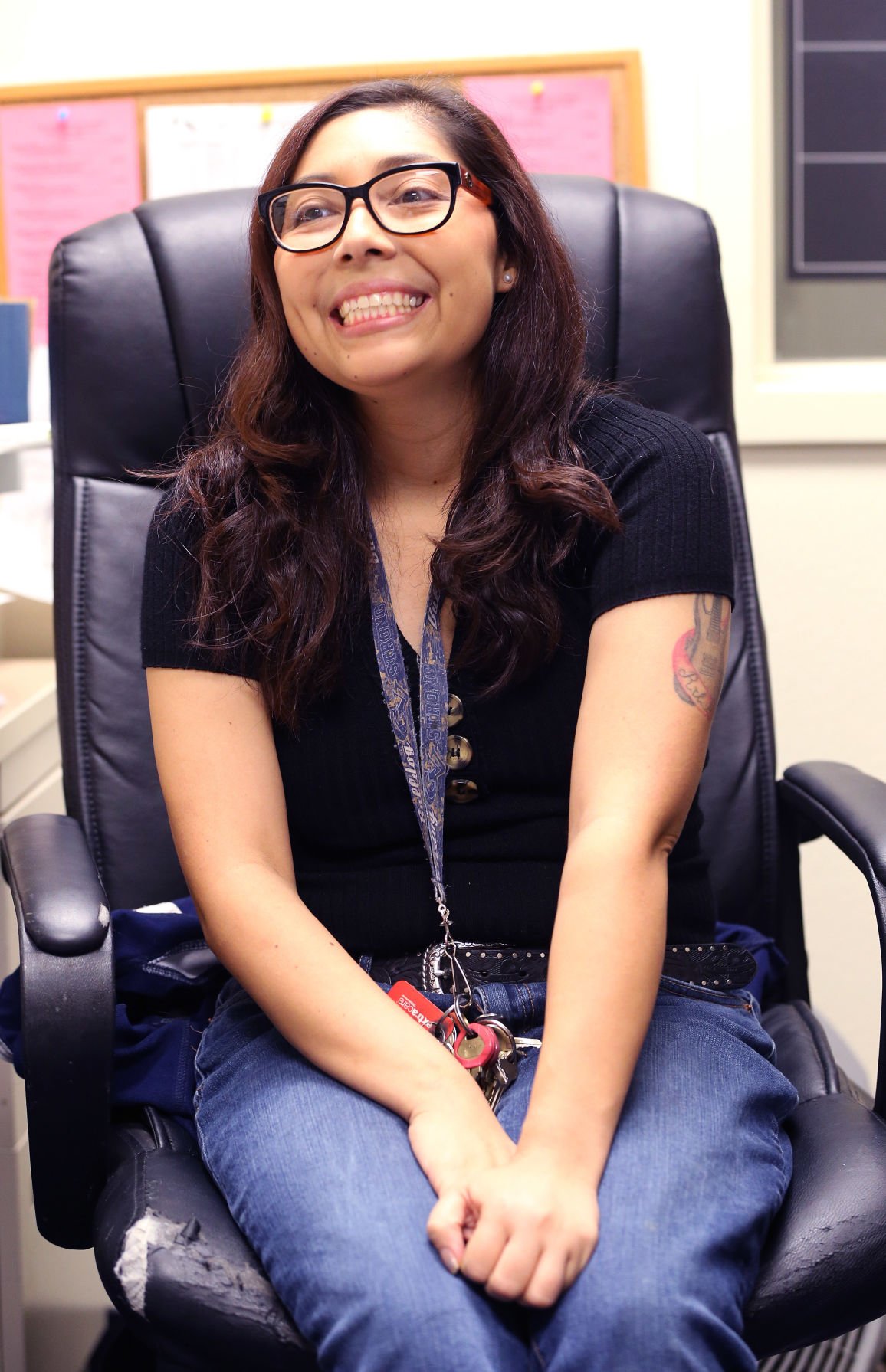 Band Director Kristen Torres is all smiles when talking about students' success. 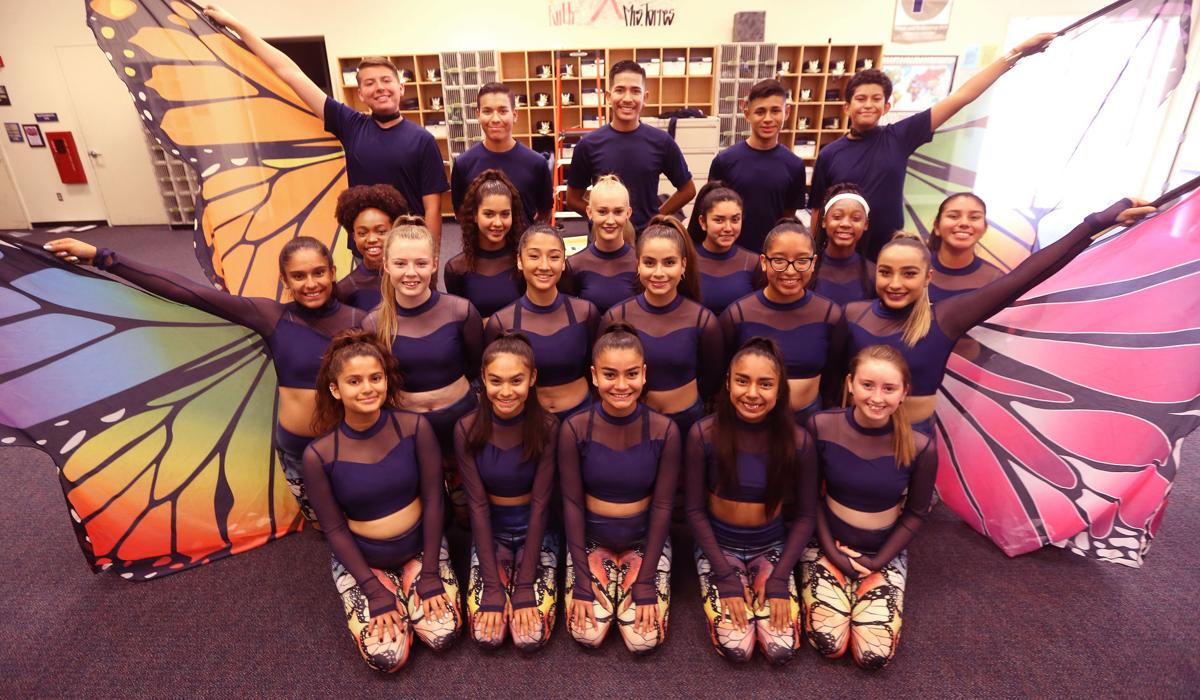 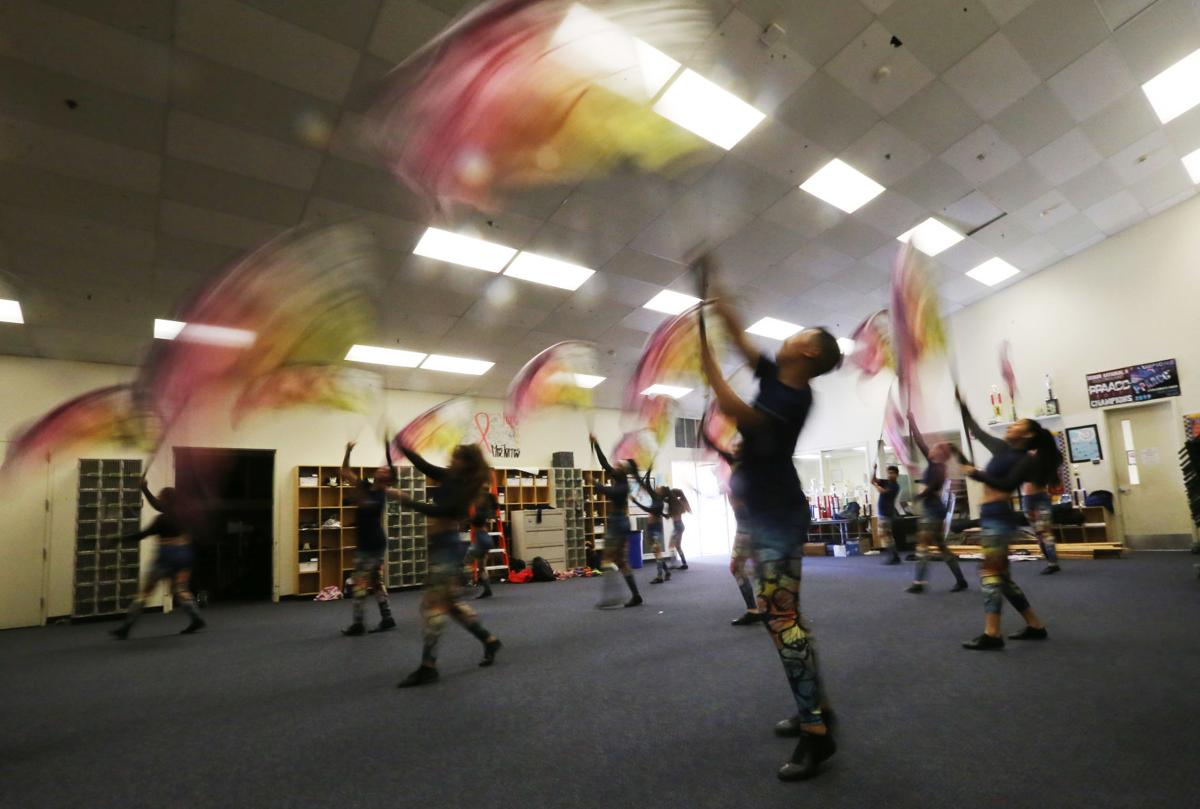 Color guard captain Gilbert Alvarado, leads the team during practice Thursday afternoon. The group is performing "Journey of Life," which shows how a caterpillar becomes a butterfly.

Band Director Kristen Torres is all smiles when talking about students' success.

Tucked away in one of Golden Valley High School's buildings is a butterfly waiting to spread its wings to the world.

Most in Bakersfield know what it is capable of, and it has even been awarded for its beauty and grace, but now the time has come for it to fly and show others its talents.

The same could be said about the Golden Valley High School Color Guard. Last spring, the group received the title of Scholastic World champions locally. This fall season, Golden Valley has gone undefeated in various competitions, and even received the highest score for three consecutive weeks, making it the highest ranking color guard in town, according to director Nancy Cisneros.

The team's performance, "Journey of Life," shows how a caterpillar becomes a butterfly. Performers twirl and throw butterfly-printed flags in the air, and some students even have wings of their own they get to spread out.

The group started off small, but is now competing at the highest level a high school group can compete in: Scholastic World.

"They just have this love for the activity," Cisneros said of this year's 22-member group. "Students come and go, but the dedication and love for color guard is translated from senior class to senior class."

The students themselves find color guard to be an opportunity like no other on campus.

"For football games when I would see the pop of colors and time and effort they put into that, I was like, 'Wow, I want to be a part of that, I want to do that,'" said Serenity Arias, one of the team's captains.

Because the group is performing at the highest level, one goal it has for itself is to attend the WGI World Championships held in Dayton, Ohio. The competition is scheduled for April 1 to 4, 2020.

Their skills could get them there, but finances are another issue.

Three-fourth of students come from low-income households at Golden Valley High School. Last year the team fundraised year-round, but was not able to meet the total amount necessary to purchase flights and hotel accommodations.

"You have to know immediately at the beginning of the school year, and we kind of told the kids, 'Look, if you want to do this, you have to have this much money in by November or December,'" explained band director Kristen Torres. "They weren’t on top of that number, and later on they wanted to go because they started getting first place and we had to explain to them ... if it doesn’t happen by a certain time, there’s nothing we can really do."

Since experiencing the disappointment of not going to Ohio last year, it has ignited a fire in each of them. They're on a mission to reach their $25,000 goal, and so far they have raised between $6,000 to $7,000 thanks to fundraisers, sponsorships and donations from local businesses. Torres said Principal Paul Helman has also been an avid supporter of the program.

They have even set up a GoFundMe account, which can be viewed at https://www.gofundme.com/f/gvhsworldchampionships2020

"We’ve been working for this for around two years already. If we would get the opportunity to go it would be a life-lasting experience," said Gilbert Alvarado, another team captain. "It would be our first time, and this team is so young that it would have such an impact not just on us but on our community to show what we got and all the hard work we have put in."

It hasn't been the easiest task to take on for members who live in a community where many people just don't have enough money to donate, sophomore Itzel Delgadillo explained. Some companies also might not feel comfortable donating hundreds of dollars to teenagers, not knowing where the money might actually be going, she added.

But they're not giving up on spreading their wings and accomplishing their dreams.

"Now we all have a little bit more hope. We had hope before, but now we’re all putting our part into this and getting out there, getting sponsors, selling all we have to sell and going over our limits just to bring in money because we really want this opportunity," explained captain Maria Cervantes. "It’s going to mean more for us because we’re friends in high school, and not a lot of people get to do that."