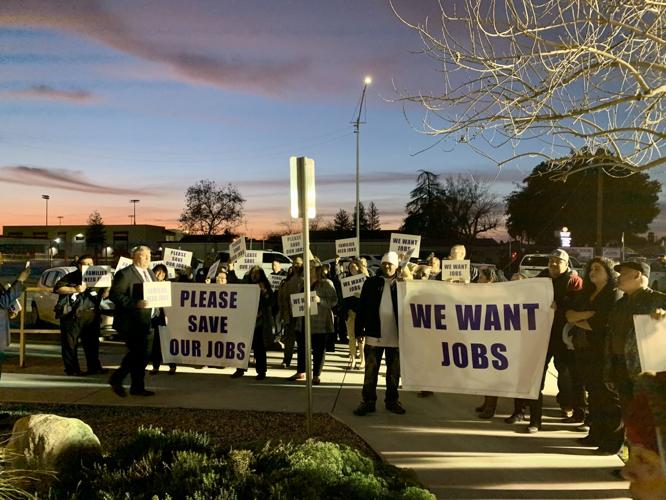 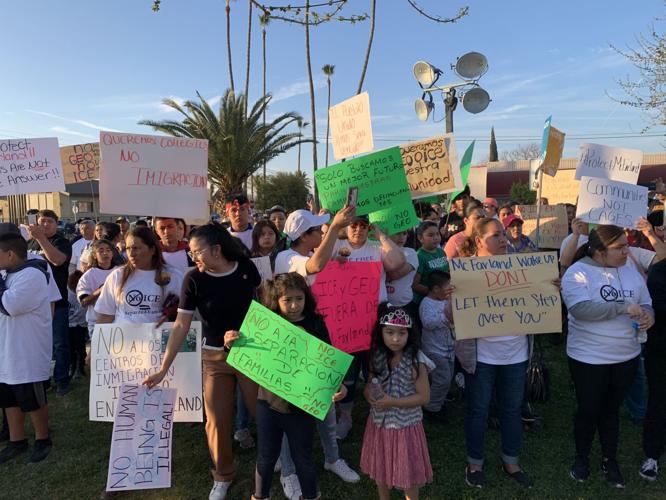 Protesters gather outside a McFarland Planning Commission meeting Tuesday in opposition to a plan to expand immigration detention capabilities in the city.

Protesters gather outside a McFarland Planning Commission meeting Tuesday in opposition to a plan to expand immigration detention capabilities in the city.

A private prison company has indicated it plans to appeal a decision by the McFarland Planning Commission to reject permit applications that would have allowed two state prisons to be converted into immigrant detention centers.

GEO Group Inc., which operates the Mesa Verde ICE Processing Center in Bakersfield, had planned to turn the Golden State Modified Community Correctional Facility and the Central Valley Modified Community Correctional Facility into annexes of its Bakersfield location. However, those plans were at least temporarily thwarted on Tuesday during a Planning Commission meeting.

Two 2-2 votes that would have changed the facilities’ conditional use permits to allow for the incarceration of federal immigration detainees failed to find a majority. If the votes had passed, the commission would have forwarded their recommendations on to the McFarland City Council for final approval.

But by rejecting the proposals, the Planning Commission has stalled GEO’s plans, at least for the moment. The company can still appeal the decision to the City Council itself, which a company spokesman signified GEO intends to do.

“GEO is proud to be a long standing member of the McFarland community, and we are hopeful to be able to continue to contribute to the City’s growth by keeping over 300 high paying jobs in the area,” the company said in a statement.

If GEO does bring the matter before the council, it can expect another protracted fight. Hundreds of protestors showed up to Tuesday’s meeting to demonstrate against immigrant detention in McFarland.

Faith in the Valley Community Organizer Alex Gonzalez, who was in McFarland on Tuesday, said McFarland residents would be ready to push back against GEO if called upon to do so again.

U.S. Immigration and Customs Enforcement, which lies at the center of the controversy, did not respond to requests for comment on Wednesday.

ICE has signed multiple contracts with GEO and private prison company, CoreCivic, worth $6.8 billion to house detainees in California. The two McFarland facilities, which contain 700 beds each, appeared to be vital parts of the agency’s plans.

GEO portrayed its presence in McFarland as vital to the community’s success. The company claimed on Tuesday McFarland would lose $1.5 million in utility fees, and property taxes would drop by $500,000 if two facilities were not allowed to operate.

Mayor Manuel Cantu Jr. submitted his letter of resignation on Wednesday as a response to the Planning Commission’s vote. He painted a stark view of the city if GEO leaves.

“We could be filing bankruptcy within a year,” he said. “As it is, we’re about half a million dollars in the red, so this will put us about a million and a half in the red.”

But even if GEO did stay, the city may have lost valuable taxpayers.

Several people who claimed to be McFarland residents said during the commission meeting they would leave the city if ICE were allowed to open two facilities. However, others spoke of the loss of jobs the city would experience should both facilities close.

Immigrant rights activists see the McFarland decision as a potential bellwether for a future without private prisons in the state. They appear ready to fight any effort by GEO to open new ICE facilities.

Recent changes to state law have made it more difficult for ICE to operate in the state. Even if the Planning Commission did approve the permits, lawsuits would likely challenge GEO in court.

“Last night’s victory is a sign that the tide is shifting,” Christina Fialho, co-executive director of Freedom for Immigrants said in an email. “We can abolish immigration detention and make private prisons a thing of the past.”

After nine years, McFarland Mayor Manuel Cantu Jr. has submitted his letter of resignation, saying he does not think he can help lead the city…