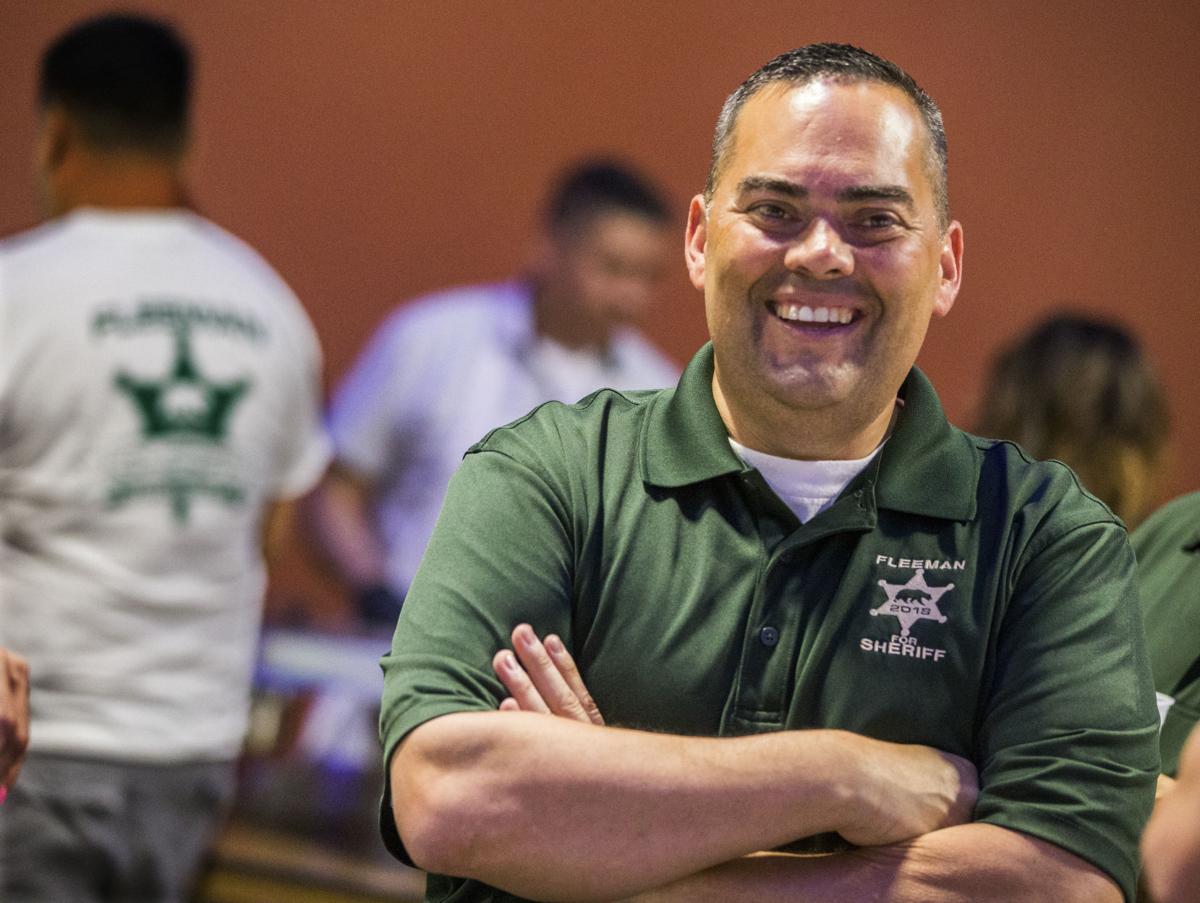 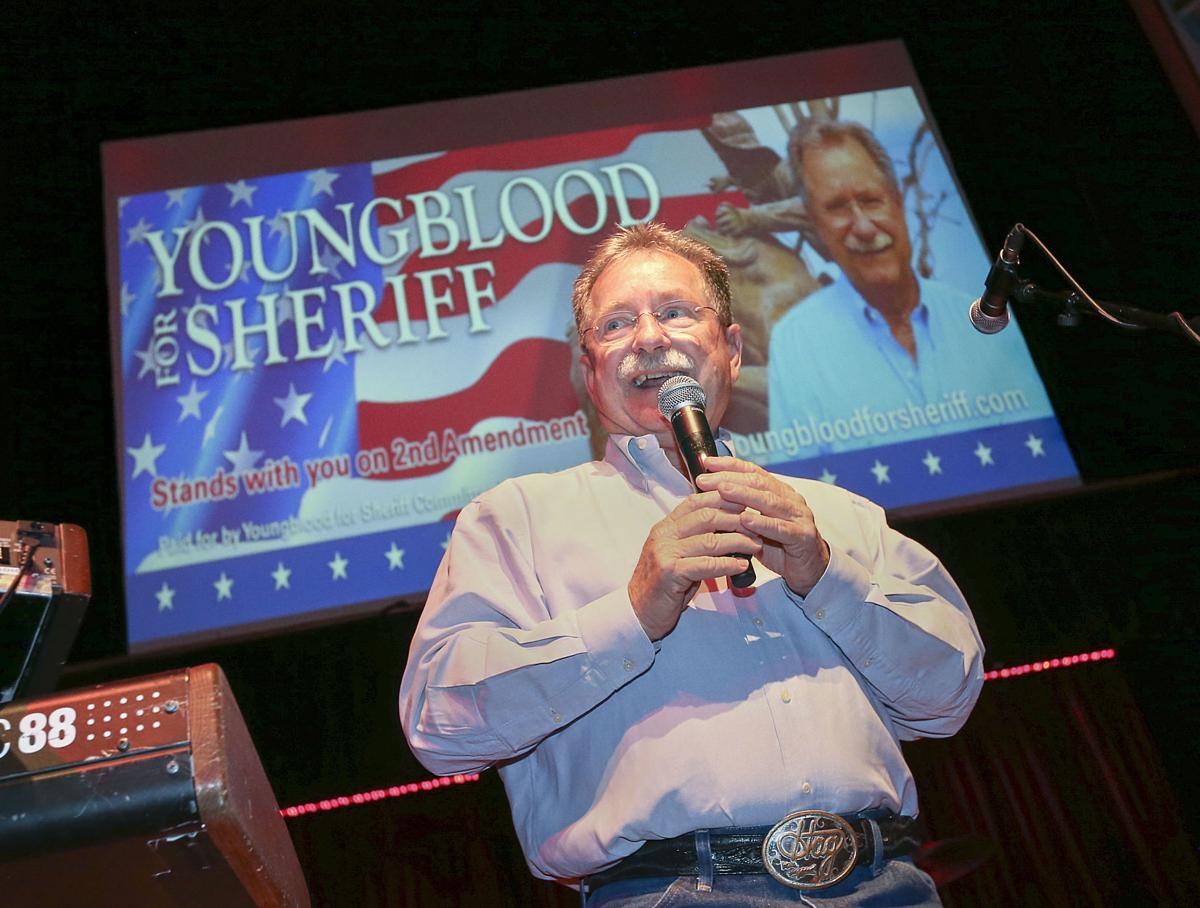 After the polls close but before results come in, Kern County Sheriff Donny Youngblood thanks his campaign staff and supporters as they gather at Buck Owens Crystal Palace.

After the polls close but before results come in, Kern County Sheriff Donny Youngblood thanks his campaign staff and supporters as they gather at Buck Owens Crystal Palace.

Justin Fleeman is planning to return to work for an organization that may not welcome him back with open arms.

Fleeman has spent months criticizing the Kern County Sheriff’s Office and its leader, Donny Youngblood, as part of his campaign for the sheriff's seat. After losing the race to Youngblood in Tuesday’s election, Chief Deputy Fleeman said he will be returning to the department on June 18.

“I’m going to go back to work just like I have been for many years,” he said. “The election’s done, the people have spoken. [Youngblood] is my sheriff, and I’m going to work as hard for him as I can.”

Sheriff Youngblood won the race with 67 percent of the vote compared to Fleeman’s 32 percent, according to the Kern County Elections Office. Fleeman said he was disappointed and surprised by the results but said he learned valuable lessons through the experience.

“I should have started my campaign earlier,” he said. “I tried to cram 18 months of campaigning into four months, and that was a mistake.”

Upon announcing his plan to run against his boss several months ago, Fleeman made several accusations against Youngblood including protecting his friends from firing for ethical violations and misallocating department funding to buy a helicopter.

Fleeman’s supporters within the Kern County Detention Officers Association also released a 12-year-old video during the campaign that showed Youngblood talking about how it is better financially for an officer to kill rather than injure a suspect.

Youngblood didn’t deny that the footage was real but said his comments were taken out of context. He also said that he should have made his point in a better way.

Youngblood criticized Fleeman for running what he believed to be a dirty campaign aimed at ruining his reputation and that of the Sheriff’s Office in order to win.

Fleeman said he’s not sure how he’ll be received by his co-workers when he comes back. He said he’s received calls from current employees with the department warning him that some employees have been talking about retaliation against him. However, he said he’s not too concerned.

“I’m not afraid of anybody,” he said. “I’m not going to let anybody treat me poorly. I will not shy away from any challenge, any fight. I’ll go back and take care of business just like I did before.”

Fleeman said he would consider legal action if worst comes to worst.

Youngblood said it’s too early to talk about what will happen when Fleeman returns.

“A lot of things have occured that I’m not happy with. I have to digest that and see where we go from here,” he said. “When he goes back to work, we’ll see where this leaves us and decide how we can move forward.”

Fleeman said he intends to cooperate with Youngblood in helping to improve the department.

“Hopefully we can work together more closely and discuss some of my ideas on how to make the department better,” he said. “[Youngblood] has the ability to be a great sheriff. I just hope he fulfills his promises, not just to the members of the public but the organization as well.”

Although Fleeman is aiming for a renewed congeniality between him and his boss, he said he won’t hesitate to be vocal if he hears or sees something happening in the department that he believes is wrong.

“I will not sit there and be silent,” he said. “If I see something wrong, I’m going to be the watchdog for the Sheriff’s Office. I’m going to make sure we’re fulfilling all our obligations and do my part to help the sheriff be successful.”

Although the campaign has been a taxing experience for both parties, Fleeman said he doesn’t regret running and bringing his concerns about Youngblood and the Sheriff’s Office to light.

“At the end of the day, I was honest. I did not tell one lie at all during this campaign,” he said. “I know what I did was right, and I did it for the right reasons. I can look myself in the mirror and respect the person looking back at me.”

It’s looking like Donny Youngblood will keep his job as Kern County’s sheriff for at least another term.

Glad he didn't win. Saw the two on the news. He didn't impress me. He seemed cocky. Glad Youngblood won.

The BOS was sold a bill of goods back in 2007 to purchase a helicopter that is rarely needed. Fleeman was right, get rid of it. True, you can only sell it once but...'bought and paid for'? Kern County taxpayers are buying that helicopter and airplane time and time again through maintenance costs, crashes, upgrades, training, personnel, etc., etc. Not so ridiculous...

Maybe I missed it...Who exactly was 'saved' by the KCSO helicopter doing something the KCFD helicopter was already doing at that time - and continues to do today - couldn't do?

Obviously
You obviously weren’t paying atrenting hill walker. In case you missed it, Youngblood was re-elect by the smart people of Kern County. Your dream of the sheriff’s Huey being sold just became your nightmare. Sucks to be you.

So Bodysnatcher...I guess from your "answer", I can infer that you have no answer to my question...

Whiny little man. Sounds like he wants to be a snitch