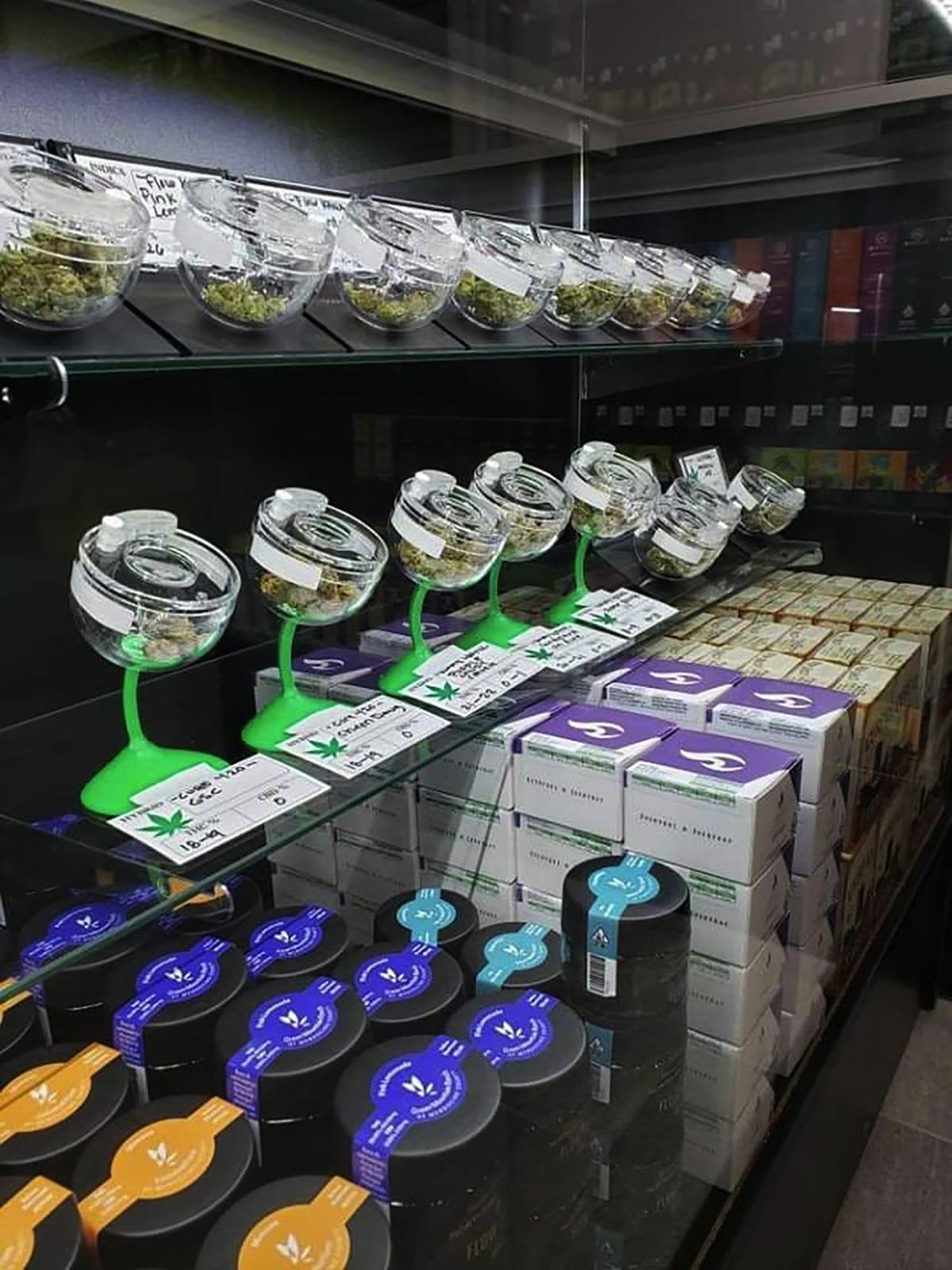 Marijuana is displayed inside California City Supply, the first dispensary to open since Kern County supervisors instituted a ban on sales. 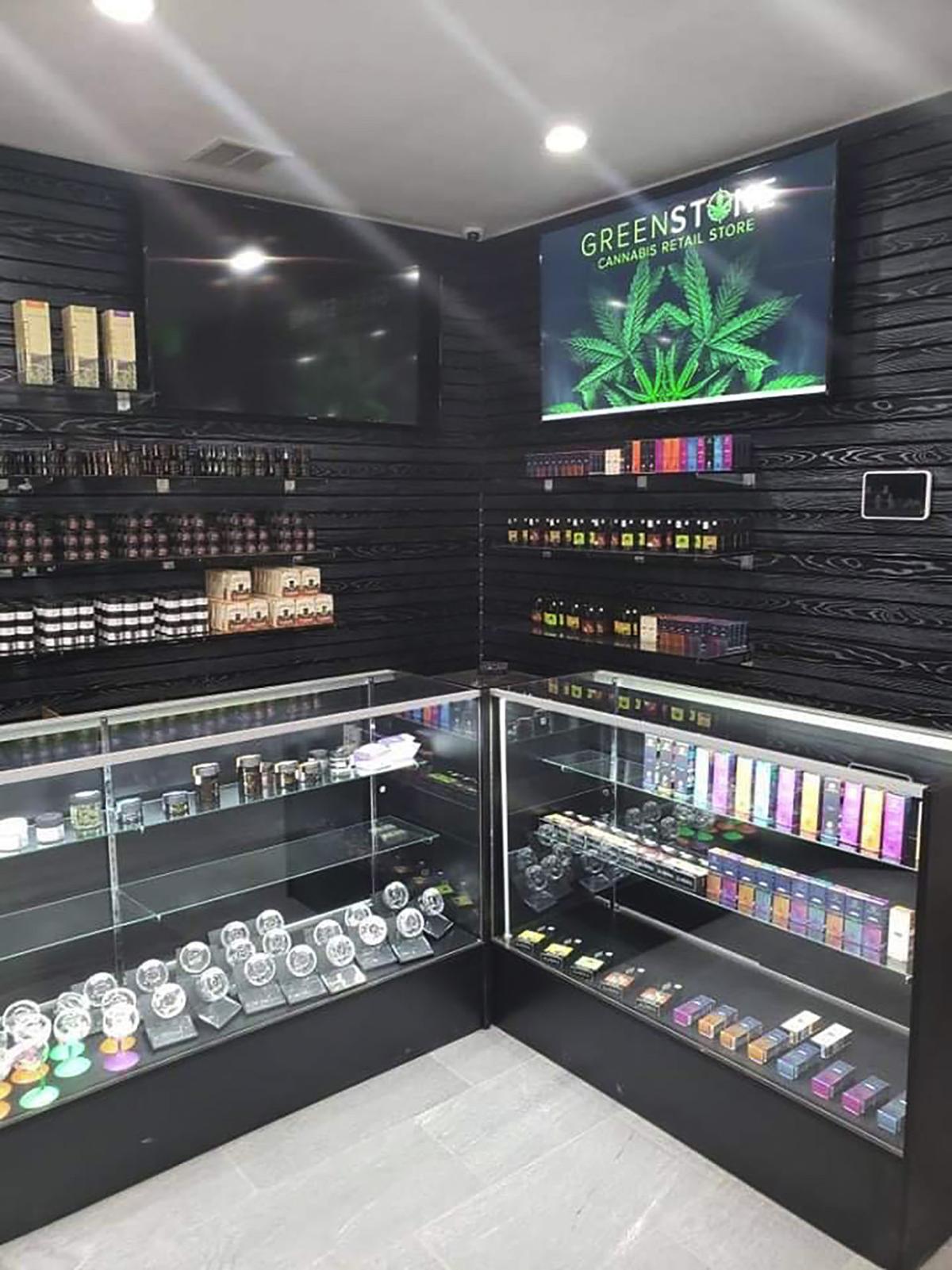 California City Supply is the first marijuana dispensary to open since Kern County Supervisors instituted a ban on sales.

Marijuana is displayed inside California City Supply, the first dispensary to open since Kern County supervisors instituted a ban on sales.

California City Supply is the first marijuana dispensary to open since Kern County Supervisors instituted a ban on sales.

Marijuana is back on the market in Kern County, at least the legal kind.

Since a ban by the Board of Supervisors came into full effect in May, all legal sales of the drug were extinguished everywhere in Kern County.

But one dispensary in California City quietly opened last Friday, becoming the sole legal storefront in the county.

California City Supply, operated by two local business owners, aims to be a place for much of eastern Kern County to go for both recreational and medical marijuana.

Bakersfield residents who travel to Los Angeles to purchase marijuana may also take advantage of the closer location.

And in a couple weeks, the owners hope to start delivering the product into Bakersfield, using discreet vehicles and an online ordering system.

“I was kind of excited to see it become an outlet for people to come in and do it the legal way, and not be out buying it on the street,” owner Rick Jones said of the store’s opening. “It’s a different business. I think the people wanted it, and I think it was done right and done legal.”

Although both the Bakersfield City Council and the Kern County Board of Supervisors voted to ban sales of marijuana, California City and Arvin have chosen to allow sales within city limits.

The California City City Council dispensed 10 permits for marijuana vendors earlier this year. Two of those permits allowed for a storefront that customers can enter and browse products in person. The other eight permits only allow delivery operations.

California City Supply appears to be the first storefront to take advantage of its permit.

“It’s nice that there is a new business that opened up locally for us,” California City Mayor Chuck McGuire said. “The number-one thing is it’s more revenue now too that will come into the city.”

He noted that while he did not support recreational use of marijuana, he has been convinced of the drug’s medical benefits and wanted an outlet for patients within the city.

"It can be done locally," he said. "That’s the biggest thing for me."

So far, Amanda Adolf, the other owner of California City Supply, said several cancer patients had already stopped by the new business.

Prior to her store opening, she said those patients needed to travel into Los Angeles to buy the product.

“So at least it’s a benefit to them,” she said.

Jones said his father died of cancer and potentially could have used marijuana when he was going through the disease.

Neither Adolf nor Jones smoke marijuana, they said. But both claim to have experience dealing with state regulations.

Jones works as a contractor and Adolf owns a gun and security store in California City.

“We’re going to play by the rules because we own other companies,” Jones said.

Over the next several weeks, California City Supply plans to work out the kinks in its operation before hosting a grand opening.

It currently employs two security guards and two “budtenders,” who tell potential customers about the product. When it gets up to full speed, Jones said, the company hopes to hire between 10 to 15 people.

While business has been up and down for the first few days, the two owners believe that it will pick up once word spreads.

“We only can see how it goes,” Jones said. “Maybe it turns out to be a bad idea. I don’t see that now, but nobody ever knows until time goes by and we see how it all works out.”

"Even cannabis advocates, like Rob Kampia, the co-founder of the Marijuana Policy Project, acknowledge that they have always viewed medical marijuana laws primarily as a way to protect recreational users."

"So the black tide of psychosis and the red tide of violence are rising steadily, almost unnoticed, on a slow green wave."

>>>Federal Sentencing and Punishment Federal statutes have harsher sentencing laws than state statutes on crimes that can be filed in state or federal court. Generally, the maximum punishment for federal crimes is much higher than the punishment for state crimes.

Federal judges have much less discretion in sentencing decisions.

Federal crimes carry additional punishment enhancements for most every crime.

"The crux of the case against the Kern County Supervisor is a 2017 vote in which she cast the lone “No” vote against a motion to ban commercial marijuana sales while her husband, Fernando Jara, lobbied on behalf of marijuana interests."

"Two marijuana investors have already come forward stating they paid $25,000 in fees to Jara to act as a Kern County consultant on potential projects."

Far out! I dont partake but good deal for those who do!

Whew that was a manifesto. Ok great let them open its here it’s been here now let’s tax it and build housing for the homeless and mentally ill. Now excuse me while I light this spliff.

Correction! Legal marijuana is legal in Bakersfield and Kern County. County leaders have decided to ban storefronts and acquiring weed from any other means is very legal.

Our leaders.must all be alcoholics!

the birth a desert pot shop......guns, blunts and cops.....desks....it even had DA Lisa Greene in there somewhere...its all so complicated.....California City Community News

On October 23, 2016, Chief Hurtado moved two surplus desks out of storage at the Cal City police station to make space available for first-aid equipment that had arrived. Just three days later, the City Manager placed Chief Hurtado on administrative leave. These now-infamous desks had been given to Cal City PD for free by the Barstow military surplus depot. Estimated value: $10.

The Chief intended for these desks to be used eventually by part-time investigators, whom the City was expected to hire within days, for the purpose of conducting background investigations of the owners and employees of incoming marijuana businesses. HR had already begun drafting the position description for these investigators. On the date of the move, the airport office that would be furnished for the new investigators was not yet available, but Chief Hurtado understood from the airport manager that the office would be available within about five days. Graciously, an occupant of a neighboring office, Fast Response, a security company, offered to store the desks for that short period, which immediately freed up the space at the station for first-aid supplies.

The Chief now stands accused of giving the surplus desks to Fast Response, and for this, he was placed on leave. These spurious allegations are false and slanderous.

The Chief never gave permission to Fast Response to use and keep the desks. Nobody at Fast Response ever believed the desks were given to their company. Prior to removing him from his position, nobody bothered to ask the Chief about his reason for moving the desks. Nobody inquired about the need for storage space at the station. Nobody asked Fast Response if they had any kind of agreement with the Chief to keep the desks. (There was no agreement.) Instead, the Cal City personnel made fake, false and fraudulent accusations that caused the DA’s Office to initiate a resource-wasting investigation.

To our knowledge, since Chief Hurtado was removed from his position, no further efforts have been made to hire background investigators for the imminent marijuana program.

 Lieutenant Frank Huizar AKA Frank Garcia (“Huizar/Garcia”) told the DA Investigators that Chief Hurtado’s brother owns a security business and wants to “acquire business” associated with the Mayor’s marijuana program. This is false. Chief Hurtado’s brother, Rick Hurtado, is out of work but does some occasional part-time work for Rick Jones, who owns a tow company and Fast Response. It is Mr. Jones’s business that offered to store the desks for a short period. Rick Hurtado does not own a security business.

 Huizar/Garcia said the two desks at the airport “were identical to the two missing desks.” At best, this is mere political spin. The desks were not missing. In fact, Huizar/Garcia himself told the investigators that he personally was present as Chief Hurtado moved the desks. The Chief did not hide anything about moving the desks and even introduced Huizar/Garcia to his brother, Rick, who was helping with the move.

 Former Fire Chief Jeff Armstrong (“Armstrong”) told the DA Investigators that the airport manager, Robert King (“King”), told him that he (King) had seen Chief Hurtado moving desks into the office at the airport. This is three levels of unreliable hearsay and categorically false. King subsequently provided a signed statement in which he declared he did not say anything of the sort to Armstrong and it was not possible for him to have seen the Chief moving the desks because he does not work on weekends. The desks were moved on a Sunday.

Chief Hurtado has an exemplary record of service to California City. He has worked for California City PD for 26 years, starting in 1991 as a police officer. He has been Chief for the last six years, during which time he has continued to be a “working chief,” meaning, in addition to his administrative duties, he has remained involved in active police duties. Even as Chief, he has performed CPR on average 3 times per year. Further, as Chief, he has logged over 3000 hours per year, which equates to almost 60 hours per week every week of the year.

Police Chief Eric Hurtado’s administrative leave has no basis in fact or reality, and we are ready to use every legal angle to fight for justice.