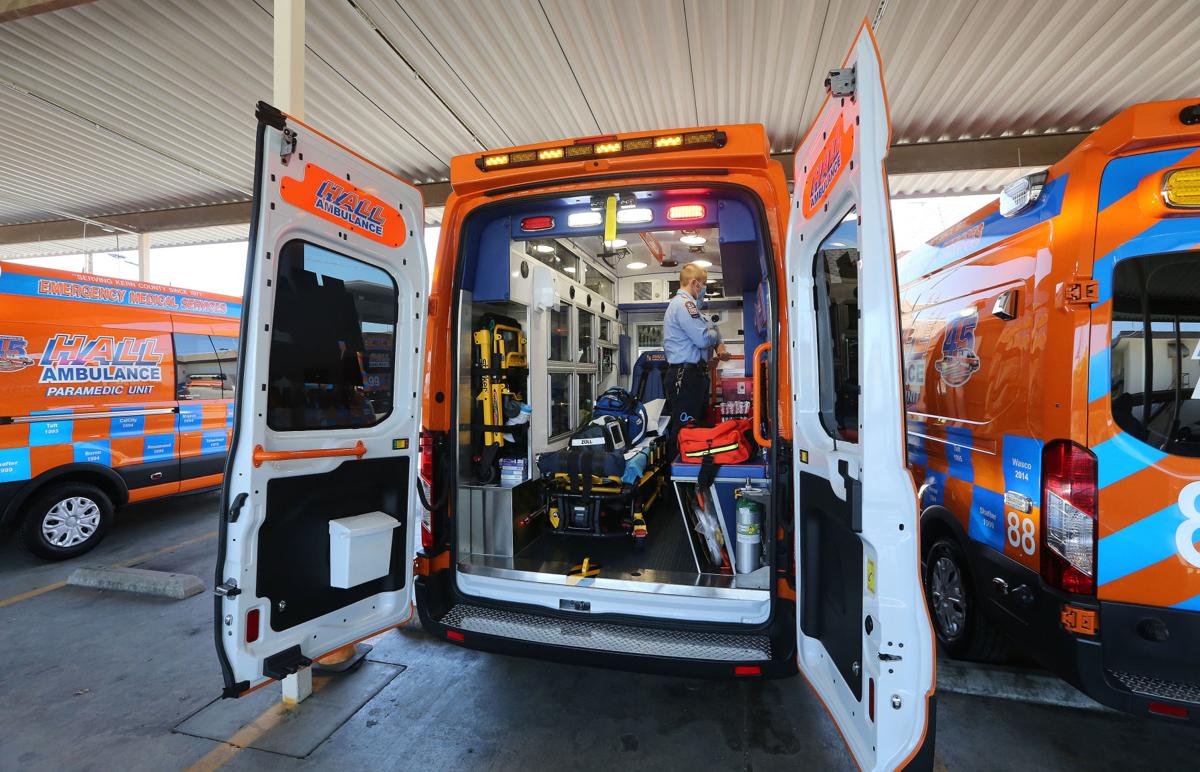 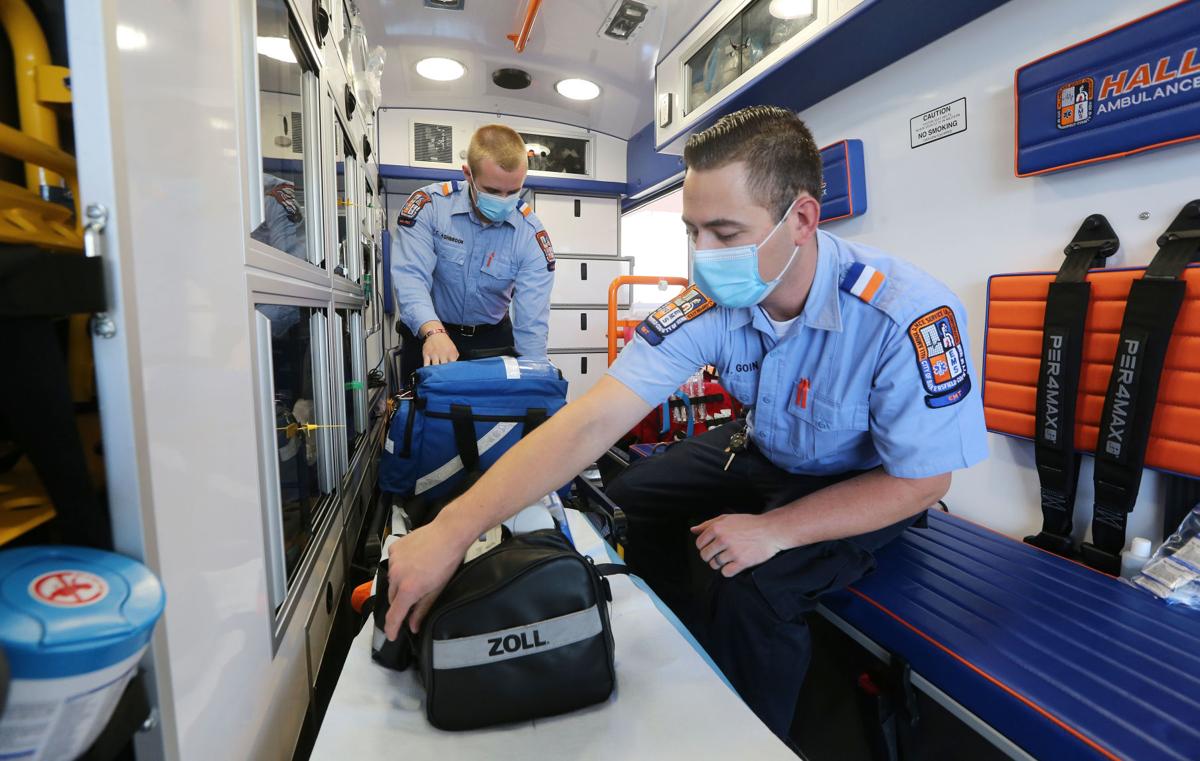 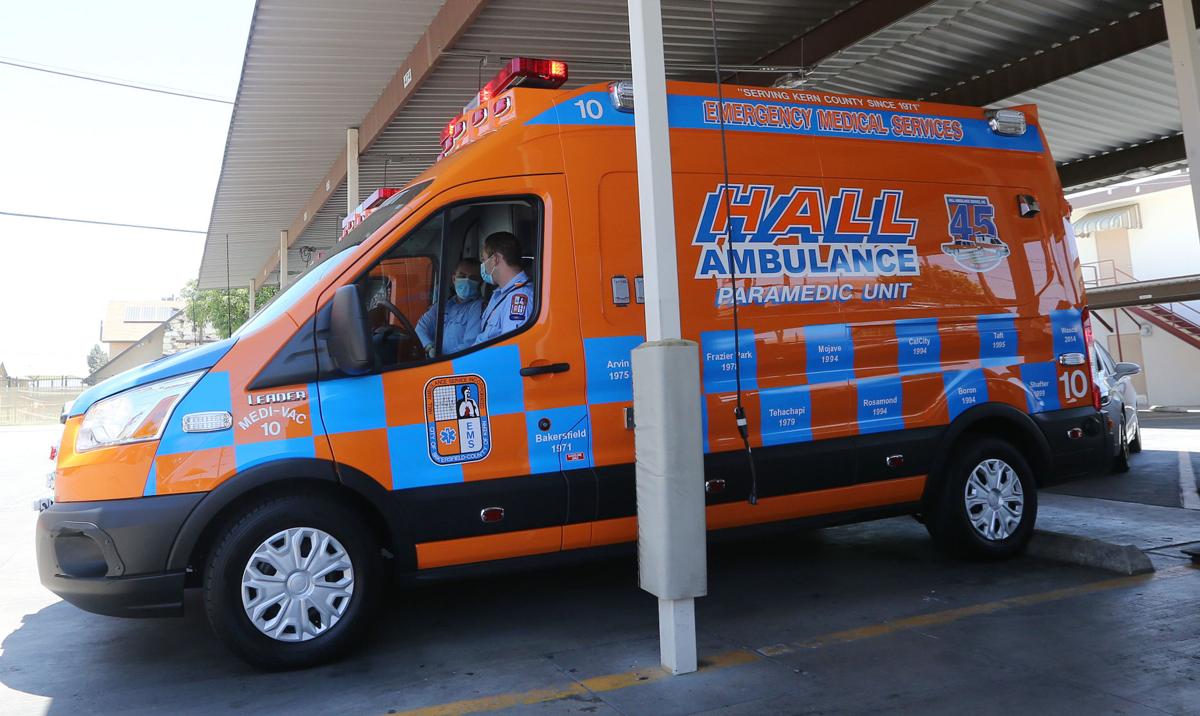 Paramedic Cortland Ashbrook and EMT Jason Goin finished their pre-checks and are ready to pull-out at the start of thier shift at Hall Ambulance. Federal records show Hall Ambulance Inc. received a PPP loan of at least $5 million that supported the jobs of 458 people for about two months. Nearly 7,000 businesses in Kern County received Paycheck Protection Program loans supporting 104,000 local jobs. Agriculture led the way with 19,392 jobs, followed by accommodation and food service (12,055 jobs), health care and social assistance (11,748) and construction (11,481).

Paramedic Cortland Ashbrook and EMT Jason Goin finished their pre-checks and are ready to pull-out at the start of thier shift at Hall Ambulance. Federal records show Hall Ambulance Inc. received a PPP loan of at least $5 million that supported the jobs of 458 people for about two months. Nearly 7,000 businesses in Kern County received Paycheck Protection Program loans supporting 104,000 local jobs. Agriculture led the way with 19,392 jobs, followed by accommodation and food service (12,055 jobs), health care and social assistance (11,748) and construction (11,481).

As resilient a company as Hall Ambulance Service Inc. would seem, there was a time shortly after California's stay-at-home order took effect when call volume dropped to a third below normal and it looked like layoffs were around the corner.

But after the Bakersfield-based company applied for and received a federal loan of at least $5 million, Media Services Director Mark Corum said the company was able to save the jobs of every one of its more than 450 emergency medical technicians, registered nurses, dispatchers and support staff.

"Without PPP we would have been forced to lay people off and in the end we haven't had to do that," Corum said.

The $669 billion Paycheck Protection Program, the federal government's primary tool for keeping people employed and businesses alive through the pandemic, has preserved an estimated 104,566 jobs across Kern County, according to an analysis of federal data by Bakersfield's Valley Republic Bank.

Numbers released earlier this month by the U.S. Small Business Administration show 6,815 businesses in the county received PPP loans. About 82 percent of the loans were for amounts less than $150,000.

Agriculture led the way with more than 19,000 jobs saved, Valley Republic found, followed by accommodation and food service with more than 12,000 jobs and health care and social assistance with a little less than that. Construction was a close fourth.

Observers say by guaranteeing loans to qualified small businesses, the government not only injected liquidity into the economy by putting money in consumers' hands, but also threw a lifeline to businesses on the brink, allowing them to meet payroll, pay mortgage and generally keep the lights on.

"It bought people time to adjust their business plans without having to lay off employees," said L.J. Suzuki, fractional chief financial officer at Denver-based CFOshare, an outsourced finance and accounting firm for small businesses.

He said there's a misconception that businesses have piles of money set aside to cover unforeseen crises. But the reality, he said, is they have debt obligations to meet and truly needed help to keep paying their employees during the pandemic.

The Paycheck Protection Program was specifically designed to help small businesses as defined by the SBA: companies with no more than 500 employees or those with assets worth no more than $15 million and average income of no more than $5 million after taxes during the last two years.

The idea was to give businesses loans equal to 2½ times their monthly payroll costs, up to $10 million each, though some affiliated companies have received loans independent of each other.

At least 60 percent of the money was to be spent on payroll or related expenses. Businesses staying within that guideline may qualify for at least partial forgiveness of their loans.

Starstruck Entertainment Services might not have made it if the Bakersfield-based entertainment staffing company hadn't secured a loan that President and CEO Marcus Johnson estimated at about $60,000. (Actual loan amounts weren't disclosed by the SBA, only ranges.)

Johnson said the loan program has been a big help for a sector that was the first to go down after the lockdown and will probably be last to fully recover, he said.

He was able to keep paying core employees and provide them with supplemental training while the business awaits a return to normalcy.

"We're going to be ready to hit the ground running," he said.

Another Bakersfield company that saw a drop in business during the early part of the pandemic, United Pipe and Steel Fabrication, had to furlough some of its temporary workers after business slowed in late June.

But President Ivan Ayala said because of a PPP loan of more than $100,000, the company was able keep its longtime employees doing work around the shop and going through safety training.

"The help (from the PPP loan) was tremendous," he said.

There's been considerable variety in local loan amounts. SBA data shows that in Bakersfield, seven businesses representing less than 1 percent of the city's PPP total got loans of $5 million or more.

Thirty-one others, or 3 percent of Bakersfield's total, received loans of between $2 million and $5 million. About 88 percent borrowed $1 million or less, according to the SBA.

Steve Annis, chief operating officer at Valley Republic, said some loan amounts may appear large but that such amounts can cover salaries of 100 or more workers for at least two months.

"The reality is that companies that could qualify for the $2 million PPP loan, you have to look at the number of people that they are employing," he said.

The federal Paycheck Protection Program, established this spring by the Coronavirus Aid, Relief and Economic Security Act, set aside $669 billion to help U.S. businesses pay their employees during the COVID-19 pandemic.

Lending totals were not disclosed, but a spreadsheet prepared by the bank indicates PPP loans to local businesses have supported jobs of 104,647 employees.

Here's a breakdown of benefits by industry, ranked by jobs impacted:

Small businesses can learn about federal provisions for forgiving Paycheck Protection Program loans by participating in a free, one-hour webin…