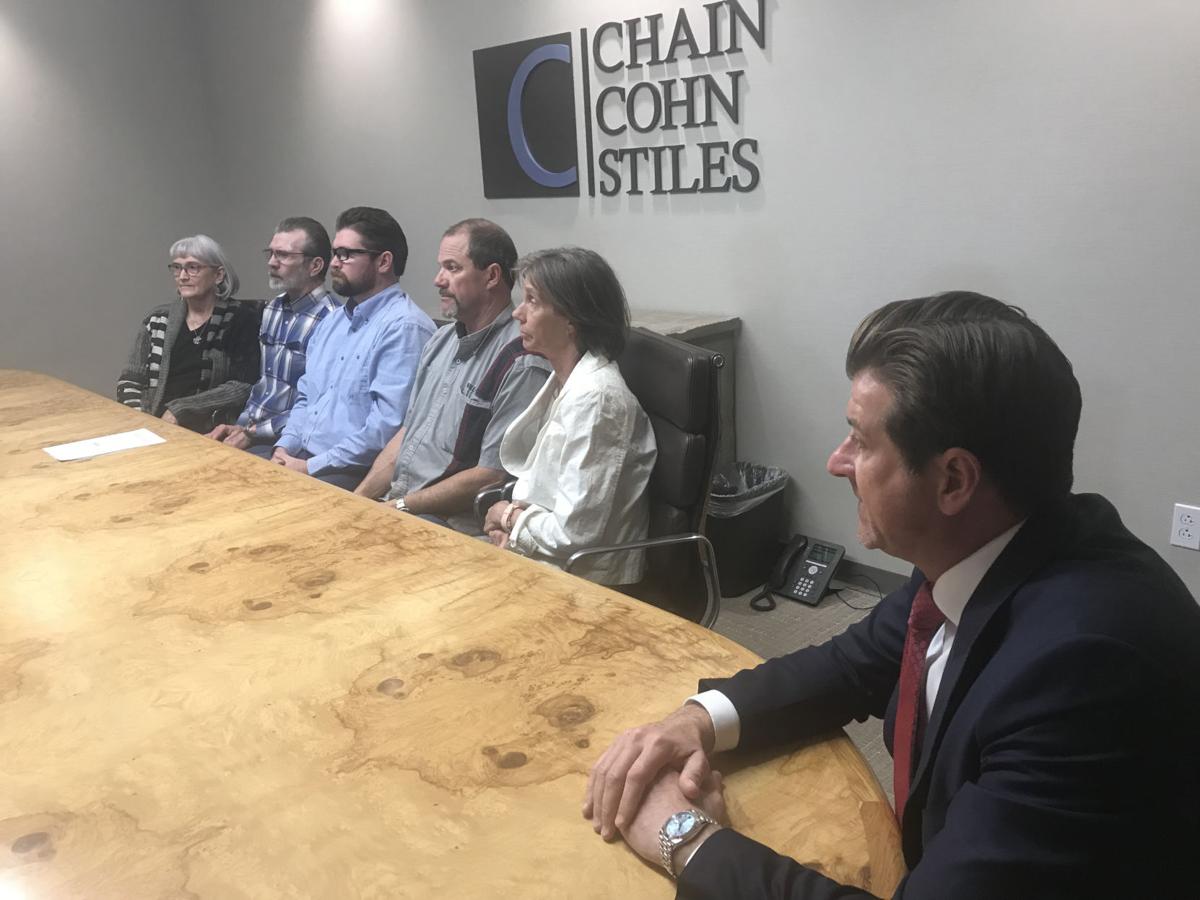 Matthew Clark, attorney at Chain Cohn Stiles, listens as his clients talk about the critical and unprecedented shortage of federal judges in the U.S. Eastern District Court of California, which includes Bakersfield and the southern San Joaquin Valley. 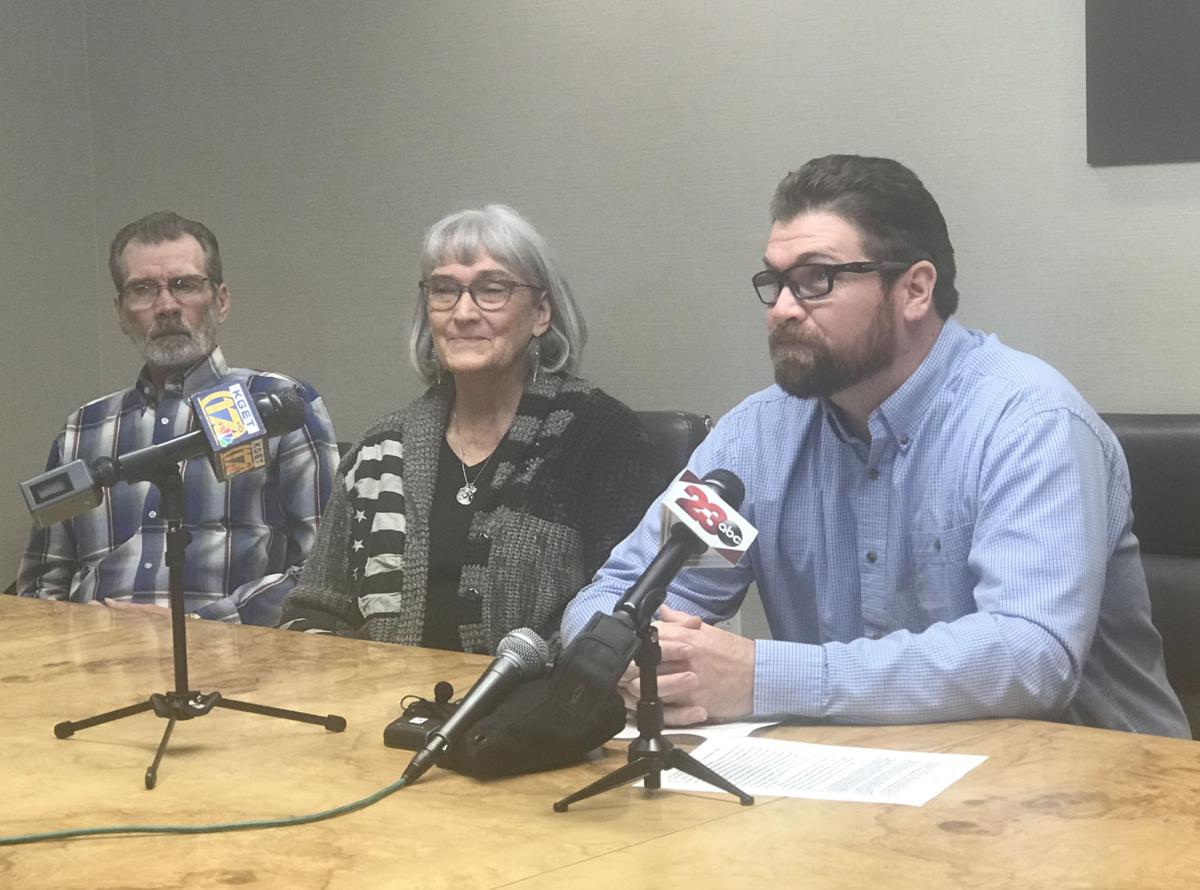 From left, Lee, Joan and Jerrad Johnson talk at a press conference held Thursday at the law firm of Chain Cohn Stiles about how their civil case -- and more than 1,000 others -- has little hope of resolution because only one working judge remains active at the federal courthouse in Fresno. "Justice delayed is justice denied," says Jerrad Johnson.

Matthew Clark, attorney at Chain Cohn Stiles, listens as his clients talk about the critical and unprecedented shortage of federal judges in the U.S. Eastern District Court of California, which includes Bakersfield and the southern San Joaquin Valley.

From left, Lee, Joan and Jerrad Johnson talk at a press conference held Thursday at the law firm of Chain Cohn Stiles about how their civil case -- and more than 1,000 others -- has little hope of resolution because only one working judge remains active at the federal courthouse in Fresno. "Justice delayed is justice denied," says Jerrad Johnson.

“Walk through the halls,” he says. “There’s no one there.”

Clark is exaggerating, but just barely.

Federal Judge Dale A. Drozd of the U.S. Eastern District Court of California, the federal judicial district that includes Bakersfield and the southern San Joaquin Valley, has instituted a "judicial emergency" order that he acknowledges “will seriously hinder the administration of justice” in the district.

“These are uncharted waters for this court,” Drozd writes in his order, signed Feb. 3. “The emergency procedures … are being implemented reluctantly.”

The emergency is already affecting hundreds of local cases and local families, including cases The Californian has covered in years past.

The district, which serves 8 million Californians is supposed to have six full-time judges — three in Fresno and three in Sacramento.

But in the past two months, three judges in Fresno have assumed reduced work status or inactive status.

“We have one judge” in Fresno, Clark says.

“We are the single most impacted district in the country.”

What does that mean for individuals and families with cases pending?

For William “Lee” Johnson and his family, it’s a matter of financial survival. Johnson, now 60, was nearly killed in a December 2018 explosion at a compressed natural gas fueling station in Buttonwillow.

The accident has made him unemployable, and his wife, Joan, has had to tap her retirement fund to keep the family stable financially.

McCarthy's office did not immediately respond to inquiries for comment.

“Until this is handled, the danger is out there for everybody,” Lee Johnson says.

Others affected include the family of Nancy Joyce Garrett, who was killed in September 2014 when Kern County Sheriff’s Deputy Nicholas Clerico ran a red light and slammed into Garrett’s car. Nearly six years later, that civil case is ongoing.

Lee Johnson’s son, Jerrad Johnson, lays the blame squarely on politicians. Federal judges are nominated by presidents and confirmed by the U.S. Senate. But the job has not been getting done, and he’s frustrated, as is every family member affected.

No judges in the Eastern District have been appointed by President Trump, though Republicans have been the majority party in the Senate since January 2015.

“There are over 1,000 civil cases now on hold,” Clark says. “That’s a thousand more families going through the same thing.”

According to Drozd, the shortage of full-time district judges "will seriously hinder the administration of justice throughout this district, but the impact will be particularly acute in Fresno," where Drozd will now be presiding over some 1,050 civil actions and 625 criminal cases.

"Until two candidates are nominated and confirmed to fill this court's two vacant authorized district judgeships, this situation can only be expected to get progressively worse," the judge says in his order.

Considering the history of the Eastern District, the shortfall in resources has been foreseen for years.

For more than a decade the Judicial Conference of the United States has recommended that the district be authorized for up to six additional judgeships, doubling its current allocation. However, those recommendations have not been acted upon.

This is the case despite the fact that since the last new district judgeship was created in the Eastern District in 1978, the population of the district has grown from 2.5 million residents to more than 8 million.

By contrast, the Northern District of California, which has a similar population, operates with 14 authorized district judges, Drozd says.

The situation is so extraordinary Drozd acknowledges the steps he is reluctantly taking may not only violate his own standing order involving civil actions, but may also contradict Local Rules of the Eastern District of California.

"The court has been placed in an untenable position in which it simply has no choice," Drozd writes. And he acknowledges that "there will likely be unforeseen consequences due to the implementation of these emergency procedures."

For the Johnson and Garrett families, those consequences are already here.

“We admire the ABA's goal of providing a non-politicized review of judicial nominees …but we do not intend to give any professional organizations special access to our nominees,” White House Counsel Donald McGahn said in March 2017. Yet, in the Republican senate, their practice of considering only those judicial nominees recommended by the highly partisan right wing private organization, the Heritage Foundation speaks to the hypocrisy of this statement.

Over the past 20 years a number of nominees for lifetime judicial appointments rated by the American Bar Association as “unqualified” have all been appointed by Republicans. None by Democratic administrations. Some Republicans in congress have dismissed the ABA as being some kind of shill for the left wing. Having not a shred of evidence that claim is as about as false as it gets and reflects the “party before country” values that is the Republican party, now the party of Trump. In this administration alone, he has seen to conformation marginally qualified and 4 unqualified people now enjoying lifetime judicial appointments showing clearly the administration’s interest in partisanship, ideology and power vs. the rule of law. In his dedication to the president and in ignoring his oath of office to defend and support the constitution, Senate Leader “Moscow Mitch” McConnell is dedicated in pushing through Trump’s nominees regardless their qualifications or lack thereof.

The American Bar Association has a strong well documented ¾ a century long track record of providing honest non-partisan assessments of judicial nominees on their qualifications under the law. A responsible administration would heed their recommendation vs. that of looking to a highly partisan private gaggle of ideologues to provide judicial nominees. Our elected leaders, regardless their party preference or whether or not they are part of the Cult of Trump, need to remember their oaths of office they are now ignoring and insist that any judicial nominees regardless their own ideological preferences or that of the nominees be rated as at least qualified if not highly qualified by the ABA. The nation deserves nothing less.

Why would a qualified judge live here when position is offered in better location?

Your favorite representative is busy with his own self interest.

Trump, through McConnell, has appointed over 150 lifetime judges. Many of them have never tried cases, are supremely unqualified right wing nuts. What's stopping him here?