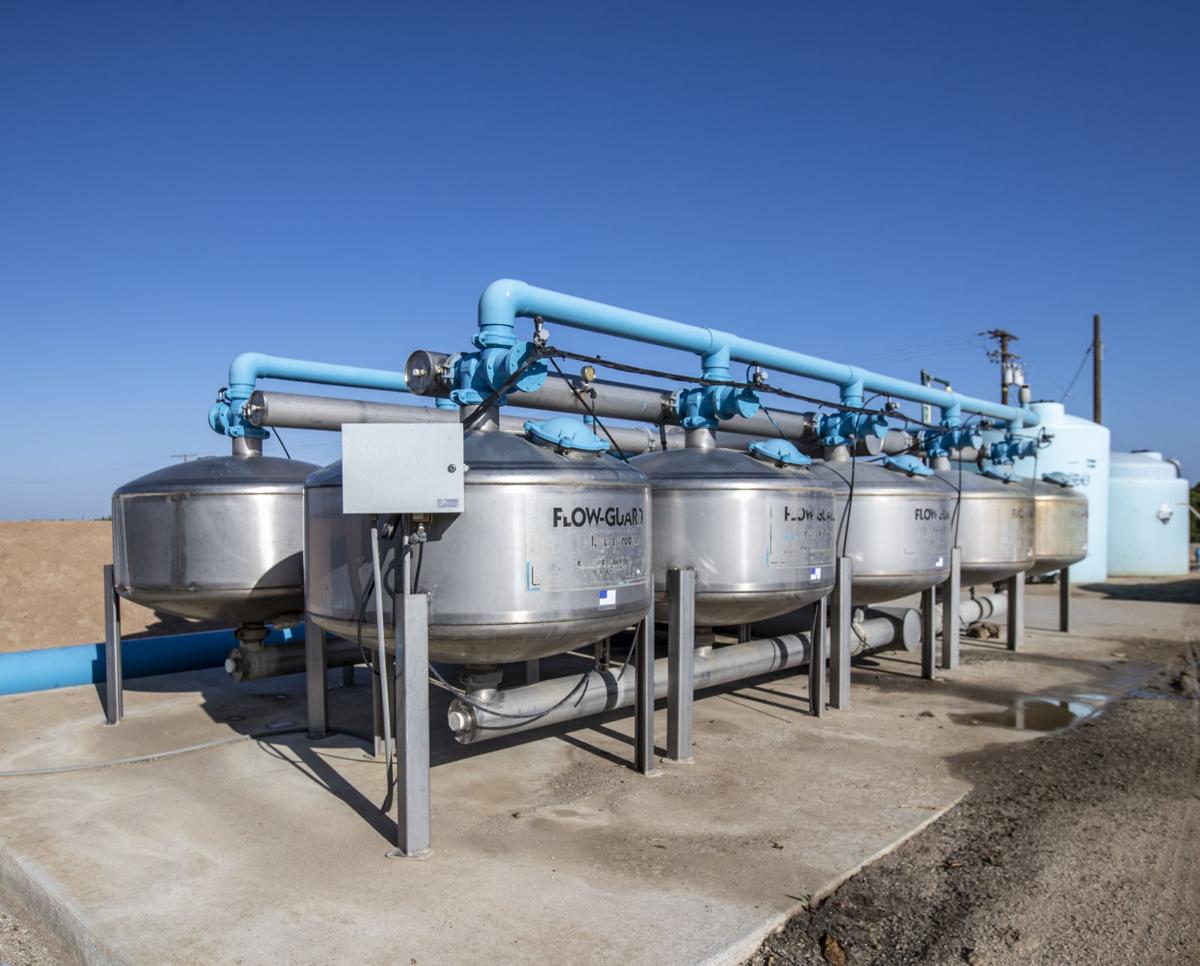 Fisher Farms Crop Management has invested in a large irrigation system on its orchards near Delano. 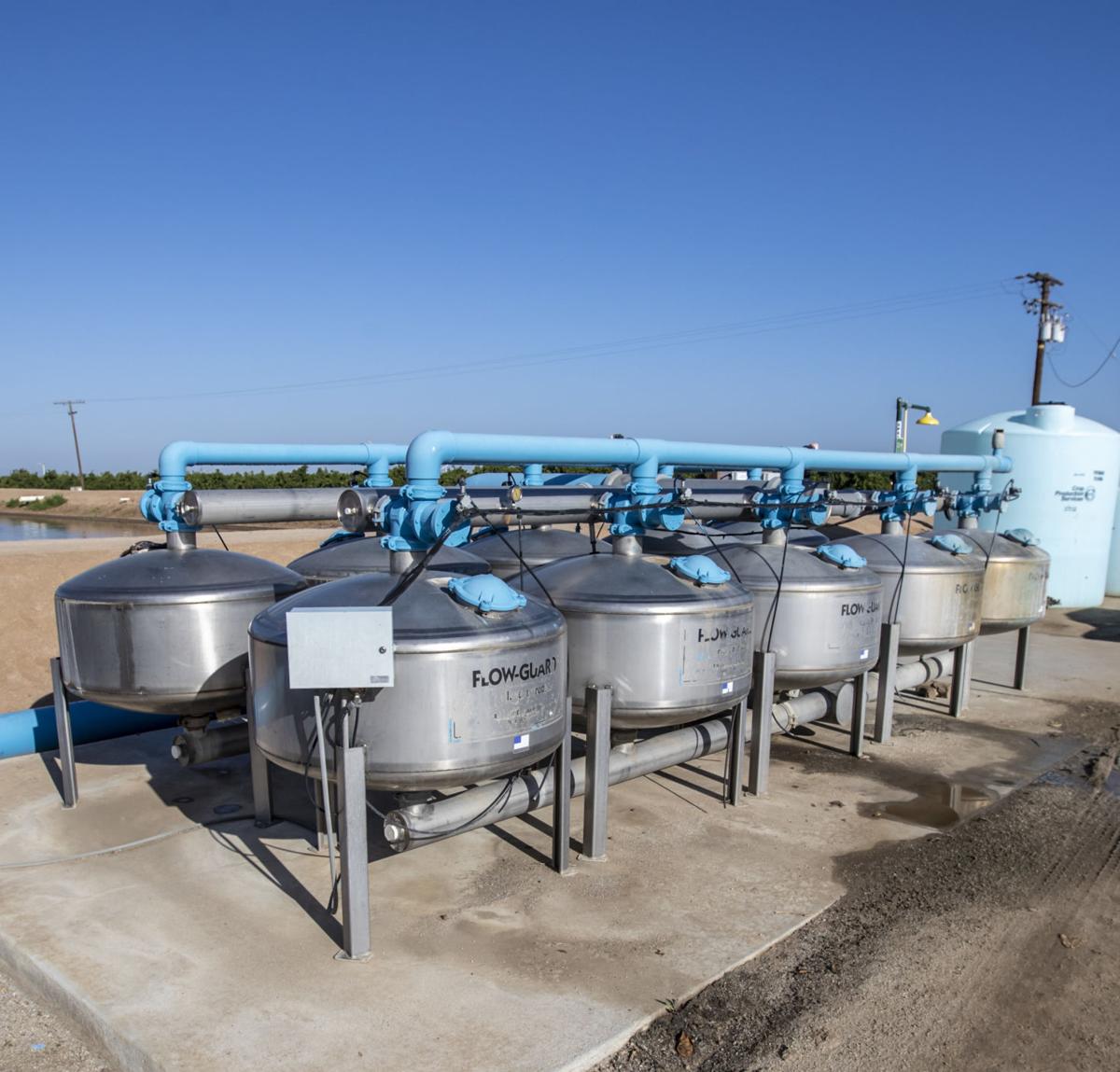 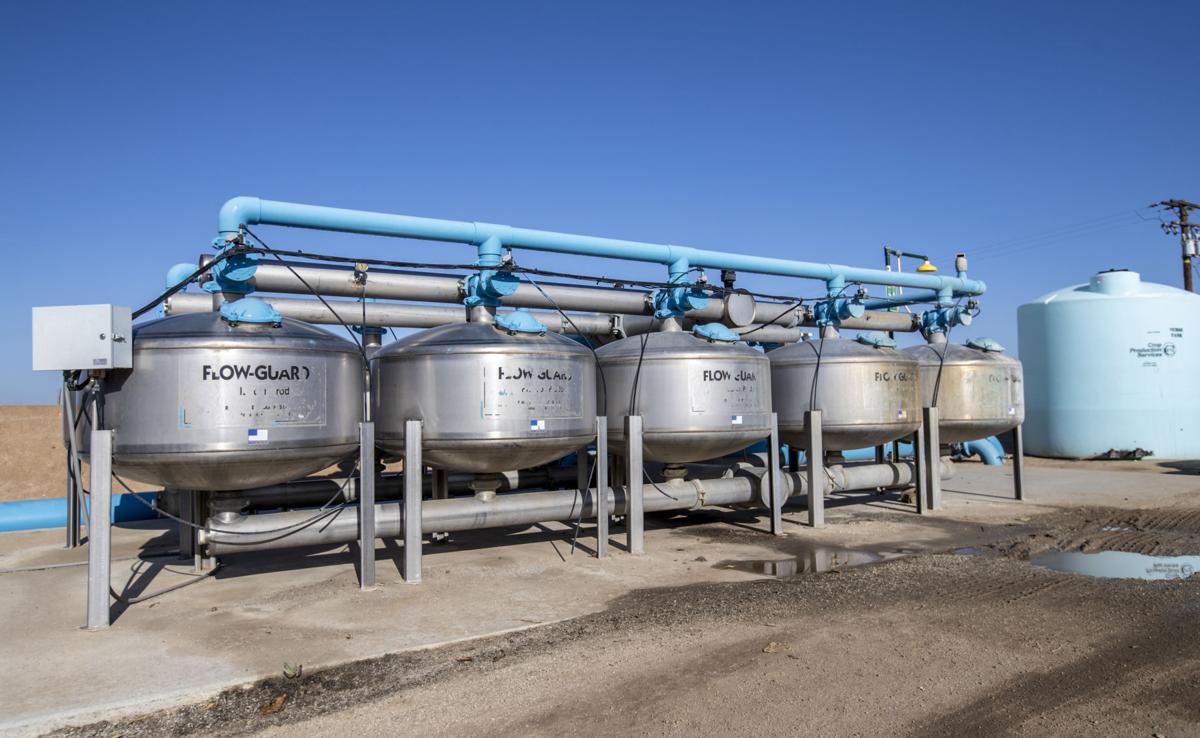 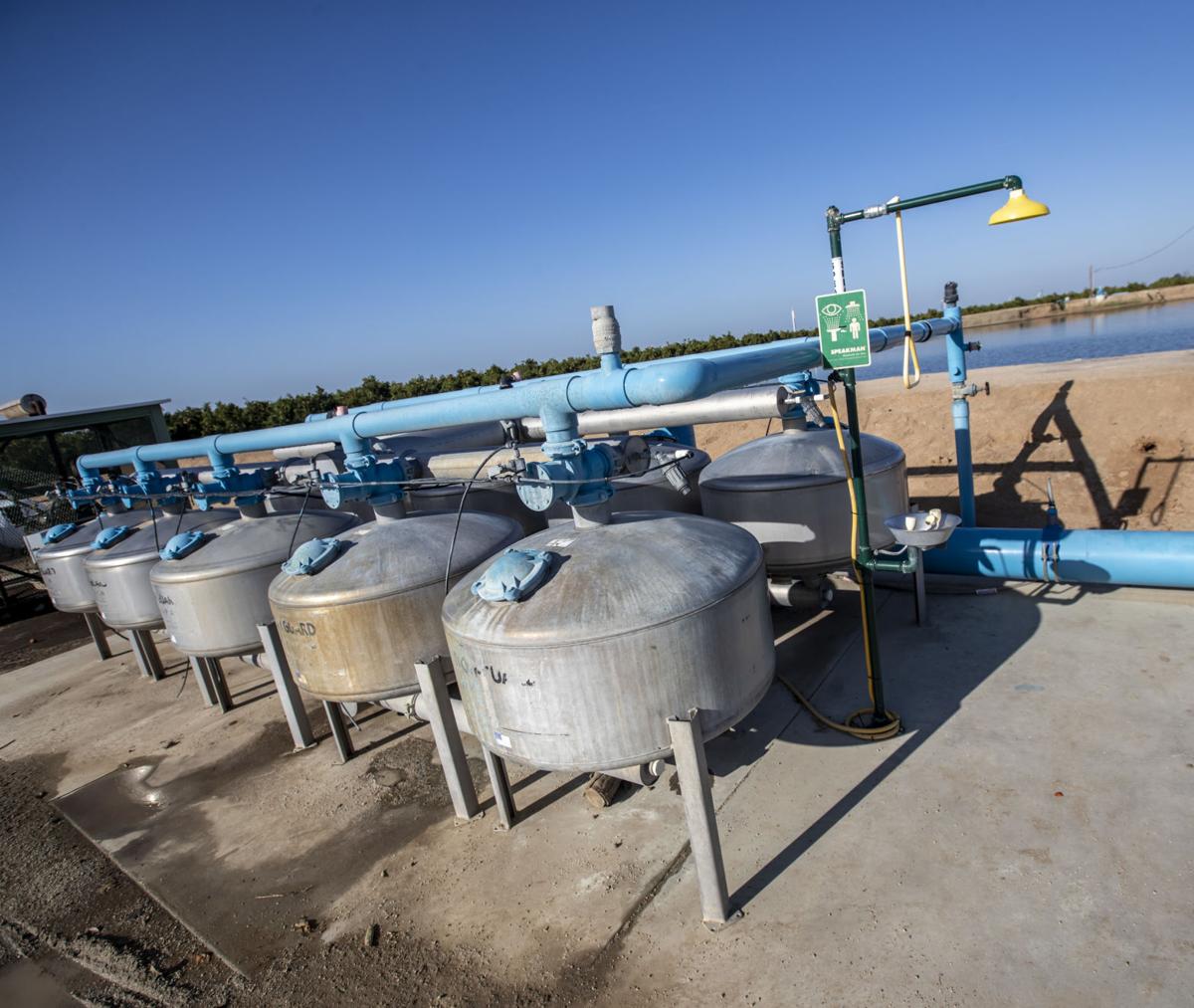 A series of filters helps purify water from a nearby pond at Fisher Farms Crop Management. 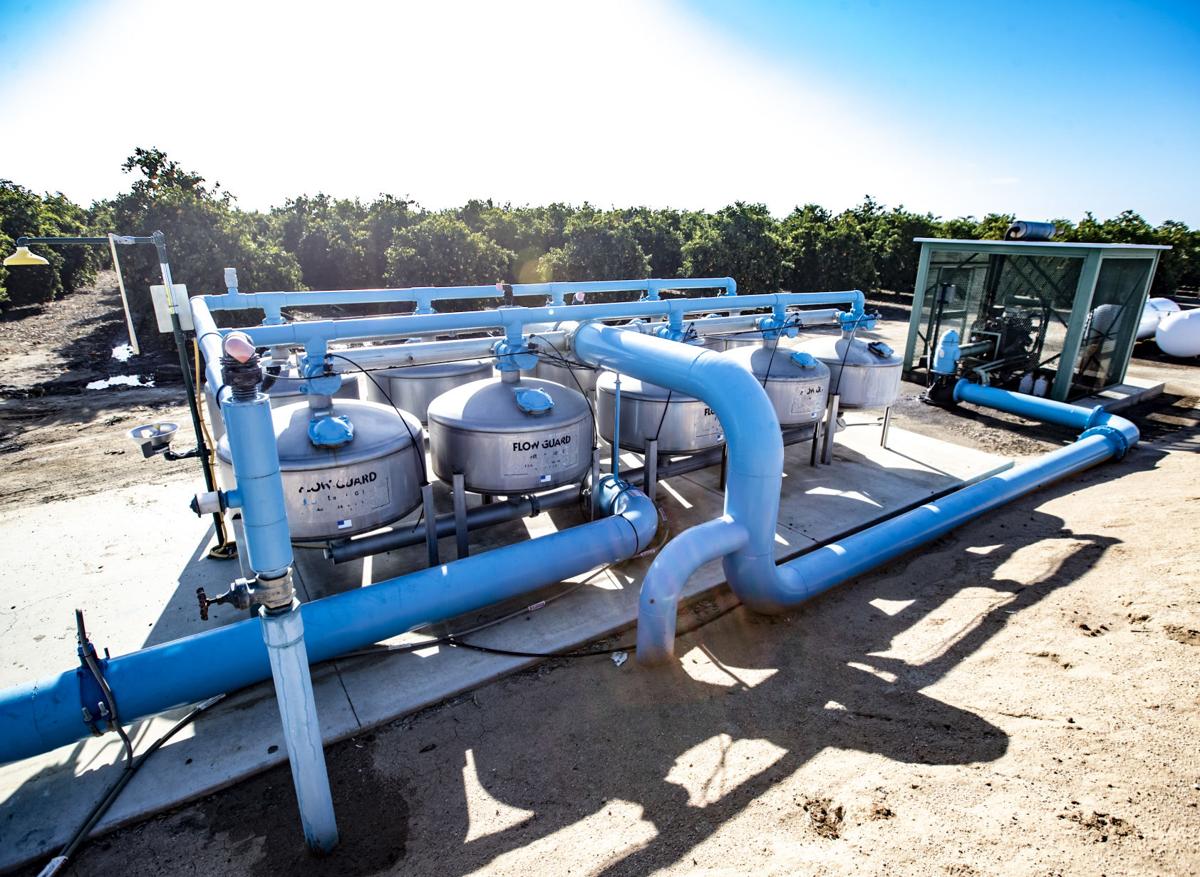 A large irrigation and filteration system is used to filter water for irrigation at Fisher Farms Crop Management.

Fisher Farms Crop Management has invested in a large irrigation system on its orchards near Delano.

A series of filters helps purify water from a nearby pond at Fisher Farms Crop Management.

A large irrigation and filteration system is used to filter water for irrigation at Fisher Farms Crop Management.

Delano citrus grower Matt Fisher prefers not to use the term "climate change," and doesn't like debating the topic, but he's thought a lot about how to deal with it.

He has invested in highly efficient drip-irrigation systems — more so than many of his peers — because he is concerned more frequent droughts may be in store. But he sees worsening pest infestations and other potential results of increasingly volatile weather as being beyond his control.

"As a grower, you just take it as it comes," he said. "It's the reality of our business."

Mention of climate change may still provoke skepticism in other sectors, but in California's agriculture industry, the discussion is less about whether disruption is coming than it is about how farmers will adapt.

A consensus appears to have emerged that extreme weather conditions — drought and flooding, hotter summers and milder winters — will increase competition for irrigation water such that some crops now produced in the Central Valley may no longer be economically feasible in the region.

Ag economists say that high-value commodities like nuts, table grapes and citrus are likely to remain viable, depending on market demand, but that the future could be shaky for row crops and dairy feed, such as alfalfa, hay and silage corn.

There is also concern about broader impacts that climate change might have on agriculture in the state. For instance, warmer winters could deprive certain trees of the "chill hours" they need to produce quality fruit. Also, some kinds of pests might proliferate if temperatures don't drop low enough to wipe out a large portion of their population.

Some of the changes may be manageable through investment in groundwater recharging or switching to different varieties, though observers emphasize solution may come with new challenges and trade-offs. They say survival will require adaptability and resilience — just the sort of qualities growers are known for.

The challenge in context

For all the alarm, industry leaders say the threats climate change presents are no worse than other challenges they must cope with: rising labor costs, groundwater pumping restrictions and regulations that cut off access to effective, if potentially harmful, pesticides.

Grower representatives also take the climate-change discussion as an opportunity to promote policies benefiting ag interests even if long-term weather changes don't occur. Expectations for worsening water scarcity highlight the need to build more water storage and conveyances, they note, as well as increased use of percolation to refill underground aquifers.

People familiar with the long-term weather forecasts for Central Valley's ag fields also point out what they see as an important distinction between mitigation and adaptation. That is, farmers may not agree with what they see as onerous regulations intended to reduce greenhouse-gas emissions seen as accelerating climate change, but they share an interest in preparing for the changes ahead.

"Everybody I know in agriculture says, 'Yes, the climate's changing and adaptation to that climate change is crucial.' So that's not controversial," said Dan Sumner, an agricultural economist at UC Davis. "At the same time, that doesn't mean they buy into every public policy proposal for mitigating the climate change."

In that regard, Kern County farming powerhouse The Wonderful Co. has forged its own path. Looking to shrink its own carbon footprint, the Los Angeles-based company announced Tuesday it plans to use 100-percent renewable energy to power its U.S. operations by 2025.

"One of the main reasons we've committed (to that goal) … is that we understand the impact climate change will have on our industry," Rob Yraceburu, president of its Wonderful Orchards division, said in a written statement. "We must be prepared with our water management and crop cultivation to sustain our operations."

Some of the most recent thinking on how climate change might affect Central Valley ag was outlined in a report released in August by the California Energy Commission.

Asserting that water shortages will worsen as gradual warming reduces mountain snowpacks, the study concluded farmers will turn to those crops that produce the greatest revenue per unit of irrigation water.

One of the report's key findings is that increased competition for water will mean lower-value crops — feed crops, in particular — will have to be produced elsewhere, depriving dairies of easy access to the hay and alfalfa they feed their herds.

Sumner, who was among nine contributors to the study, said the projected reduction in feed crops doesn't necessarily mean California will end up producing a lot less milk. Hay could be imported from other states, for example, and southern Central Valley dairies could potentially relocate to Northern California.

But neither of those changes may be necessary, said Michael Boccadoro, executive director of Dairy Cares, a statewide dairy coalition. Feed crops are only low-value when viewed apart from the dairies they support, he said.

"We don't grow alfalfa just to grow alfalfa," he said. "We're growing it because we need it for a very high-value crop out here," he added, referring to dairy products.

There's also a bright side to worries that milder winters will lower the quality of fruit from trees that don't get enough chill hours.

David Magana, a senior analyst at Rabobank specializing in fruit, vegetables and tree nuts, said farmers will probably be able to substitute other varieties more suitable to the new conditions.

"There are varieties that require less chill-hour requirements. That's another way," Magana said. He added that the climate-change outlook is unclear for row crops like carrots.

Sumner agreed growers will probably want to try out different crop varieties less susceptible to higher overall temperatures. But he noted there's typically a trade-off involved, in that a substitute tree won't necessarily offer the same pleasing flavor or other beneficial characteristics.

It's worth noting, Sumner said, that even though California ag may struggle to adjust to climate change, so will its competitors overseas. He said the real question is whether the state's farming climate will remain superior in relation to that of other countries producing the same crops.

When talking about how changing weather patterns are likely to affect California agriculture, state officials generally refer to two official reports, one from 2013, the other from August of 2018.

The first, produced by a scientific consortium and released by the California Department of Food and Agriculture, lays out climate-related challenges ahead and concludes with a series of recommendations for addressing them.

Among the challenges, according to the report, are higher temperatures; fewer of the cold, "chill hours" trees need to produce quality fruit; more frequent droughts and flooding; and changing conditions for plants, pests and pollinators such as bees.

The full report can be found online: https://www.cdfa.ca.gov/environmentalstewardship/pdfs/ccc-report.pdf

The other study, fourth in a series put out by the California Energy Commission, asserted water scarcity will be agriculture's most significant climate change impact in the Golden State.

Competition for water, it said, will favor high-value specialty crops such as almonds, pistachios, mandarins and table grapes. Row crops would lose out, as would silage crops like alfalfa and hay used to feed dairy herds, the authors said.

Weather conditions will become more variable and snowpack will diminish as a source of water, it said. Maximizing and protecting groundwater supplies will be crucial if farmers are to avoid large financial losses, according to the report, which examined various climate-change scenarios.

Notably, it predicted more grazing land will become available in California foothills, while irrigated rangeland will shrink in the Central Valley.