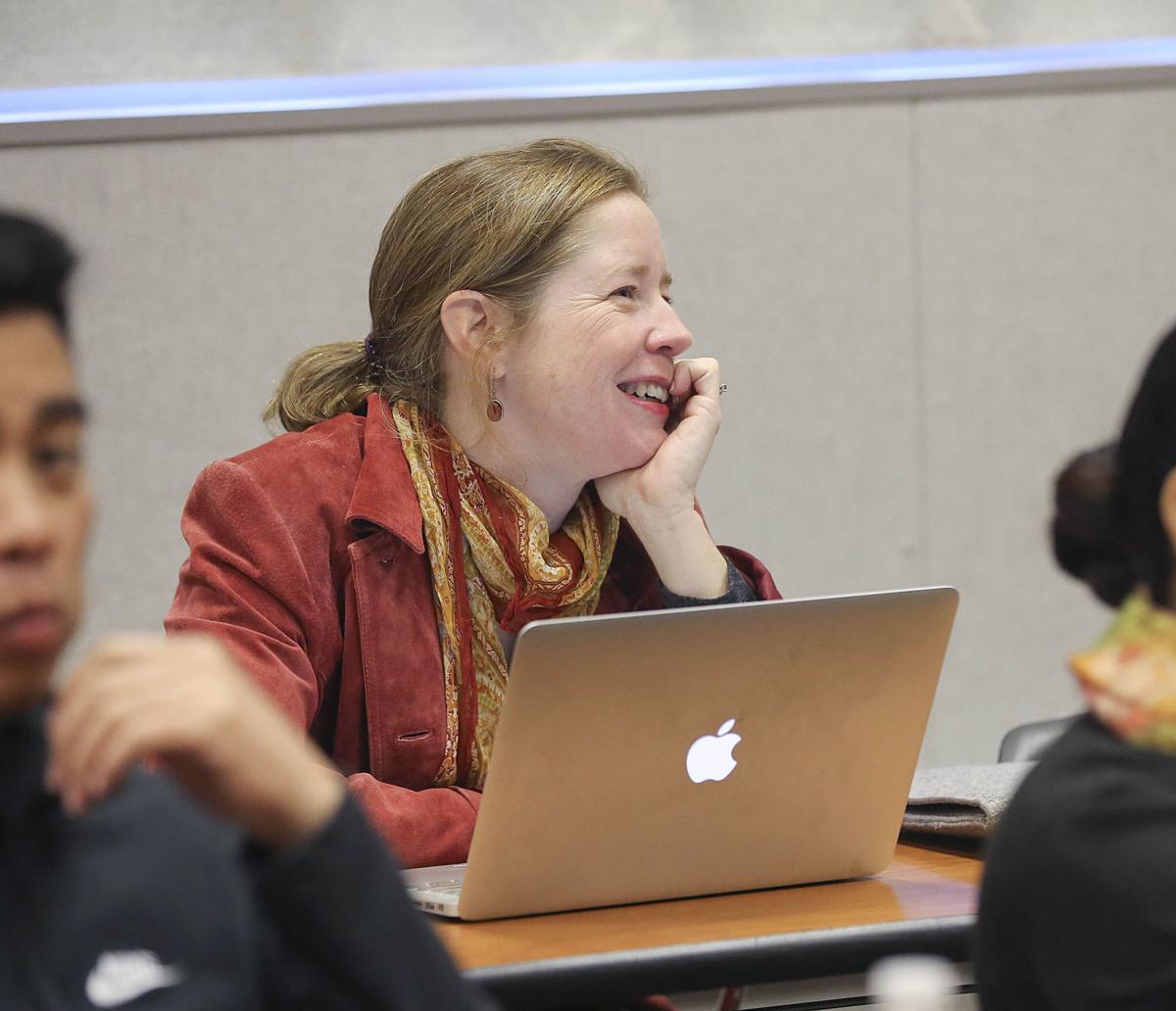 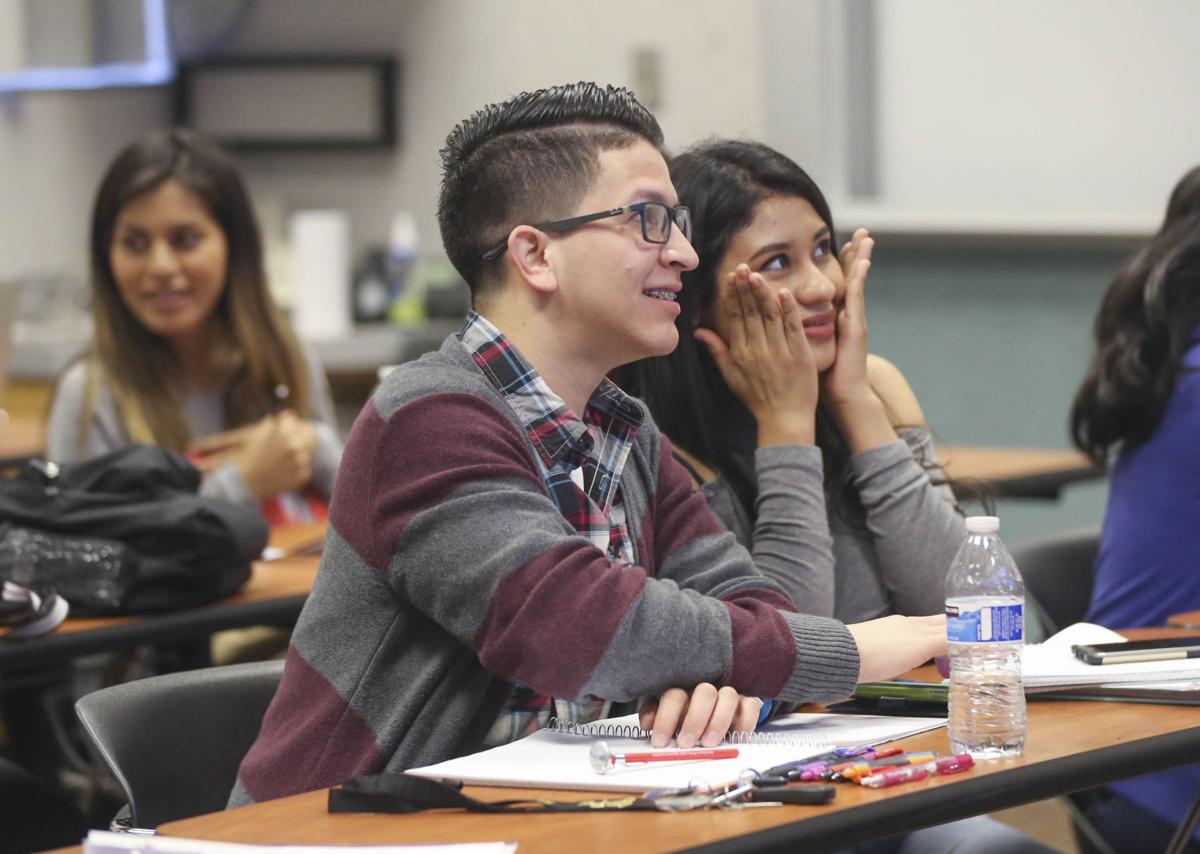 When Sarah Baron tells her students at Bakersfield College about the poor health outcomes in Kern County, their eyes glaze over.

Many have spent their lives here. They’ve heard the litany of health issues before. They know Kern leads the state when it comes to rates of sexually transmitted diseases and teen pregnancy, that few are untouched by asthma and valley fever, and that the majority of residents are overweight or obese, often suffering or succumbing from the associated risks, including stroke and coronary heart disease.

But when Baron, a public health sciences professor, tells her students that they don’t have to accept those outcomes as norms, they begin to perk up. They get excited.

“They’re tired hearing about how bad things are. They tune out,” Baron said. “When I say, ‘you can make a difference,’ their eyes light up.”

So for the second year in a row, Baron is taking advantage of that enthusiasm by hosting an event that brings together students, community leaders, techies and problem-solvers for three days and challenging them to not only identify a local public health challenge, but to develop a way to address it. She calls it a Hackathon.

Students and attendees will hear from panels of community organizers, government officials, victim advocates, public health officials and media who will discuss topics including human trafficking, STDs and air quality. (Full disclosure: Bakersfield Californian Health Reporter Harold Pierce is presenting a workshop at the conference on the role of journalism and community engagement in public health).

Everyone in the community — not just BC students — are invited.

“If they want to come, they can. This is their community, and asking them to be part of the change and the difference is empowering. That’s what makes public health exciting — you empower people,” Baron said.

Last year, students grouped together with a focus on developing apps that would address a broad range of health topics. This year, the focus has been narrowed to topics that deal with social justice in health, Baron said.

The Hackathon will address this central idea: why are some parts of Kern County better off than others, and how can areas left behind be raised up?

Neighborhoods devoid of stores that sell nutritious fruits and vegetables, areas that lack of clean drinking water and places with limited health-access are all examples of social injustices, which could lead to geographic health inequities.

When it comes to the intersection of technology and public health, BC Associate Professor of Information Technology Eddie Rangel imagines a world of sensors.

“We use these little devices to keep track of our steps to gauge our health … why can’t we get a little sensor out in the fields to detect whether there’s pesticide overspray, connect that to Twitter and and tweet out when oversprays are detected?” Rangel said, enthused about the possibility of mitigating the effects of pollution.

Baron envisions something similar for valley fever, a respiratory disease caused by a microscopic fungal spore that, when inhaled, causes the disease. The U.S. Centers for Disease Control and Prevention has been working on developing an air sensor that can detect the fungal spore in the air. If that could be paired with a mobile alert that is issued to everyone in high-risk areas during poor air quality days, the state could see fewer cases, Baron said.

Rangel spent this year working on an app with a team of students that was dreamed up at last year’s Hackathon for Building Healthy Communities, a group that, in partnership with The California Endowment, was launched to transform areas devastated by health inequities.

The social media app connects Building Healthy Communities members and alerts them to issues of interest to their neighborhoods, Rangel said. His team will be presenting the beta version of the app during this year’s Hackathon.

Mataalofa Hubbard, a Bakersfield College public health student, said she’s excited to dig into the issues leading to health inequities, but that she’ll be focusing on one during the Hackathon that has impacted her community directly: a grocery store gap.

In Hubbard’s east Bakersfield neighborhood off Oswell Street near Brundage Lane, there’s few options for a nutritious meal. There’s a few fast food options, and as far as grocery stores, just one Walmart Neighborhood Center that Hubbard said is a little expensive.

“We really have no grocery stores around here,” Hubbard said. “We tend to have more fast food restaurants and go there because that’s all we have. It’s a lack of grocery stores throughout the whole east side.”

She envisions a project that would shed light on the issue and perhaps help government identify areas where subsidies could be doled out to grocery stores willing to set up shop in underserved areas. Or short of that, a partnership with grocers to deliver nutritious items to low-income residents who don’t have transportation.

Having more options is critical in the fight to decrease the county’s high rates of obesity and diabetes, Hubbard said.

“It’s because we have nothing healthy to eat out here,” Hubbard said. “If we did, it could be life-changing.”

To register, go to www.bcinnovates.com

BC rolls out public health degree to train 'change agents'

Responding to a dearth of homegrown public health specialists and an expanding lack of community literacy in health issues, Bakersfield Colleg…

Why are so many of our children even needing Mental health services it seems to me that so many children and young adults lack the support and upbringing that they need or even the proper influence they need... According to  http://yourhomeworkhelp.org do my statistics homework bullying happens so often and good old fashion values gone out of schools God for one if there was more prayers and discipline and parent involvement there would be less mental health issues the thing is you have some parents who lost their values along time ago which teach their children poor values then it continues down the line next thing you know there’s very little respect anywhere We really cannot expect the school to do everything and take the responsibility of our children it is us as parents to be more involved and take that responsibility to teach our children to have positive attitude to stop bullying build up their self-confidence and talk to her children daily and protecting children these days call each other names belittle them for the smallest things and often when they tell their told not to be a tattletale that’s why the suicide rate is so high Get Jesus and put prayers back in schools put paddeling back in schools and teach respect children are growing up to fast and parents need to pay more attention to their children and what they say or do around them our children are our seed and the devil wants to corrupt our seed it is our job to make sure we water them and feed them with the right nourishment‘s in order for them to blossom and have great fruits as long as the devil destroys our seed he will win we need to build our foundation make sure our roots are strong and stand strong against the enemy I have nothing against mental health services they help a lot but we cannot put everything upon the school we need to take our own responsibility of our children for our children did not asked to be born they are gift from God a treasure we need to be thankful for

I also encounter the same problem. thanks for your answer. It solved very quickly the problem I was having hotmail sign in

So STD's teen pregnancy and being a fatty are not personal choices but "health outcomes" and The Man is responsible for you being fat, diseased & preggo

Many of those poor health outcomes cited here are due to air pollution. Much of which is transportation related. Yet today we learn EPA secretary Pruitt is seeking to undo the Obama era mileage and pollution standards and undoing California's ability to set our own higher standards. This is going in the wrong direction!

Seeking to undo the legacy of Obama based solely on the hatred of the right for our first black president and little else, at least having to do with science that resembling facts is dead wrong. As it is, Pruitt, in the fullness of his ideology and ignorance of science is bent on changing the agency into the "Environmental Pollution Agency."

Killer air needn't be considered collateral damage for the prosperity of some or the ideological victory of the current Obama hating administration but that's what this is about. In his advocacy, his claims are based, not on science but on his ideological perspective and that of our low information president who appointed him. Responsible citizens need to oppose these attempts at circumventing environmental protection. With among the worst air in the nation we stand on the front line of the battle for cleaner air.