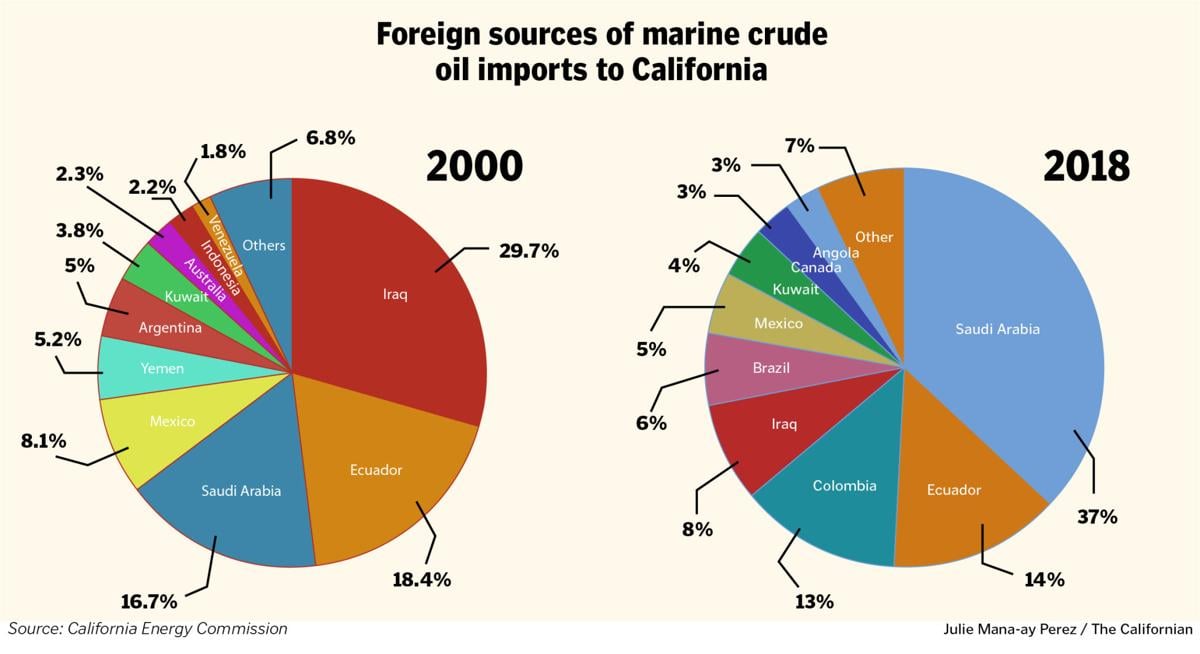 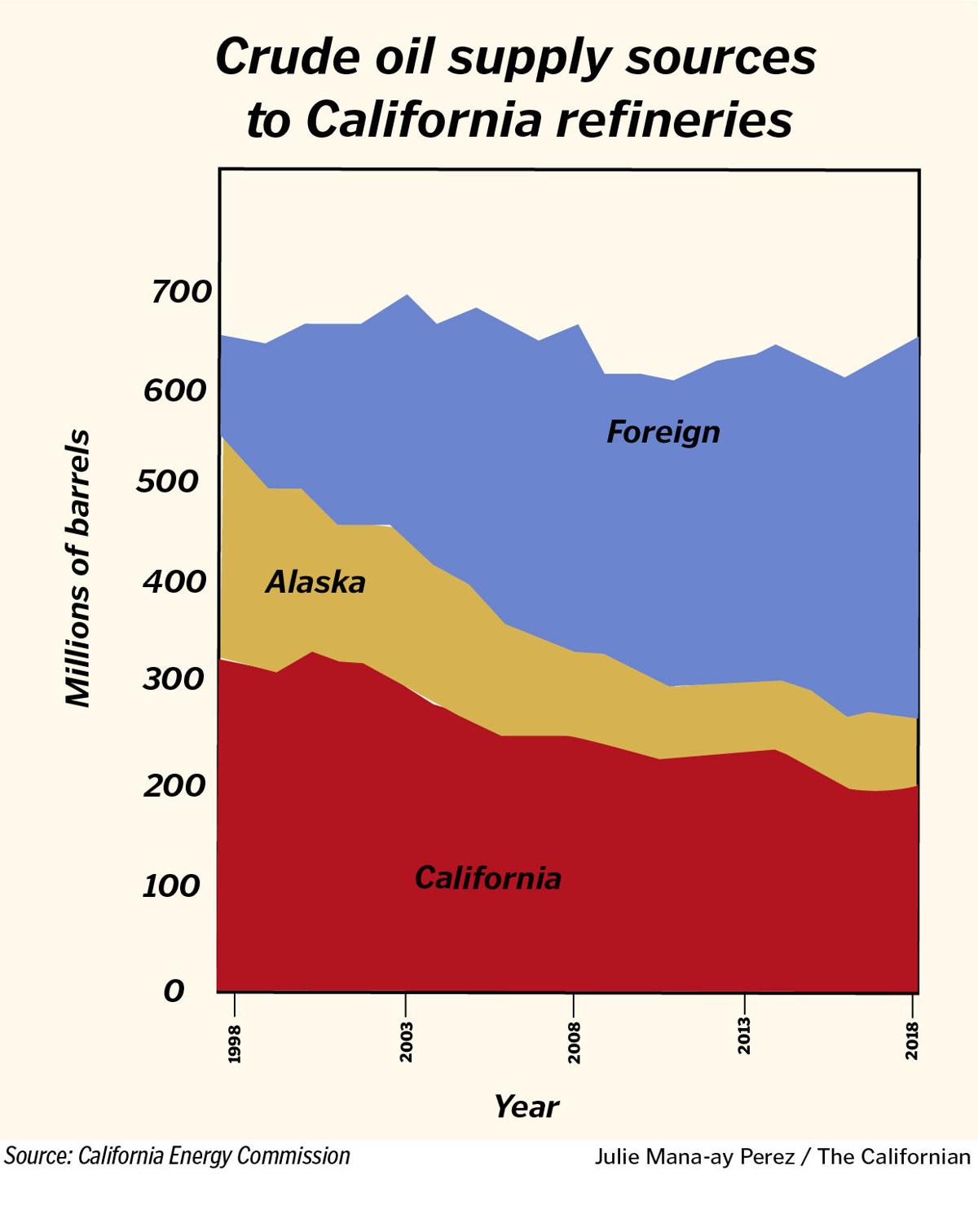 California's plan to curtail in-state oil production as a way of reducing greenhouse-gas emissions relies on questionable economics and might not be the wisest path to achieving climate-change benefits, according to several economists familiar with the proposal.

They contend that cutting the state's oil supply will simply force California refiners to import more foreign petroleum using tankers, which burn some of the world's most polluting fuel.

The state's policy would yield some modest benefits, economists say: Reducing the world's oil supply would cause fuel prices to rise incrementally and prompt some consumers to use less gasoline. Also, California's oil has a relatively high carbon content and so turning to other sources would probably mean cleaner emissions overall.

But economists and others point out there's an additional price to be paid for buying more oil from overseas. California's petroleum industry must abide by some of the strictest health, safety and environmental regulations in the world, so in that respect increasing imports may be a step backward.

A smarter approach, some economists assert, would be to leave supply alone and focus on cutting demand for petroleum, such as continuing to promote the use of electric vehicles.

The state Division of Oil, Gas and Geothermal Resources on Tuesday announced a moratorium on new permits for high-pressure steam injections in California oil fields, as well as additional layers of scrutiny for the permitting of "frack" jobs in the state and the likelihood of new regulations to safeguard people living near oil and gas activities.

DOGGR's announcement of the three initiatives made prominent reference to California's goal of managing the decline of oil production and consumption in the state.

Other states would not easily be able to make up the difference if California's oil supply declines faster than demand. There are no oil pipelines traversing the Rockies, and petroleum shipments into the state by train comprised less than 1 percent of California's supply in 2018 despite a price differential favoring out-of-state crude.

Instead, observers say the most likely outcome would be still-greater reliance on foreign oil.

Those proportions changed dramatically during the subsequent 20 years. In 2018, in-state production made up 31 percent of California's refinery feedstock, Alaskan oil accounted for 11 percent and foreign producers provided 58 percent.

Local politicians see the state's efforts to cut its oil supply as not only exporting jobs and money but also financially supporting countries less vigilant about health and safety.

"Today's announcement," state Sen. Shannon Grove, R-Bakersfield, said in a news release issued shortly after DOGGR released its regulatory plan, "simply means the Golden State will rely on more of our oil supply shipped in from foreign countries whose environmental policies and humanitarian treatment are far below California's standards."

One such critic is Mark Evans, professor emeritus of economics at Cal State Bakersfield. A longtime observer of Kern's economy, he acknowledged something should be done to lower global carbon emissions but that eliminating oil drilling in California "only affects where it's produced."

"To say how moral you are by simply buying the (oil) from Saudi Arabia instead of here may feel good, but it's not doing anything in terms of the real global problem," Evans said. He said transporting greater quantities of oil around the globe, and therefore increasing the use of the dirty bunker fuel that powers tankers, would bring a net increase in emissions.

Meanwhile, he asserted Kern would suffer a "shock to the economy" under the state's anti-oil policy, losing what one recent study says are 23,900 direct and indirect petroleum-related jobs in the county. The local housing market would also be hurt, as would state and local oil tax revenues estimated at $925 million annually.

Another view holds that California oil production is already in decline — as is the state's demand for gasoline — and so the state's policy is little more than a continuation of existing trends.

Gordon Schremp, senior fuels specialist at the California Energy Commission, pointed out that production from California's aging oil fields has fallen 23 percent since 2011, even as other states' production is rising. He said the state's rate of gasoline consumption is down more than 1 percent from 2018.

Both trajectories are expected to continue, along with shifting consumer attitudes about living near their places of employment, Schremp added.

"We'll see what happens going forward, but I think ... consumers are making choices on new vehicle choices and making choices on where to live and all those things are having an impact on demand" for gasoline, he said.

Stanford economics professor Frank A. Wolak, noting conventional and unconventional oil resources in the state remain to be exploited, disputed the assertion that California oil production is bound to decline as steadily as it has.

He pointed out that in-state oil supply is declining much faster than demand, and that while California refiners buy more oil from outside the state, consumers are buying more gasoline refined in other states.

"Both of these factors are likely to lead to more greenhouse gas emissions moving this oil and gasoline to California," he said by email.

That would mean the price of oil — a global commodity whose value is generally independent of local conditions — would not increase appreciably, thereby undercutting the goal of environmental activists hoping higher prices will spur a widespread migration to electric vehicles.

Kolstad's argument is basically that it would be wiser to concentrate on cutting demand, not supply.

"It would be far more effective to take steps to reduce California oil consumption, which is one of the consequences of the state's pushing electric vehicles," he wrote.

In August of last year, UC Berkeley economics professor Severin Borenstein posted a blog titled "Should California Keep Its Oil in the Ground?" In it, he made the point that California produces less than half of 1 percent of the world's oil supply. Taking that out of the picture, he argued, would only "slightly increase" global prices.

Borenstein's blog referred to a 2018 study by the Stockholm Environment Institute titled "How limiting oil production could help California meet its climate goals." That report found that, for every barrel of California oil taken out of production, somewhere between two-tenths and six-tenths of a barrel would not be made up elsewhere.

SEI said this deficit would elicit a small but measurable increase in global prices, which was viewed as a positive outcome for persuading people to use less oil.

The resulting lost income for California oil producers, stated in terms of greenhouse-gas emissions eliminated, would be between $110 and $330 per ton. As Borenstein noted, that's many times more expensive than some other methods for achieving emission reductions.

Moreover, Borenstein calculated that this strategy of cutting California oil production would basically shift petroleum sales revenue — $510 for every ton of emissions abated — to oil producers outside the state and the country.

As for the argument by SEI and others that California would be acting as a role model for other governments considering scaling back their oil production, Borenstein was skeptical that foreign oil-producing regimes, at least, will follow suit.

He, like other economists, advised focusing more on reducing demand than cutting supply.

"Instead of taxing the world's oil consumers to hand that money to a small group of rich and largely anti-democratic leaders, California should be focused on developing alternatives that make it easier for consumers to break their addiction," he wrote.

"A good place to start," he continued, "would be with California's own growing addiction."

Dats what Dey call yo chickens coming home to roost for dem folks dat been brought us and our children THe nastiest pollution profile in America. Yaaaay. Bakersfield is Number One. Congratulations for the the comprehensive poisoning you have expertly provided us. Well done. NOW maybe y’all finally might get it through ya dense nuggets that u ain’t the boss. Tail no longer wagging the dog. Money no longer rules the Cali oil roost. Lol. Tell me, how do you like them apples? Tasty, ain’t they?

There are much, much better places in America to live other than Bakersfield. Leave......

Guess dem apples be Tastin’ mighty sour according to dat reaction. I have a 2nd home in da Bay Area. A tad mo sophistimicated than The Field. Differentiations “dispersement” of how da folks here settled. Most not from da Dust Storm pilgrimage. Lol. But I hang my hat here to help the community, know wat I be sayin’? Way u all do wit out Mr. Knowitall to guide yo somewhat misguided souls n direction of mind? I call it a public service ya might say. Lol

I agree with the local Sierra Club guy this time.

As some here have observed, reducing demand vs. cutting supply would be far more effective and cause fewer problems in moving California's population away from carbon based energy. It's not a good idea to feed the economies of countries whose leaders hate us and whose practices aren't accommodating to sound resource extraction practices. Simply slowing or stopping California domestic oil extraction without addressing the other issues would only encourage options and practices that would not result in better air quality and a safer environment.

Considering our county's notoriously poor air quality it's a "no brainer" that the county and the several cities in our county should be encouraging planning and development to focus on denser and infill city development while discouraging sprawl development with its requisite increased commute distances and time that goes with more demand for road construction and added air pollution to say nothing about wasted time commuting.

They should be both requiring and incentivizing the installation of public and private EV charging stations and continue to improve public transportation options. In short, with a continuously growing population impacting the quality of the environment we live in, we need to stop looking backwards or over simplifying solutions to today's and tomorrow's problems.

If Newsom thinks the Saudis or other OPEC countries wouldn't ramp up production immediately he's kidding himself. A blip is all it would be. If we want to get serious about carbon we need to remember it's a cycle and one of the biggest storage reservoirs is the soil. There are many farming practices that build organic matter and a 1% increase in organic matter across the farm fields of CA would result in an enormous amount of carbon being removed from the atmosphere.