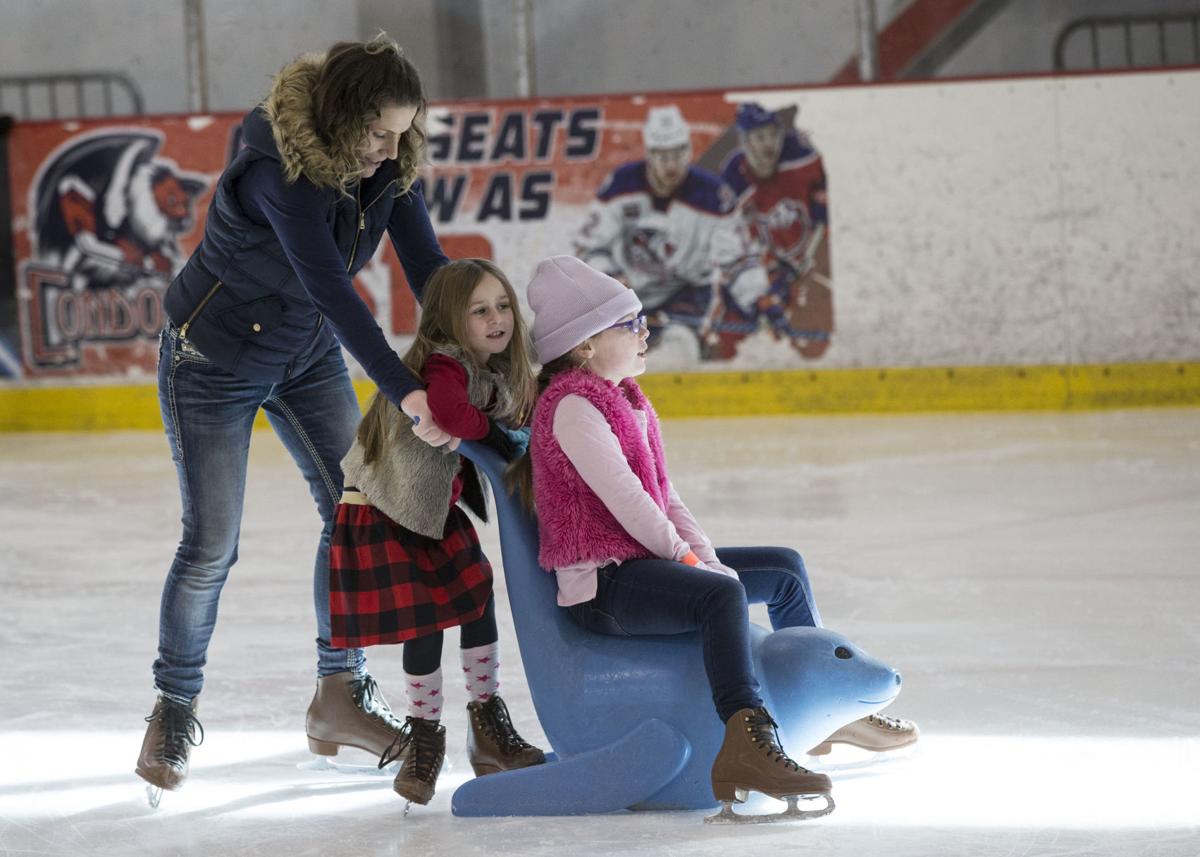 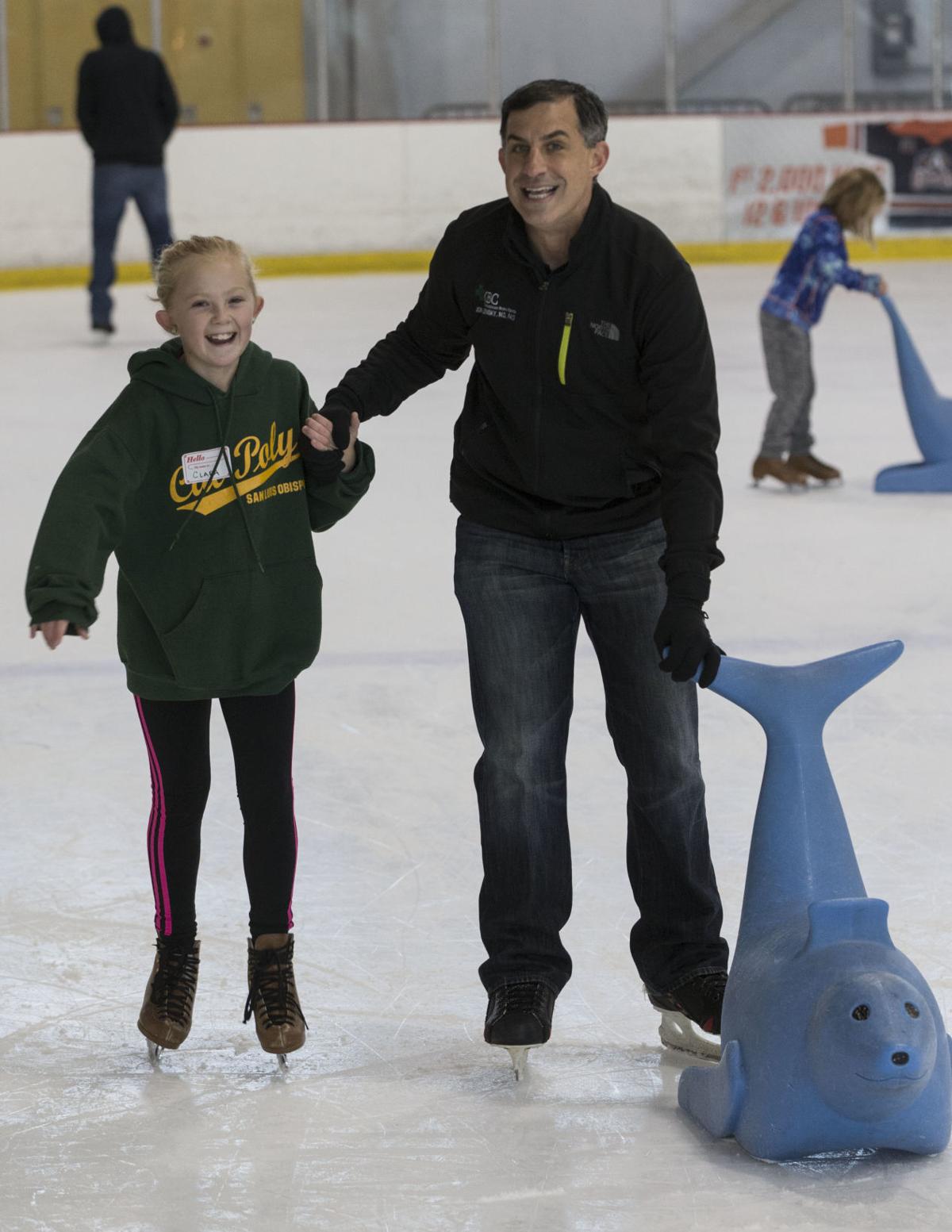 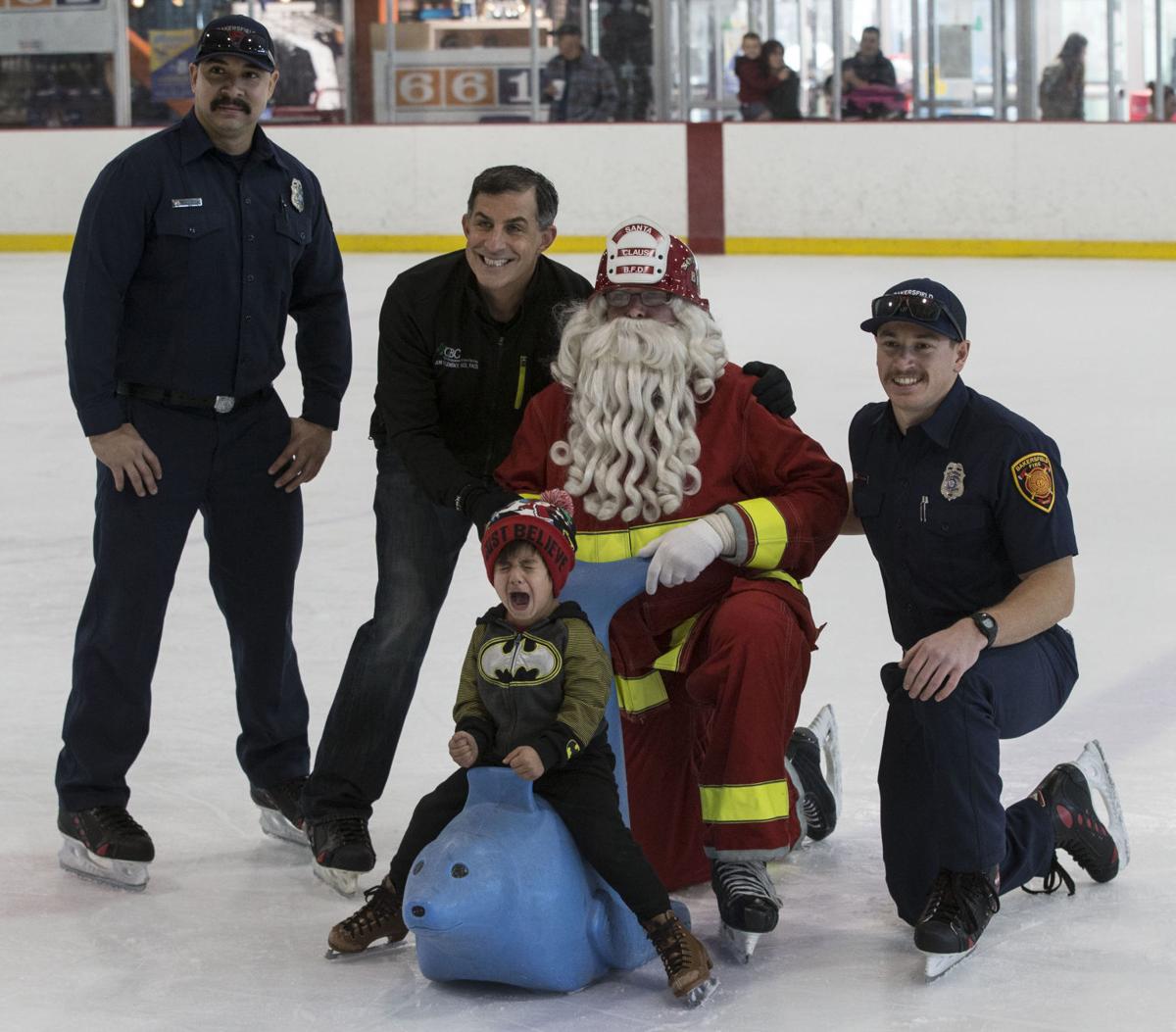 Bakersfield firefighters, along with Santa Claus, Dr. Jon Wilensky, second from left, and burn survivor Max Davis, 4, pose for a photograph during the Grossman Burn Center's third annual burn survivor Christmas party Saturday at the Valley Children's Ice Center of Bakersfield. Max was upset that he had to stop for a photograph and was not being pushed around on the ice. 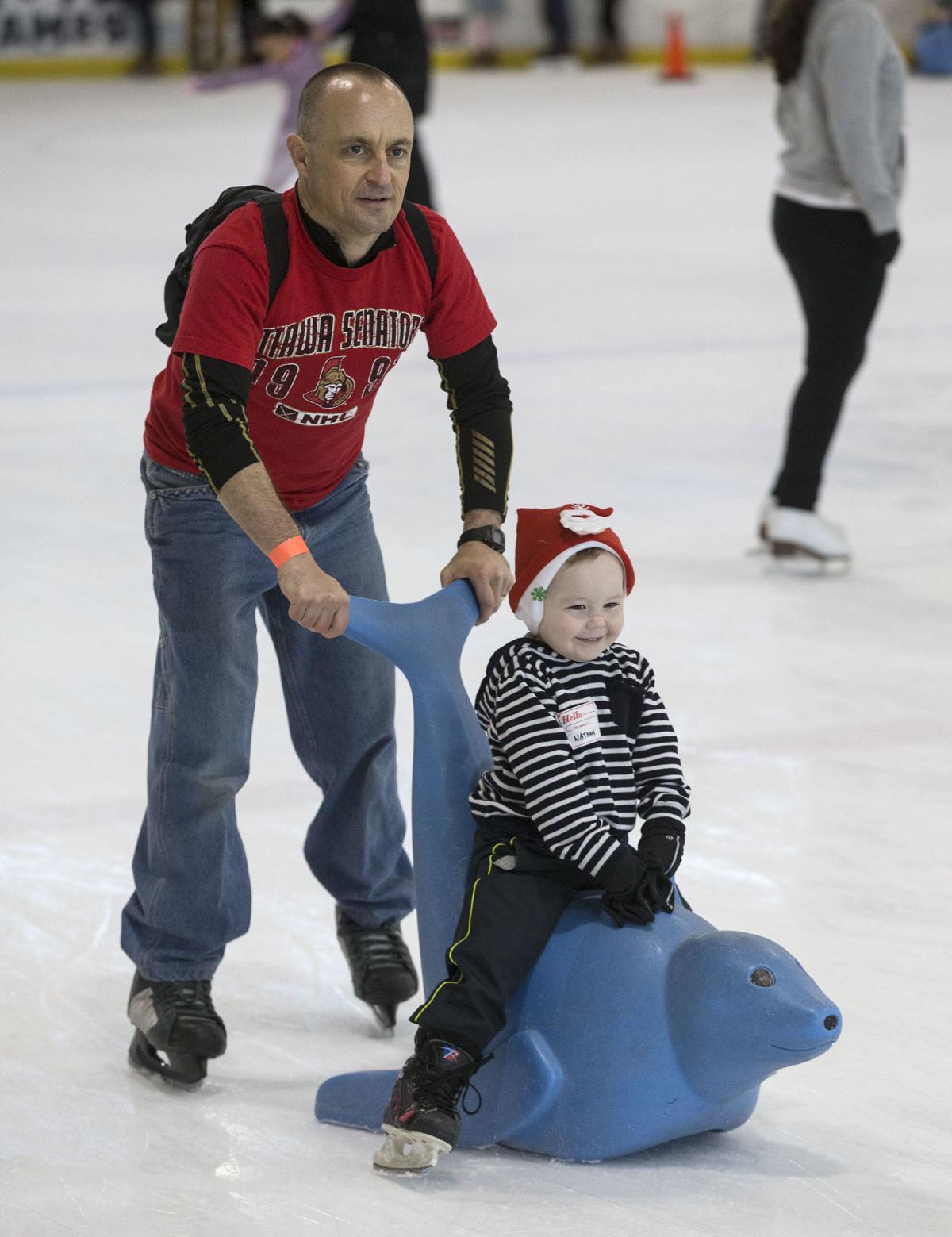 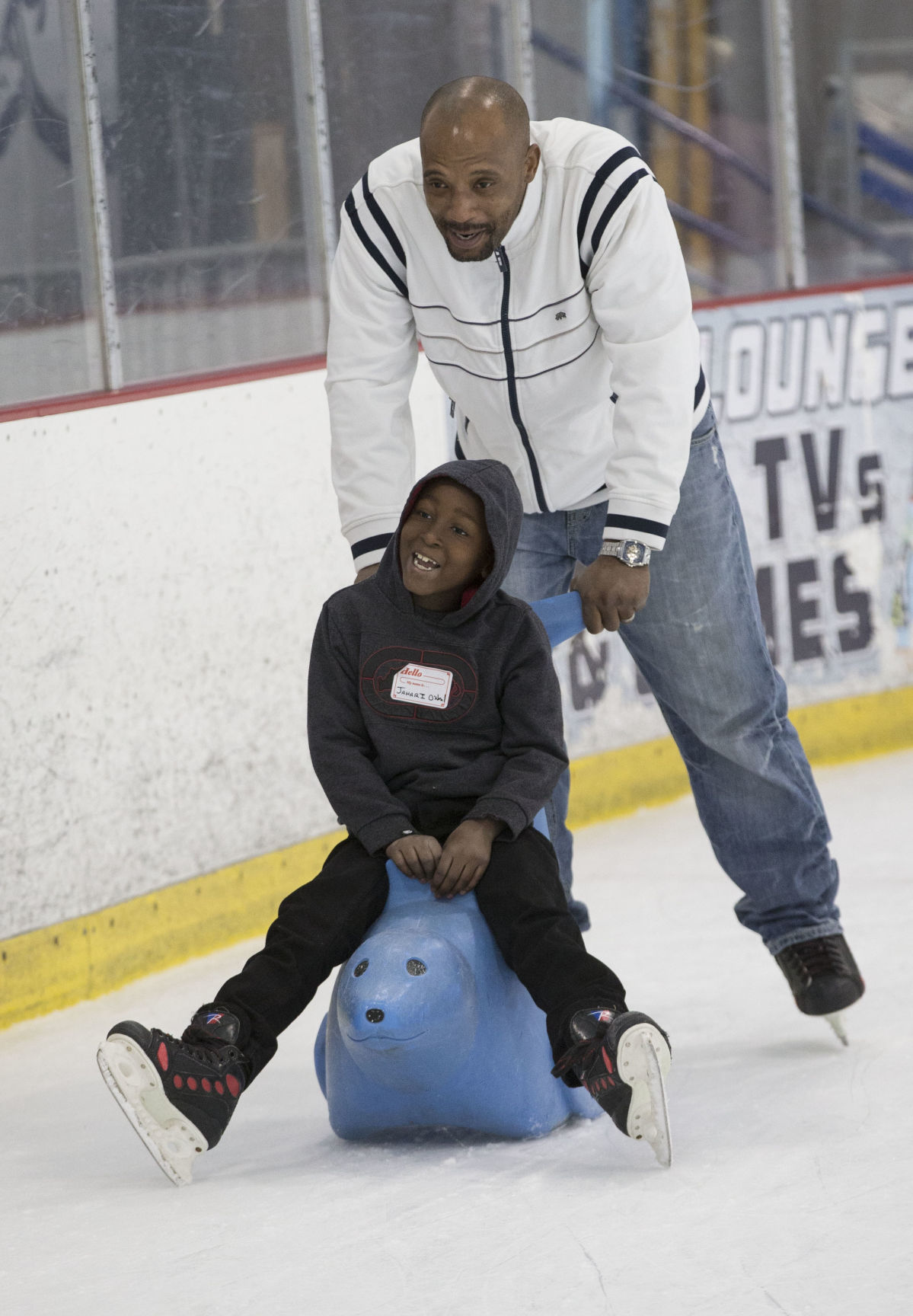 Bakersfield firefighters, along with Santa Claus, Dr. Jon Wilensky, second from left, and burn survivor Max Davis, 4, pose for a photograph during the Grossman Burn Center's third annual burn survivor Christmas party Saturday at the Valley Children's Ice Center of Bakersfield. Max was upset that he had to stop for a photograph and was not being pushed around on the ice.

The 7-year-old Bakersfield boy had never been skating before, but he had arrived at the Valley Children’s Ice Center of Bakersfield intent on taking a spin on the ice for the first time.

His goal: “Just have fun,” he said shortly before his father, Otis O’Neal laced up his skates.

As he stepped onto the ice, he tested the slickness of the rink, clutching the wall.

Then he promptly fell down, sending a surprised gasp from his family standing by.

He was picked up — shaken, but smiling — by Jon Wilensky, a plastic surgeon at Memorial Hospital's Grossman Burn Center, who took Jahari around the rink, carefully holding him upright.

“This, for me, is the reason I do what I do,” Wilensky said.

Wilensky had operated on Jahari about a year before, when the boy had been admitted to the burn center after his family said he suffered an accident that left him with burn scars in areas normally covered by his clothing.

Jahari, along with about 30 other burn survivors, who were mostly children, had been invited by Dignity Health to attend a Christmas party at the ice rink for an afternoon of skating, snacks and a photo op with Santa Claus.

“It serves as a great reunion between patients who have received care in our outpatient and our inpatient units, reuniting them with their burn surgeons, their doctors, their nurses and the staff that took care of them while they were with us,” said Dignity Health Communications Specialist Jessica Neeley.

Dignity Health has held the event for the past three years, but this was the first time it had been held at the Ice Center.

“This is just the perfect venue,” Wilensky said. “It’s a very physical activity. We have food, we have Santa, we have gifts. It’s just a really good thing for the kids.”

He mentioned the most common types of burns treated by the center were scalds from hot liquids like hot chocolate or a cup of noodles, and contact burns from accidents like children touching a stove.

“It just takes a millisecond to sustain a really bad injury,” he said.

But in the lights of the ice rink, burns were the last thing on the children’s mind. Parents, too, seemed to enjoy bringing their kids to the Christmas party.

“It helps make the children feel like children,” said Jarhari’s mother, Latrice O’Neal. “They don’t get singled out.”

She had nothing but nice things to say about the Grossman Burn Center staff who treated her son.

“They are officially part of my family now,” she said.

Other burn survivors and their families also came out to enjoy the afternoon at the ice rink.

Sisters Latricia Coleman and Latasha Cain, each with children who suffered burns from hot liquids, arrived at the start of the event.

“It gives the kids something to look back at,” Cain said.

Another burn survivor, Ivy Victory, who burned herself when she spilled a cup of noodles on her lap, attended the Christmas party so she could skate for the first time.

During her time on the ice, she was all smiles.