The style for the new East Hills Mall will be a contemporary take on mid-century modern architecture. 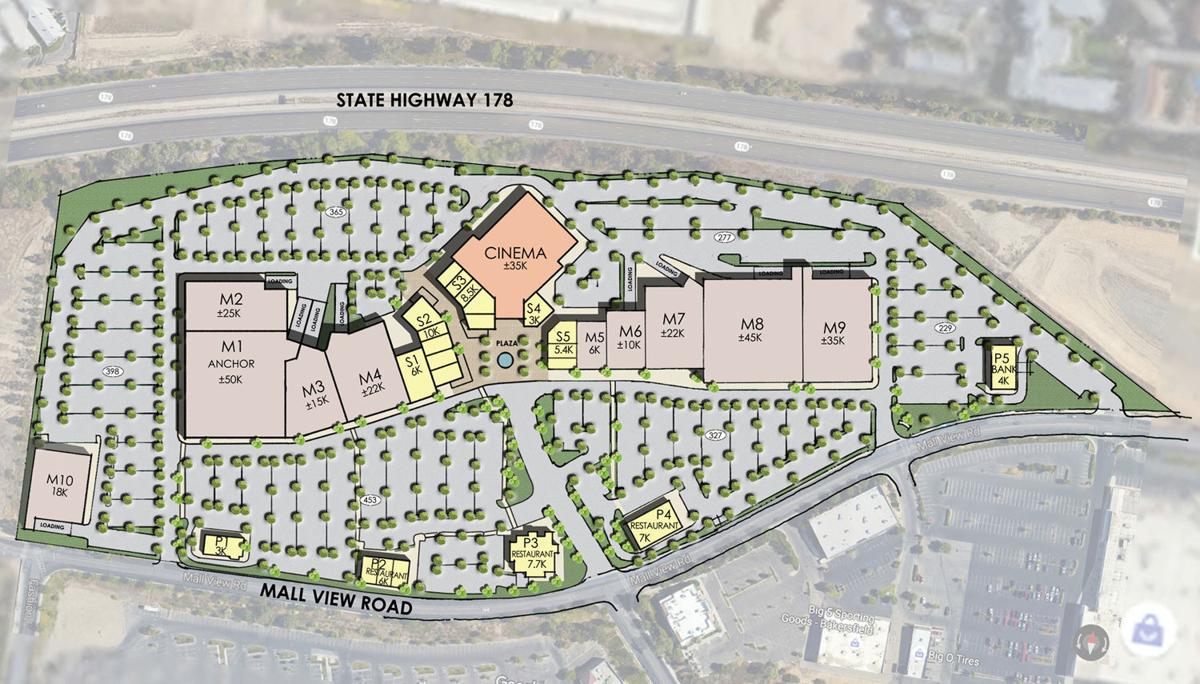 The style for the new East Hills Mall will be a contemporary take on mid-century modern architecture.

The new owners of the East Hills Mall announced Wednesday plans to renovate the property into a 350,000-square-foot "destination open-air lifestyle center" with restaurants, shopping and a brand new movie theater.

On Wednesday they described their plans for turning the faltering mall into a destination shopping center.

Their plans call for a dramatic change to the complex. The center of the mall would be demolished and converted to an open-air courtyard with a fountain anchored by the new movie theater and flanked by shops and restaurants. The theater appears from plans to sit on the same footprint as the current Regency Theaters.

“We are looking forward to providing Bakersfield and especially northeast Bakersfield an exciting, first-class shopping and entertainment experience,” Craig Carver said in a statement. “Our design inspiration is a blend of mid-century modern and contemporary-style architecture so it will uniquely stand out in the market.”

The plans show room for 10 major retail shops fronting on pedestrian walkways, not the interior space of the mall, as well as plenty of other smaller retail and restaurant space.

They show the addition of five new, smaller buildings along the Mall View Road frontage like those that typically contain stand-alone restaurants and banks in other Bakersfield shopping centers.

Carver said the owners are in lease negotiations with several national and regional retailers and restaurants as well as a national theater chain. He did not name names, which is typical before final deals are struck.

Reconstruction is scheduled to start in the "second quarter or early third quarter" of 2017 and be finished roughly a year later. Current tenants will move out by March 3, a press release said.

It said those tenants will have an opportunity to relocate to the new shopping center at current market lease rates.

The project will need city approvals before it can move forward.

Paul Johnson, a principal planner with the City of Bakersfield, said the property is currently zoned for a planned commercial development.

If the developers choose to proceed under that zoning, they would need to submit plans to the city for review and get approval by both the Bakersfield Planning Commission and the Bakersfield City Council.

If the developers choose to rezone the property, they would have to undergo a more extensive zone change process, which could include environmental review up to and including an environmental impact report, Johnson said.

He said formal plans have not been submitted to the city for review.

East Hills Mall, built in 1988, sits between Mount Vernon Avenue and Oswell Street. There are 250,000 people in the project’s primary trade area and about 500,000 people in a 10-mile radius, said Duane Keathley, senior director/principal at Cushman & Wakefield/Pacific Commercial Realty Advisors.

“This redevelopment has been a long time coming,” he said in a statement. “It’s great news for the people of east Bakersfield and for the city of Bakersfield in general. It will be an impressive retail and entertainment center.”

We should be happy that something is being done with the mall, instead of nagging about dumb small issues as traffic, everywhere anyone drives to find traffic, bako is not a small town anymore,, need to start learning to deal with the issue of a city that is growing..

Make it easier to get in and spend money and the buyers will show up....

Currently the East Hills Mall is a very difficult location to get into and out of in a decent amount of time because the parking lots for the Walmart, Target and most recently Home Depot feed right onto the major access roads to the mall significantly congesting access to the mall itself. It's NOT a pleasant experience. In my opinion, the new developers need to streamline access the mall parking lots by replacing the traditional "T" intersections where Fashion Place and New Market Way meet Mall View Road with roundabout "circle" style intersections that feed right onto the mall development property. A roundabout should also be installed where the Target parking lot dumps onto Mall View Road. Roundabouts at these points would reduce access time in and out of the mall by allowing for better flow through the development and they're better looking so they'd increase the desire of retailers to locate in the mall. It also might help to eliminate Left turns and u-turns altogether on these roads by installing decorative k-rail or high curbing. People are constantly waiting to turn left or flipping u-turns on this roads and that adds to the congestion.

Completely agree with you on the point of the access routes needing to be streamlined. The roundabout ideas would be a great addition to the flow of traffic through the shopping center. Hope there is someone on the design team for the developer that corrects not only the flow-thru streets (like, perhaps rerouting Mall View Road to be closer to what's being built-in instead of near the hills edge), but also the entrance and exit hubs to the property. Perhaps an in-out spur from the Mall View Road portion from Mount Vernon Avenue towards the north-west tip or middle point of the property, if right-of-way allows?

Still, glad to see something happening at EHM. Hope this plan turns about a result, unlike the last few attempts at revitalization there.

What about a hospital for the gunshot victims....?

just dont show up to the Eastside Johns.