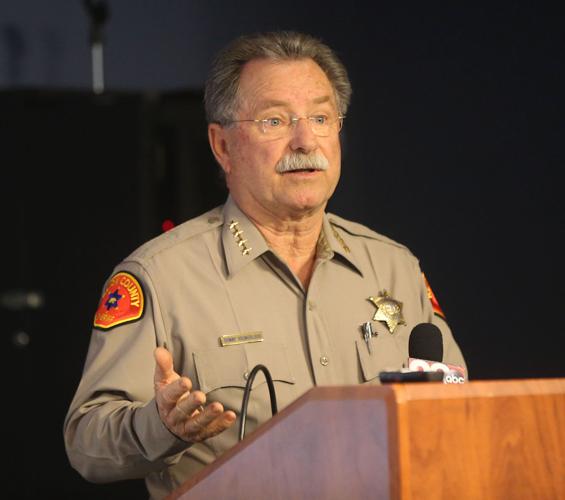 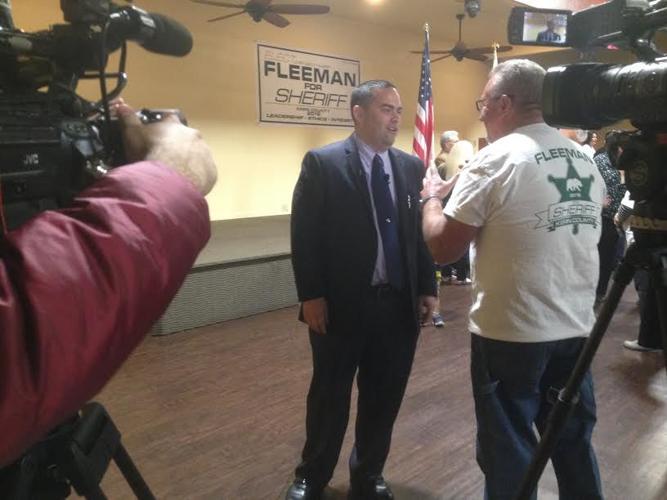 The video was shot 12 years ago during an endorsement meeting the union had with Youngblood during his successful first campaign for sheriff.

Kevin Dees, the president of KCDOA, said the group was going through the video looking for campaign promises that Youngblood hadn’t fulfilled when they came across the statements made by Youngblood.

The union is supporting Youngblood’s challenger, Justin Fleeman, in the 2018 election.

Youngblood, in response to a question about officer training, said that detention deputies are trained more extensively than they used to be because of the cost the county faces when deputies kill or injure a person.

It’s “a totally different ballgame” when it happens in a jail to an inmate who is in restraints and surrounded by multiple officers, Youngblood said.

“It’s no different than when a deputy shoots someone on the streets, which way do you think is better financially? To cripple them or kill them, for the county,” Youngblood asks.

“Kill them,” said a voice from the audience.

“Absolutely,” Youngblood replies. “Because if we cripple them we get to take care of them for life, and that cost goes way up.”

Dees called the comments callous and said they aren’t statements anyone should make.

“That seems to be something you’d hear back in the ‘60s,” he said. “I don’t believe that any of those comments reflect the thoughts of any of the men and women who put their life on the line for the public every day.”

Youngblood said his words were taken out of context.

He said the discussion centered around the 2005 in-custody beating death of James Moore — a fatality that eventually led to criminal charges being brought successfully against several Kern County detentions deputies.

He was trying, he said, to explain that when a deputy does a bad thing it’s expensive. The money comes out of the county general fund, which provides raises and pays for more deputies.

Youngblood said the county’s policy is to use deadly force only to remove a threat to life of officers or the public.

“I’ve never inferred that we should shoot to kill,” Youngblood said.

Still, he said, the words aren’t right, even though the detention deputies did choose to endorse him during that election.

“Do I wish I would have said it differently? I certainly do,” Youngblood said. “They weren’t offended back then. Still, they are my words and I own them.”

Dees said the union only endorsed Youngblood in the general election 12 years ago and considered him the lesser of two evils.

Fleeman said he learned of the video on Monday and was shocked by the sheriff’s take on shooting deaths and the ability of Kern County to buy off victims’ families.

If he was trying to explain something to officers there was a better way to say it, Fleeman said. But he said Youngblood’s service has been a terrible time for the Kern County Sheriff’s Office.

“I wish (detention officers) would have released (the video) when it happened. He wouldn’t be sheriff,” Fleeman said. “Every unit in the sheriff’s department has suffered and been hurt under his leadership.”

Fleeman also said he is worried that the video will increase the negative perception of the department in the midst of a Department of Justice excessive force investigation and news reports about incidents which have resulted in the deaths of suspects.

“I do worry about the clip that is released,” Fleeman said. “If we have another in-custody death or officer-involved shooting, I don’t know what’s going to happen to our place.”

Youngblood said that is the kind of campaign Fleeman is trying to run and that his opponent is willing to “burn down” the sheriff’s office in order to win.

Youngblood said he knew there was a video out there a month ago and that Fleeman’s campaign has a long list of similar hit pieces ready to go against him.

“They’ve made a public records request for my travel records so that’s what we’re going to see next,” Youngblood said. “Are there no ethics or integrity involved?”

He said he has dirt on Fleeman, too.

“I’ve got something I could use. I’m not going to,” Youngblood said. “I don’t feel the need to attack my opponent.”

Justin Fleeman, a chief deputy with the Kern County Sheriff’s Department, formally announced his plan to run against his boss, Sheriff Donny Y…