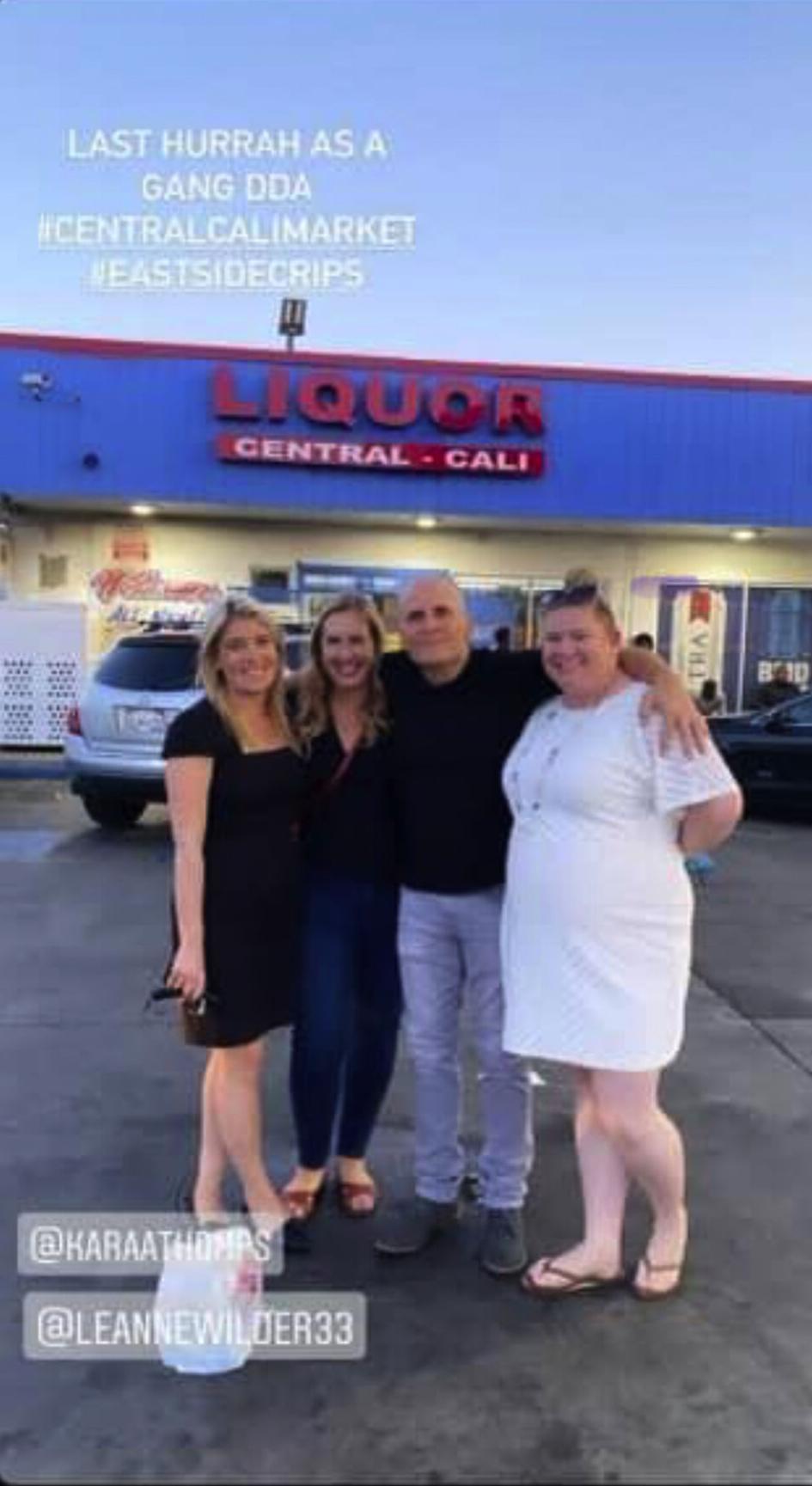 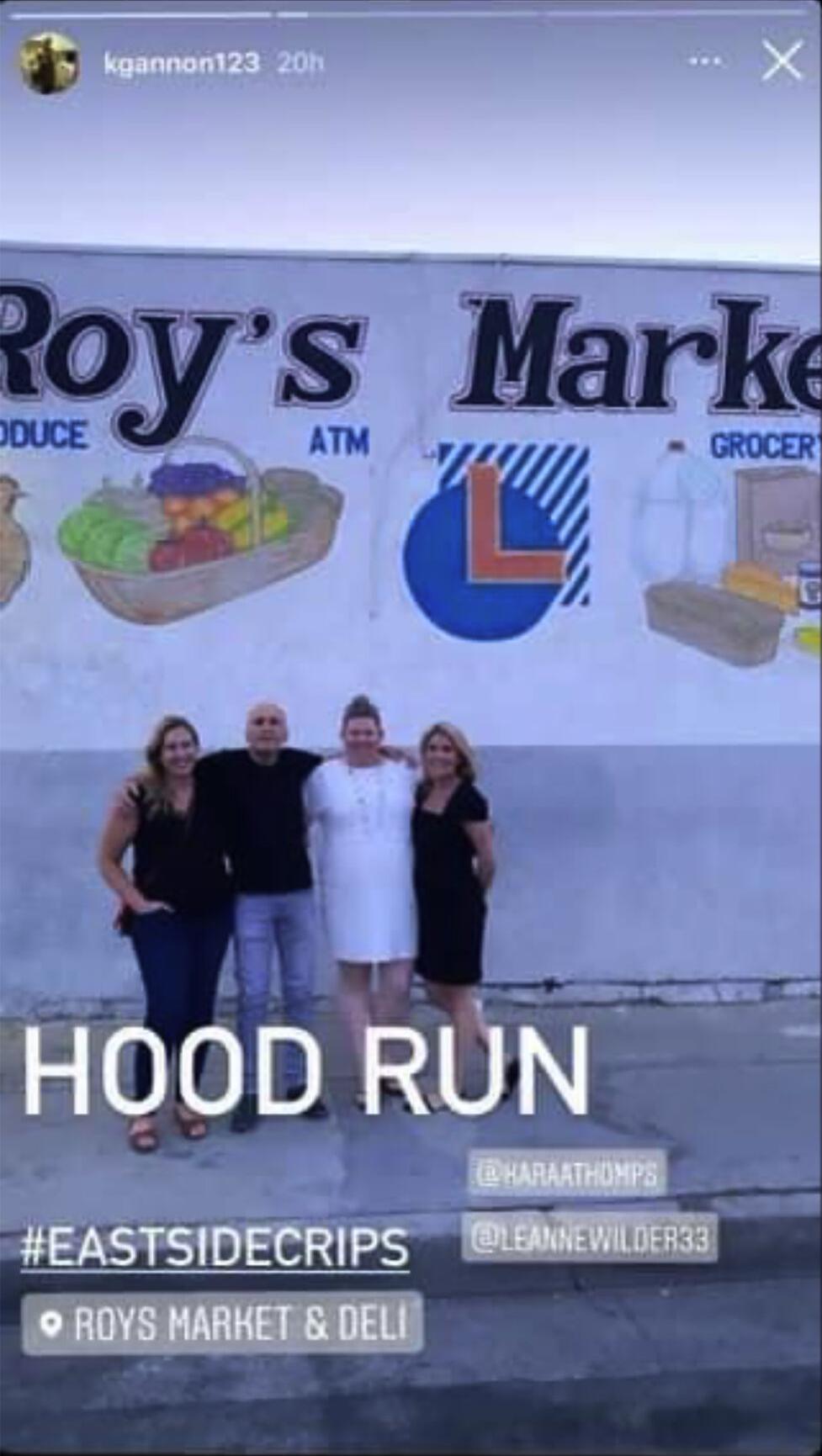 Three current and one formed district attorney's office employees are pictured in front of Hollywood Market.

Three current and one formed district attorney's office employees are pictured in front of Hollywood Market.

A group of current and former employees with the Kern County District Attorney's Office took a "hood tour" of east Bakersfield neighborhoods rife with gang violence and posted them on social media with a caption stating it was a "last hurrah" for one of the office's gang prosecutors.

In three images, three women and a man pose in front of neighborhood markets in three locations. The posts include hashtags for the East Side Crips and Country Boy Crips, which are Black street gangs that operate in those areas.

Photos of the images were posted on Facebook on Tuesday night by Joey Williams, a faith-based community organizer who helped form Faith in Action Kern County, a group of religious leaders who advocated for change at the Bakersfield Police Department.

District Attorney Cynthia Zimmer released a statement Wednesday morning condemning the posts. She called them "disrespectful, inexcusable" and "a betrayal" to the community and said her department is investigating the situation.

The attorneys in the photos could not immediately be reached for comment Wednesday.

Local attorney Elliott Magnus, who is president of the criminal defense division of the Kern County Bar Association, said he saw the posts on Instagram stories on Saturday. He said he has since learned one of the women in the photos is leaving the District Attorney's office to take a job out of town and the photos were taken during a farewell party for her. Magnus said he and other attorneys in the community, who often represent defendants facing gang charges, reacted strongly to the photos. Some colleagues likened the images to people "looking at animals at the zoo," Magnus said.

"The DA’s office puts out this vibe that they protect these communities but when you make a game out of it ... you’re really kind of tearing down that community more than anything," he said. "It’s almost kind of ridiculing that community. It’s in poor taste at the very least. And if we’re thinking of someone having a fair and impartial jury, the DA’s office should be above reproach."

The posts struck a nerve with advocates in the city's Black community.

“Greater Bakersfield is on fire and we need water to put it out, not people adding fuel to it because that’s exactly what they did,” said Xenia King, the founder of Mothers Against Gang Violence who grew up in southeast Bakersfield. "I find it to be appalling for people in positions that have something to do with our justice system to get on there and do that and bring more problems to our city.

"Our city doesn't need that going on. We need healing."

Trust has already eroded between communities of color and law enforcement, in Bakersfield and nationwide, said NaTesha Johnson, CEO of Upside Productions and a member of the Bakersfield Police Department-Community Collaborative. A group of white prosecutors posing for photos in poor, Black neighborhoods only magnifies the issue, she said.

“They're treating it as if it's some kind of pub crawl,” Johnson said of the various stops the DA’s staff in the photos made at Roy’s, Central Cali and Hollywood markets, which are scattered throughout an area where rival gangs skirmish for territory.

“We know what our nation is already going through in terms of civil unrest... We need to understand and be conscientious of all of our choices, especially if we've been put in a position to serve others,” Johnson said.

Full accountability would mean making a report public once the investigation into those who took part is finished, Johnson said.

Williams said he thinks the attorneys involved should be suspended without pay while the investigation takes place.

“If the DA, Cindy Zimmer, really condemns these actions beyond just words then she will take bold action to ensure the discipline meets the disrespectful actions of her employees and office,” he said.

District Attorney Zimmer led the office’s gang unit before she was elected in 2018 and prides herself on bringing justice to communities terrorized by gang violence. In a statement released Wednesday, she lambasted the posts.

“For decades, I have spent a career dedicated to improving and protecting areas of our county affected by gang violence. Let me be clear: It is unacceptable and inexcusable that a former employee would post something so offensive and disrespectful to the communities we work so hard to protect," the statement said. "The attitude, commentary, and behavior of the former employee does not reflect the values of the hundreds of employees at the District Attorney’s Office and does not reflect the behavior and values that I demand from all employees. I have directed a full investigation into the conduct of the former employee and others involved and will take every action necessary to ensure that such a betrayal to our community and to the values of this office are not allowed to recur.”

Joseph Kinzel, the assistant district attorney, declined to confirm the identities of the staff in the photos, citing employment rules, but he did confirm the people were staff and former staff. Policies also dictate what can and can’t be released once the investigation is completed, he said.

Visiting areas where gangs operate is part of an educational process that prosecutors new to the gang unit take part in, Kinzel said.

He acknowledged a photo recently posted on social media by the head of the gang unit, Joe Marcano, that showed Marcano and two other attorneys standing in front of a brick wall covered in graffiti. The photo is captioned: “Just another day at the office.” In the comments, Zimmer remarks on a face mask on the sidewalk next to Marcano’s feet and he responds saying it belonged to “one of the fallen homies.”

Kinzel said attorneys are “required to understand and interpret gang graffiti, and that picture was taken in that context of training how to interpret gang related graffiti.”

“Fallen homies” is a reference to graffiti, where gangs often tag a deceased gang member, he said.

“I disagree with any effort to characterize this as something on the same level as the others,” Kinzel said.

Under Zimmer, the district attorney’s office has hired more racially diverse attorneys, Kinzel said in response to a question about the make up of the office’s attorneys. Of the 83 attorneys, there are 11 Hispanic attorneys, up from four in 2018 prior to Zimmer’s election, four Middle Eastern, up from one, and three of Indian descent, whereas there were none in 2018. The office has four Black prosecutors, the same number as prior to Zimmer taking office.