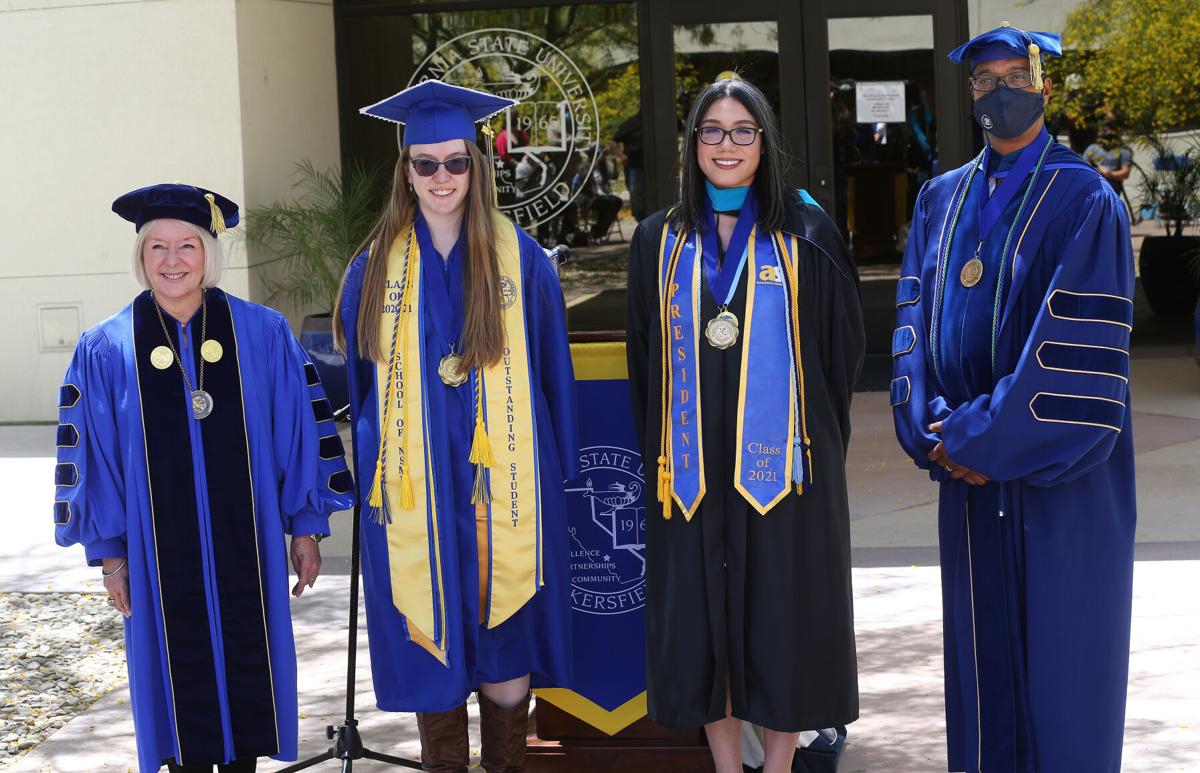 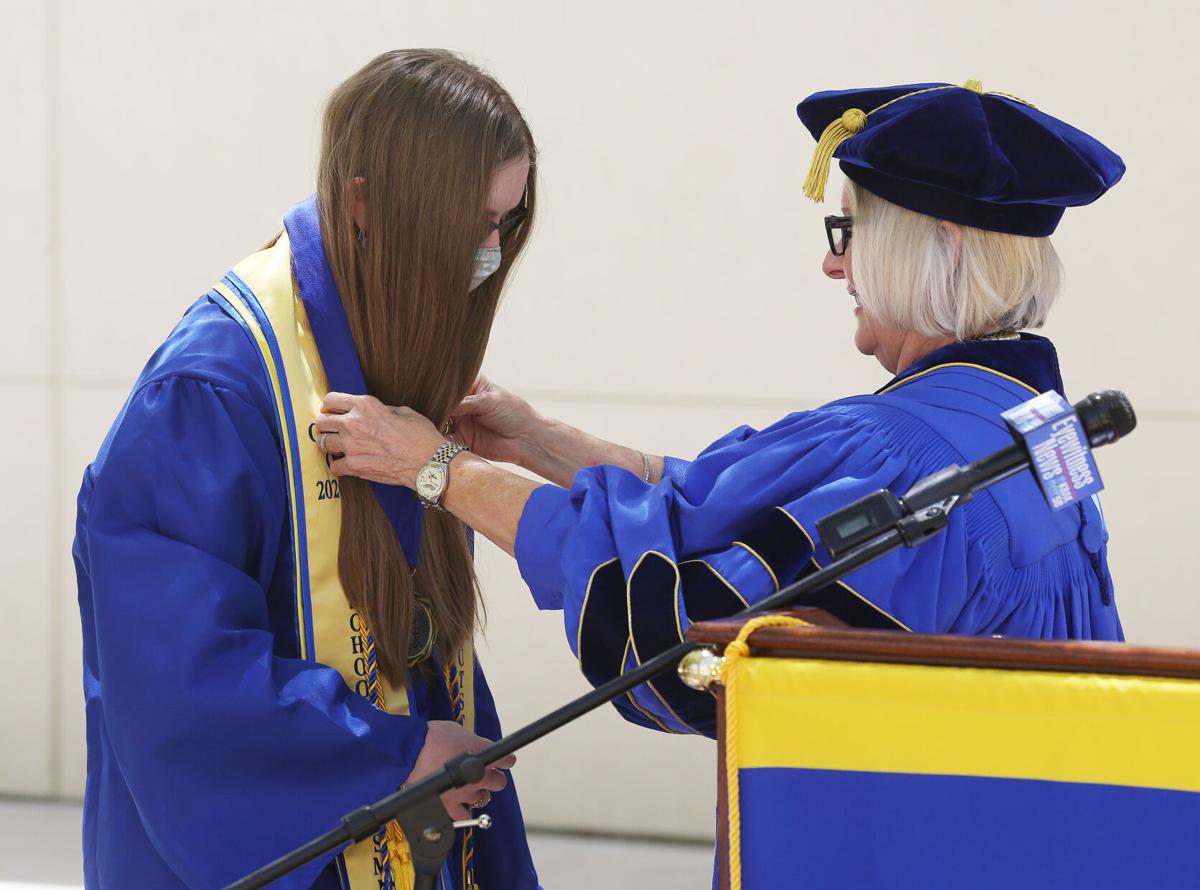 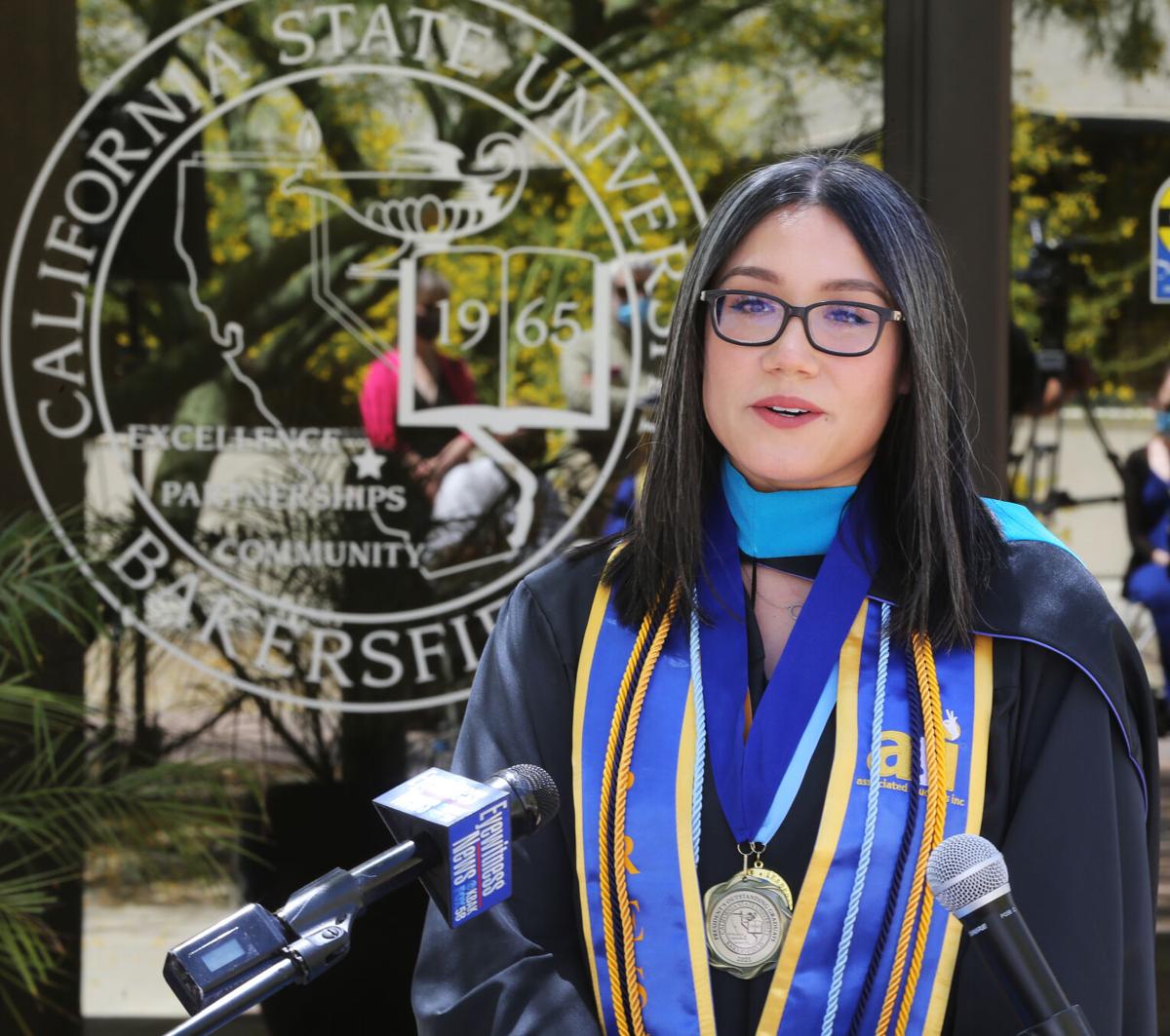 The President's Outstanding Graduate, Vanessa Chicaiza, spoke after being awarded a medal by CSUB President Lynnette Zelezny at a ceremony on campus Thursday afternoon.

The President's Outstanding Graduate, Vanessa Chicaiza, spoke after being awarded a medal by CSUB President Lynnette Zelezny at a ceremony on campus Thursday afternoon.

Both students were transfer students to CSUB with straight A's. As difficult as it is to nail a high GPA — especially during a chaotic period when classes moved online — Zelezny said she looked for more than grades to choose to award the President's Medal.

Zelezny considered students' research contributions, leadership and service, as well as what they have had to overcome to graduate. That led her to Vanessa Chicaiza, who completed her master's degree in public administration, and Emily Oliver, who earned her bachelor's degree in mathematics.

"Both have been committed to high-impact leadership and service that has touched the lives of many," Zelezny said.

Chicaiza worked often with Zelezny since she served as this year's Associated Students, Inc. president. She worked hard to advocate for students throughout the COVID pandemic, even in her research.

She looked into the long-term funding sources of computers and hotspots at CSUB for her master's paper, and said COVID revealed some of the underlying issues students had with equity and access in their education.

Chicaiza transferred from Fullerton College in Orange County, and she said coming to the Central Valley was a great decision.

"I was welcomed so beautifully with open arms," she said.

During her tenure, she worked as a legislative intern scholar through the Kenneth L. Maddy Institute and she also served in Assemblyman Rudy Salas' office.

Oliver lived in Frazier Park, and began her college career at Taft College. At one point she was taking classes at CSUB, but she made time to tutor students at Taft College in math and physics twice a week. So sometimes she would drive to all three places within the course of a day.

"It was challenging, but it was my life," she said. "Since I lived in Frazier Park, we had always had to plan out our days and plan out our trips. So it wasn't anything new to me."

She also volunteered in her mom's middle school classroom, and helps care for her older sister, who has epilepsy.

Oliver credits supportive family and like-minded friends and classmates with helping her accomplish everything on her full plate. She said having that financial, emotional and academic support made the difference.

Oliver has a job lined up. She will follow in the footsteps of her dad and both grandparents who served in the Navy. She plans to take a job as a mathematician at Navair, a Naval Weapons Facility located in China Lake that develops software for planes and missiles. She's excited to apply what she has learned with her degree to a real-world need.

"I'm not working on Amazon, where it would allow just someone to buy more shoes," she said. "I'm working on something that's going toward a cause."

Chicaiza is also following in something of a family tradition. Her late mother, Linda Chicaiza, who passed away the year her daughter began her program, also received her MPA in the CSU system: CSU Northridge.

Chicaiza's mother would tell her, "No one can take your education away from you."

And now she's hoping for a position where she can continue to do work in higher education, maybe even within the CSU system.

Getting a bachelor’s degree is always hard work, and even in a normal year most students at Cal State Bakersfield don’t have an easy road.