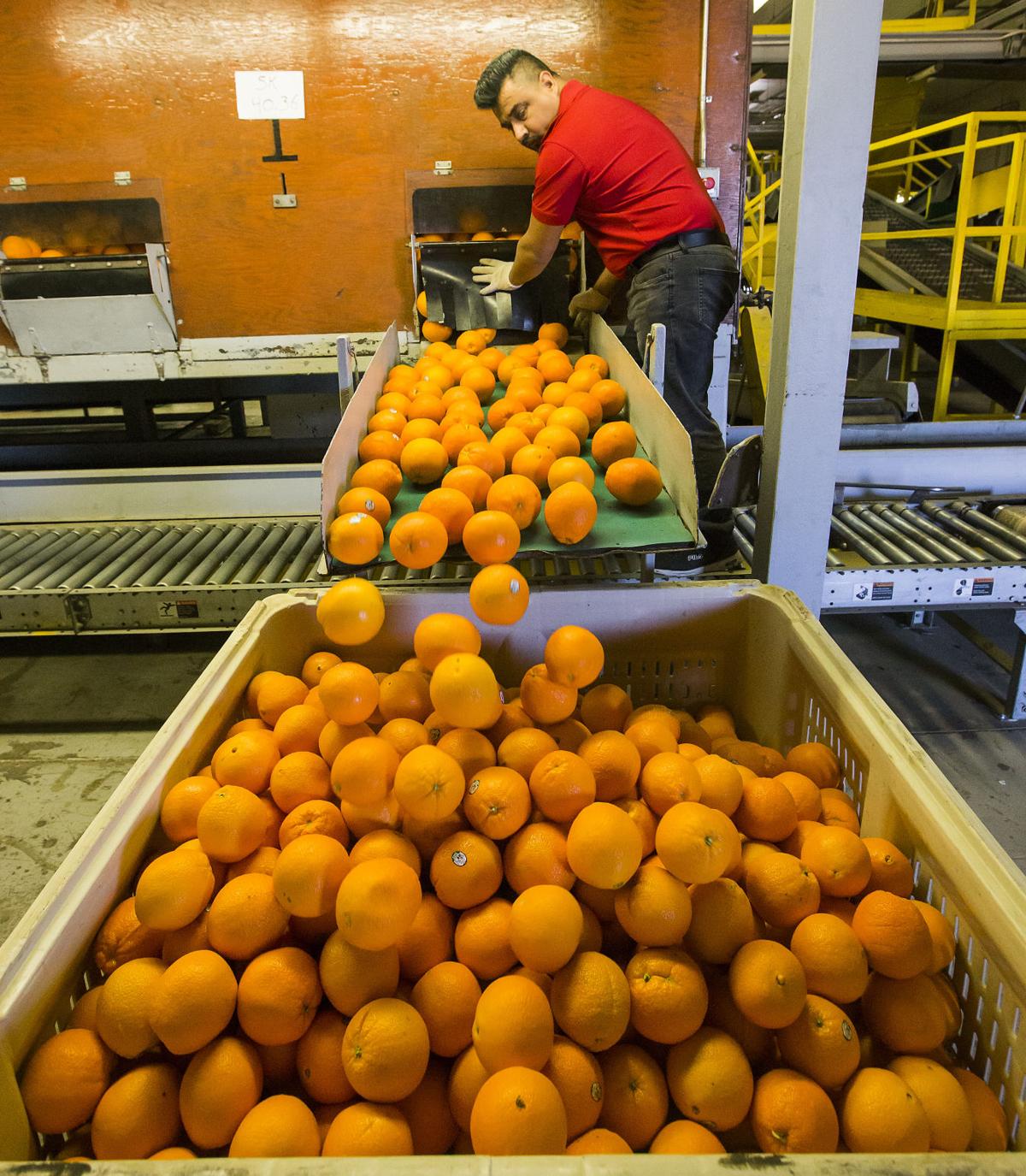 In this file photo, Pancho Cervantes loads navel oranges into a container at the Kern Ridge Growers shed near Arvin. 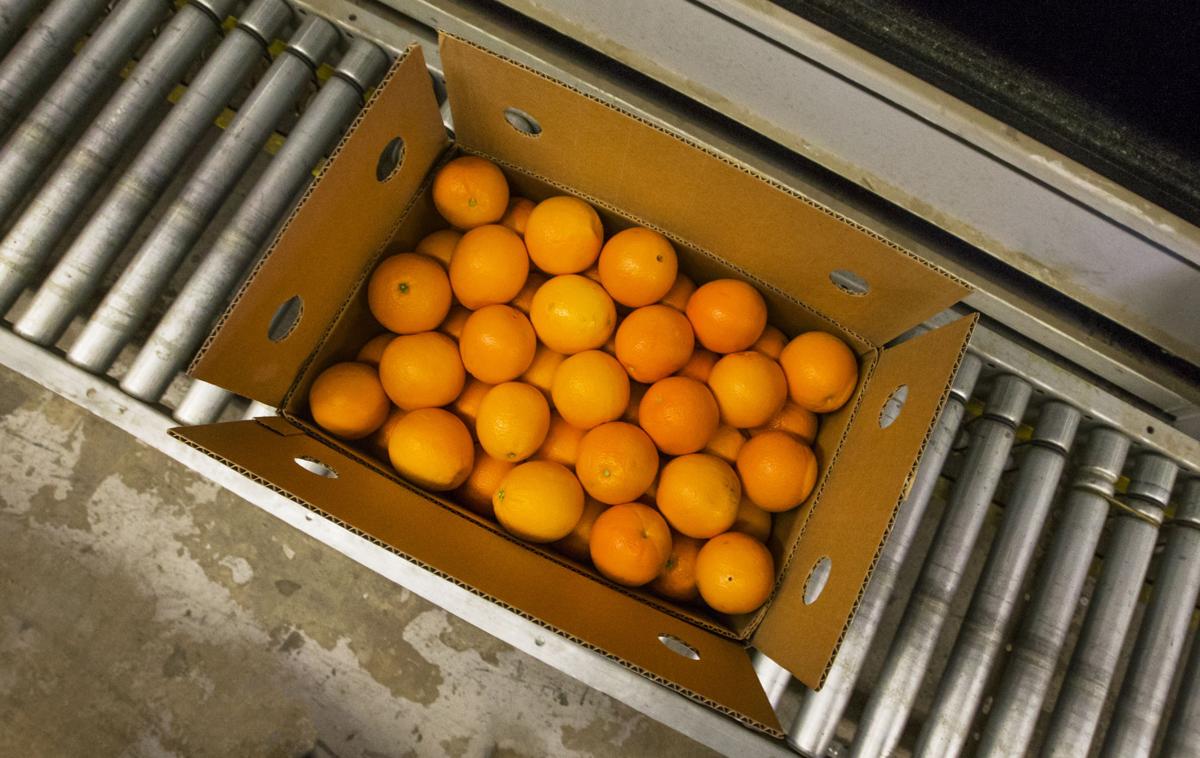 A box of navel oranges glides along rollers at the Kern Ridge Growers packing shed near Arvin. Some of the produce packed at Kern Ridge is exported to Latin America.

In this file photo, Pancho Cervantes loads navel oranges into a container at the Kern Ridge Growers shed near Arvin.

A box of navel oranges glides along rollers at the Kern Ridge Growers packing shed near Arvin. Some of the produce packed at Kern Ridge is exported to Latin America.

The California Farm Bureau Federation says it is "greatly concerned" that President Donald Trump's proposed tariffs on imported steel and aluminum could start a trade war — and the state's $21 billion agriculture export market might pay the price.

Beatris Espericueta Sanders, executive director of the Kern County Farm Bureau, seemed to agree Monday that Kern, the top-producing ag county in the nation in 2016, could potentially take a financial hit should tariffs spark a trade spat with the European Union, Mexico, Canada, China, Korea and other trading nations.

"For many Kern County growers who have top-producing commodities like almonds, grapes, pistachios, and citrus, recent actions raise concern due to agriculture being a target in the past," she said. "Our food production and revenues could be negatively impacted if retaliation occurs."

But not everyone who works in Kern's $7.1 billion ag industry agrees.

Dennis Johnston, a partner in Johnston Farms, a fourth-generation family farming operation in Edison, said he is backing the president's effort. It's time to try something different, he said, even if it results in short-term losses for his company.

"We do a lot with Korea," said Johnston, whose family planted its first navel oranges here in 1963. "Even though we supposedly have a free trade agreement with Australia and Korea, there are non-tariff trade barriers."

South Korea, for example, requires produce from the San Joaquin Valley to be fumigated for Septoria, a fungi that causes leaf spot diseases on field crops and other plants.

"The citrus growers in Korea have a very powerful lobby," he said. "China is the same way."

Such requirements are used to cut into profits, making exporting to those nations riskier and more difficult.

The playing field is not level, Johnston said. Another example is Mexico and its radically lower cost of labor. Farming companies in California must pay workers a wage that is much higher than farm workers are paid in Mexico.

If the steel tariffs are enacted and a resulting trade war makes Johnston's premium fruit too expensive to export, is he willing to take the hit?

"Sure, if it's short term," he said. "But I'm convinced things would be worked out very quickly."

As a politician with an agricultural background, Rep. David Valadao, R-Hanford, represents a lot of growers in his district. Sometimes Valadao finds himself walking a thin line between hard-right conservatives in his own party and moderate Blue Dog Democrats on the other side of the aisle. Trump's leanings toward a protectionist trade policy may have placed Valadao again in the precarious middle.

"The Central Valley produces billions of dollars in agriculture products each year," Valadao said in a statement Monday. "Ensuring United States' trade policies and agreements boost American exports and benefit American workers, manufacturers, farmers, and job creators, especially those here in California, is absolutely critical. I will continue working to ensure our trade policies best serve the interests and prosperity of the Central Valley."

“Our community’s contribution to the country and world food market is second-to-none," he said in an email. "I have seen firsthand the benefits free trade has provided California’s farmers and ranchers, including in Kern and Tulare Counties. That is why I am working with the administration to open more markets for our growers."

McCarthy said the president’s recent trade policy announcement is targeted to steel and aluminum, and is in response to unfair trade practices that threaten American industry.

"It should be noted that American products — particularly agriculture products — are some of the safest and most abundant in the world. Reducing U.S. imports through retaliatory measures would have adverse impacts on other countries' economies as well. Nobody wins with retaliatory measures, which is why I would urge our trading partners to come to the table and work with the president and Congress to address the steel and aluminum trade issues and make a more fair and open trading system. And, I firmly believe that when Americans are provided a level playing field, we can compete with anyone."

But the National Association of Wheat Growers and U.S. Wheat Associates in a joint statement said the steel industry "is already among the most protected in the country."

For Kern County, the stakes are high.

According to the Agriculture Issues Center at UC Davis, for every 100 jobs linked directly to the agricultural industry, an additional 106 jobs are created in the local economy.

In Kern County, 1 in every 5 jobs is related to agriculture, and every dollar generated by value-added ag — such as processed "baby carrots, packaged salads, and vegetable and fruit juices — leads to an additional $1.27 generated by the region’s non-agriculture economy.