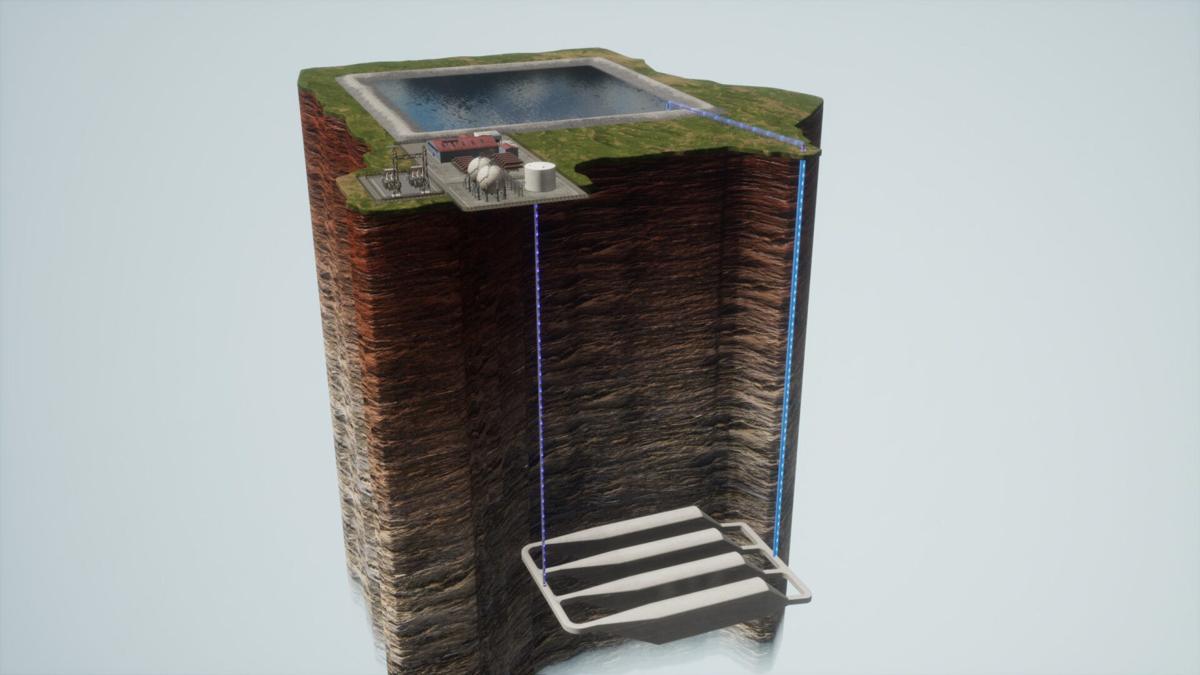 The project announced Thursday would put an estimated 800 people to work during peak construction then employ the equivalent of up to 25 full-time workers while providing half a billion dollars in indirect economic benefits.

Though still very early in the process — a senior Kern County official was unaware of the proposal Thursday — the project could be a welcome diversification of the state's stored-energy portfolio, which according to the California Public Utilities Commission needs to expand three-fold to reach the goal of 10,000 megawatts of storage by 2030.

At its heart the project is an attempt to make renewable energy from solar and wind generation available when the sun isn't shining and the wind isn't blowing.

The development partnership behind the project — led by Toronto-based Hydrostor with Meridiam and Pattern Development — say surplus or off-peak energy would run a compressor producing heated, compressed air. Heat would be removed from the air stream using proprietary technology and be stored for use later in the process.

Hydrostor says it's clean, safe and reliable energy that uses only air, gravity and water. If all goes well the project could open by 2026, complementing projects underway elsewhere in the United States, as well as in Canada, Chile and Australia.

Customers would include the Los Angeles Department of Water and Power and the operator of the state power grid, California Independent System Operator.

The project's price tag was not available, but it and a similar project providing the same amount of storage capacity at an undisclosed site in the Central Valley by the same partnership were estimated to cost a combined $1.5 billion.

By itself the Rosamond project would offer capacity exceeding all other compress-air energy installations worldwide.

“Only a handful of (compressed-air energy storage) projects have been deployed worldwide, amounting to just over 300 (megawatt-hours) total," Larissa Y. Fair, marketing and communications director for the U.S. Energy Storage Association, said by email. "Their successful completion would represent a historic, seismic change in the bulk storage landscape.”

Part of what makes the project valuable is its novelty. Diversification is lacking within California's energy-storage portfolio, said Michael Gravely, senior electrical engineer and team lead in energy storage research at the California Energy Commission.

He said compressed-air projects are more efficient than conventional power plants but not as efficient as batteries, which generally don't discharge for more than six hours — half the duration Hydrostor's project would deliver electricity at full capacity.

Gravely noted Hydrostor's project would greatly exceed Hydrostor's current capacity of less than 5 megawatts. But the technology presents few risks and seems to be feasible if it can find financing.

"It's good technology. It's a good proposal" he said. "I hope you guys are lucky and I hope they get it done."

Hydrostor said development work including site control, transmission interconnection and engineering are all well along, with permitting activities already underway.

Lorelei Oviatt, director of Kern County's Planning and Natural Resources Department, said she has not yet seen the company's project but that she is eager to review it.

"It sounds intriguing and we look forward to them obtaining the correct permits through the Kern County Planning and Natural Resources department," she said by email Thursday.