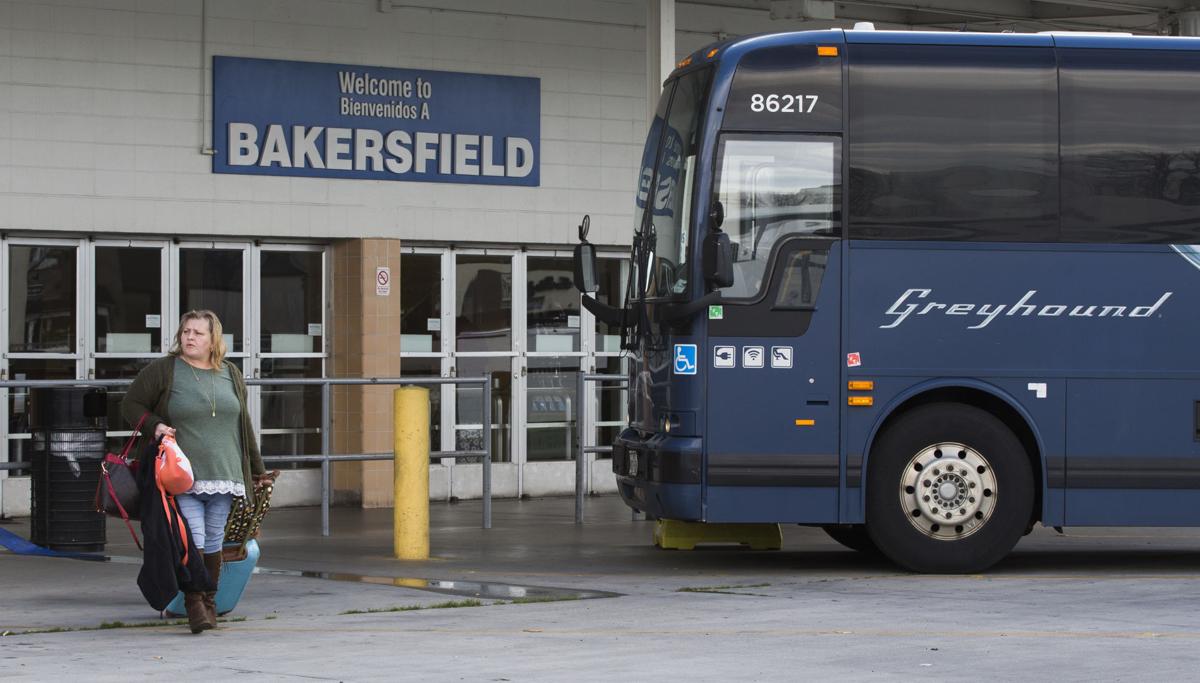 Greyhound Lines offers a nationwide network of bus stations. A passenger arrives in Bakersfield in this file photo. 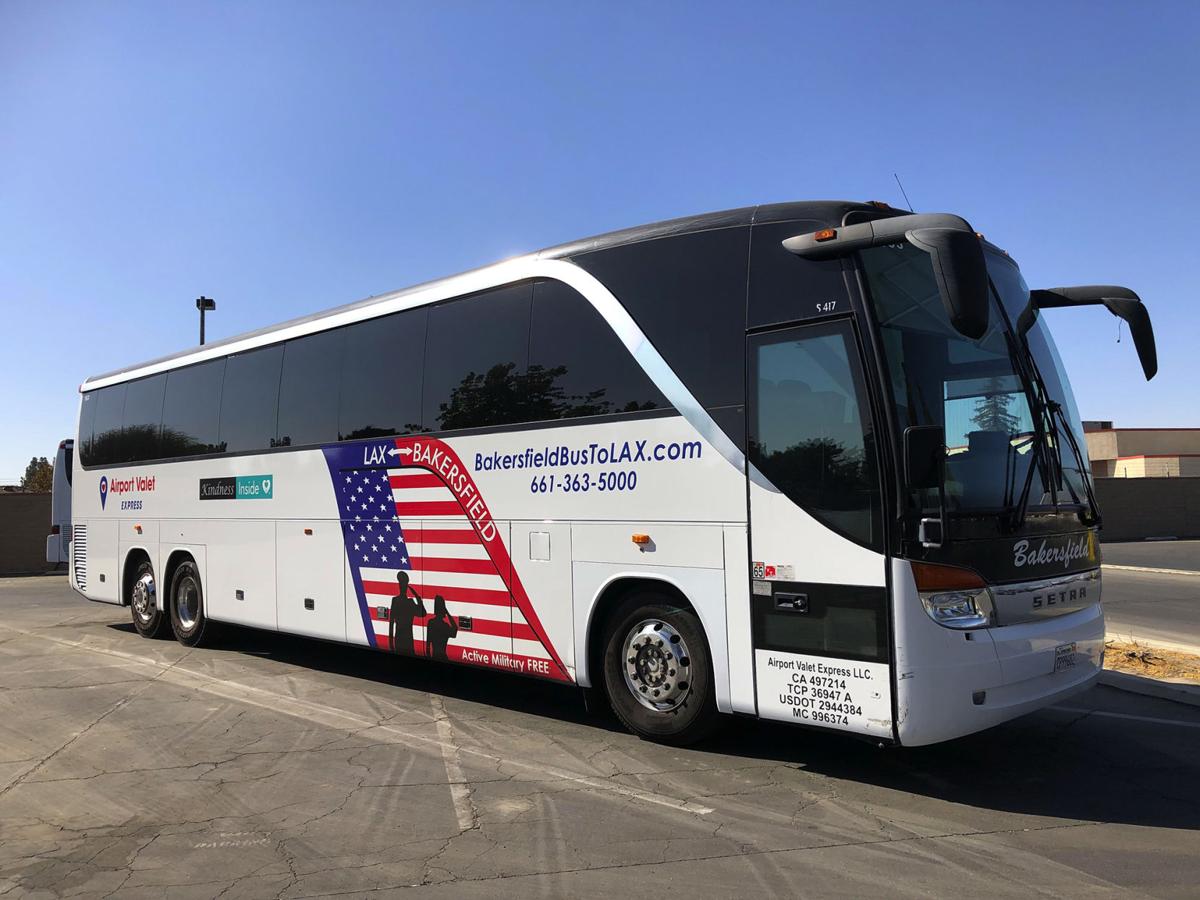 Airport Valet Express makes four round trips every weekday between Bakersfield and Van Nuys, where the Flyaway airport shuttle service carries passengers the rest of the way to Los Angeles International Airport.

Two Greyhound buses are loaded with passengers in this file photo and ready to make a trip in this alley photo with the Padre Hotel in the background. 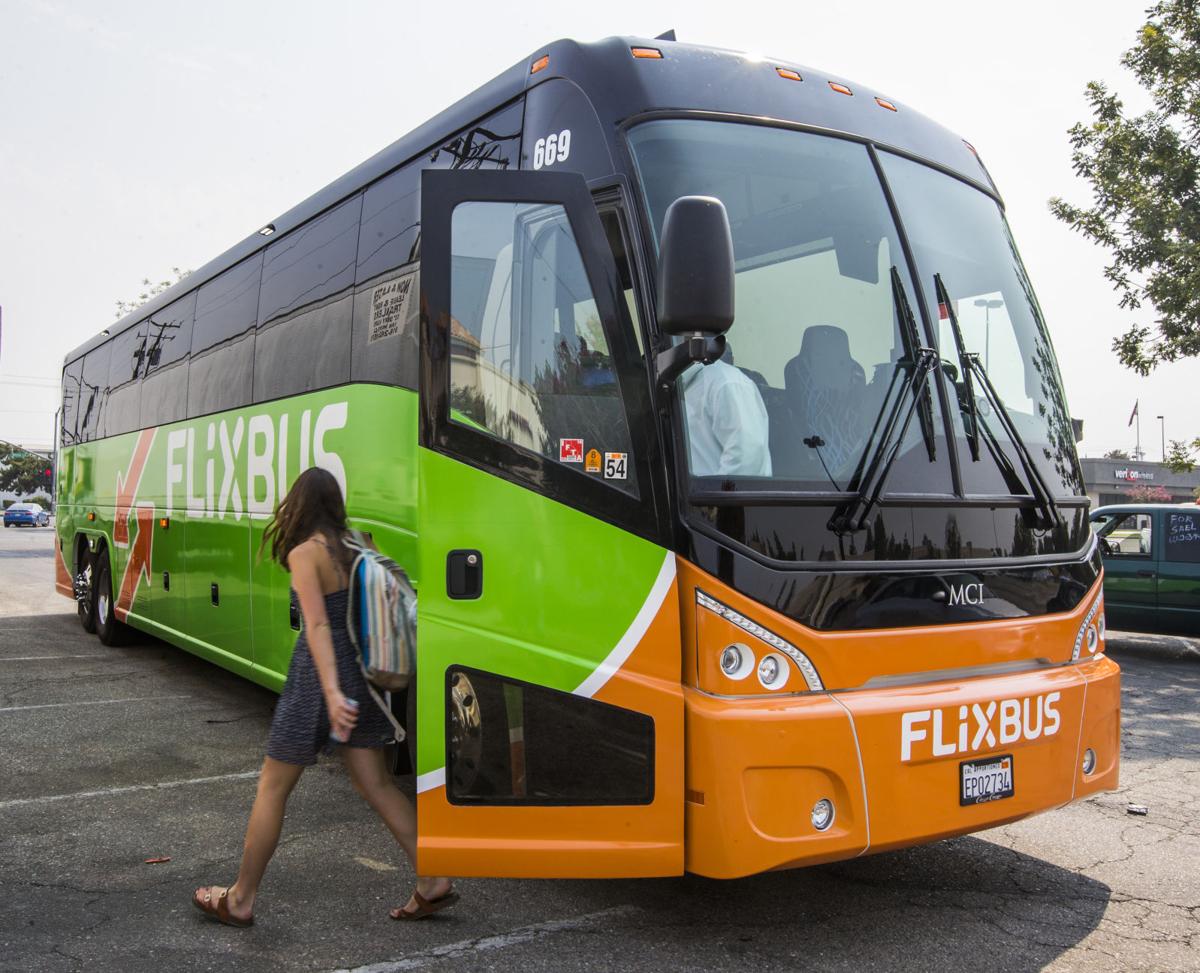 In this file photo, Shani Slabber leaves the Flixbus at the parking lot at 2300 White Lane after making the trip to Bakersfield from Los Angeles. The bus services is based in Europe. 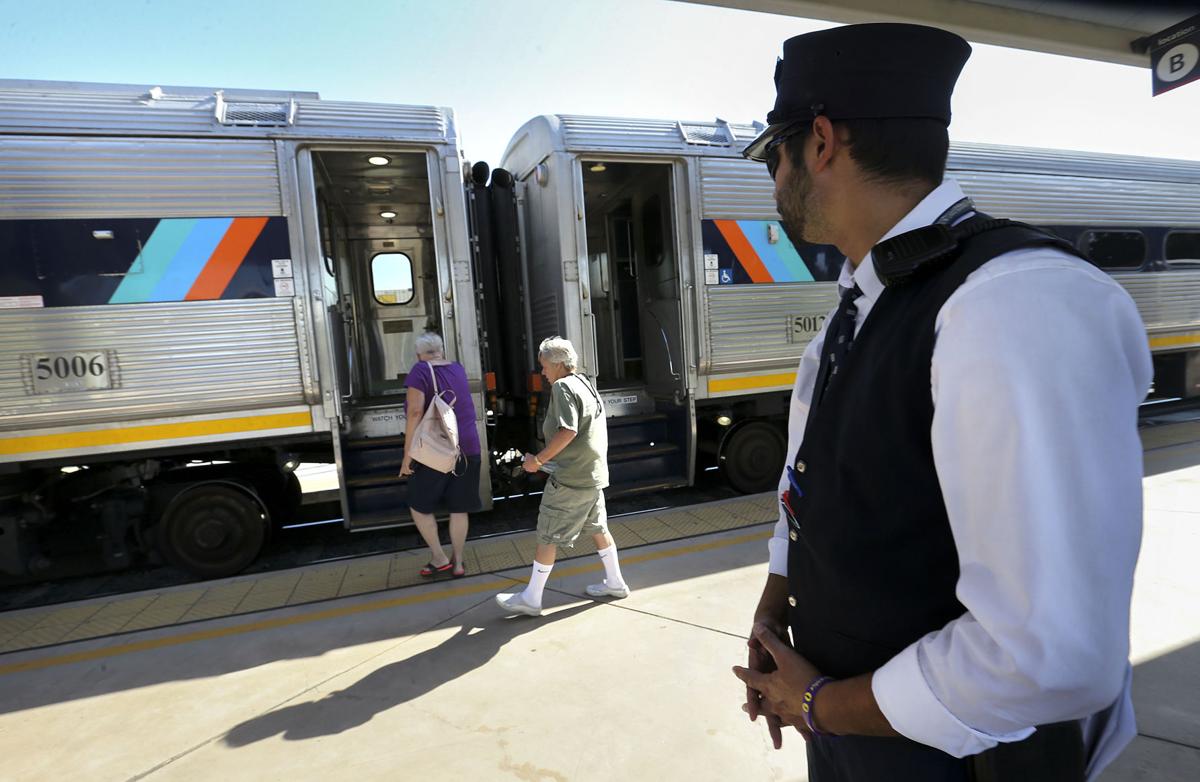 An afternoon Amtrak train prepares to leave Bakersfield in this file photo.

Greyhound Lines offers a nationwide network of bus stations. A passenger arrives in Bakersfield in this file photo.

Airport Valet Express makes four round trips every weekday between Bakersfield and Van Nuys, where the Flyaway airport shuttle service carries passengers the rest of the way to Los Angeles International Airport.

Two Greyhound buses are loaded with passengers in this file photo and ready to make a trip in this alley photo with the Padre Hotel in the background.

In this file photo, Shani Slabber leaves the Flixbus at the parking lot at 2300 White Lane after making the trip to Bakersfield from Los Angeles. The bus services is based in Europe.

An afternoon Amtrak train prepares to leave Bakersfield in this file photo.

There was a time not long ago when the only practical way to take a bus from Bakersfield to the Los Angeles Basin was to "catch the dog." Not anymore.

Greyhound Lines still makes the trip, of course, but now it has competition — from four different services if you count Kern County's 7-month-old commuter route to the Metrolink station in Santa Clarita. An additional, major service provider is expected to start selling tickets between the two cities soon.

That all six services should survive seems to some unlikely, especially if Meadows Field is able to attract additional flights and lure more local flyers who will otherwise continue flocking to Los Angeles International Airport for what are generally less expensive fares.

Then again, having such a diversity of options for southbound bus service available isn't necessarily the point.

One of the region's top transportation planners, Ahron Hakimi, executive director of the Kern Council of Governments, takes the position that it's proper to let travelers decide which operator to give their business to.

Having such service available locally is no minor consideration. More than 20 million people live on the other side of the Grapevine, and for some local residents, L.A. offers employment, business opportunities and shopping.

It's important to note that the existing bus connections between Bakersfield and L.A. — Airport Valet Express, Chennai Express, FlixBus, Greyhound and Kern Transit — are not interchangeable. That is, they exist to serve different purposes.

Airport Valet and Chennai cater to people flying through LAX, while Kern Transit is designed mostly for commuters. The other two are more geared toward general travelers, not local residents making regular trips.

A few years ago, Bakersfield had no service to LAX and no commuter buses to L.A. A company that had run shuttles to the airport had gone out of business and its replacement was short-lived.

Then, in late 2013, Bakersfield businessman Phil Rudnick launched his own service, Airport Valet. His buses have continued to run since then, though in September he changed the route to stop at the Flyaway shuttle service in Van Nuys, which he said regular passengers find convenient.

Earlier this year, Chennai began offering service from Delano and Bakersfield to LAX. Rudnick said he's fine with the competition, even if it means he must eventually bow out. He noted his own passenger count is down from last year.

"If, in fact, we have other companies that are able to provide that kind of service, we welcome it," he said, adding that, if it became financially unfeasible to continue his service, he would look for other uses for the equipment. "This is for the community, not just for me."

Probably the biggest recent development in local bus service is the governor's signature Oct. 8 on a bill, Senate Bill 742, allowing Amtrak to begin selling tickets between Bakersfield and Los Angeles.

Because there are no railroad tracks over the Grapevine, the taxpayer-supported train service has long covered the gap by running buses between the two cities.

The link was never meant to stand alone, however. The company was prohibited from competing with Greyhound by selling tickets specifically for trips between Bakersfield and Los Angeles.

But as many local travelers were aware, tickets could sometimes be bought for a trip between Wasco and Bakersfield, even though passengers often skipped the Wasco part and just got on the southbound bus in Bakersfield.

Amtrak did not immediately respond to a request for information on when it plans to begin selling tickets between Bakersfield and L.A. But Hakimi said he expects the service to start as soon as several months from now.

He said it'll be an improvement in some regards.

"It certainly makes it more convenient (than buying a Wasco ticket)," he said, "and acknowledges what people have been doing in a stealthy sort of way for years."

Airport Valet Express: Launched in late 2013, businessman Phil Rudnick's Bakersfield bus service was revised Sept. 1 to go no farther south than the Flyaway shuttle in Van Nuys that takes passengers the rest of the way to Los Angeles International Airport. On weekdays, buses leave Bakersfield at 3 and 7:30 a.m. and 1 and 6 p.m., while on Saturdays and Sundays, the only departures are at 7:30 a.m. and 6 p.m. Tickets cost $49 each way to Van Nuys, or $39 in advance. (Flyaway charges $10 for the trip to LAX). Website: airportvaletexpress.com. For reservations, call 363-5000.

Chennai Express: Since its Nov. 12 grand opening, this service has taken passengers from Delano to LAX. It departs from 1212 Airport Drive three times daily, at 5 a.m., 10 a.m. and 3 p.m. Two stops are scheduled in Bakersfield, one in Lebec and another in Santa Clarita. Fares cost $70 each way from Delano, or $65 in advance. Website: ceshuttle.com. For reservations, call 800-656-6756.

FlixBus: The Germany-based bus service has offered service in the United States since 2018. It sells tickets from Bakersfield to several destinations in Los Angeles for between $7.99 and $14.99, depending on day and time. Some trips depart downtown Bakersfield as early as 5:10 a.m., though on some days the first bus leaves at 9:50 a.m. The last bus departs downtown Bakersfield at 9:05 p.m. Depending on the date, there may be as few as four trips per day to downtown Los Angeles or as many as six.

AMTRAK (pending): The taxpayer-subsidized train service also known as National Railroad Passenger Corp. was long forbidden from selling tickets between Bakersfield and Los Angeles, where the company uses buses to take riders over the Grapevine as part of a trip that had to include some time on a train. The ban was lifted with the governor's signature on California's Senate Bill 742, which among other things permits Amtrak to offer bus service between Bakersfield and L.A. It remains unclear when the service might launch and how much tickets would cost.

California's high-speed rail agency on Friday finalized a route between Shafter and Bakersfield, allowing it to move forward with acquisition …

I miss Harvey Hall and monopoly-like private delivery of public services. It’s so much more efficient.