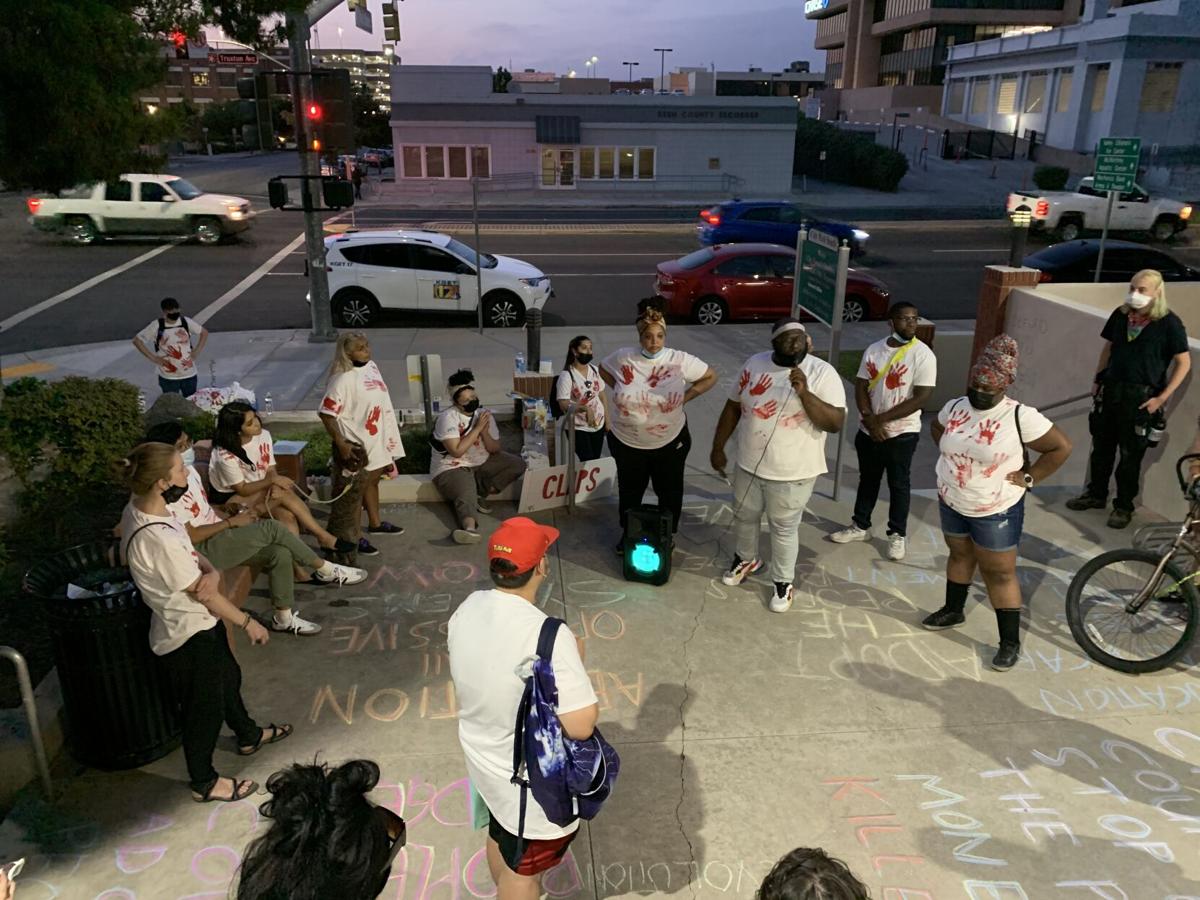 Activists speak after the Bakersfield City Council votes to approve the city of Bakersfield budget Wednesday. 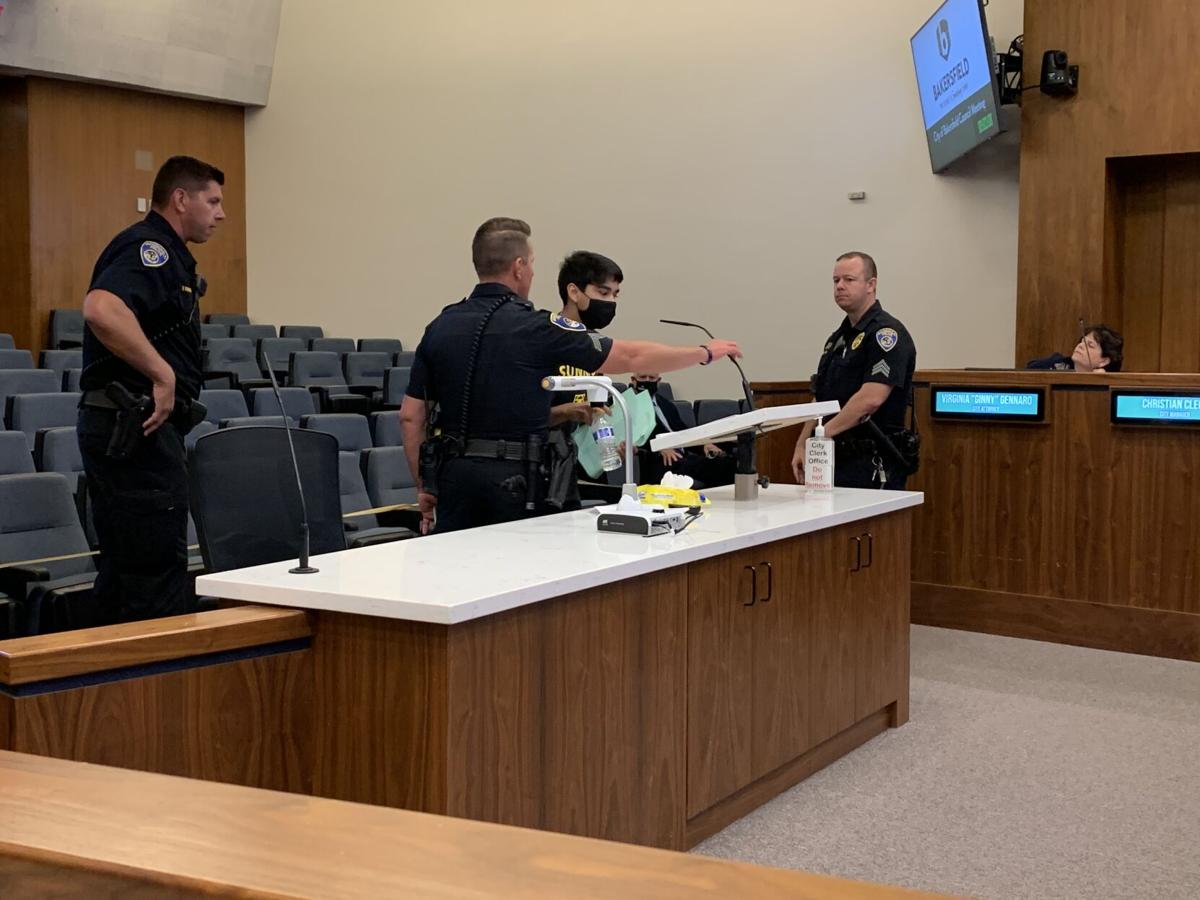 A speaker is confronted by Bakersfield Police Department officers while attempting to speak about the BPD budget during a hearing on water rates as part of the Bakersfield City Council meeting on Wednesday.

Activists speak after the Bakersfield City Council votes to approve the city of Bakersfield budget Wednesday.

A speaker is confronted by Bakersfield Police Department officers while attempting to speak about the BPD budget during a hearing on water rates as part of the Bakersfield City Council meeting on Wednesday.

A heated discussion on the proposed city of Bakersfield budget led to the Council Chambers being cleared Wednesday.

The City Council was set to approve the budget for fiscal year 2021-22, but many showed up to speak against a $13.4 million increase to the Bakersfield Police Department coffers. The budget increases the BPD budget to $133.4 million. BPD takes up around 42 percent of the city’s general fund, the largest amount of any city department.

In fiscal year 21-22, BPD is authorized to add 28 sworn positions and 17 civilian positions, which BPD says are necessary to reduce response times and allow the department to respond to a greater variety of calls.

Members of the business community spoke in favor of adding more officers, along with a few residents.

“We are here tonight to move forward with public safety, addressing the homeless issue and jobs for the city of Bakersfield,” said Nick Hill, president and CEO of the Kern County Black Chamber of Commerce, adding that he was also speaking on behalf of the Kern County Hispanic Chamber of Commerce. “We feel these items are vital for the survival of our city and keeping everyone safe is a matter of public safety”

But during the meeting, some speakers brought attention to the harm officers can sometimes cause. At the beginning of the meeting, 31 people signed up to speak in opposition to raising the BPD budget.

“We want to defund the police because there is a different way to look at safety,” said Faheema Salahud-Din Floyd. “What do you think we’re here for... what you are witnessing is anger that has been multiplied over time.”

A number of speakers wore white T-shirts with red hands plastered on the front, symbolizing the “blood” on the City Council’s hands. Before the meeting, individuals wrote slogans in chalk on the walls and sidewalk in front of City Hall South.

The meeting was generally raucous. At around an hour into the meeting, Mayor Karen Goh ordered the Council Chambers cleared after some members of the audience chanted in support of a person speaking against BPD, which the mayor claimed went against a council policy.

“The one thing that’s consistent,” he said of his interaction with City Council members over time, “is the heartbrokenness that comes with watching each and every one of you. It’s really disappointing to see our elected officials choose to disrespect their constituents on a daily basis.”

For the rest of the meeting, the council only allowed one person to speak at a time.

Police escorted several other people out of the chambers after they attempted to speak during the public comments sections of agenda items unrelated to the police.

City Attorney Ginny Gennaro said Roberts Rules of Order, along with the city’s municipal code, allowed the city to clear the chambers when disruptions occurred as they prevent business from being conducted.

“You can just look at common law,” she said. “You should give at least one warning. The mayor gave two and we cleared the chambers.”

On hand to view the proceedings were members of the American Civil Liberties Union Foundation of Southern California. The ACLU sent a letter to the council on Tuesday, urging the city to allow all speakers to have three minutes to speak, the typical time granted to individuals during a normal meeting.

After the Council Chambers were cleared, Maira Rios, an ACLU legal and advocacy assistant, said what the organization had warned against in the letter had come to pass.

“People who were in favor of the budget were frontloaded tonight,” she said, noting the individuals against the budget were forced to make shorter statements to accommodate a greater number of speakers.

“We’re just concerned with what is fair,” she said.

When there are a large number of speakers on a single topic, the council generally allows 15 minutes for all speakers on that topic. On Wednesday, the council held 15-minute public comment sessions each for individuals in favor of the budget, for miscellaneous topics, people against the budget, and on the BPD budget in particular.

Aside from police, Bakersfield budget funds variety of new projects

The Bakersfield City Council has approved a $683.2 million budget for the next fiscal year, ensuring the continued operation of city services …