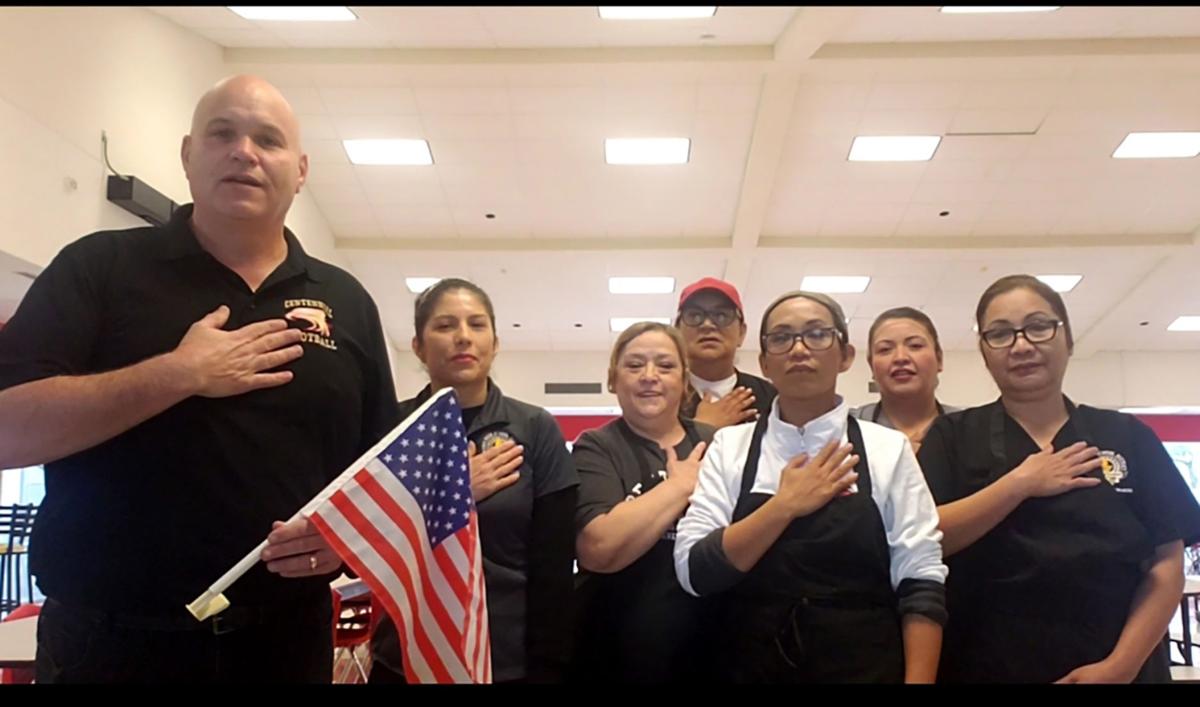 Centennial Athletic Director Tom Haskell, left, and and the lunch-line crew recite the Pledge of Allegiance as part of a series of videos for the school's students, teachers, staff and administrators. 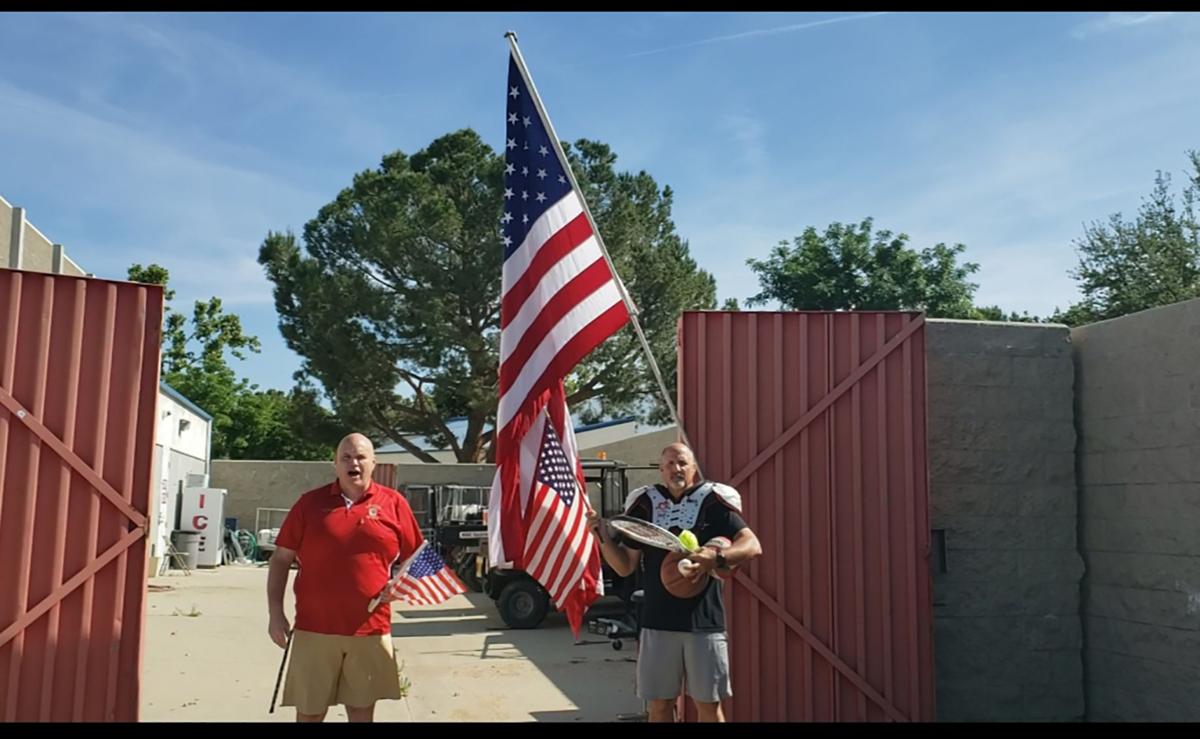 Centennial Athletic Director Tom Haskell, left, and equipment manager Donnie Kessler recite the Pledge of Allegiance as part of a series of videos for the school's students, teachers, staff and administrators. 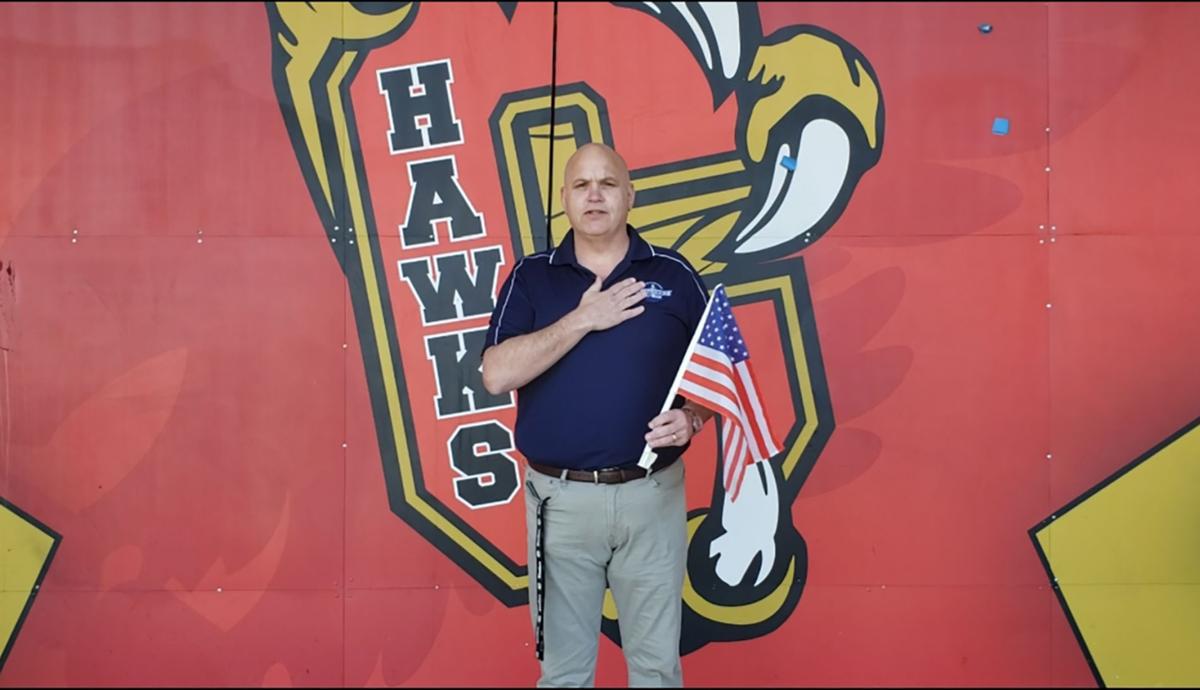 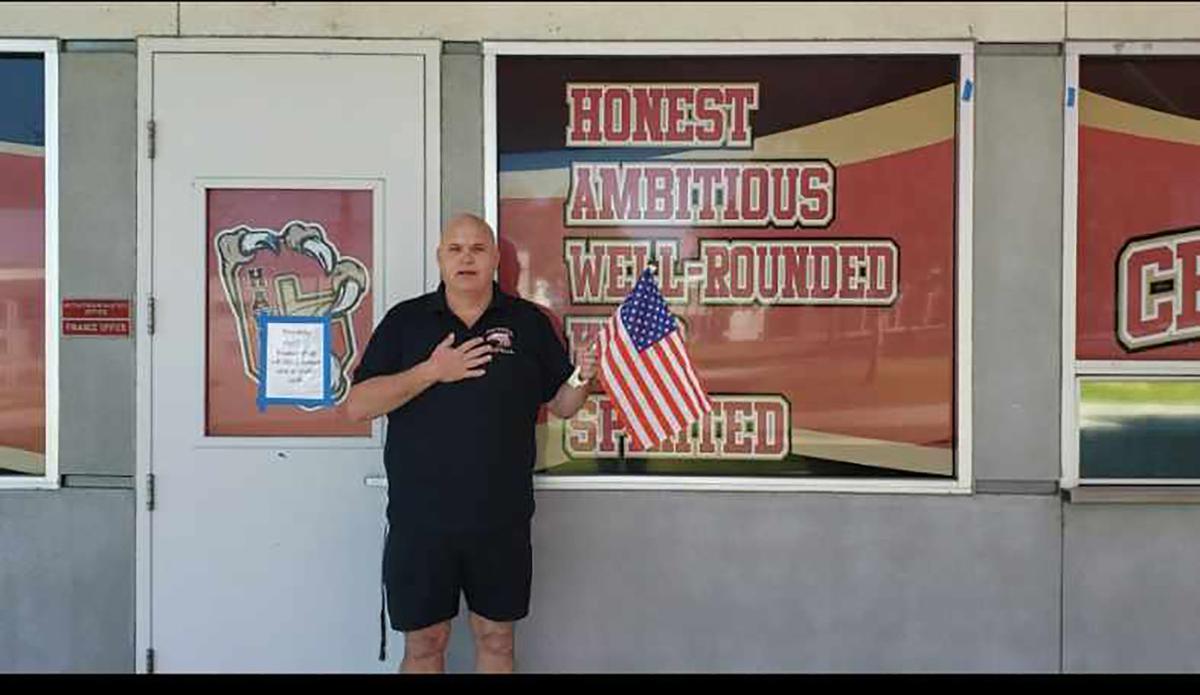 Centennial Athletic Director Tom Haskell, left, and and the lunch-line crew recite the Pledge of Allegiance as part of a series of videos for the school's students, teachers, staff and administrators.

Centennial Athletic Director Tom Haskell, left, and equipment manager Donnie Kessler recite the Pledge of Allegiance as part of a series of videos for the school's students, teachers, staff and administrators.

Faced with school closures and the prospect of working from home, Tom Haskell made an executive decision — and the results have been overwhelmingly positive.

In an attempt to stay connected to his school and its students, faculty and administration, the Centennial High School athletic director hatched a plan to videotape himself reciting the Pledge of Allegiance each morning, and then post it on the school’s Twitter account.

What started as a simple idea has blossomed into a bit of local phenomenon among the Golden Hawks’ faithful, elevating Haskell to a somewhat celebrity status overnight.

“I think it was just looking for something to do,” said Haskell, who has been working at Centennial the past seven years. “I really, really enjoy my job and I was missing it a lot. Not only was it a little bit of medicine for our kids and staff, but it also helped me, even trying to remember what day of the week it is. ... It’s just the fact of getting up and having that routine that I have to do the pledge, and people are now relying on me to do it.”

Haskell started posting videos when area high schools closed due to the COVID-19 pandemic. He's continued ever since — and with style.

Typically clad in a Centennial polo or T-shirt, with an American flag in hand, he’s delivered the pledge from about every location on campus.

From the football stadium, performing arts building, auditorium and classrooms, to his own backyard and beyond. He even posted a pledge video from Pismo Beach while celebrating a social-distancing-conscious 23rd wedding anniversary with his wife.

“It actually brings us hope,” said Karla Morales, a teacher’s aide at Discovery Elementary, whose son is a junior at Centennial. “I remember doing the flag salute every morning when I was in school. You get up in the morning and it’s just something you do and it brings me a sense of normality. I think it’s really nice to see Tom and the staff all participating with him. ... We look for it.”

He closes with: “Stay safe out there G-Hawks. We miss you.”

He tries to post videos to Twitter and his personal Facebook page by 9:35 a.m. each day, the time the pledge would normally be broadcast over the school PA.

He’s also invited some of his co-workers to share the experience, often gathering unsuspecting lunch-line workers, administrators and coaches.

“He’s a great dude and one of my best friends,” said Donnie Kessler, the Golden Hawks’ equipment manager who joined Haskell in one video wearing shoulder pads while holding a variety of sports equipment. “I just can’t say enough about him. He loves Centennial, and he wants to just keep things going, which is pretty cool. It was awesome. When he first did it, I actually stood up and did the pledge with him when I saw it online.”

This week alone, Haskell has recited the pledge in Vice Principal of Administration Chris Sanchez’s office, in front of a backdrop celebrating the class of 2020 with dean's office secretary Nicole Torres, with varsity baseball coach Dan Durham, and as a solo performance in front of the school trophy case.

He even teamed with officers from the Bakersfield Police Department to say the pledge in a yet-to-be released video.

The flag salutes have become so popular, students and teachers started sending requests for specific classrooms or areas of the campus. Haskell devoted time to honor three retiring instructors by reciting the pledge from their empty classrooms.

Early on — and prior to buying a tripod — Haskell had to be creative when delivering the pledge in isolation. During those performances, he’s propped up his cellphone on a drinking fountain or a teacher’s lecture podium. He’s even used a cutout of a batter that the baseball team uses for pitching practice. Haskell managed to wedge his phone between the fake batter’s chin and nose while he recited the pledge from the pitching mound.

“I didn’t do it for any notoriety or anything like that, it was just more that these kids are looking for any type of normalcy, because this definitely isn’t normal for them, it’s not normal for any of us,” Haskell said. “To be at that age where they shouldn't have to worry about stuff like this. Unfortunately they do.”

Haskell’s efforts seem to be hitting the mark for Centennial supporters.

“He’s amazing,” said Arlene Aninion, who's worked with Haskell to promote the David Marcus Thumbs Up Scholarship Foundation in honor of her late brother. “I get the chills just thinking about what Tom is doing. I’m personally a very patriotic person and him being out there every morning, doing the flag salute ... I have to tell you, when I see him do that, I get up and put my hand over my heart and I do the flag salute with him.

“He is a godsend. He is keeping the positivity going in this small little city of Bakersfield. It means a whole lot to me and my family.”

I thought Tom was kinda creepy...

It is truly heart warming and moving to see people pledge Allegiance during this shutdown which has stripped them of their constitutional rights in the most Authoritarian manner. Go USA!

He is a patriot! Bless him.