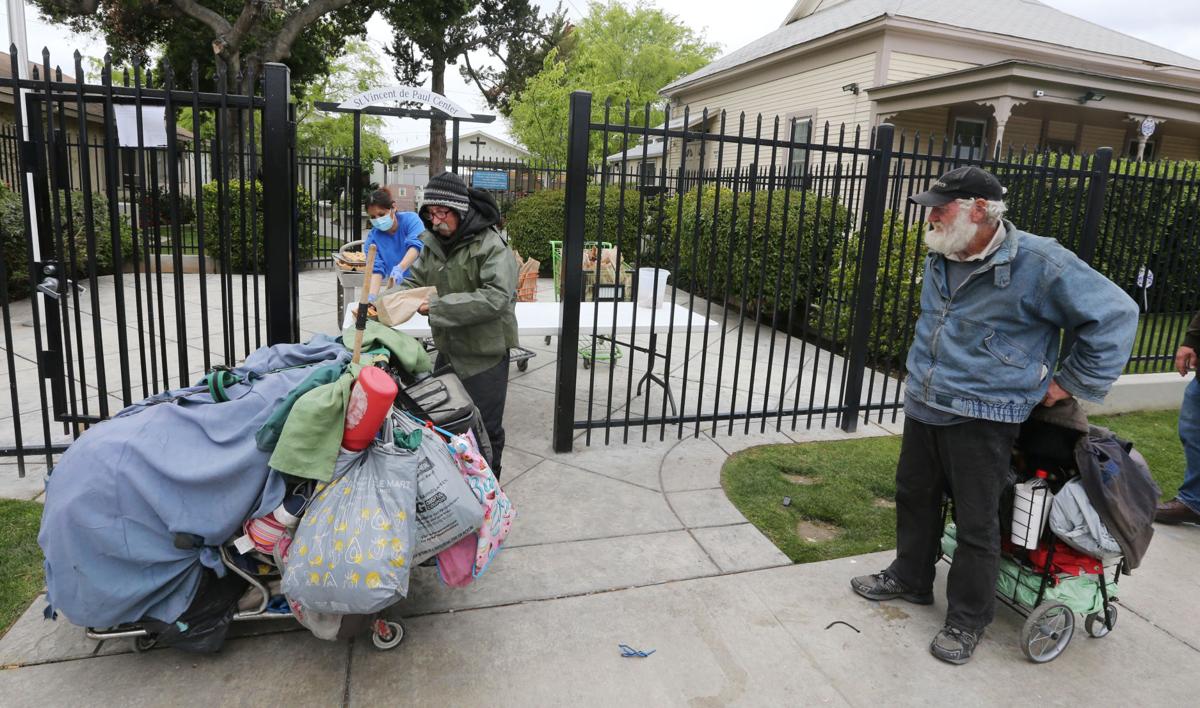 Homeless individuals were asked to practice social distancing when coming up for lunch at St. Vincent de Paul in this March file photo. 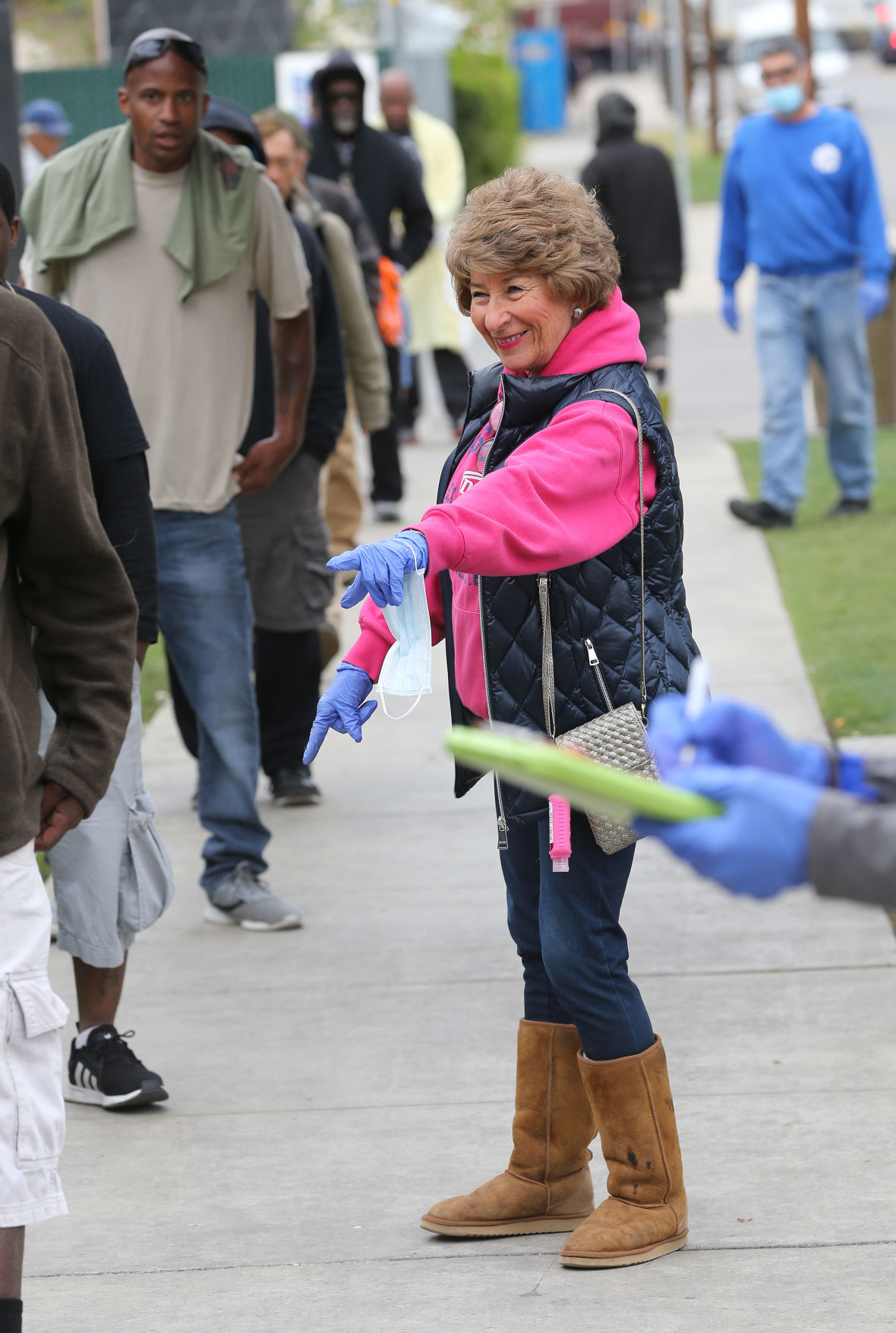 Deborah Leary, chairman of the board at St. Vincent de Paul, asks patrons to space themselves six feet apart on Baker Street during lunch hours in this March 24 file photo. 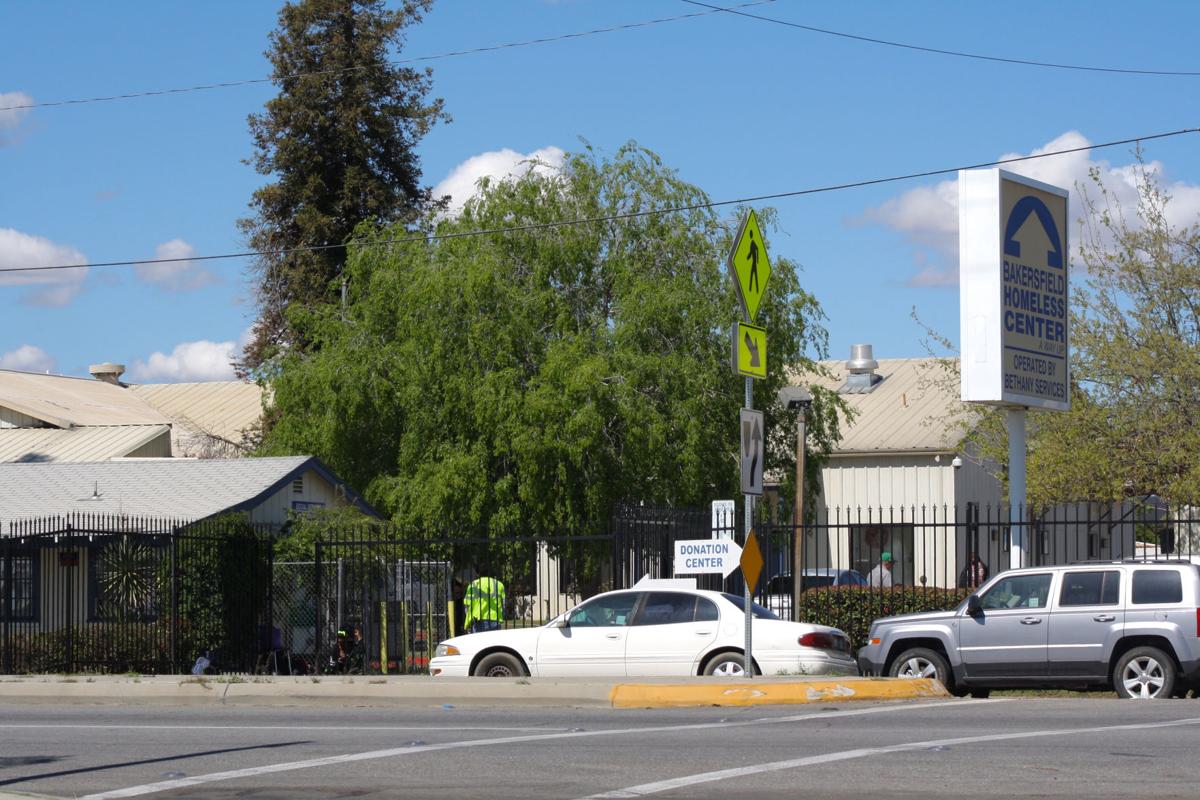 Workers at the Bakersfield Homeless Center monitor the front gate in this March 17 photo.

Homeless individuals were asked to practice social distancing when coming up for lunch at St. Vincent de Paul in this March file photo.

Deborah Leary, chairman of the board at St. Vincent de Paul, asks patrons to space themselves six feet apart on Baker Street during lunch hours in this March 24 file photo.

Workers at the Bakersfield Homeless Center monitor the front gate in this March 17 photo.

After receiving an outpouring of support from the community when the COVID-19 pandemic first struck, St. Vincent de Paul and the Bakersfield Homeless Center’s supplies are beginning to dwindle, bringing concern to their staff.

Deborah Leary, chairwoman of the board at St. Vincent de Paul Bakersfield, said the center's been closed to the public for fourth months. In March, the center put out a call for community donations of various food items for lunches and dinners, as well as goods such as sandwich bags.

After a “wonderful” community response, Leary said the scales have started tipping back as donations decrease.

“In the last 45 to 50 days, our supplies have dried up,” Leary said. “I think people were so good at responding because they thought (the pandemic) was only going to be 30 to 40 days.”

“The community sustained us for four solid months, but the need is still there for our street homeless,” Leary said. “In my wildest dreams I would have never thought (this pandemic) would have gone on this long.”

Donations can be delivered to the center on Baker Street or mailed to P.O. Box 3255, Bakersfield, CA 93385. Leary also said clothing and monetary donations are always welcomed.

Bakersfield Homeless Center CEO Louis Gill said his shelter is also in need of certain items. Things such as masks and other protective equipment are a constant necessity for both clients and staff, Gill said.

He added that hygiene items are currently a critical need for the shelter, especially travel-sized items.

“We used to get a ton of travel-sized soaps and toothpaste, but people aren’t traveling so people aren’t donating those items,” Gill said.

Gill said donations have stopped coming as frequently. He said the center is taking donations at the gate and if groups have large amounts of items to donate, the center can pick them up.

Carlos Baldovinos, executive director of The Mission at Kern County, believes there are outside factors causing any supply shortages at local homeless service providers. He pointed to things such as “donor fatigue” as well as donors experiencing hardships such as losing their jobs.

“I do think our supplies are very cyclical. Things change financially and donors have been put in a tough spot,” Baldovinos said. “It’s not unusual in the summer (for supplies to dwindle). It’ll be interesting to see how people react to the existence of this pandemic moving forward.”

Gill said he's prepared to deal with the pandemic for the long haul, and doesn’t think things will get much easier moving forward.

“This is going to only get more complicated as we have more people that we need to isolate and care for and so we will need our neighbors to be able to (continue helping us),” Gill said.

Anna Laven, executive director of the Bakersfield-Kern Regional Homeless Collaborative, said the collaborative has been monitoring supply levels for homeless service providers on a weekly basis. She said it's top priority to ensure everyone is covered and safe.

“Collaborative members have been taking the safety of employees and clients very seriously from the outset, as they continue to work as essential services throughout this public health crisis,” Laven said.