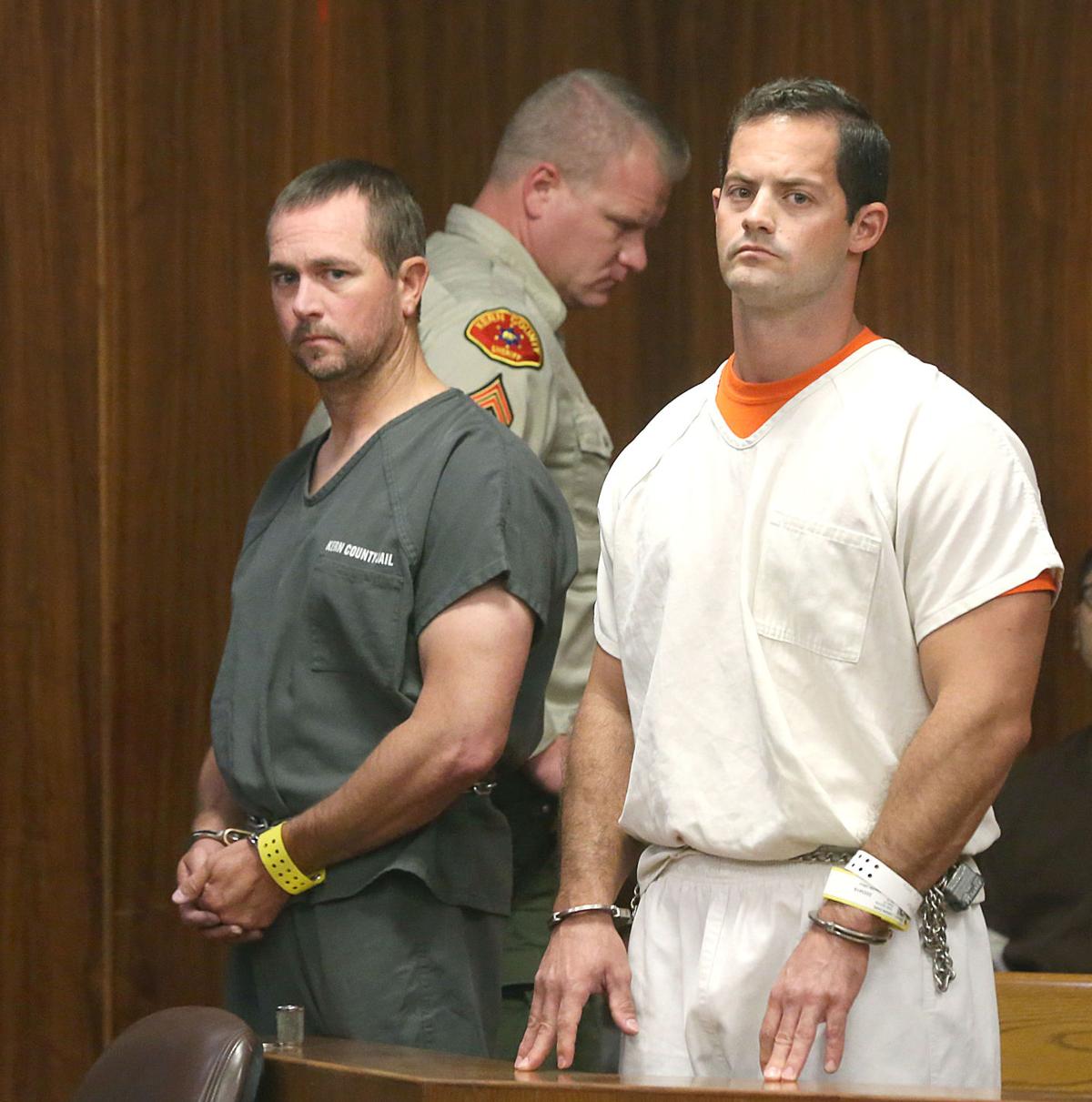 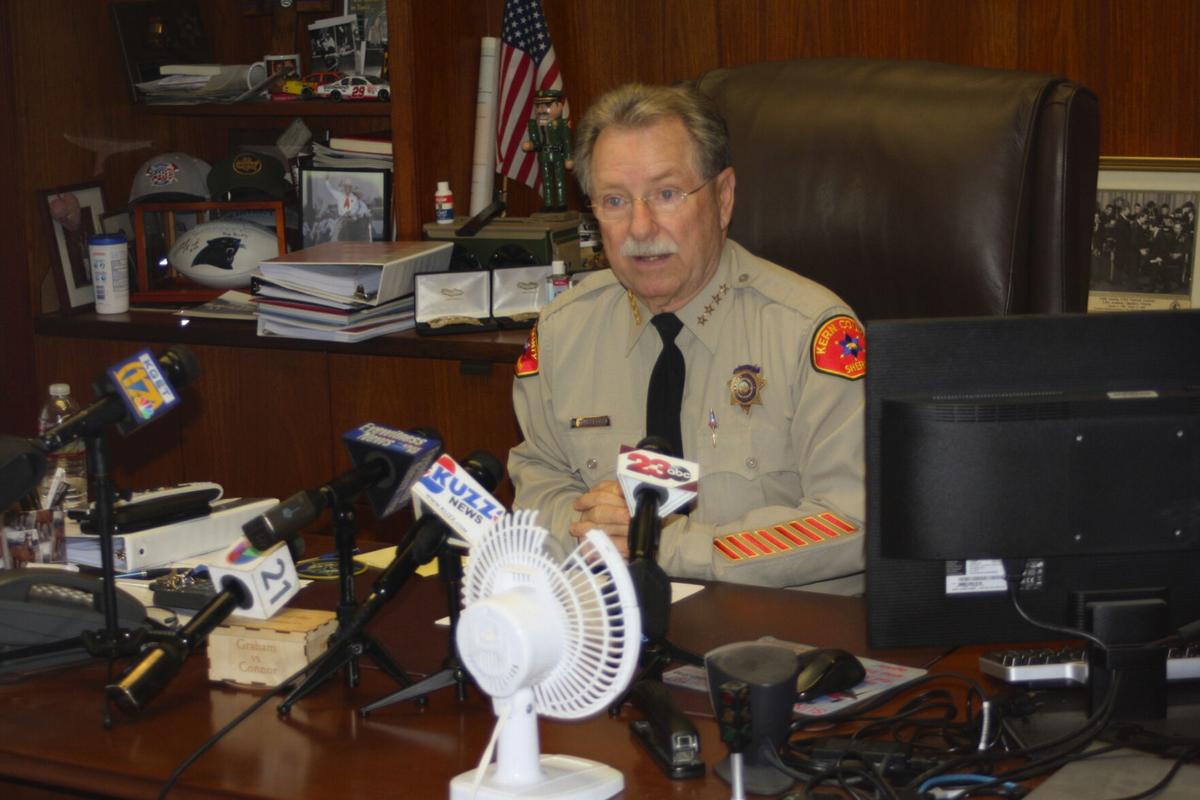 Kern County Sheriff Donny Youngblood speaks at a press conference in his office in this file photo.

Kern County Sheriff Donny Youngblood speaks at a press conference in his office in this file photo.

Two former Kern County Sheriff’s Office deputies pleaded no contest Thursday to felony charges related to stealing more than 350 pounds of marijuana seized by the KCSO in 2015, according to the Kern County District Attorney’s Office.

Former KCSO deputy Logan August entered his plea to all 15 felony charges against him, which included conspiring to commit a crime, second-degree burglary and falsifying a report as a peace officer. August faces a potential prison sentence of upwards of 10 years and will be sentenced by Judge Judith Dulcich on Oct. 13, the DA’s office said in a news release.

Former KCSO deputy Derrick Penney entered his plea to two felony counts of falsifying a report as a peace officer. Penney’s remaining five felony charges were dismissed and he will serve 90 days in custody and be placed on probation, according to the DA’s office.

The new charges against August and Penney are the result of a one-year investigation by the Sheriff’s Office that followed the former deputies’ sentencing in federal court in 2017. Both were sentenced to probation and served no jail time following federal charges of conspiracy to possess with intent to distribute marijuana in August 2017.

On Thursday, Kern County Sheriff Donny Youngblood responded to the announcement at a news conference in his office.

“I certainly hope that the judge does the right thing and treats these two officers — former officers — as they should be treated and give them the appropriate sentence, and I think that will probably happen,” Youngblood said.

Youngblood said August and Penney have not been employees with the Sheriff’s Office for “four or five” years. He said they were initially on paid administrative leave as “short of a time” as they possibly could be.

“Once we (have the evidence that they violated policies and procedures), we try and expedite that exit as quickly as we possibly can,” Youngblood said.

The KCSO’s investigation was launched by Cmdr. Erik Levig in conjunction with District Attorney Investigator Don Krueger to learn the “true extent” of any crimes committed, according to the DA’s office.

During the KCSO’s investigation, three destruction orders were found for 357 pounds of marijuana — with a street value of $450,000 — that were removed by August and were signed off by Penney, Youngblood said. He said 60 officers were interviewed during the investigation, including August and Penney.

August had no authority or legitimate purpose to remove the seized marijuana from the KCSO’s property room, according to the DA’s office. The investigation confirmed that August never attempted to have the marijuana disposed of — which is a closely monitored process — and the location of the marijuana was never discovered, the DA's news release said.

“These false forms and reports might have been noticed by a supervising deputy if they had not been signed for approval in the KCSO computer system by Penney,” the DA’s office said in its news release.

Youngblood said the situation was initially “frustrating and embarrassing” when the department learned of August and Penney’s crimes. However, he said he became “very proud” of the KCSO as the investigation ensued.

“(The investigation) became much more palatable as we went along as other officers in the organization stepped up and said, ‘We need to look at this, we need to audit that,’ because the last thing any officer that is worth their salt wants in law enforcement is another officer that is corrupt,” Youngblood said.

Youngblood said the KCSO has made changes to its property room, but said they fully understand if an officer wants to be corrupt they will probably find a way to do so.

“It’s our job to try and weed those people out. We do a pretty good job,” Youngblood said. “It’s not a perfect science. Throughout our agency we’ve had some blips along the way, but we handle them as they come and we handle them appropriately.”

And does that knowledge bring you any joy?